Q.1. (i) What is development ? Mention any two features of development.
(ii) What is national income ? [CBSE 2009 (D)]
(iii) What is per capita income? [CBSE Sept. 2011]
Or
Define the term, â€˜average income.’ [CBSE 2008, 2009 (D)]
Ans. (i) Development is a comprehensive term which include increase in real per capita income, improvement in living standard of people, reduction in poverty, illiteracy, crime rate, etc.
Features
(a) Different persons have different developmental goals.
(b) Income is a major component of development.
(ii) National income is defined as the total value of all the goods and services produced within a country plus net income coming from abroad.
(iii) When the total national income is divided by the total population, it is called the per capita income.
Per Capita Income =  National Income /  Population

Q.2. (f) State the criteria used to compare the different countries by the Human Development Report published by the United National Development Programme (UNDP).
(ii) Which is the new area of knowledge in which scientists, economists, philosophers and other social scientists are working together ?
(iii) What is meant by Human Development ? [CBSE Sept. 2011, 2012]
(iv) What is Sustainable Development ? [CBSE Comp. (D) 2008, 2009 (F), Sept. 2011]
(v) Which organisation measures HDR ? Mention any three major indicators of / HDR. [CBSE Sept. 2012]
Ans. (i) Per capita income, life expectancy at birth, literacy rate and other basic necessities like clean drinking water, sanitation etc.
(ii) Sustainability of development.
(iii) It is the process of enlarging people’s choices as well as raising the level of well ¬being so that they can lead a purposeful and a creative life. Though the national income and the per capita income are the indicators of human development, but it includes many other elements like consumption, health, environment, education, freedom, security, non-violent atmosphere, etc.
(iv) Sustainable Development is that process of economic development which aims at maintaining the quality of life of both the present and the future generations without harming the natural resources and environment.
(v) UNDP :
(a) Educational level
(b) Health status
(c) Per capita income

Q.3. (i) Mention any two important aspects of our lives other than income. [CBSE 2008 (D)]
(ii) How can we achieve our hopes and possibilities in the present world ? [CBSE Comp. (D) 2008]
(iii) What is â€˜Public Distribution System ‘ (PDS) ? [CBSE Sept. 2011 ] [CBSE2009 (F) Sept. 2010]
(iv) Mention two developmental goals of landless rural labourers. [CBSE Comp. (O) 2008]
(iv) Why has Kerala a higher Human Development Index than Punjab in spite of low per capita income ? [CBSE 2009 (F) Sept. 2011]
Ans. (i) Health and Education.
(ii) Through Democratic political process.
(iii) It is a system through which the Government distributes ration to the poor at a reasonable rate through the ration shops.
(iu) (a) More days of work and better wages.
(b) Quality education for the children.
(v) (a) Because it has low infant mortality rate, (b) It has higher literacy rate.

Q.5. Describe any three features of developed country. [CBSE 2013, 14]
Ans. (i) As per the World Bank Report 2012 any country with per capita income of US$ 12,276 per annum and above is termed as rich or developed country. ‘
(ii) Such countries have high literacy rate.
(iii) Most of the people of these countries are engaged in service sector.

Q.6. What is PCI ? Where it is used ?
Ans. PCI is Per Capita Income. It is calculated by dividing the National Income of the country by population.
Uses :
(i) It is used to compare different countries.
(ii) The World Bank has divided the countries into rich or low income countries on the basis of per Capita income.

Q.7. What are the development goals of the following :
(i) Labourer (ii) Rich farmer (iii) Trader 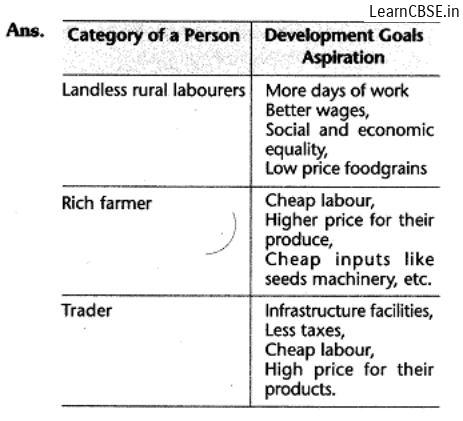 Q.10. What contributes to the human development ?
Ans. There are many economic as well as non economic factors which contribute to the human development.
(i) Living a long and a healthy life.
(ii) To have education, information and knowledge.
(iii) Enjoying a decent standard of living.
(iv) Enjoying basic fundamental rights like freedom, security, education, etc.
(v) To have equality and enjoyment of human rights.

Q-11. What is the significance of Human Development Index ? [CBSE 2013]
Ans. (i) HDI is used to measure level of development of a country.
(ii) It has been published by UNDP and according to it countries has been ranked.
(iii) It is a comprehensive approach which cover all the major aspects of life.
(iv) Apart from income, education, health status, life expectancy, etc., are considered for measuring economic development of a nation.

Q.13. â€˜Money cannot buy all the goods and services that one needs to live well.’ Explain. [CBSE 2010(0), Sept. 2013]
Ans. (i) Money or material things that one can buy with it is one factor on which our life depends. But the quality of our life also depends upon non-material things like equal treatment, freedom, security, respect of others, etc.
(ii) Money cannot buy us a pollution free environment, unadulterated medicines, peace, etc.
(iii) There are many facilities like schools, colleges, parks, hospitals which an individual cannot afford. All these are to be provided by the government/society.
(iv) Money possessed by an individual even can not provide us a type of government which take decisions for the welfare of the common people.

Q.16. Besides income, what can be the other attributes to compare economic development? [CBSE 2013, 14]
Ans. (1) Of course, for comparing economic development of countries, their income is considered to be one of the most important attributes. This is based on the understanding that more income means more of all things that human beings need. That is why, the World Bank uses Per Capita Income to compare economic development.
(2) Apart from income, educational levels of the people and their health status are considered as measures to compare economic development of a nation.
(i) Infant Mortality Rate (IMR) : This indicates the number of children that die before the age of one year as a proportion of 1,000 live children born in that particular year. ‘
(ii) Literacy Rate : This measures the proportion of literate population in the 7 years and above age group.
(iii) Net Attendance Ratio : This is the total number of children of age group 6-10 attending school as a percentage of total number of children in the same age group.
(iv) Life Expectancy at birth : It denotes average expected length of life of a person at the time of birth.