Q.1.What was the role of trade guilds ? Explain.
Ans. (i) Trade guilds were associations of producers that trained craft people, maintained control over production, regulated competition and prices
(ii)They enjoyed monopoly rights to produce and trade in specific products
(iii) They also had the right to restrict the entry of new producers into the trade.

Q.2.The proto-industrialisation helped in building a close relationship between the town and the countryside”. Explain.
Ans.(i) Merchants were based in towns but the work was done mostly in the countryside by the peasant households.
(ii) A merchant clothier in England purchased wool from a wool stapler, and carried it to the spinners: the yarn (thread) that was
spun was taken in subsequent stages of production to weavers, fullers, and then to dyers.
(iii) The finishing was done in London before the export merchant sold the cloth in the international market.

Q.3. During the first World War years, industrial production in India boomed. Give reasons.
Ans. (i) Manchester imports into India declined as British mills were busy with war production.
(ii) Indian industries were also called upon to supply war needs ;Jute bags, doth for the army uniform, tents and leather boots (iii) Even after the war. Manchester failed to recapture its old position. 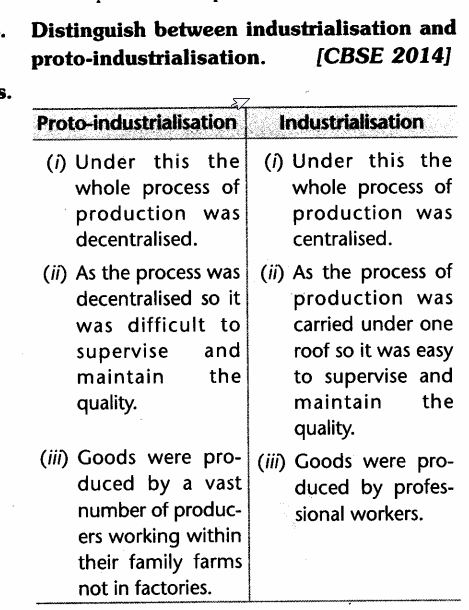 Q.5. Who created the cotton mill ? How did it help in improving the production ?
Ans. Richard Arkwright had created the Cotton mill.
(i) The costly machines could be purchased, set up and maintained in the mills.
(ii) Within the mills, all the processes were brought together under one roof and managed. This allowed a more careful supervision over the production process, a watch over quality and the regulation of labour, all of which had been difficult to do when the production was in the countryside.

Q. 6. What were the problems of Indian weavers at the early 19th century ? [CBSE 2009 (O). Sept. 2010. 2011)
Or
Explain the miserable conditions of Indian weavers during the East India Company’? regime in the eighteenth century.  [CBSE 200S IF). Sept. 2010) Or
Describe any four impacts of Manchester imports on the cotton weavers of India. [CBSE Sept. 2011)
Ans. (i) Collapse of local and foreign market :
Due to industrialisation in Britain, their export market collapsed.
As British traders started exporting machine- made clothes to India, so their local market shrank.
(ii) Shortage of raw material : As raw cotton was being exported to England, there was a shortage of raw materials.
When the American Civil War broke out. and the cotton supplies from the United States were cut off. Britain turned to  India. As raw cotton exports Iron India increased, the price of raw cotton shot up Weavers in India were starved of supplies and forced to buy raw cotton at higher prices.
(iii) Clashes with Gomasthas : Gomasthas were appointed by the government to supervise weavers to collect supplies and examine the quality of cloth. The Gomasthas acted arrogantly and punished weavers for delays in supply. So. the weavers dashed with them.
(iv) System of advances: The Britishers started the system of advances to regularise the supply of cotton and cloth. The weavers eagerly took the advances, in a hope to cam more but they faded to do so They even started losing small plots of land which they had earlier cultivated.

Q.7. Write a short note on the development of factories in India.
Or
Explain the growth of factories in India.
Ans.(i) Cotton and jute mills were the first to be established in India The first cotton mill was set up in 1854 at Bombay Mumbai (ii) By 1864. the number rose to four The textile null was followed by the jute mill which came into existence in 1855 in Bengal.
(iii) Another jute mill was established in 1862 in Bengal itself.
(iv) In North India, the Elgin Mill was started in Kanpur in the 1860s. and a year later, the first cotton mill of Ahmedabad was set up
(v) By 1874. the first spinning and weaving mill of Madras (Chennai) began is production.

Q.9.Explain the major features of pre colonial trade and industries.
Ans. (i) Major good: Before the age of machine industries, silk and cotton goods from India dominated the international market in textiles Coarser cottons were produced in many countries, but the finer varieties often came from India
(ii) Trading partners: Armenian and Persian merchants took the goods from Punjab to Afghanistan. eastern Persia and Central Asia. Bales of fine textiles were carried on camel back via the north-west frontier, through mountain passes and across deserts.
(iii) Major ports: A vibrant sea trade operated through the main pre-colonial ports. Surat cn the Gujarat coast connected India to the Gulf and Red Sea Ports Masulipatam on the Coromandel coast and Hoogly in Bengal had trade links with Southeast Asian ports.

Q.10.What was the impact of colonisation of India on the Indian traders and merchants ?
Ans.  (i) By the 1970s this network, controlled by Indian merchants, was breaking down.
(ii)The European companies gradually gained power – first securing a variety of concessions from local courts, then the monopoly rights to trade. This resulted in a decline of the old ports of Surat and Hoogly through which local merchants had operated. Exports from those ports fell dramatically, the credit that had financed the earlier trade began drying up and the local banker slowly went bankrupt.
(iii)While Surat and Hoogly decayed. Bombay and Calcutta grew This shift from the old ports to the new ones was an indicator of the growth of colonial power Trade through the new ports came to be controlled by European companies, and was carried in
European ships. While many of the old trading houses collapsed, those that wanted to survive had to now operate within a network shaped by European trading companies.

Q.11. Name the provinces where most of the large-scale industries were located. How can you say that small-scale production continued to predominate even in the late 20th century ?
Ans. Bengal and Bombay (Mumbai)
(i) Only a small proportion of the total industrial labour force worked in registered factories. i.e. only 5 per cent.
(ii) There was an expansion in the handicraft industries.
(iii) In the 20th century, handloom cloth production expanded steadily, i.e. almost trebling between 1900 and 1940.

Q.12. In the 20th century, the handloom cloth production expanded steadily, i.e.. almost trebling between 1900 and 1940.’ Give reasons.
Or
What led to expansion In handloom craft production between 1900 and 1940 ? [CBSE Sept. 2010]
Ans. (i) Handicrafts producers adopted a new technology which helped in improving the production without excessively pushing up the costs
(ii) By the second decade of the Twentieth century, most of the weavers started using looms with a fly shuttle. This increased productivity per worker, speeded up production, and reduced the labour demand. By 1941. over 35 per cent of handlooms in India were fitted with fly shuttles: in regions like Travancore,Madras (Chennai) Mysore, Cochin and Bengal where the proportion was 70 to 80 per cent.
(iii) There were several other small innovations that helped weavers to improve their productivity, and compete with the mill sector.

Q.14. Why was East India Company keen on expanding textile exports from India during the 1760 ? Explain any three reasons. [CBSE 2013]
Ans. (i) Consolidation of the Fast India Company’s power after the 1760s did not initially lead to a decline in textile export from India.
(ii) British cotton industries had not yet expanded.
(iii) Fine Indian textiles were in great demand in Europe.

Q.16. Mention any five restrictions imposed by the British government upon the Indian merchants In the 19th century. [CBSE 2011]
Ans. (i) The spare within which Indian merchants could function, became limited.
(ii) They were barred from Trading with Europe in manufactured goods.
(iii) They had to export mostly raw materials and foodgrains ,raw cotton, opium, wheat and indigo required by the British.
(iv) They were gradually edged out of the shipping business.
(v) Till the First World War,European Managing Agencies controlled a large sector of Indian industries.

Q.17. “Certain group of weavers were in a better position than others to survive the competition with mill industries-. Explain. [CBSE 2014]
Ans. (i) Producers of coarse cloth: Amongst weavers some produced coarse cloth while others wove finer varieties. The coarser cloth was bought, by the poor and its demand fluctuated violently. In times of bad harvests and famines when the rural poor had little to eat. and their cash income disappeared, they could not possibly buy cloth.
(ii) Producers of finer varieties: The producers of finer varieties were in a better position because the demand for the finer varieties bought by the well- to-do was more stable. The rich could buy these even when the poor starved. Famines did not affect the sale of Banarasi or Baluchari saris. Moreover, as you have seen, mills could not imitate specialised weavers. Saris with woven borders, or the famous lungis and handkerchiefs of Madras, could not be easy displaced by mill production.

Q.18. Who was a jobber ? Explain his functions. [CBSE 200S. Sept. 2010. 2011. 2012} Or
Why was a jobber employed ? How did jobber misuse his position and power ? Explain. (CBSE 2013]
Ans. Getting lobs was always difficult, even when mills multiplied, and the demand tor workers increased. The numbers seeking work wore always more than the jobs available. Entry into the mills was also restricted. Industrialists usually employed a jobber to get new recruits. Very often, the jobber was an old and trusted worker. He got people from his village, ensured them jobs, helped them settle in the city, and provided them money in times of crisis. The jobber, therefore, became a person with some authority and power. He begun demanding money and gifts for his favour, and began. controlling the lives of the workers.

Q.19. Why could Britain not recapture her hold on the Indian market after the Rrst World War ? Explain. [CBSE 2009 (F)]
Or
Explain the impact of the First World War on Britain’s economy ? [CBSE Sept. 2010.2011]
Ans. . During the war British mills were busy in war production to meet the needs of the army, Manchester’s imports into India declined.
(ii) After the war. Manchester could never recapture its old position in the Indian marker. Unable to modernise and compete With the United States. Germany and Japan,the economy of Britain crumbled after she war. Cotton production collapsed, and exports of cotton cloth from Britain fell dramatically.
(iii) Within the colonies, local industrialists gradually consolidated the:: position, substituting foreign manufactures and capturing the home market.