Question-2
Draw the structure of neuron and explain its function.
Solution: 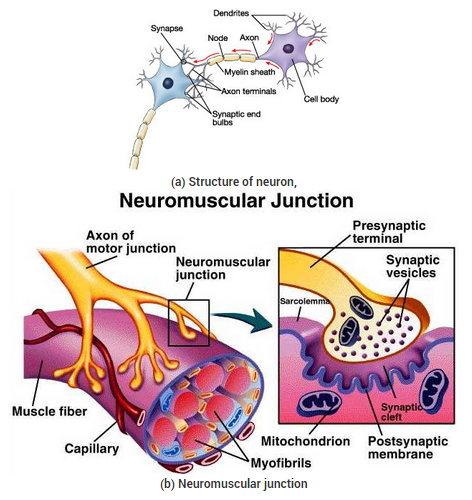 The specialised tips of some nerve cells detect all information from our environment. These receptors are usually located in our sense organs, such as the inner ear, the nose, the tongue, and so on. So gustatory receptors will detect taste while olfactory receptors will detect smell. This information, acquired at the end of the dendritic tip of a nerve cell, sets off a chemical reaction that creates an electrical impulse. This impulse travels from the dendrite to the cell body, and then along the axon to its end. At the end of the axon, the electrical impulse sets off the release of some chemicals. These chemicals cross the gap, or synapse, and start a similar electrical impulse in a dendrite of the next neuron. This is a general scheme of how nervous impulses travel in the body. A similar synapse finally allows delivery of such impulses from neurons to other cells, such as muscles cells or gland. It is thus no surprise that nervous tissue is made up of an organized network of nerve cells or neurons, and is specialised for conducting information via electrical impulses from one part of the body to another.

Question-3
How does phototropism occur in plants?
Solution:

Phototropism is a growth movement induced by a light stimulus. Growth towards a source of light is called positive phototropism, that away from the source is termed negative phototropism. The tips of shoots are usually positively, that of roots negatively phototropic.
Charles Darwin and his son Francis discovered (in 1880) that the phototropic stimulus is detected at the tip of the plant.
The Darwins used grass seedlings for some of their experiments. When grass seeds germinate, the primary leaf pierces the seed coverings and the soil while protected by the coleoptile, a hollow, cylindrical sheath that surrounds it. Once the seedling has grown above the surface, the coleoptile stops growing and the primary leaf pierces it.
The Darwins found that the tip of the coleoptile was necessary for phototropism but that the bending takes place in the region below the tip.
If they placed an opaque cover over the tip, phototropism failed to occur even though the rest of the coleoptile was illuminated from one side.
However, when they buried the plant in fine black sand so that only its tip was exposed, there was no interference with the tropism – the buried coleoptile bent in the direction of the light.
From these experiments, it seemed clear that

Question-4
How does chemical coordination occur in plants?
Solution:
It has been found that the growth of plants is regulated by certain chemical substances which are synthesized by the plants in very small amounts. These are known as plant hormones or phytohormones.

They are the organic substances which either promote or inhibit growth. A phytohormones can be defined as a chemical substances which are produced naturally in plants and are capable of translocation and regulating one or more physiological processes when present in low concentration. Main categories of plant hormones are:

Question-5
What is the need for a system of control and coordination in an organism?
Solution:
Co-ordination in this sense refers to the regulation or control of body activity.
Plants need very little in the way of a control system. Since growth and reproduction are about the only things that are regulated, a rapid control system is not required and hormonal control is all they possess.

Animals are continually moving through new environments that may pose all types of changes and threatening situations to the organism. This requires the rapid and precise control of a nervous system. Hormones regulate slower activities, such as growth, development and reproduction.

Reflex actions are done to meet emergencies where as an inv.action may or may not be for just meeting an emergency but may be a critical lie process as circulation of blood, swallowing of food, movement of food in food pipe, etc.