Question 4. What are homologous structures? Give an example. Is it necessary that homologous structures always have a common ancestor?
Answer. Homologous organs are those organs which have the same basic structural design and developmental origin but have different functions and appearance. Example: The forelimb of a frog, a lizard, a bird and a man seem to be built from the same basic design of bones, but they perform different functions.
Yes, it is necessary that homologous structures always have a common ancestor in order to carry out the different activities. Otherwise there cannot be any similarity in basic plan, internal structure, development or origin.

Question 5. Does the occurrence of diversity of animals on earth suggest their diverse ancestry also? Discuss this point in the light of evolution.
Answer. Diversity of animals does not mean that they have diverse ancestry because common ancestry greatly limit the extent of diversity. If the animals are inhabiting in the same habitat their evolution by speciation and geographical isolation is also not likely. Animals having a common ancestor have developed new traits forming various groups of animals.

Question 10. Evolution has exhibited a greater stability of molecular structure when compared with morphological structures. Comment on the statement and justify your opinion.
Answer. There is immense diversity in size, form, structure and morphological features in the living world. At the molecular level, these diverse types of organisms exhibit similarity of the basic bio molecules like DNA, RNA, carbohydrates, proteins, etc.

Question 11. Study the following cross and showing self-pollination in Flf fill in the blank and answer the question that follows (Q12, Q13 and Q14): 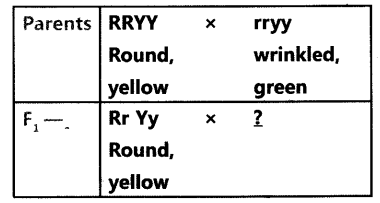