Question 3. Name the mirror that can give an erect and enlarged image of an object.
Answer: When an object is placed between the pole and the principal focus of a concave mirror, the image formed is virtual, erect, and enlarged. 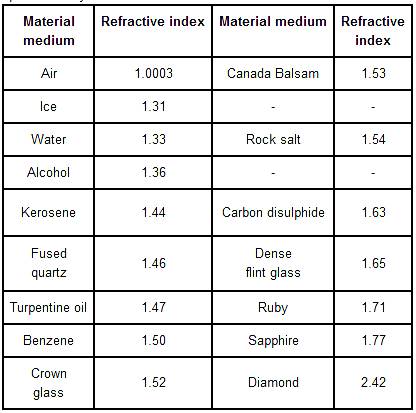 Question 4. You are given kerosene, turpentine and water. In which of these does the light travel fastest?
Answer:

The light can travel fast through water.

Question 3. Find the power of a concave lens of focal length 2 m.
Answer: 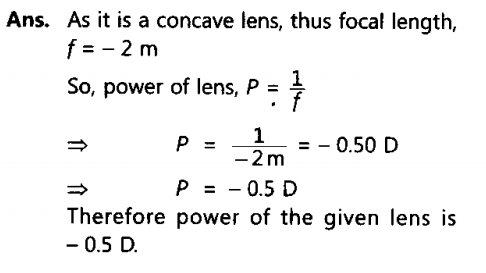 Question 1. Which one of the following materials cannot be used to make a lens?
(a) Water (b) Glass
(c) Plastic (d) Clay
Answer: (d) Clay

Question 7. We wish to obtain an erect image of an object, using a concave mirror of focal length 15 cm. what should be the range of distance of the object from
the mirror? What is the nature of the image? Is the image larger or smaller than the object? Draw a ray diagram to show the image formation in this
case.
Answer:
We are given the focal length cf the concave mirror as f = -15cm.
For getting an erect image using a concave mirror, the object should be placed at a distance less than the focal length.
i.e. 15 cm from the pole. The image formed will be virtual, enlarged and erect. 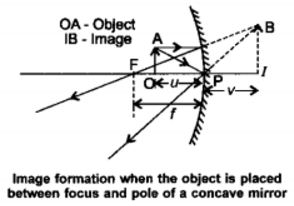 Question 8. Name the type of mirror used in the following situations.
(a) Headlights ofa car
(b) Side/rear-view mirror of a vehicle
(c) Solar furnace
Support your answer with reason.
Answer: (a) Concave mirror, to get powerful and parallel beams of light.
(b) Convex mirror because it always gives an erect image and enables the driver to view much larger area.
(c) Concave or parabolic mirror because it can concentrate sunlight at the focus to produce heat in the solar furnace.

Question 9. One  half of a convex lens is covered with a black paper. Will this lens produce a complete image of the object? Verify your answer experimentally. Explain your observations.
Answer: Yes, even when one half of the lens is covered with a black paper, complete image of the object will be formed. Take a convex lens and focus the light from a distant object onto a screen. As expected an image (sharp) is formed at a distance equal to the focal length Cover the lower or the upper half of the lens and focus the light from the same object onto the same screen. You will be able to get a sharp image again; however the brightness of the image will be less in the second case. The same effect w,ll be seen even if the lens is half covered with black strips.

Question 10. An object 5cm in length is held 25cm away from a converging lens of focal length 10 cm. Draw a ray diagram and find the position, size and the nature of the image formed.
Answer: 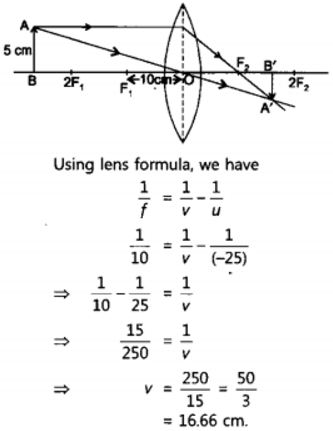 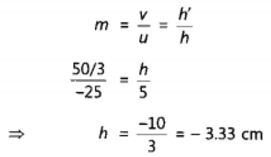 Therefore, the mage ¡s formed between F2 and 2F2 on the other side of the lens. It is real and inverted, and smaller in size than the object.

Question 11. A concave lens of focal length 15 cm forms an ¡mage 10 cm from the lens. How far is the object placed from the Pens? Draw the ray diagram.
Answer: 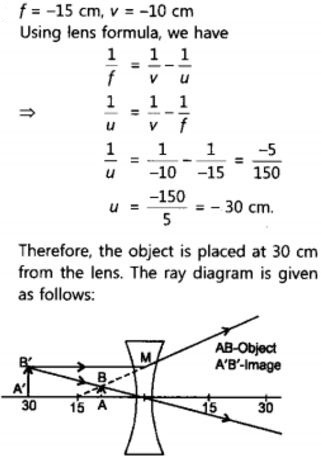 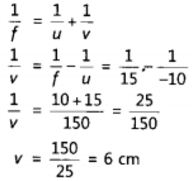 The image must be virtual and erect.

Question 13. The magnification produced by a plane mirror is +1. What does this mean?
Answer: This means that size of the image is equal to the size of the object.

Question 14. An object 5.0 cm in length Is placedat a distanc, of 20 cm in front of a convex mirror of radius of curvature 30 cm. Find the position of the image nature and size.
Answer: 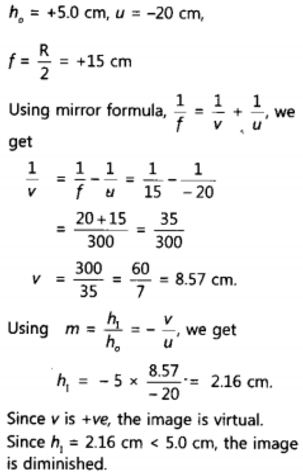 Question 15. An object of size 7.0 cm is placed at 27 cm in front of a concave mirror of focal length 18 cm. At what distance from the mirror should a screen be placed, so that a sharp focused image can be obtained? Find the size and the nature of the image.
Answer: 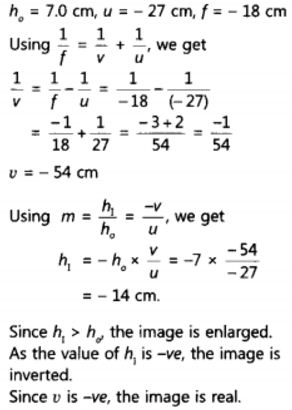 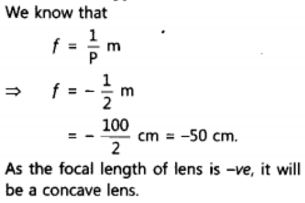 Question 17. A doctor has prescribed a corrective lens of power +1.5 D. find the focal length of the lens. Is the prescribed lens diverging or converging?
Answer: