Question 2. How does the creation of variations in a species promote survival ?
Answer: Natural selection selects the individuals having useful variations which ensure their survival in the prevailing conditions of environment. Variant individuals that can withstand or cope with prevailing environment will survive better and will increase in number through differential reproduction.

Page 147
Question 1. How do Mendel’s experiments show that traits may be dominant or recessive ?
Answer: Mendel took pea plants with contrasting characteristics â€” tall plant and dwarf (short) plant. On cross pollination, he got all tall plants in F1 generation. Then by self pollination of F1 tall plants, he produced second generation (F2) consisting of tall and short plants in the ratio of 3 : 1. Then he concluded that, ‘T’ (tall) trait is dominant while ‘t’ trait for shortness is recessive.

Question 2. How do Mendel’s experiments show that traits are inherited independently ?
Answer:  In a dihybrid cross made by Mendel, it was observed that when two pairs of traits or characters were considered; each trait expressed independent of the other. Thus, Mendel was able to propose the Law of Independent Assortment which says about independent inheritance of traits.

Answer:  No. This information is not sufficient to determine which of the traits âˆ’ blood group A or O âˆ’ is dominant. This is because we do not know about the blood group of all the progeny.Blood group A can be genotypically AA or AO. Hence, the information is incomplete to draw any such conclusion.

Question 4. How is the sex of the child determined in human beings?

Answer:  The females carry two X-chromosomes. Females produce one type of gametes (eggs) with same type of chromosomes (22 + X). Males have one X and one Y- chromosome. Among the male gametes, half of the sperms carry X-chromosome (22 X) and half
carry Y-chromosome (22 + Y). Thus, female is homogametic and male is heterogametic. When a sperm carrying X- chromosome fertilises an egg, the zygote develops into female (XX condition). When sperm carrying Y-chromosome fertilises an egg, the zygote develops into a male (XY condition). Thus, sex is determined at the time of fertilisation.

Question 1. What are the different ways in which individuals with a particular trait may increase in a population ?
Answer:  Different ways are : variation, natural selection and genetic drift (isolation).

Question 2. Why are traits acquired during the lifetime of an individual not inherited ?
Answer:  Because acquired characters bring changes only in non-reproductive tissues and cannot change the genes of the germ cells. Thus, acquired traits cannot be passed to next generation.

Question 3. Why are the small numbers of surviving tigers a cause of worry from the point of view of genetics ?
Answer:  (i) If any natural calamity occurs and kills these small number of surviving tigers, they can become extinct resulting in the loss of some genes forever.
(ii) Small number will lead to little recombination and, therefore, lesser variations. These both are very important for giving better survival chances to the species.
(iii) Less number of species means lesser extent of diversity and lesser number Of traits which reduces the chances of adaptability with respect to the change in the environment.

Question 3. Will geographical isolation be a major factor in the speciation of an organism that reproduces asexually ? Why or why not ?
Answer:  No, because asexual reproduction involves single parent or organism.

Question 1. Give an example of characteristics being used to determine how close two species am in evolutionary terms ?
Answer:  Homologous organs, analogous organs and vestigial organs help to identify evolutionary relationships amongst the species.

Question 3. What are fossils ? What do they tell us about the process of evolution ?
Answer:  Fossils are the impression or remains of ancient life found preserved in the sedimentary rocks. Fossils are direct evidences of evolution. Fossils also help to identify evolutionary relationship between apparently different species. They also tell about the extent of evolution that has taken place.

Page 158
Question 1. Why are human beings who look so different from each other in terms of size, colour and looks said to belong to the same species ?
Answer:  They look different because of interaction of genes with environment which results in change in their appearance. But they belong to the same species as they have same number of chromosomes and can breed among themselves.

Question 2. In evolutionary terms, can we say which among bacteria, spiders, fish and chimpanzees have a ‘better body design’ why or why not ?
Answer:  No, because different designs are the product of evolution and different species have different body design to suit or adapt to their environment.

Question 1. A Mendelian experiment consisted of breeding tall pea plants bearing violet flowers with short pea plants bearing whfte flowers. The progeny all bore violet flowers, but almost half of them are short. This suggests that the genetic make-up of the tall parent can be depicted as
(a) TTWW (b) TTww
(c) TtWW (d) TtWw
Answer: (c) Genetic make-up of tall plant can be depicted by TtWW.

Question 2. An example of homologous organs is
(a) our arm and a dogs fore-leg.
(b) our teeth and an elephants tusks.
(c) potato and runners of grass.
(d) All of the above.
Answer: (d) Both organs in all options have same basic structural design but have different functions and appearance.

Question 3. In evolutionary terms, we have more in common with
(a) a Chinese school-boy.
(b) a chimpanzee.
(c) a spider.
(d) a bacterium.
Answer: (a) A Chinese school-bpy is also a human being.

Question 4. A study found that children with light-coloured eyes are likely to have parents with light-coloured eyes. On this basis, can we say anything about whether the light eye colour trait is dominant or recessive? Why or why not?
Answer: We can say that light eye colour trait is dominant because only dominant traits are expressed in the first generation.

Question 6. Explain the terms analogous and homologous organs with examples.
Answer: Analogous organs are those organs which have different basic structural designs and developmental origins but have similar appearance and perform similar functions.
Examples: Wings of an insect and wings of a bat.
Homologous organs are those organs which have the same basic structural design and developmenta’ origin but have different functions and appearance.
Examples: Forelimbs of frog and forelimbs of human.

Question 7. Outline a project which alms to find the dominant coat colour in dogs.
Answer: A homozygous black (RB) male dog and a homozygous white (bb) female dog is taken and given to mate and produce offspring in F1 generation. If black colour is dominant out of every 4 dogs, 3 will be black and if white colour is dominant 3 out of 4 dogs will be white. 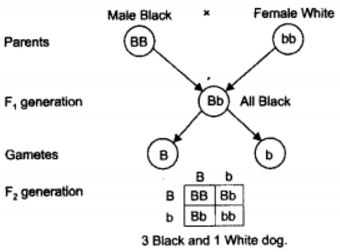 Question 8. Explain the importance of fossils in deciding evolutionary relationships.
Answer: Fossils and their study is useful to know about the species which are no longer alive. They provide evidence and missing links between two classes. They are helpful in forming a sequence of organisms in the pathway of evolution. Thus, fossils have importance in deciding evolutionary relationships.

Question 9. What evidence do we have for the origin of life from inanimate matter?
Answer: Stanley L. Miller and Harold C. Urey provided evidence regarding origin of life from inanimate matter. They assembled an atmosphere similar to that existed on early earth. The atmosphere had molecules like ammonia, methane, hydrogen sulphide and water, but no oxygen. The mixture was maintained at a temperature just below 100â—¦C and sparks were passed through the mixture of gases. At the end of a week, 15% carbon from methane had been converted to simple compounds of carbon like aminoacids which make up protein molecules. So, life arose afresh on earth.

Question 10. Explain how sexual reproduction gives rise to more viable variations that asexual reproduction. How does this affect the evolution of those organisms that reproduce sexually ?
Answer:  Variations occurring during sexual reproduction may be due to:
(i) Separation of homologous chromosomes (by chance only) during gamete formation.
(ii) Crossing over (recombination) of homologous chromosomes.
(iii) Fertilisation of gametes to form zygote.
(iv) Errors during DNA copying or mutations. In asexually reproducing organisms only errors during DNA copying or mutations cause variations.
Since the extent of variations is much larger in sexually reproducing organisms, therefore, the chances of evolution is also much in sexually reproducing These variations enable the organisms to adapt themselves to the changing conditions and also help to face the struggle for Over the time, they and rise to new species.

Question 11. How is the equal genetic contribution of male and female parents ensured in the progeny?
Answer:  Genetically organisms are of types
(i) Haploid : They have single set of chromosomes, where each chromosome is represented singly. As the chromosomes are the bearer of genes so haploids have single set of genes. A single gene determines the expression of character.
(ii) Diploid : ‘They have two sets Of homologous chromosomes, where the chromosome occur in pair, one maternal contributed by the mother through her ovum and the second Of the pair is contributed by the male parent through his sperm. The resultant cell zygote produces by the fusion of male and female gametes have two sets of chromosomesâ€” each set contributed’ by each parent. In diploids a character is controlled by two genes/factors. Both the father and mother contribute practically equal amount of genetic material to the child. It means that each trait can be influenced by both paternal and maternal DNA.