Q.2. Explain the overlapping and cross-cutting differences. [CBSE Sept. 2012]
Or
Explain the cross-cutting differences with suitable examples. [CBSE 2012]
Ans. • Overlapping differences : These social divisions take place when some social differences overlap with many other differences.
• The difference between the Blacks and Whites becomes a social division in the United States because historically, most of the Blacks are poor, homeless and discriminated against.
• In India, the Dalits tend to be poor and landless. They often face discrimination and injustice.
• These kinds of situations produce social divisions which are harmful for democracy, and weaken the basic foundation of democracy.
• When one kind of social difference becomes more important than any other, and people start feeling that, they belong to different communities then this can lead to the disintegration of the country.

Cross-cutting differences :
• Under cross-cutting differences, people share common interests on one issue but are likely to be on different side on another issue.
• Cross-cutting social differences are easier to accommodate.
• Netherlands and Northern Ireland are Christian countries divided into Catholics and Protestants.
• In Netherlands, class and religion tend to cut across each other. This means Catholics and the Protestants are about equally likely to be poor or rich.
• In Northern Ireland, class and religion overlap with each other, i.e., if one is Catholic, he is also more likely to be poor.

Q.3. “The combination of politics and social divisions is very dangerous and explosive. It can make social divisions into political divisions and lead to conflict, violence or even disintegration of a country.”Justify. [CBSE 2008, 2013]
Or
Explain with special reference to Northern Ireland the ways in which social divisions have resulted in violent and bitter ethno-political conflict. [CBSE 2013]
Ans. (i) Let us take the case of Northern Ireland that we referred to above. This region of the United Kingdom has been for many years the site of a violent and bitter ethno-political conflict. Its population is divided into two major sects of Christianity: 53 per cent are Protestants, while 44 per cent are Roman Catholics.
(ii) The Catholics were represented by Nationalist parties who demanded that Northern Ireland be unified with the Republic of Ireland, a predominantly Catholic country whereas the Protestants were represented by Unionists who wanted to remain with the UK, which is predominantly protestant.
(iii) Hundreds of civilians, militants and security forces were killed in the fight between Unionists and Nationalists and between the security forces of the UK and the Nationalists.
(iv) It was only in 1998, that the UK government and the Nationalists reached a peace treaty after which the latter suspended their armed struggle.
(v) Political competition along religious ending ethnic lines led to the disintegration of Yugoslavia into six independent countries.

Q.4. â€˜Three factors are crucial in deciding the outcome of politics of social divisions.’ Explain. [CBSE Sept. 2010]
Ans. (i) People’s perception : This is the most important factor which decides the outcome of politics of social divisions. If people see their identities in singular and exclusive terms, it will lead to social divisions and violence. As long as, people in Ireland saw themselves as only Catholic or Protestant, their difference prevailed.
It is much easier if the people see that their identities are multiple and are complementary with the national identity. A majority of Belgians now feel that they are as much Belgian nationalist or citizens as they are Dutch or German speaking. This feeling binds them together. Thoughâ€”India is a multi-cultural country, but the feeling of nationalism binds us together.
(ii) Raising of demands by political leaders : The outcome of politics of social division also depends on how political leaders raise the demands of any community. It is easier to accommodate demands that are within the constitutional framework and are not at the cost of another community.
The Sinhalese leaders of Sri Lanka wanted to fulfil their demand at the cost of other communities, and this led to the civil war. In Yugoslavia, the leaders of different ethnic communities presented their demands in such a way that these could not be accommodated within a single country.
(iii) Reaction of Government : The outcome also depends on how the government reacts to the demands of different groups. If the rulers are willing to share power and accommodate the reasonable demands of minority community, social divisions become less threatening for the country. But if they try to suppress such a demand with force and in the name of national unity, this can lead to civil war or division of country, and that is what happened in Sri Lanka. 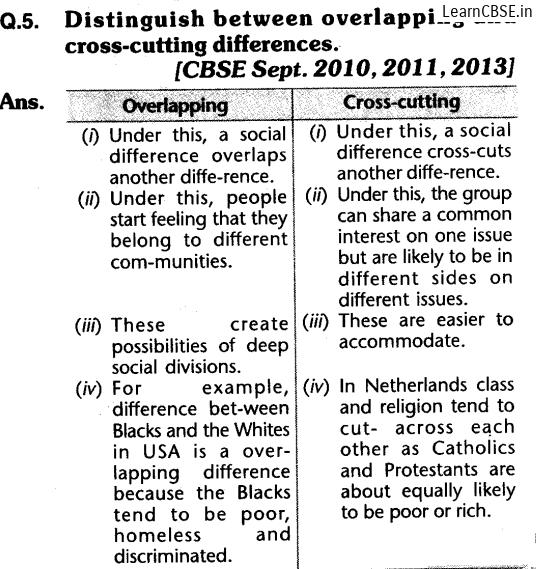