Question 8. 1. Answer the following:
(a) You can shield a charge from electrical forces by putting it inside a hollow conductor. Can you shield a body from the gravitational influence of nearby matter by putting it inside a hollow sphere or by some other means?
(b) An astronaut inside a small spaceship orbiting around the Earth cannot detect gravity. If the space station orbiting around the Earth has a large size, can he hope to detect gravity?
(c) If you compare the gravitational force on the Earth due to the Sun to that due to the Moon, you would find that the Sun’s pull is greater than the Moon’s pull. (You can check this yourself using the data available in the succeeding exercises). However, the tidal effect of the Moon’s pull is greater than the tidal effect of Sun. Why?
Answer:  (a) No. Gravitational forces are independent of medium. A body cannot be shielded from the gravitational influence of nearby matter.
(b) Yes. If the size of the spaceship is extremely large, then the gravitational effect of the spaceship may become measurable. The variation in g can also be detected.
(c) Tidal effect depends inversely on the cube of the distance, unlike force which depends inversely on the square of the distance. Since the distance of moon from the ocean water is very small as compared to the distance of sun from the ocean water on earth. Therefore, the tidal effect of Moon’s pull is greater than the tidal effect of the sun.

Question 8.3. Suppose there existed a planet that went around the Sun twice as fast as the Earth. What would be its orbital size as compared to that of the Earth?
Answer:

Question 8. 8. A comet orbits the Sun in a highly elliptical orbit. Does the comet have a constant (a) linear speed (b) angular speed (c) angular momentum (d) kinetic energy (e) potential energy (f) total energy throughout its orbit? Neglect any mass loss of the comet when it comes very close to the Sun.
Answer:  (a) The linear speed of the comet is variable in accordance with Kepler7s second law. When comet is near the sun, its speed is higher. When the comet is far away from the sun, its speed is very less.
(b) Angular speed also varies slightly.
(c) Comet has constant angular momentum.
(d) Kinetic energy does not remain constant.
(e) Potential energy varies along the path.
(f) Total energy throughout the orbit remains constant.

Question 8. 10. In the following two exercises, choose the correct answer from among the given ones: The gravitational intensity at the centre of a hemispherical shell of uniform mass density has the direction indicated by the arrow (see Fig.)
(i) a, (ii) b, (iii) c, (iv) 0. 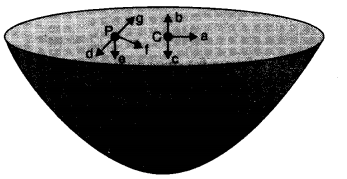 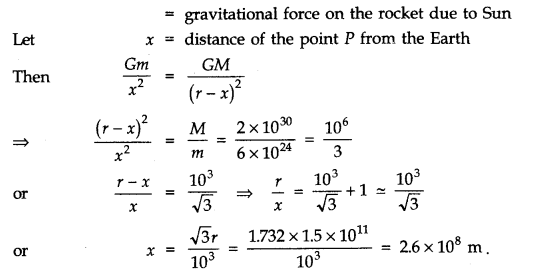 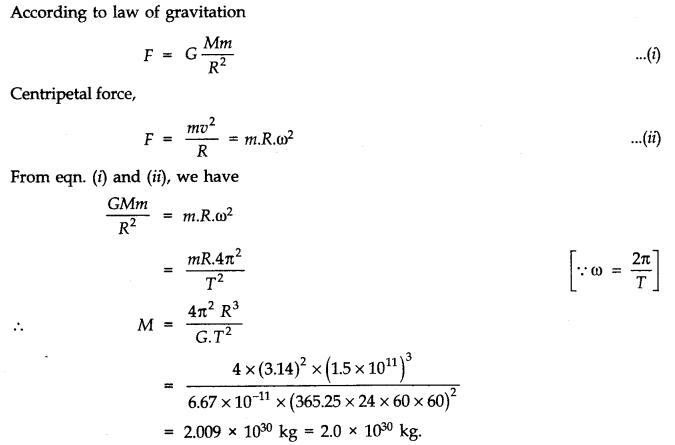 Question 8. 16. Assuming the earth to be a sphere of uniform mass density, how much would a body weigh half way down to the centre of the earth if it weighed 250 N on the surface?
Answer: 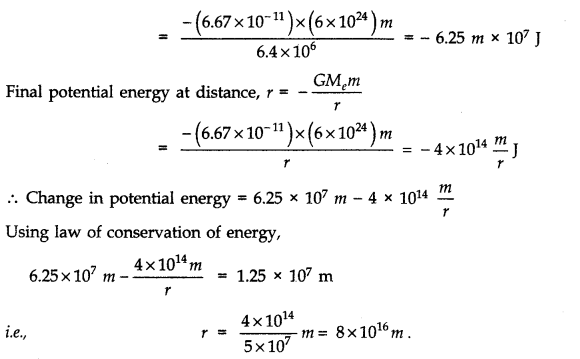 Question 8. 18. The escape speed of a projectile on the Earth’s surface is 11.2 km s-1. A body is projected out with thrice this speed. What is the speed of the body far away from the Earth? Ignore the presence of the Sun and other planets.
Answer: 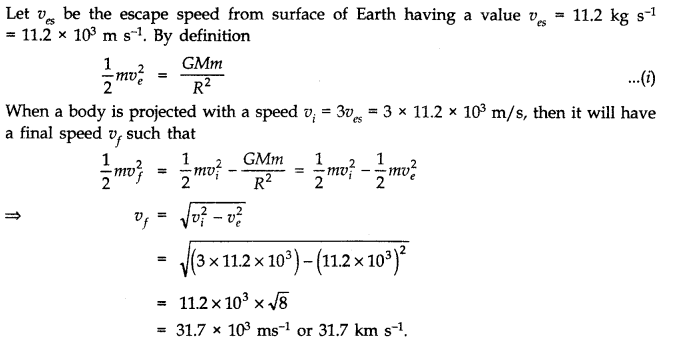 Question 8. 21. Two heavy spheres each of mass 100 kg and radius 0.10 mare placed 1.0 m apart on ahorizontal table. What is the gravitational field and potential at the mid point of the line joining the centres of the spheres ? Is an object placed at that point in equilibrium ? If so, is the equilibrium stable or unstable?
Answer:  Here G = 6.67 x 10-11 Nm2 kg-2; M = 100 kg; R = 0.1 m, distance between the two spheres, d = 1.0 m
Suppose that the distance of either sphere from the mid-point of the line joining their centre is r. Then r=d/2=0.5 m. The gravitational field at the mid-point due to two spheres will be equal and opposite.

Question 8. 23. A star 2.5 times the mass of the sun and collapsed to a size of 12 km rotates with a speed of 1.2 rev. per second. (Extremely compact stars of this kind are known as neutron stars. Certain stellar objects called pulsars belong to this category). Will an object placed on its equator remain stuck to its surface due to gravity? (mass of the sun = 2 x 1030 kg).
Answer:  Acceleration due to gravity of the star,g= GM/R2 …………(i)
Here M is the mass and R is the radius of the star.
The outward centrifugal force acting on a body of mass m at the equator of the star =mv2/R =mR w2——-(ii)
From equation (i), the acceleration due to the gravity of the star

Since the inward force due to gravity on a body at the equator of the star is about 2.2 million times more than the outward centrifugal force, the body will remain stuck to the surface of the star. 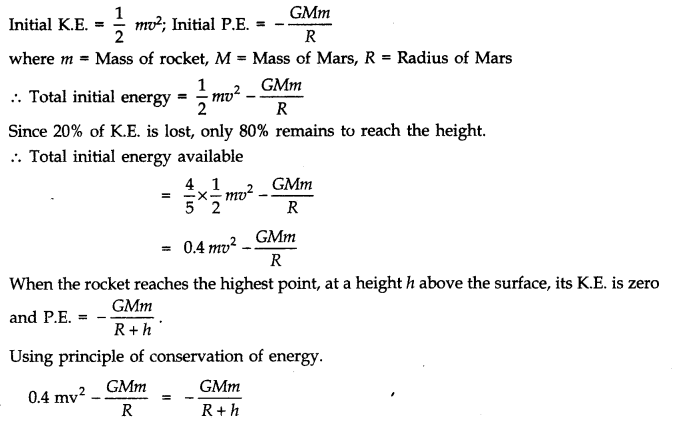 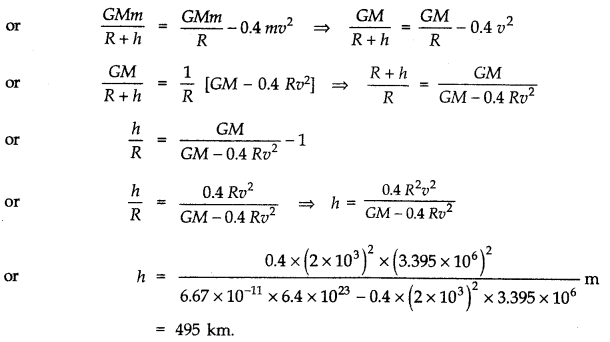