Multiple Choice Questions
1. In some animal groups, the body is found divided into compartments with serial repetition of at least some organs. This characteristic feature is called
(a) segmentation (b) metamerism (c) metagenesis (d) metamorphosis.
Soln.(b) : Metamerism is true segmentation where external divisions correspond to internal divisions. The body is divided both externally and internally into number of segments (100-120) called metameres. E.g., In earthworm, genital papillae are present in 17lh and 19th segments and nephridipores are scattered all over body surface except first two. Metagenesis is alternation of two life forms in an organism. Metamorphosis is phenomenon of passing through different juvenile stages before attaining adult form. Segmentation is division of- body into different segments and in some organisms, only external divisions are seen as head, thorax and abdomen.

2. Given below are types of cells present in some animals. Which of the following cells can differentiate to perform different functions?
(a) Choanocytes
(b) Interstitial cells
(c) Gastrodermal cells
(d) Nematocytes
Soln.(b) : Interstitial cells are reserve cells and are called totipotent cells, which can
differentiate into any type of cells. Nemato- cvtes are stinging cells used for offence and defence. Gastrodermal cells line the gastrodermis and intracellular digestion takes place inside these cells. All these cells are found in cnidarians. Choanocytes or collar cells are found in sponges; they are specialised flagellated cells that line spongocoel and canals.

4. Which of the following pairs of animals has non- glandular skin?
(a) Snake and Frog
(b) Chameleon and Turtle
(c) Frog and Pigeon
(d) Crocodile and Tiger
Soln.(b) Amphibians and mammals have glandular skin, i.e., they have glands on their skin to keep it moist, which include sweat’gland and sebaceous glands, present in mammals. While aves have dry skin and does not contain any glands, except, preen/
oil gland at the base of the tail. Reptiles are devoid of glands. Therefore, Chameleon and turtle have non-glandular skin.

5.Birds and mammals share one of the following characteristics as a common feature.
(a) Pigmented skin (b) Pneumatic bones
(c) Viviparity (d) Warm blooded
Soln.(d) : Both birds and mammals are homoiotherms (warm blooded) i.e., they have ability to maintain constant body temperature inspite of changes in ambient conditions.

7.Which one of the following statements is incorrect?
(a) Mesoglea is present in between ectoderm and endoderm in Obelia.
(b) Asterias exhibits radial symmetry.
(c) Fasciola is a pseudocoelomate animal.
(d) Taenia is a triploblastic animal.
Soln. (c) : Fasciola (a platyhelminth) is an acoelomate animal.

8.Which one of the following statements is incorrect?
(a) In cockroaches and prawns excretion of waste material occurs through Malpighian tubules.
(b) In ctenophores, locomotion is mediated by comb plates.
(c) In Fasciola, flame cells take part in excretion.
(d) Earthworms are hermaphrodites and yet cross fertilisation take place among them.
Soln. (a): In cockroaches excretion takes place by Malpighian tubules while in prawns it takes place by green glands.

9.Which one of the following is oviparous?
(a) Platypus (b) Flying fox (Bat)
(c) Elephant (d) Whale
Soln.(a): Platypus, bat, elephant and whale, all belong to Class Mammalia of Sub-phylum
Vertebrata. Out of the four, only platypus is oviparous (egg laying), and rest all are viviparous (give birth to young ones).

10.Which one of the following is not a poisonous snake?
(a) Cobra (b) Viper
(c) Python (d) Krait
Soln. (c): Python is a large and non-poisonous snake. It kills its prey by coiling around and crushing and swallowing the prey. ,

3.What is metagenesis? Mention an example which exhibits this phenomenon.
Soln. In some cnidarians, polyps reproduce medusae asexually and medusae form the polyps sexually. Such alternation of asexual and sexual phases in the life cycle of cnidarians is called metagenesis e.g., Obelici.

4.What is the role of feathers?
Soln. Feathers are flight adaptations in birds, they provide passage for air and reduce friction to minimum. They help to maintain constant body temperature by preventing heat loss.

5.Which group of chordates possess sucking and circular mouth without jaws?
Soln. In Cyclostomata, mouth is circular and jawless. It feeds by sucking blood of host fishes. E.g:, Lamprey. 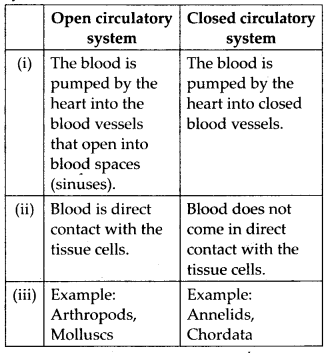 (b) The differences between oviparous and viviparous characteristic i.e., ovipary and vivipary are as follows: 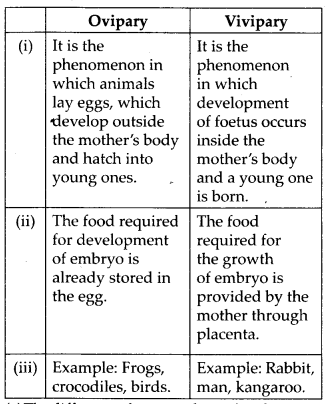 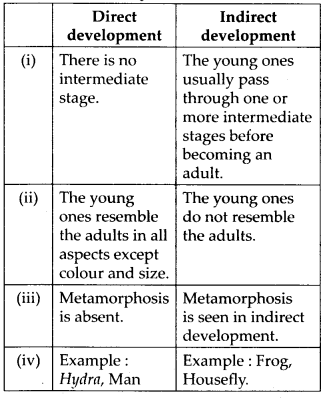 4. Fill up the blank spaces appropriately 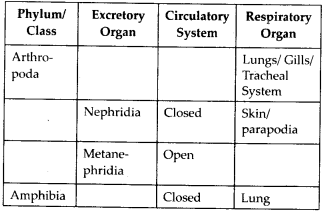 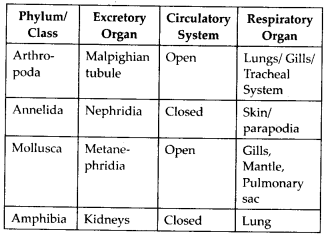 6. Endoparasites are found inside the host body. Mention the special structure, possessed by these and which enables them to survive in those conditions.
Soln. Most Platyhelminthes are endoparasites. Special structures in parasitic Platyhelminthes include presence of thick integument which is resistant to host’s digestive enzymes and anti ¬toxins and they possess adhesive organs like
suckers in flukes and hooks and suckers in tapeworms for firm grip in host’s body. 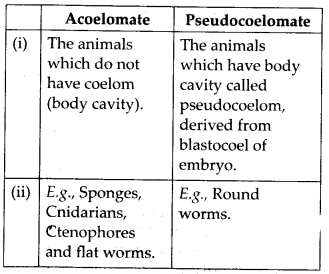 (e) The differences between notochord and
nerve cord are as follows: 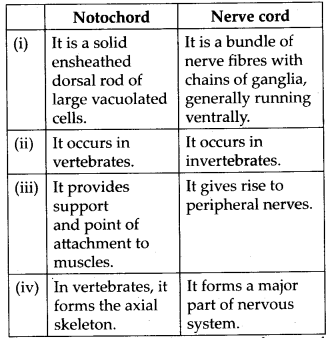 (f)The differences between polyp and medusa are as follows: 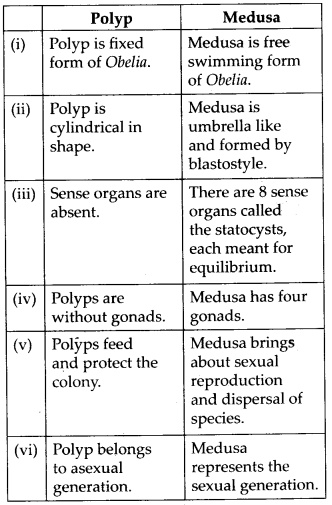 9. Give the characteristic features of the following, citing one example of each:
(a) Chondrichthyes and osteichthyes
(b) Urochordata and cephalochordata
Soln. (a) Characteristic features of chondri-chthyes are:
(i) They are mostly marine called poikilothermic animals (i.e., they have the capacity to regulate their body temperature.
(ii)TKey have cartilaginous endoskeleton. Notochord is persistent throughout life.
(iii)Mouth is ventral in position, skin is tough containing minute placoid scales and teeth are modified placoid scales. They have strong jaw and are predaceous by nature.
(iv)Gill slits are generally five pairs and gill cover (operculum) are absent.
(v) Heart is two chambered with one auricle and one ventricle.
(vi)Some of them possess electric organs (e.g., Torpedo) and some possess poison sting (e.g., Trygon).
(vii)They are called ureotelic animals as they secrete urea.
(viii)Sexes are separate and fertilisation is internal.
(ix)Males usually have claspers on pelvic fins, which help in copulation.
(x)Many of them are viviparous.
E.g.r Scoliodon (shark or dog fish), Pristis (saw fish), Trygon (stingray).
Characteristic features of osteichthyes are as follows:
(i) They are found in marine water as well as in freshwater.
(ii) The body is streamlined to facilitate easy movement through water.
(iii) Exoskeleton contains dermal scales like cycloid or ctenoid scales.
(iv) Gills are covered with operculum (gill cover) and are generally four pairs.
(v) Heart is two-chambered with one auricle and one ventricle.
(vi) Air bladders are present. They are the hydrostatic organs.
(vii) These are ammonotelic animals that excrete ammonia.
(viii) Sexes are separate. Fertilisation is usually external, mostly viviparous and development is direct.
E.g., Labeo (rohu), Mrigal (carps), Catla (catla), Hippocampus (sea horse), Exocoetus (flying fish), Remora (sucker fish), Anabas (climbing percfi), Protopterus (African lung fish).
(b) Characteristic features of Urochordata
are:
(i) Urochordates are commonly called Tunicates because adult body is enclosed
in test or tunic.
(ii)The notochord is present only in the tail of the larva and disappears in the adult.
(iii)Adult is sedentary, while larva is motile.
(iv)Nerve cord is found only in the larva. It is replaced by a dorsal ganglion in the adult.
(v)The larva undergoes retrogressive metamorphosis.
Example: Herdmania.
Characteristic features of Cephalochordata
are:
(i) The notochord is present throughout life and extends from the anterior end to the posterior end of the body.
(ii)Both larva and adult are motile.
(iii)Nerve cord is present in both larva and adult.
(iv)The larva undergoes progressive meta-morphosis.
Example: Branchiostoma.

10 .Mention two similarities between
(a) Aves and mammals
(b) A frog and crocodile
(c) A turtle and Pila
Soln. (a) Both have 4-chambered heart and are warm-blooded.
(b) Both are cold-blooded and oviparous.
(c) Both are aquatic and their body is covered by shell. 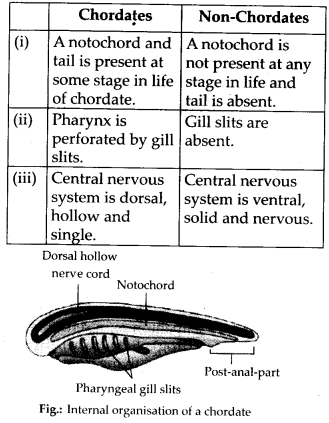 2.What is the relationship between germinal layers and the formation of body cavity in case of coelomate, acoelomates and pseudocoelomates?
Soln. There are three germinal layers: ectoderm, endoderm and mesoderm. Presence or absence of a cavity between the body wall and gut wall is very important in classification. The body cavity lined by mesoderm is called coelom. The animals having coelom are called coelomates. In coelomates, body cavity arises as a cavity in embryonic mesoderm. In this, mesoderm of embryo provides cellular lining to the cavity and coelom is filled with coelomic fluid, E.g., annelids, echinoderms, and chordates. In Pseudocoelomata, body cavity is derived from blastocoel of the embryo and the coelom is not lined by mesoderm. Instead, mesoderm is present as scattered pouches in between the ectoderm and mesoderm. Such a coelom is called pseudocoelom. Aschelminthes are pseudocoelomates. Acoelomates are those animals in which the body cavity is absent i.e., they do not have coelom. E.g., sponges, cnidarians, ctenophores, flatworms.

3.Comment upon the habitats and external features of animals belonging to class, amphibia and reptilia.
Soln. Class – Amphibia
Habitat : Amphibians are first cold blooded
vertebrates which can Jive on land as well
as in water. They are mostly found in warm
countries.
External features:
(i) Body is compressed and cylindrical and differentiated into head and trunk.
(ii)Nostrils are connected to the buccal cavity eyes have eyelids.
(iii)Skin is mostly smooth, moist, highly vascular and rich in gland. Scales, are generally absent. It helps in cutaneous respiration.
(iv)Amphibians mostly have two pairs of pentadactyl limbs. They are used for locomotion.
(v)A pair of external nares for olfaction, a pair of eyes with movable eyelids are present.Tympanum represents the ear. E.g., Ram (frog), Bufo (toad), Elyla (tree frog), Rhacophorus (flying frog), Salamandra (salamander) etc.
Class – Reptilia
Habitat : Reptiles are mostly terrestrial
animals, mainly found in warmer parts of the
world. Only few of them live in water such as
crocodiles, turtles.
External features :
(i) The body may be long, cylindrical or short and broad. It is divisible as head,
neck, trunk and tail.
(ii) They have dry, rough and non-glandular
skin. It is provided with horny, epidermal
scales or scutes.
(iii) Appendages are of two pairs of
pentadactyl limbs with powerful horny
claws. Limbs are locomotory organs.
(iv) Sense organs like eyes, ears and nose are
well developed. ….
(v) Eyelids and nictitating membrane are present in lizards but absent in snakes.
E.g., Calotes (garden lizard), Draco (flying
lizard), Naja (cobra), Hemidactyhis (wall lizard)

4. Mammals are most adapted among the vertebrates. Elaborate.
Soln. Mammals are most adapted among the vertebrates. This can be elaborated by the following characteristics of mammals.
(i) They are found in a variety of habitats like polar ice caps, mountains, deserts, forests and oceans.
(ii) Most of them are terrestrial but some of them are adapted to fly (Bat) or live in water (Whale).
(iii) They have 2 pairs of limbs, adapted for walking, running, climbing, burrowing, swimming or flying.
(iv) They have mammary glands and are the only animals which nourish their young . ones with milk.
(v) They are capable of learning due to presence of developed brain and thus are dominant animals.
(vi) Presence of muscular diaphragm is a characteristic feature of mammals which help in breathing.
(vii) Four-chambered heart pumps only oxygenated blood.
(viii) A well developed placenta is present except in egg laying mammals.
(ix) They are warm blooded, capable of maintaining constant body temperature. E.g., Macropus (Kangaroo), Equus (Horse), Macaca (Monkey) etc.