2. A person suffers punctures in his chest cavity in an accident, without any damage to the lungs, its effect could be
(a) Reduced breathing rate
(b) Rapid increase in breathing rate
(c) No change in respiration
(d) Cessation of breathing.
Solution.(d): The movement of air into and out of lungs is due to development of pressure gradient between the lungs and the atmosphere. Punctures in a person’s chest may lead to loss of pressure gradient, and thus resulting in cessation of breathing.

5.Mark the incorrect statement in context to O2 binding to Hb.
(a) Higher pH  (b) Lower temperature
(c) Lower pCO2
(d) Higher pO2
Solution.(None of the options is correct) :
Oxygen dissociation curve is highly useful in studying the effect of factors like pCO2 , H+concentration, etc., on binding of O2 with haemoglobin. In the alveoli, high pO2, low pCO2, lesser H+ concentration i.e. higher pH and lower temperature, all these factors are favourable for the formation of oxyhaemoglobin.

8.Respiratory process is regulated by certain specialized centres in the brain. One of the following listed centres can reduce the inspiratory duration upon stimulation.
(a) Medullary inspiratory centre
(b) Pneumotaxic centre
(c) Apneustic centre
(d) Chemosensitive centre
Solution. (b) : Pneumotaxic centre located in the dorsal part of pons varolii, regulates rate of respiration by reducing the duration of inspiration.

10.In breathing movements, air volume can be estimated by
(a) Stethoscope (b) Hygrometer
(c) Sphygmomanometer
(d) Spirometer.
Solution. (d) :Spirometry is the process of recording the changes in the volume and movement of air in and out of the lungs and the instrument used for this purpose is called spirometer or respirometer, which measures the volume of air inhaled and exhaled by lungs.

12.The oxygen – haemoglobin dissociation curve will show a right shift in case of ,
(a) High pCO2 (b) High pO2
(c) Low pCO2 (d) Less H+ concentration.
Solution.(a) : The oxygen haemoglobin dissocia-tion curve is shifted either to right or left by various factors. The shift of curve to right indicates dissociation of oxygen from haemoglobin. It occurs in the following conditions :
(i) Decrease in partial pressure of oxygen.
(ii)Increase in partial pressure of carbon dioxide (Bohr effect).
(iii)Increase in hydrogen ion concentration and decrease in pH (acidity).
(iv)Increased body temperature.
(v) Excess of 2, 3-diphosphoglycerate (DPG).

Short Answer Type Questions
1.Define the following terms.
(a) Tidal volume
(b) Residual volume
(c) Asthma
Solution.(a) Tidal volume is the volume of air inspired or expired during a normal breath. Its value is approximately 500 mL.
(b) Volume of air remaining in the lungs even after a forcible expiration is called residual volume. This average 1100 mL to 1200 mL.
(c) Asthma is a respiratory disorder which causes difficulty in breathing, wheezing, coughing due to inflammation of bronchi and bronchioles.

Short Answer Type Questions
1.State the different modes of CO2 transport in blood.
Solution.CO2 is transported in the blood by the following modes:
(i) Dissolved in plasma (about 7 %).
(ii)As bicarbonate ions in plasma (about 70%).
(iii)As carbaminohaemoglobin (about 20 – 25%).

2.Compared to O2 , diffusion rate of CO2 through the diffusion membrane, unit difference in partial pressure is much higher. Explain.
Solution.This is due to the solubility of CO2 which is 20 – 25 times higher than that of O2 . 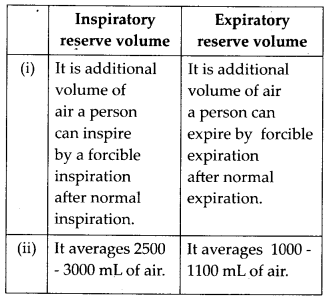 (b) The differences between vital capacity and total lung capacity are as follows: 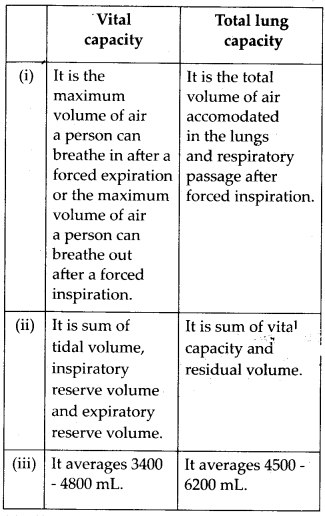 (c) The differences between emphysema and occupational respiratory disorder are as follows: 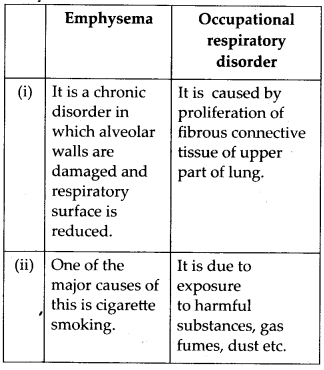 Long Answer Type Questions
1.Explain the transport of O2 and CO2 between alveoli and tissue with diagram.
Solution. Transport of O2 : Blood carries oxygen from the alveoli to various body tissues. About 3% of 02 is carried in a dissolved state through the plasma. About 97% of O2 is transported in combination with haemoglobin of the RBCs as oxyhaemoglobin. Partial pressure of O2 is high in the alveoli as compared to pulmonary
blood capillaries, therefore 02 diffuses from alveoli into the pulmonary capillaries and combines with Hb to form oxyhaemoglobin. When this oxygenated blood reaches the different tissues having low partial pressure of 02, the bonds holding  O2 to Hb become unstable. As a result, O2 is released from the blood capillaries into the tissues. 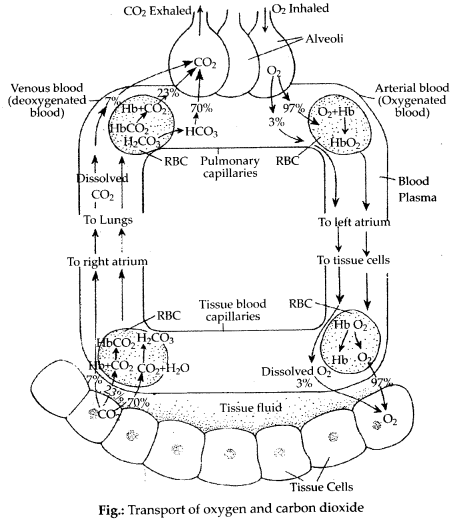 Transport of CO2 : Blood carries CO2 from various body tissues to the alveoli. About 7% of CO2 gets dissolved in the blood plasma and is carried in solution. About 70% of CO2 is transported by plasma as bicarbonate ions. From the tissues (which have high pCO2), C02 diffuses into the blood capillaries (which have low pCO2). In the RBCs, CO2 combines with water, to form carbonic acid (H2 CO3 ).H2CO3  is unstable and quickly dissociates into hydrogen ions and bicarbonate ions.

The above reaction is thousand times faster in RBCs as compared to plasma because RBCs contain carbonic anhydrase enzyme that reversibly catalyses the conversion of CO2 and water to H2CO3. About 20-35% CO2 is carried by Hb as carbaminohaemoglobin.
The blood carries CO2 in these three different forms towards the alveoli. CO2 is less soluble in arterial blood than in venous blood. Therefore, some CO2 diffuses from the plasma of the pulmonary capillaries into the alveoli. For the release of CO2 from the bicarbonate, a series of reverse reactions takes place and CO2 is released into the alveoli of the lungs. High pO2 in the pulmonary capillaries due to oxygenation of Hb favours separation of CO2 from carbaminohaemoglobin.

2.Explain the mechanism of breathing with neat labelled sketches.
Solution.Breathing involves two stages : inspiration during which atmospheric air is drawn in and expiration by which the alveolar air is released out. The movement of air into and out of the lungs is carried out by creating a pressure gradient between the lungs and the atmosphere. The diaphragm and a specialised set of muscles – external and internal intercostal muscles between the ribs help in the mechanism of breathing. The given figure shows thoracic cavity Inspiration: 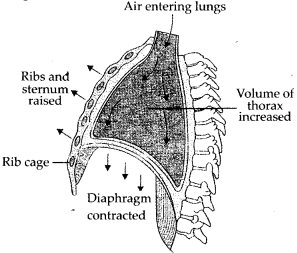 Inspiration is initiated by the contraction of diaphragm which increases the volume of thoracic chamber in the antero-posterior axis. The contraction of external inter ¬costal muscles lifts up the ribs and sternum causing an increase in the volume of the thoracic chamber in the dorsal-ventral axis. This increase in the thoracic volume leads to similar increase in pulmonary volume. An increase in pulmonary volume decreases the intra-pulmonary pressure to less than the atmospheric pressure which forces the air from outside to move into the lungs, i.e., inspiration. Relaxation of the diaphragm and intercostal muscles cause the diaphragm and sternijm to go back to their normal positions and thus reduce the thoracic volume and thereby the pulmonary volume. This results in an increase in intra-pulmonary pressure to slightly above the atmospheric pressure causing the expulsion of air from the lungs i.e., expiration.
The given figure shows thoracic cavity during expiration: 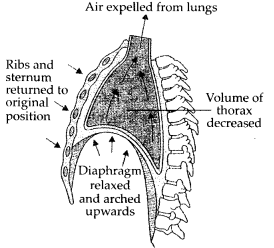