2.At which stage of meiosis does the genetic constitution of gametes is finally decided?
(a) Metaphase-I (b) Anaphase-II (c) Metaphase – II (d) Anaphase -1
soln.(d): The paternal and maternal chromosomes of each homologous pair segregate during anaphase I independently of the other chromosomes. Anaphase I is the cytological event that corresponds to Mendel’s law o’f independent assortment. Although the paternal and maternal chromosomes of a homologous pair have the genes for the same traits, either chromosome of a pair may carry different alleles of the same genes. Therefore, independent assortment of homologous chromosomes in anaphase I introduces genetic variability.

5. Mitosis is characterised by
(a) reduction division
(b) equal division
(c) both reduction and equal division
(d) pairing of homologous chromosomes.
soln.(b): Mitosis is a type of cell division in which chromosomes replicate and get equally distributed (quantitatively and qualitatively) into two daughter nuclei so that the diploid daughter cells have equal and identical genetic complement as the parent cell.

7.Cells which are not dividing are likely to be at
(a) G1 (b) G2
(c) G0 (d) S phase.
soln.(c): Cells that do not divide further and exit G1  phase to enter an inactive stage called quiescent stage ( G0 ) of the cell cycle. Cells in this stage remain metabolically active but do not grow and differentiate unless stimulated by appropriate signal depending on the requirement of the organism.

8.Which of the events listed below is not observed during mitosis?
(a) Chromatin condensation
(b) Movement of centrioles to opposite poles
(c) Appearance of chromosomes with two chromatids joined together at the centromere
(d) Crossing over
soln. (d): Crossing over occurs during meiosis I and not mitosis.

9.Identify the wrong statement about meiosis.
(a) Pairing of homologous chromosomes
(b) Four haploid cells are formed
(c) At the end of meiosis number of chromo-somes are reduced to half
(d) Twp cycles of DNA replication occur
soln.(d) :Only one cycle of DNA replication occurs during meiosis. Meiosis consists of two successive divisions (meiosis I and meiosis II) but no DNA replication prior to, second division.

10 .Select the correct statement about  G1 phase.
(a) Cell is metabolically inactive.
(b) DNA in the cell does not replicate.
(c) It is not a phase of synthesis of macro-molecules.
(d) Cell stops growing.
soln.(b):  G1 belongs to interphase of cell cycle which is metabolically active stage. During  G1,  synthesis of ATP, nucleotides, amino acids, RNAs and proteins take place. DNA replicate in S-phase of the cell cycle and not in  G1 phase.

4.Which tissue of animals and plants exhibits meiosis?
soln. Meiosis occurs in germ cells during sexual reproduction, resulting in the formation of spores and gametes, as it is a reductional division.

8.The diagram shows a bivalent at prophase-l of meiosis. Which of the four chromatids can crossover?

12.lt is said that the one cycle of cell division in human cells (eukaryotic cells) takes 24 hours. Which phase of the cycle, do you think occupies the maximum part of cell cycle?
soln.  G1  phase of interphase is of longest duration. It takes about 10 hours in 24 hour cell cycle.

3.Label the diagram and also determine the stage at which this structure is visible.

soln. The given diagram shows transition from prophase to metaphase.

6.The following events occur during the various phases of the cell cycle, name the phase against each of the events.
(a) Disintegration of nuclear membrane________
(b) Appearance of nucleolus________
(c) Division of centromere________
(d) Replication of DNA________
soln.
(a) Disintegration of nuclear membrane Late Prophase.
(b) Appearance of nucleolus Telophase.
(c) Division of centromere Anaphase.
(d) Replication of DNA S-phase.

7.Mitosis results in producing two cells which are similar to each other. What would be the consequence if each of the following irregularities occur during mitosis?
(a) Nuclear membrane fails to disintegrate
(b) Duplication of DNA does not occur
(c) Centromeres do not divide
(d) Cytokinesis does not occur
soln.(a) If nuclear membrane fails to disintegrate intranuclear mitosis occurs which means spindle fibre formed inside the nucleus and mitosis occurs there.
(b) Karyokinesis is followed by cytokinesis. If DNA synthesis does not occur, then daughter cell would receive half the amount of parent DNA.
(c) If centromeres do not divide, then chromosomes would not get separated and chromatids would not move towards the opposite poles, leading to non-disjunction of chromosomes.
(d) Cytokinesis is division of cytoplasm of parent cell into two daughter cells. Failure of cytokinesis to occur would not result in formation of daughter cells.

11.Comment on the statement – Meiosis enables the conservation of specific chromosome number of each species even though the process per se, results in reduction of chromo-some number.
Soln.‘ Meiosis is reductional division which ensures production of haploid phase in life cycle of sexually reproducing organisms, but fertilisation restores the diploid phase, thus, enables conservation of specific chromosome number. E.g., gametes produced by 2n parents are haploid (n), but the zygote is diploid.

12.Name a cell that is found arrested in diplotene stage for months and years. Comment in 2-3 lines how it completes cell cycle.
soln. The oocytes are arrested in diplotene stage of prophase I of meiosis I. They undergo DNA synthesis and chromosome paring takes place but meiosis does not proceed. After attainment of puberty, primary follicle matures into secondary and tertiary follicle. Primary oocyte completes meiosis I and forms secondary oocyte and second polar body. Tertiary follicle grows to form Graafian follicle and secondary oocyte proceeds with meiosis II and gets arrested at metaphase II.

13.How does cytokinesis in plant cells differ from that in animal cells?
soln. Differences between plant cytokinesis and animal cytokinesis: 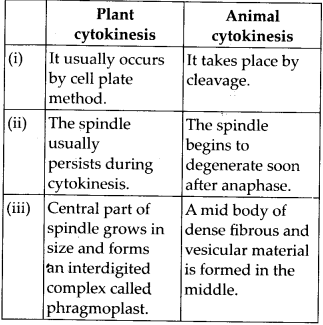 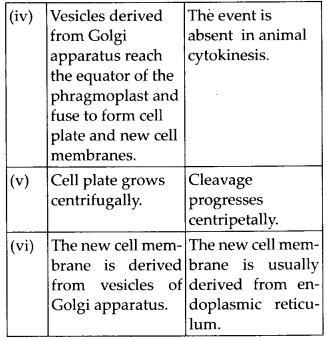 Long Answer Type Questions
1.Comment on the statement – Telophase is reverse of prophase.
soln. During telophase, events of prophase occur in reverse sequence. Prophase is known for the initiation of condensation of chromosomal material, which during the process of chromatin condensation becomes untangled, and finally the centriole (already duplicated during S-phase of interphase) begins to move towards the opposite pole of the cell. In this phase, initiation of mitotic spindle assembly, microtubular and proteinaceous components of cell cytoplasm helps in completion of the proces.
At the end of the prophase, i.e., during late prophase the nucleolus disintegrates gradually and the nuclear envelope disappear. This disappearance marks the end of the prophase.
Reverse of prophase is the telophase. At the onset of this stage, the spindle disappears (absorbed in cytoplasm) and the chromosomes decondense and further loses their individuality after reaching their respective poles. The chromosomes gradually uncoil and cluster at opposite spindle poles thus, their individual identity as discrete elements is lost. Nuclear envelope slowly reforms around each group of chromosomes and nucleolus, Golgi complex and ER reappears.

2.What are the various stages of meiotic prophase-l? Enumerate the chromosomal events during each stage.
soln. Prophase-I is the first stage of meiosis-I. It is considered to be the most complicated and prolonged phase as if compared to the similar stage in mitosis.
It is further sub-divided into five sub-phases on the basis of chromosomal behaviour, i.e., leptotene, zygotene, pachytene, diplotene and diakinesis.
(i)Leptotene : It is known to be the very first stage of meiotic division following the interphase. During this stage chromosomes become gradually visible under light microscope, centrioles start moving towards opposite ends or poles and each centriole develops astral rays. Each chromosome is attached to the nuclear envelope through the attachment plate at both of its ends.
(ii)Zygotene : This is the next sub-stage that takes place after the completion of the leptotene. In this stage homologous chromosomes pair up. This pairing is done in a such a way that the genes of the same character present on the two chromosomes lie exactly opposite to each other. This process of association is known as synapsis. Formation of synaptonemal complex takes place by a pair of homologous chromosomes that show synapsis. The complex so formed, on account of synapsis forms a bivalent or a tetrad.
(iii)Pachytene: It is the stage which
immediately follows zygotene where the pair of chromosomes become twisted spirally around each other and cannot be distinguished separately. Bivalent chromosomes are clearly seen as tetrads. In this stage, sometimes exchange of genes or crossing over between the two non-sister chromatids of homologous chromosomes occurs at the points called recombination nodules, which appear at intervals on synaptonemal complex. By the end of pachytene recombination gets completed leaving the chromosomes linked at the sites of crossing over.
(iv)Diplotene : It is the stage of longest duration of all. In this the synaptonemal complex appears to get dissolve while, the chromatids of each tetrad remain clearly visible. Recombined homologous chromosomes of thebi valents get separated and form chiasmata (X-shaped structures). Chiasmata formation is necessary for the separation of homologous chromosome which have undergone the process of crossing-over.
(v) Diakinesis : This is known to be the final stage of meiotic prophase-I. Also known as terminalisation, due to the shifting of chiasmata towards the end of the chromosomes. Chromosomes become fully condensed, nucleolus degenerates, nuclear envelope breakdown into vesicles and there is formation of meiotic spindle (as in mitosis) in order to prepare the homologous chromosomes for separation. 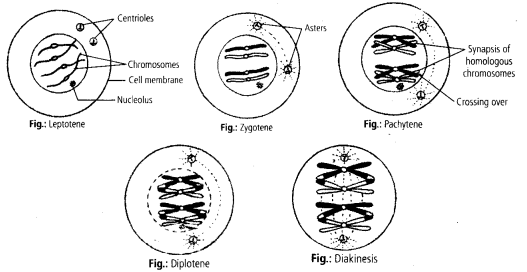 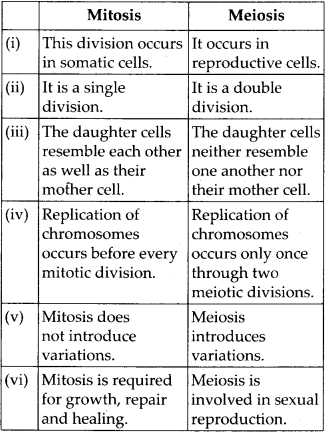 (b) Centromere of all the chromosomes form a plate called metaphasic plate or equatorial plate. This plate is formed during metaphase
stage of mitosis and meiosis. On this plate the small chromosomes come to lie towards the interior while the larger one are arranged towards the periphery. The centromeres of all the chromosomes lie on the equator while the limbs are placed variously according to their size and spatial arrangement.

5.Write briefly the significance of mitosis and meiosis in multicellular organism.
soln. Significance of mitosis is multicellular organisms are as follows:
(i)Growth. Somatic cells are formed by mitosis. Therefore, mitosis is essential for growth and development of a multicellular organism. Plants are able to grow throughout their life due to mitotic divisions in their apical and lateral meristems.
(ii)Nucleocytoplasmic’ Ratio : An efficient cell has a high nucleocytoplasmic ratio. Increase in size lowers the ratio. It is brought back to efficient level through division.
(iii)Maintenance of Chromosome Number : Mitosis involves replication and equitable distribution of all the chromosomes so that all the cells of a multicellular organism have the same number and type of chromosomes. This helps in proper co-ordination among different cells.
(iv)Regeneration : Mitosis keeps all the somatic cells of an organism genetically similar, resembling the fertilised egg. They, therefore, are able to regenerate part or whole of the organism.
(v) Repair and Healing: It is a mechanism for replacing old or worn out cells. An injury or wound is healed by repeated mitotic divisions of the surrounding healthy cells.
(vi)Opportunity for differentiation: Mitosis produces multicellular condition. It provides opportunity for differentiation.
Significance of meiosis in multicellular organism are as follows:
(i) Formation of gametes: Meiosis forms gametes that are essential for sexual reproduction.
(ii)Maintenance of chromosome number :
Meiosis maintains the fixed number of chromosomes in sexually reproducing organisms by halving the same. It is essential since the chromosome number becomes double after fertilisation.
(iii)Assortment of Chromosomes : In meiosis paternal and maternal chromosomes assort independently. It causes reshuffling of chromosomes and the traits controlled by them. The variations help the breeders in improving the races of useful plants and animals.
(iv)Crossing over : It introduces new combination of traits or variation. 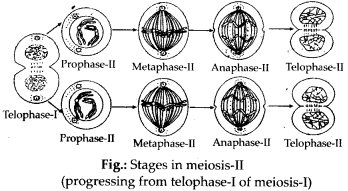