Multiple Choice Questions
1.Select what is not true of intestinal villi among following.
(a) They possess microvilli.
(b) They increase the surface area.
(c) They are supplied with capillaries and the lacteal vessels.
(d) They only participate in digestion of fats.
Solution.(d) : Intestinal villi are finger like projections, present in small intestine which increases surface area for absorption of fats, amino acids, monosaccharides, vitamins, water etc. Villi do not participate in digestion of fat.

3.One of the following is not a common disorder associated with digestive system.
(a) Tetanus (b) Diarrhoea
(c) Jaundice (d) Dysentery
Solution.(a) : Tetanus is caused by bacterium Clostridium tetani. Its symptoms are spasm of muscies (of jaw and face) and severe pain. Diarrhoea is the frequent defecation of liquid faeces. It reduces absorption of food. Jaundice is the disease of liver characterised by yellowing of eyes and skin due to large quantities of bilirubin pigment in extracellular fluid. Dysentry is an inflammatory disorder of the intestine, especially the colon, that results in severe diarrhoea containing blood and mucus in faeces with fever, abdominal pain and painful passing of stool.

4.A gland not associated with the alimentary canal is
(a) pancreas
(b) adrenal
(c) liver
(d) salivary glands.
Solution.(b) : Adrenal glands are hormone secreting endocrine glands which are located on the top of kidneys and do not take part in digestion.

9.Liver is the largest gland and is associated with various functions, choose one which is not correct.
(a) Metabolism of carbohydrate
(b) Digestion of fat
(c) Formation of bile
(d) Secretion of hormone called gastrin
Solution.(d) : Gastrin hormone is secreted by gastrin cells (G-cells) in the pyloric region of the stomach. It stimulates gastric glands to secrete and release the gastric juice. It also stimulates gastric mobility.

Very Short Answer Type Questions
1.The food mixes thoroughly with the acidic gastric juice of the stomach by the churning movements of its muscular wall. What do we call thfe food then?
Solution.The food at this stage is called chyme.

4.Name the enzymes involved in the breakdown of nucleotides into sugars and bases.
Solution. Nucleotidases and nucleosidases.

5.Define digestion in one sentence.
Solution.The process of conversion of complex food substances into simple absorbable forms with the help of enzymes is called digestion.

7.Stomach is located in upper left portion of the abdominal cavity and has three major parts. Name these three parts.
Solution. The three major parts of stomach are cardiac, fundus and pylorus.

8.Does gall bladder make bile?
Solution. NO, bile is secreted by hepatic cells (liver cells) and is stored and concentrated in the gall bladder.

Short Answer Type Questions
1.What is pancreas? Mention the major secretions of pancreas that are helpful in digestion.
Solution. Pancreas is a heterocrine (both exocrine and endocrine) gland situated between the limbs of the ‘U’ shaped duodenum. The exocrine part of pancreas secrete pancreatic juice which contains three proenzymes; trypsinogen, chymotrypsinogen and procarboxypeptidase and some enzymes; DNase, RNase, pancreatic amylase and lipase. Pancreatic juice helps in digestion of starch, proteins, fats and nucleic acids. Endocrine part of pancreas consists of islets of Langerhans which contains a-and P-cells which secrete hormone glucagon and insulin respectively, which regulate blood glucose level.
Proteins, proteoses and peptones present in the chyme, on reaching the intestine are acted upon by the proteolytic enzymes of pancreatic juice as given below:

Carbohydrates, fats and nucleic acids present in the food are also hydrolysed by pancreatic juice. 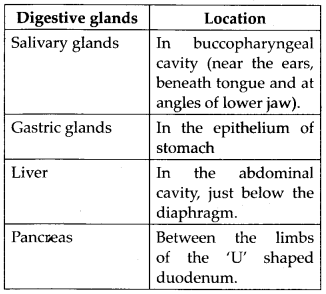 5.Correct the statement given below by the right option shown in the bracket against them.  Absorption of amino acids and glycerol takes place in the (small intestine/ large intestine).  The faeces in the rectum initiate a reflex causing an urge for its removal (neural / hormonal).  Skin and eyes turn yellow in infection, (liver/stomach).  Rennin is a proteolytic enzyme found in gastric juice of (infants / adults).  Pancreatic juice and bHe are released through (intestine-pancreatic/hepato ¬pancreatic duct).  Oipeptides, disaccharides and glycerides are broken down into simple substances in region of small intestine (jejunum/duodenum).
Solution.
(a) Small intestine (b) neural (c) liver (d) infants (e) hepato-pancreatic duct (f) duodenum 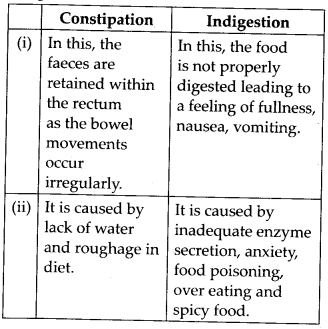 10.Describe the enzymatic action on fats in the duodenum.
Solution. Fat is largely digested in the small intestine (duodenum). Bile secreted by liver is released into duodenum which break down fat droplets into small micelles by the process, known as emulsification. This increases lipase action, on fats. Pancreatic juice and intestinal juice contain lipase. The pancreatic lipase converts triglycerides, first into diglycerides and then into monoglycerides, releasing a fatty acid at each step. The intestinal lipase converts remaining fats into monoglycerides and fatty acids. Finally all fats are converted into fatty acids, glycerol and monoglycerides.

Long Answer Type Questions
1.A person had roti and dal for his lunch.Trace the changes in those during its passage through the alimentary canal.
Solution. Roti contains starch while dal contains proteins. When the food is taken into the buccal cavity the teeth and tongue with the help of saliva masticate and mix up the food thoroughly. Mucus in saliva helps in lubricating and adhering the masticated particles into a bolus. By swallowing, the bolus is then passed into the pharynx and then into the oesophagus. In the oral cavity, about 30% of the starch present in roti is hydrolysed by salivary amylase present in saliva into maltose.

The food then moves into the stomach. In the stomach, the food mixes thoroughly with the acidic gastric juice by the churning movements of its muscular wall and is called chyme. A proteolytic enzyme pepsin present in the gastric juice converts proteins into proteoses and peptones. Gastric juice does not contain any starch digesting enzyme. Proteins, proteoses and peptones in the chyme reaching the intestine are acted upon by the proteolytic enzymes of pancreatic juice as follows:

Carbohydrates in the chyme are hydrolysed by pancreatic amylase into disaccharides.

The enzymes in the intestinal juice act on dipeptides and maltose to form the respective simple absorbable forms.

Finally, the amino acids and glucose are absorbed through the mucosa of the small intestine into the blood stream. The absorbed substances finally reach the tissues which utilise them for their activities. This process is called assimilation.
The undigested and unabsorbed substances of roti and dal are passed on to the large intestine for defecation (egestion of faeces).

2.What are the various enzymatic types of glandular secretions in our gut helping digestion of food? What is the nature of end products obtained after complete digestion of food?
Solution. ln the buccal cavity, saliva secreted by the salivary glands contains salivary amylase that acts as follows:

Gastric juice of the stomach contains proenzyme pepsinogen, which on exposure to hydrochloric acid gets converted into active enzyme, pepsin. Pepsin is a proteolytic enzyme that converts proteins into proteoses and peptones. Rennin is a proteolytic enzyme found in the gastric juice of infants which helps in the digestion of milk proteins. Small amounts of lipases are also secreted by gastric glands. 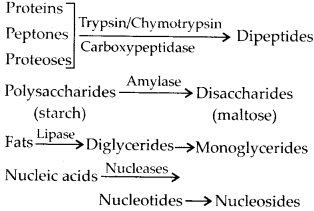 Bile secreted by liver does not contain any enzyme. It only helps in emulsification of fats and activation of lipases.
In the duodenum of the small intestine, the enzymes of the succus entericus act on the end products of the above reactions to form the respective simple absorbable form. 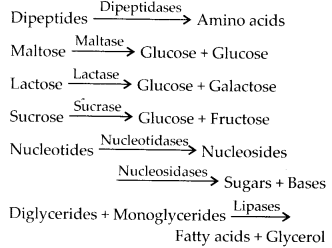 3.Discuss mechanisms of absorption.
Solution. Absorption is the process by which the end products of digestion pass through the intestinal mucosa into the blood or lymph. It is carried out by passive, active or facilitated transport mechanisms. Small amounts of monosaccharides like glucose, amino acids and some of electrolytes like chloride ions are absorbed by simple diffusion. Some of the substances like fructose and some amino acids are absorbed with the help of the carrier ions like Na+ by the mechanism known as facilitated transport. Water is transported along osmotic gradient. Various nutrients like amino acids, monosaccharides like glucose, electrolytes like Na+ are absorbed by active transport.
Fatty acids and glycerol are insoluble, thus they cannot be absorbed into the blood. They are first incorporated into small droplets called micelles which move info the. intestinal mucosa. They are reformed into very small protein coated fat globules called the chylomicrons which are transported into the lacteals in the villi. The lacteals ultimately release the absorbed substances into the blood stream. The maximum absorption of food takes place in small intestine.

4.Discuss the role of hepato – pancreatic complex in digestion of carbohydrate, protein and fat components of food.
Solution.The hepato-pancreatic complex is common duct for pancreatic duct and bile duct, which opens into duodenum. It is guarded by a sphincter called the sphincter of Oddi. Pancreatic juice contains enzymes for digestion of starch, proteins and fats. Bile helps in emulsification of fats only.
Starch digesting enzyme of pancreatic juice, called pancreatic amylase converts starch into maltose, isomaltose and a-dextrins. Three proenzymes present in pancreatic juice; trypsinogen, chymotrypsinogen and procarboxypeptidase are concerned with protein digestion.

Bile provide alkaline medium required for various reactions Bile salts break down fats into small fat droplets, by process called emulsification. Bile increases lipase action on fats. Pancreatic lipase is the principal enzyme for digestion of fats. It converts emulsified fats (triglycerides) into diglycerides and then into monoglycerides and release a fatty acid at each step. 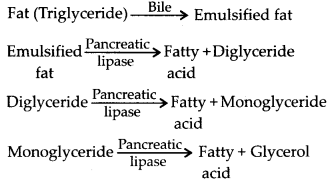 5. Explain the process of digestion in the buccal cavity with a note on the arrangement of teeth.
Solution. The buccal cavity has a number of teeth. Each tooth is embedded in a socket of jaw bone. This type of attachment is called thecodont. Human beings have diphyodont type of teeth which means that they have two sets of teeth during their life, a set of temporary milk or deciduous teeth replaced by a set of permanent or adult teeth. An adult human has 32 permanent teeth which are of four types : incisors (i), canines (c), premolars (pm) and molars (m). This type of dentition is called heterodont dentition. Arrangement of teeth in each half of the upper and lower jaw in the order i, c, pm, m is represented by  a dental formula, which in human is 2123 /2123?  Surface of the teeth is made up of a hard substance called enamel, which helps in the mastication of food. 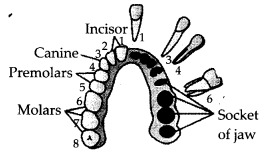 Fig.: Arrangement of different types of teeth in the jaws on one side and the sockets on the other side.
The buccal cavity performs two major functions: mastication of food and facilitation of swallowing. The salivary glands secrete saliva in the buccal cavity. The teeth and tongue with the help of saliva masticate and mix up the food thoroughly and convert it into a bolus. The saliva contains, electrolytes like Na+, K+, Cl-, HC03- and enzymes, salivary amylase and lysozyme. Salivary amylase is a starch digesting enzyme that acts upon the starch present in the food. About 30% of the starch is hydrolysed in the buccal cavity by this enzyme (pH 6.8) into a dissacharide-maltose.

Lysozyme is an antibacterial agent that acts on bacteria that have come along with the food.