Multiple Choice Questions
1.The following substances are the excretory products in animals. Choose the least toxic among them.
(a) Urea           (b) Uric acid
(c) Ammonia (d) Carbon dioxide
Solution. (b): Nitrogenous waste substances such as ammonia, urea or uric acid are produced during protein metabolism according to the species. Small amount of nitrogenous waste substances are also produced during the metabolism of nucleic acids. Ammonia is the most toxic, followed by urea and uric acid. The latter is the least toxic.

8.The condition of accumulation of urea in the blood is termed as
(a) Renal calculi (b) Glomerulonephritis
(c) Uremia          (d) Ketonuria.
Solution. (c) : In uremia, concentration of urea goes high in blood because the tubules are not able to remove it from blood.

12.We can produce concentrated/ dilute urine. This is facilitated by a special mechanism. Identify the mechanism.
(a) Reabsorption from PCT
(b) Reabsorption from collecting duct
(c) Reabsorption/ Secretion in DCT
(d) Counter current mechanism in Henle’s loop/ Vasa recta
Solution.(d) : The counter current mechanism helps to concentrate the filtrate which occurs in loop of Henle and vasa recta in the medulla region of the kidney. This gradient is mainly caused by NaCl and urea. It helps in easy absorption of water from the filtrate present in the collecting duct so that the concentration of the filtrate (urine) is increased. Therefore,hypertonic urine is produced in human beings.

13. Dialysing unit (artificial kidney) contains a fluid which is almost same as plasma except that it has ‘
(a) High glucose (b) High urea
(c) No urea (d) High uric acid.
Solution. (c) : Artificial kidney, called dialysing unit, is a machine that is used to filter the blood . of a person whose kidneys are damaged. The process is called haemodialysis. Dialysing unit has a cellophane tube suspended in a salt-water solution of the same composition as the normal blood plasma, except that no urea is present. Blood of the patient is pumped from one of the arteries into the cellophane tube. Pores of the cellophane tube allow urea, uric acid, creatinine, excess salts and excessH+ ions to diffuse from the blood into the surrounding solution. The blood thus purified is then pumped into a vein of the patient.

5.What is the excretory structure in Amoeba?
Solution. Contractile vacuole performs the function of excretion as well as osmoregulation in Amoeba.

6.The following abbreviations are used in the context of excretory functions, what do they stand for?
(a) ANF (b) ADH
(c) GFR (d) DCT
Solution.(a) Atrial Natriuretic Factor
(b) Antidiuretic Hormone
(c) Glomerular Filtration Rate
(d) Distal Convoluted Tubule

8.What is the role of sebaceous glands?
Solution.‘Sebaceous glands eliminate certain substances like sterols, hydrocarbons and waxes through sebum. This secretion provides a protective, oily covering for the skin. 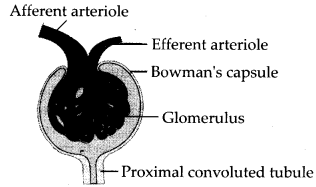 3.Aquatic animals generally are ammonotelic in nature whereas terrestrial forms are not. Comment.
Solution. Aquatic animals like bony fishes, aquatic amphibians and aquatic insects exerete ammonia i.e,, they are ammonotelic in nature. This is because ammonia is highly toxic and is readily soluble in water. It is generally excreted by diffusion across body surfaces or through gill surfaces (in fish) as ammonium ions. Excretion of nitrogenous wastes in the form of urea requires a lot of water. Terrestrial animals cannot afford to lose so much of water, thus they convert ammonia into urea or uric acid which are less toxic and can be stored in body for longer.
Terrestrial amphibians and mammals mainly exerete urea and are called ureotelic animals while reptiles, birds, land snails excrete uric acid and are called uricotelic animals. Urea and uric acid are less soluble in water and can be excreted with lesser loss of water. Thus, terrestrial adaptation necessitated the production of urea and uric acid for conservation of water.

6.How have the terrestrial organisms adapted themselves for conservation of water?
Solution.Refer answer 3.

7.Label the parts in the following diagram.

9.Comment upon the hormonal regulation of selective reabsorption.
Solution. An excessive loss of fluid from the body can activate the osmoreceptors present in the body which further stimulate the hypothalamus to release antidiuretic  hormone (ADH) from the neurohypophysis. ADH facilitates water reabsorption from the latter parts of the tubule. An increase in body fluid volume can switch off the osmoreceptors and suppress the ADH release to complete the feedback.
Angiotensin II also activates the adrenal cortex to release aldosterone. This hormone causes reabsorption of Na+ and water from the distal parts of the tubule. 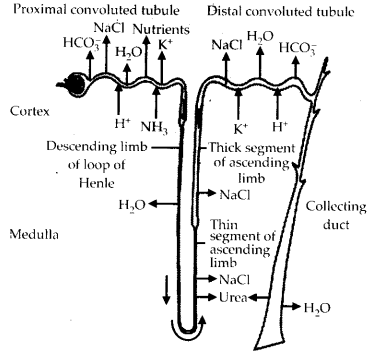 3.Explain briefly, micturition and disorders of the excretory system.
Solution. Micturition : The process of release of urine from urinary bladder is called micturition. A signal is initiated by the stretching of the urinary bladder as it gets filled with urine. In response, the stretch receptors on. the walls of the bladder send signals to the CNS. The CNS passes on motor messages to initiate the contraction of smooth muscles of the bladder and simultaneous relaxation of the urethral sphincter causing the release of urine.
Disorders of excretory system :
(i) Uremia – Accumulation of urea in blood is called uremia. Malfunctioning of kidneys can lead to uremia, which is highly harmful and may lead to kidney failure.
(ii)Renal calculi : Stone or insoluble mass of crystallised salts formed within the kidney are called renal calculi. They are commonly composed of calcium oxalate. They can cause pain if they cause obstruction and prevent urine flow in the ureter or kidney, or by direct irritation of the bladder.
(iii)Glomerulonephritis : It is inflammation of glomeruli of kidney.
can be represented in a diagram as follows. Arrows indicate direction of movement of materials.
Proximal convoluted tubule Distal convoluted tubule

4.How does tubular secretion help in maintaining ionic and acid-base balance in body fluids?
Solution.The cells of the renal tubule also excrete additional wastes from the blood stream into the filtrate by the process of tubular secretion. Creatinine, hippuric acid, pigments, drugs like pencillin are actively secreted into the PCT. Urea enters the thin segment of the ascending limb of loop of Henle by diffusion. Potassium, hydrogen ions, ammonia, HCO3 ions are secreted into the DCT by active transport.
Thus, tubular secretion is also an important step in urine formation as it helps in the maintenance of ionic and acid base balance of body fluids.

6.Describe the structure of a human kidney with the help of a labelled diagram.
Solution.Humans have of a pair of kidneys which are reddish brown, bean shaped structures situated between the levels of last thoracic and third lumbar vertebrae close to the dorsal inner wall of the abdominal cavity. Each kidney of an adult human measures 10-12 cm in length, 5-7 cm in width, 2-3 cm in thickness with an average weight of 120-170 gm. There is present a notch called hilum towards the centre of the inner concave surface of the kidney. Through the hilum, ureter, blood vessels and nerves enter. Inner to the hilum, is a broad funnel shaped space called the renal pelvis with projections called calyces. The layer on the outside of the kidney is a tough capsule. Inside the kidney, there are two zones, an outer cortex and an inner medulla. The medulla is divided into a few conical masses called medullary pyramids projecting into the calyces. The cortex extends in between the medullary pyramids as renal columns called columns of Bertin. The medullary pyramids are connected with minor calyces (sine, calyx) which in turn lead into major calyces. A human kidney possesses two to three major calyces. Major calyces open into renal pelvis which in turn leads to ureter. A kidney has about ten lakh nephrons. A longitudinal section of a human kidney in diagrammatic view is as follows: 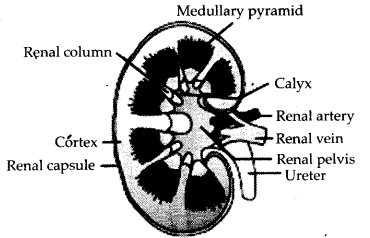