Multiple Choice Questions
1. The ultimate electron acceptor of respiration in an aerobic organism is

(a) cytochrome (b) oxygen
(c) hydrogen (d) glucose.
Solution. (b): The electron transport chain catalyses an electron flow from NADH (FADH2) to oxygen, which is the final electron acceptor of the respiratory process. It accepts a pair of electron and combines with hydrogen atom to form water molecule

4.Electron Transport System (ETS) is located in mitochondrial
(a) outer membrane
(b) inter membrane space
(c) inner membrane
(d) matrix.
Solution.(c) : An electron transport system (ETS) or electron transport chain (ETC) is a series of coenzymes and cytochromes that take part in the passage of electrons from one carrier to another and to its ultimate acceptor. The various components of ETS are arranged in five kinds of complexes, arranged in a definite sequence in the inner mitochondrial

5.Which of the following exhibits the highest rate of respiration?
(a) Growing shoot apex
(b) Germinating seed
(c) Root tip
(d) Leaf bud
Solution. (b): Different tissues and organs respire at different rates. A useful rule of thumb is that the greater the overall metabolic activity of a given tissue, the higher is its respiration rate. Germinating seeds exhibit the highest rate of respiration. Developing buds usually show very high rates of respiration and respiration rates of vegetative tissues usually decrease from the point of growth to more differentiated regions. When a plant tissue has reached maturity, its respiration rate will either remain roughly constant or decrease slowly as the tissue ages and ultimately senescences.

6.Choose the correct statement:
(a) Pyruvate is formed in the mitochondrial matrix.
(b) During the conversion of succinyl CoA to succinic acid a molecule of ATP is synthesised.
(c) Oxygen is vital in respiration for removal of hydrogen.
(d) There is complete breakdown of glucose in fermentation.
Solution.(c)

Short Answer Type Questions
1.Energy is released during the oxidation of compounds in respiration. How is this energy stored and released as and when it is needed?
Solution.Energy is stored as bond energy of ATP.

3.Different substrates get oxidised during respiration. How does Respiratory Quotient (RQ) indicate which type of substrate, i.e., carbohydrate, fat or protein is getting oxidised?
R.Q.=A/B
What do A and B stand for?
What type of substrates have R.Q. of 1,<1 or >1 ?
Solution. In RQ, A denotes C02 being released while B is 02 being consumed by unit mass of substrate. The ratio or quotient indicates the type of substrate being consumed in respiration.
R.Q. of 1 indicates aerobic respiration with carbohydrate as substrate.
RQ of < 1 (less than unity) occurs when protein or fat is being oxidised aerobically. RQ of > 1 (more than unity) is found in aerobic breakdown of organic acids.

3.Pyruvic acid is the end product of glycolysis. What are the three metabolic fates of pyruvic acid under aerobic and anaerobic conditions? Write in the space provided in the diagram. 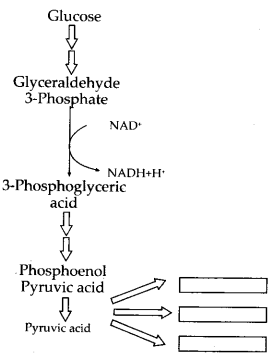 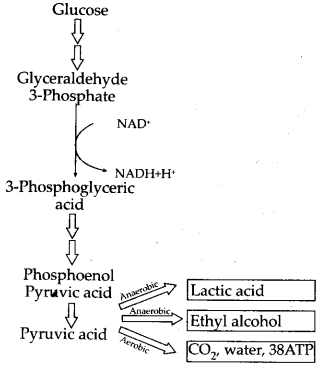 plants, when if the soil gets waterlogged, then plants obtain their energy through anaerobic respiration.

5.Oxygen is an essential requirement for aerobic respiration but it enters the respiratory process at the end. Discuss.
Solution. If Aerobic respiration is stepwise catabolic process of complete oxidation of organic food into carbon dioxide and water with oxygen acting as terminal oxidant. This is possible only if respiratory substrate is degraded step ¬wise enzymatically with the help of oxygen. Aerobic respiration requires oxygen in order to generate ATP. Oxygen is employed in the end to oxidise protons and produces water. So, oxygen acts as the final acceptor.

8.The figure given below shows the steps in glycolysis. Fill in the missing steps A, B, C, D and also indicate whether ATP is being used up or released at step E? 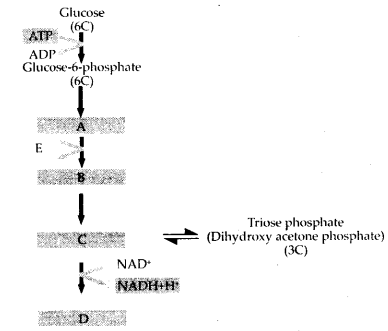 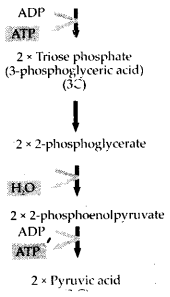 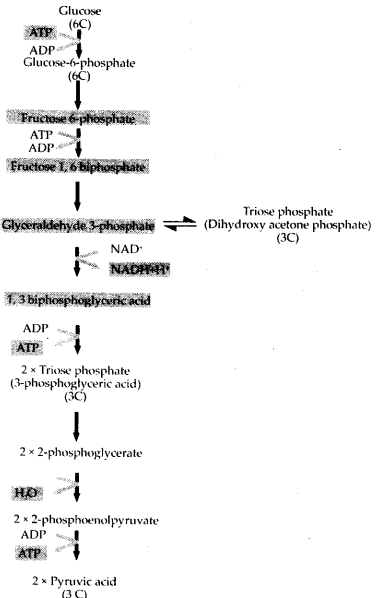 At step E, energy is being used up.

13.ln a way green plants and cyanobacteria have synthesised all the food on the earth. Comment.
Solution. Cyanobacteria are unicellular prokaryotic organisms. They contain thylakoid (chromoplasm) and the membranes of thylakoid contains chlorophyll a, carotenes, xanthophylls, phycocyanin, allophycocyanin and phycoerythrin.
These pigments enable them to manufacture food for themselves and aquatic animals. Green plants are multicellular organisms
capable of making food by using C02  , H20 and light energy in special cell organelles called chloroplast. So, bacteria and green plants make food for living organisms on earth.

14. When a substrate is being metabolised, why does not all the energy that is produced get released in one step? It is released in multiple steps. What is the advantage of step-wise release?
Solution. A single step release of large amount of energy will be harmful to the cell as most of it will remain unutilised and would cause damage to cellular organisation.
Step-wise release of small amount of energy is useful as:
1. It can be trapped and stored for later use.
2.There will be little wastage. ‘
3.Process of energy release can be controlled as per requirement.
4.It produces a number of intermediates which are used for synthesis of several types of substances.

16.lt is known that red muscle fibres in animals can work for longer periods of time continuously. How is this possible?
Solution. Red muscle fibres are contain a dark red and  02 storing and transporting pigment called myoglobin. Myoglobin binds and stores oxygen as oxymyoglobin in the red fibres. Oxymyoglobin releases oxygen for utilisation during muscle contraction. These fibres contain more mitochondria and less sarcoplasmic reticulum. So they work for longer periods of time.

19. How does a tree trunk exchange gases with the environment although it lacks stomata?
Solution. The old tree trunk is covered by dead woody tissue called cork. Lenticels are aerating pores present in the bark of the trunk, which take part in exchange of gases between the trunk and the outside air. It is filled up by loosely arranged thin walled rounded and suberised or unsuberised cells called complementary cells. They enclose intercellular spaces for gaseous exchange.

21 .Name the site (s) of pyruvate synthesis. Also, write the chemical reaction wherein pyruvic acid dehydrogenase acts as a catalyst.
Solution. The site of pyruvate synthesis is cytoplasm. It is end product of the glycolysis. The reaction where pyruvic acid dehydrogenase acts as a catalyst is the link reaction or gateway step which occur inside mitochondria. Here pyruvate undergoes oxidative . decarboxylation (removal of hydrogen and C02) in the presence of CoA.
Pyruvate + CoA +NAD+

4.Formation of a-ketoglutarate or oxidative decarboxylation of isocitrate:

(b) Events of aerobic respiration that occurs in the inner mitochondrial membrane are as follows:
(i) Oxidation of succinate :

23.Respiratory pathway is believed to be a catabolic pathway. However, nature of TCA cycle is amphibolic. Explain.
Solution. Refer Answer 9.

Long Answer Type Questions
1.In the following flow chart, replace the symbols a,b,c and d with appropriate terms. Briefly explain the process and give any two application of it. 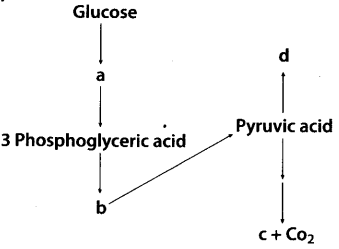 Solution.
a = Glyceraldehyde 3-phosphate
b = Phosphoenol pyruvic acid
c = Ethanol
d = Lactic acid
The given metabolic pathway in figure is anaerobic respiration or fermentation. Anaerobic respiration is an enzyme mediated energy liberating catabolic process of step-wise but incomplete breakdown of organic substrate without using oxygen as an oxidant. Energy is liberated during breaking of bonds between various types of atoms. The common products of anaerobic respiration are C02, ethyl alcohol and lactic acid.

(i) Alcoholic fermentation : It takes place in two steps:

It produces lactic acid from pyruvate and does not release carbon dioxide. Application of anaerobic respiration are as follows:
(i) It has important role in brewing (Saccharomyces cerevisiae), baking, vinegar and milk industries (Streptococcus lactis). Vinegar is produced by fermentation of sugars in the presence of acetic acid bacteria (Acetobacter aceti).
(ii) Production of industrial alcohols and organic acids like citric acid and malic acid.

2.Given below is a diagram showing ATP synthesis during aerobic respiration, replace the symbols A, B, C, D and E by appropriate terms given in the box. 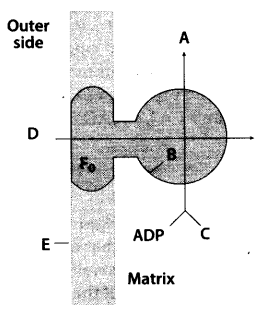 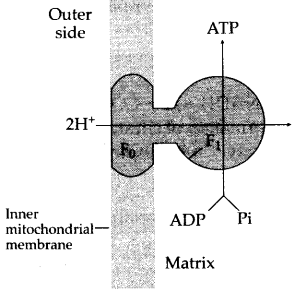 3.Oxygen is critical for aerobic respiration. Explain its role with respect to ETS.
Solution. The oxidation of glucose starts with glycolysis in cytoplasm, then followed by Krebs’ cycle in matrix of mitochondria and finally electron transport chain (ETC) in inner mitochondrial membrane. The requirement of oxygen is at the end of ETC. An electron transport chain or system is a series of coenzymes arid cytochromes that take part in passage of electrons from a chemical to its ultimate acceptor. At the end of electron transport chain the electrons are given to oxygen. At the same time
oxygen accepts hydrogen ions to form water. This happens in the matrix, on the surface of the inner membrane. This is the only stage at which oxygen is used in cell respiration. If oxygen is not available, electron flow along the electron transport chain stops and NADH + H+ cannot be reconverted to  NAD+. Supplies of  NAD+ in the mitochondrion run out and the link reaction and Krebs’ cycle cannot continue. Glycolysis can continue because conversion of pyruvate into lactate or ethanol and carbon dioxide produces as much  NAD+ as is used in glycolysis. Whereas aerobic respiration gives a yield of about 38 ATP molecules per glucose, glycolysis produces only two. Oxygen thus greatly increases the ATP yield. The figure (below) shows the electron transport chain and the role of oxygen as terminal electron acceptor.

5.Give an account of glycolysis. Where does it occur? What are the end products? Trace the fate of these products in both aerobic and anaerobic respiration.
Solution. Glycolysis (Gk. Glycos-sugar, lysis-breaking) is the sequence of reactions or pathway by which glucose is degraded anaerobically to form pyruvic acid. Glycolysis was discovered by three German scientists Embden, Meyerhof and Parnas, so also called EMP pathway. It is divided into two phases-preparatory phase and an pay off phase. In the preparatory phase, breakdown of glucose and low energy phosphorylation occurs, and energy is expended. In the oxidative phase high energy phosphate bonds are formed and energy is released. Glycolysis occur in the cytoplasm of
the cell and is present in all living organisms. End product of glycolysis is two molecules of pyruvic acid. During aerobic respiration, the pyruvic acid enters Kerbs’ cycle and finally electron transport chain. So it produces 38 ATP molecules. During anaerobic respiration, it produces lactic acid or ethyl alcohol and produces 2ATP molecules. 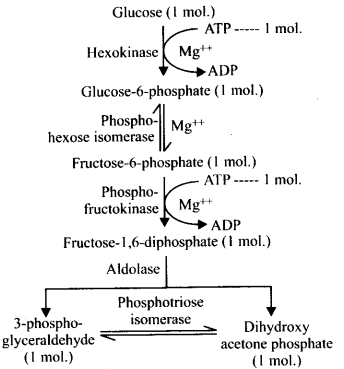 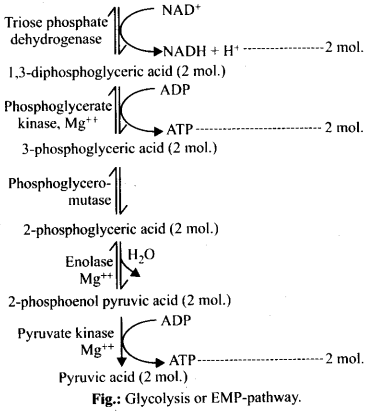