2.To which one of the.following categories does adipose tissue belong?
(a) Epithelial
(b) Connective
(c) Muscular
(d) Neural
Soln.: Adipose tissue is a fat-storing loose connective tissue found subcutaneously, around the heart, kidney, eyeballs, mesenteries,etc. It is also found in blubber of whales and humps of camels. Subcutaneous fat prevents loss of heat from the body.

5.Setae help in locomotion in earthworm but are not uniformly present in all the segments. Select among the following that represents setae.
(a) 1segment
(b) Last segment
(c) Clitellar segment
(d) 20th – 22nd segment
Soln.(d): In each body segment of earthworm, except the first, last and ditellum (segments 14-16), there are rows of setae, embedded in the epidermal pits in the middle of each segment. Setae helps in locomotion.

Short Answer Type Questions
1.State the number of segments in earthworm which are covered by a prominent dark band or clitellum.
Soln. 3 clitellar segments : 14,15 and 16

2.Where are sderites present in cockroach?
Soln. In each segment of cockroach body, i.e., head, thorax and abdomen, exoskeleton has hardened plates called sclerites, that are joined to each other by thin and flexible arthrodial membrane.

4.Identify the sex of a frog in which sound producing vocal sacs are present.
Soln. Male frog

5.Name the process by which a tadpole develops into an adult frog.
Soln. Metamorphosis

6.What is the scientific term given to earthworm’s body segments?
Soln. Metameres

9.Give two identifying features of an adult male frog.
Soln. Male frogs can be distinguished by the presence of sound producing vocal sacs and  copulatory pad on the first digit of forelimb, which are absent in female frogs.

10. Which mouth part of cockroach is comparable to our tongue?
Soln. Hypopharynx

Short Answer Type Questions
1.Give the location of hepatic caecae in a cockroach. What is their function?
Soln.Hepatic caecae are arise from the anterior end of midgut. They are present at junction of midgut and gizzard and are 6-8 in number. They are lined by the glandular cells which secrete digestive secretion containing amylolytic, proteolytic and lipolytic types of enzymes, which help in the digestion of carbohydrates, proteins and fats.

2.Frogs are beneficial for mankind, justify the statement.
Soln.Frogs are beneficial for mankind as they help in maintaining ecosystem, because they are involved in food chain. Frogs eat up insects which are harmful for crops and thus help in protecting the crop damage and saves expenditure on insecticides. In some parts of India and other countries, muscles of the legs of frog are used as food. Moreover, they are also used as an experimental material for teaching and research.

3.The body of sponges does not possess tissue level of organisation though it is made of thousands of cells. Comment.
Soln. Sponges show cellular level of body organisation, i.e., body consists of large number of cells but cells are loosely arranged and are not organised to form specific tissues specialised for particular function.

6.How does a gap junction facilitate intercellular communication?
Soln. Gap junctions are meant for chemical exchange between adjacent cells. They facilitate the cells to communicate with each other by connecting the cytoplasm of neighbouring cells for rapid transfer of ions, small molecules and sometimes big molecules.

8.Why are neurons called excitable cells? Mention special features of the membrane of the neuron?
Soln. Neurons are called excitable cellsbecause they have the ability to initiate nerve impulse in response to stimuli and transmits impulses in form of electrical and chemical signals. Neuronal membrane serve as barrier between cytoplasm of neuron and surrounding external medium. It helps to establish electrical potential as ion channels of membrane are selectively permeable to different ions. It also helps in impulse conduction and is sensitive to neurotransmitter and modulator.

9.Why earthworm is called the friend of farmer?
Soln. Earthworm is called the friend of farmer because it helps in making the soil loose and porous by burrowing, which in turn causes aeration and absorption of water by soil and thus, helps in respiration and penetration of the developing plant roots. Earthworms are also used in vermicomposting as worm castings are used as manure and increases soil fertility. Nitrogenous wastes of earthworms are used as plant food and they help in creating optimum conditions for plant growth by reducing acidity and alkalinity of soil.

11.Correct the wrong statements among the
following:
(a) In earthworm, a single male genital pore is present.
(b) Setae help in locomotion of earthworm.
(c) Muscular layer in the body wall of earth-worm is made up of only circular muscles.
(d) Typhlosole is the part of intestine of earthworm.
Soln. (a) In earthworm, a pair of male genital pores are present in segment 18.
(c) Muscular layer in the body wall of earthworm is made up of outer layer of circular muscles and inner layer of longitudinal muscles.

12.Why nephridia in earthworm that are basically similar in structure is classified into three types? Mention the names of each.
Soln. In earthworm nephridia perform the function of excretion and osmoregulation. Though nephridia are basically similar in structure, yet they are classified into three types according to their location:
(i) Septal nephridia: They are present from
fifteenth segment to last, there are 80 to 100 septal nephridia in each segment. The septal nephridia discharge their excretory matter into the lumen of the alimentary canal/enteron, thus, they are called enteronephric nephridia. ••••
(ii)
Pharyngeal nephridia: They occur in three pair of bunches in the 4th, 5th, and 6th segments. The ducts of the nephridia of the sixth segment open into the buccal cavity while the ducts from the nephridial bunches of the fourth and fifth segments open into the pharynx. These ducts carry excretory matter into the gut. Thus, are also known as enteronephric nephridia,
(iii)
Integumentary nephridia are found scattered in the body wall (integument)
in each segment except the first two segments. In each segment they number from 200 to 250 except in the fourteenth, fifteenth and sixteenth segments (clitellar region) where their number is about ten times more than that in the other segments. Thus, clitellar segments are often called as the “forest of nephridia”. These nephridia discharge their contents directly to the outside hence they are called ectonephric (= exonephric) nephridia.

15. Mention special features of eye in cockroach.
Soln.Cockroach has a pair of compound eyes situated on the dorsal surface of the head. Each eye consists of about 2000 hexagonal ommatidia, with the help of which a cockroach can receive several images of an object. This kind of vision is known as mosaic vision. Each ommatidium sees only small part of object, therefore, image formed by an eye as a whole consists of several pieces which are put together to make up whole picture received by the eye.

16. Frog is a poikilotherm, exhibits camouflage and undergoes aestivation and hibernation, how are all these beneficial to it?
Soln. Frog is a poikilotherm (cold blooded), i.e., it cannot maintain constant body temperature and it varies with change in environmental temperature. Being cold blooded, frog cannot withstand very cold weather and extreme high temperature and thus burries itself deep in mud during winters and summers, known as hibernation (winter-sleep) and aestivation (summer sleep) respectively. These periods are of little activities and energy required is obtained from fat bodies, or stored glycogen in liver, which have been stored earlier. Camouflage is the ability to change body colour with change in its surroundings and climatic conditions. It helps the animal to escape from predators or to attack its prey.

20.What is special about tissue present in the heart?
Soln.Heart contain cardiac muscle tissue. Cardiac muscle fibres are cylindrical, branched, uninucleated (nucleus present near the centre). Fibres have transverse light and dark bands, alternating with each other. Cardiac muscle fibres also have intercalated discs between two adjacent fibres, to transmit wave of contraction from one cardiac fibre to another. Heart muscle is involuntary and never get fatigued.

2.Write down the common features of the connective tissue. On the basis of structure and function, differentiate between bones and cartilages.
Soln. Common features of connective tissue are :
(i) Connective tissue is the most abundant and widely distributed tissue of the body. It connects tissues organs and also provides support to various body parts.
(ii) Connective tissue is developed from the embryonic mesoderm.
(iii) Three components are majority present in the connective tissue: matrix, cells and fibres.
(iv) The extracellular matrix has nearly amorphous ground substance made of glycoproteins with associated muco-polysaccharides. This ground substance may be liquid, gel or solid.
(v) The tissue has good amount of regenerative ability.
Differences between bone and cartilage are: 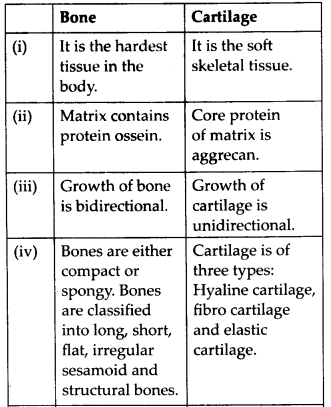 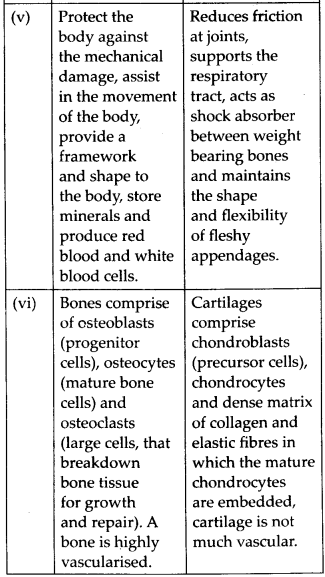 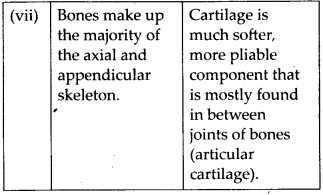 3.Comment upon the gametic exchange in earthworm during mating.
Soln. Earthworm is hermaphrodite i.e., both testes and ovaries are present in the same individual. But self-fertilisation does not occur as the testes and ovaries do not mature at the same time. Thus, cross-fertilisation takes place. Two worms attach themselves with their ventral surfaces and become opposed to each other in opposite direction. During copulation male genital papilla of one earthworm is inserted into the spermathecal pore of the other earthworm to transfer the sperms and prostatic fluid. After copulation two earthworms separate. Now the glandular cells of the clitellum secrete a fluid that forms a girdle around the clitellum. The girdle is filled with mature ova released through female genital pore. The worm wriggles backwards. When the girdle passes over the spermathecal pores it receives the sperms stored in the spermathecae and albuminous secretion of the epidermal gland cells of skin. Ultimately, the worm wriggles out completely and the girdle is, therefore, left free in moist soil. Now this structure is called cocoon. Fertilisation and development occur inside the cocoon and on an average four baby worms are produced in one cocoon.

4.Explain the digestive system of cockroach with the help of a labelled sketch.
Soln.The cockroach has well developed digestive system consisting of alimentary canal and associated digestive glands. Alimentary canal is divided into three regions: foregut, midgut and hindgut. Foregut consists of mouth, pharynx, oesophagus, crop and gizzard. Mouth, a narrow opening opens into a short tube-like structure called pharynx which further leads into tubular passage called oesophagus. Oesophagus opens into a pear-shaped structure called crop which is used for storing the food. The crop leads into gizzard which has an outer of layer strong circular muscles and inner cuticle forming six teeth which help in grinding the food particles. Foregut is followed by midgut where digestion and absorption of food takes place. At junction of midgut and gizzard six to eight finger-like structures called hepatic caecae are present and 100-150 yellow fine thread-like structures called Malpighian tubules are present at junction of midgut and 5. hindgut.
The hindgut is differentiated into ileum, colon, rectum and anus.
Digestive glands include the following:
(i) There are paired salivary glands, one on each side of oesophagus and crop. They secrete saliva which contains enzymes amylase, chitinase and cellulase.
(ii) Hepatic caecae lined by glandular cells secrete digestive secretions containing amylolytic, lipolytic and proteolytic enzymes.
(iii) Midgut lining-glandular epithelial cells lining midgut secrete digestive secretion containing proteoloytic, amylolytic and lipolytic enzymes. 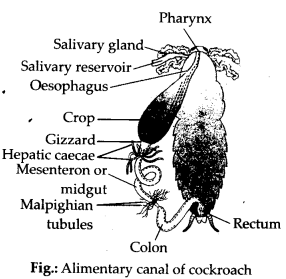 5.Draw a neat and well labelled diagram of male reproductive system of a frog.
Soln. 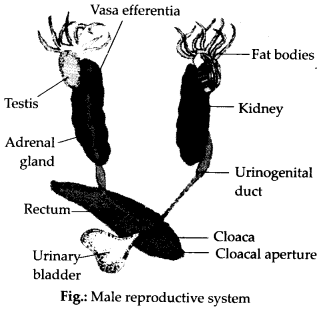