Q2. To which one of the following categories does adipose tissue belong?
(a) Epithelial
(b) Connective
(c) Muscular
(d) Neural
Ans: (b) Loose connective tissue has cells and fibres loosely arranged in a semi ¬fluid ground substance, for example, areolar tissue present beneath the skin. Adipose tissue is a type of loose connective tissue located mainly beneath the skin.

Q7. Match the following and choose the correct option.

Q8. Match the following and choose the correct answer.

Q9. Match the following with reference to cockroach and choose the correct option.

10. Match the followings and choose the correct answer.

Q1. State the number of segments in earthworm which are covered by a prominent dark band or clitellum.
Ans: 14thâ€”16th segments.

Q2. Where are sclerites present in Cockroach?
Ans: In each segment of the body of cockroach, exoskeleton has hardened plates called sclerites.

Q4. Identify the sex of a frog in which sound producing vocal sacs are present.
Ans: Male frog

Q6. What is the scientific term given to earthworm’s body segments?
Ans: Metamers

Q9. Give two identifying features of an adult male frog.
Ans: a. Vocal Sacs
b. Thumb pads/copulatory pads in thumb

Q10. Which mouth part of cockroach is comparable to our tongue?
Ans: Hypopharynx

Q1. Give the location of hepatic caeca in a Cockroach. What is their function?
Ans: A ring of 6-8 blind tubules called hepatic caeca are present at the junction of foregut and midgut. Hepatic caeca secretes digestive juice.

Q4. Structural organisation in animals attains different levels as cellâ€”organâ€” organ system. What is missing in this chain? Mention the significance of such an organisation.
Ans: Tissue is missing in this chain. In multicellular animals, a group of similar cells along with intercellular substances perform a specific function. Such an organisation is called tissue. Tissues are organised in specific proportion and pattern to form an organ like stomach, lung, heart and kidney. When two or more organs perform a common function by their physical and/or chemical interaction, they together form organ system, e.g., digestive system, respiratory system, etc. Cells, tissues, organs and organ systems split up the work in a way that exhibits division of labour and contribute to the survival of the body as a whole.

Q6. How does a gap junction facilitate intercellular communication?
Ans: Gap junctions facilitate the cells to communicate with each other by connecting the cytoplasm of adjoining cells, for rapid transfer of ions, small molecules and sometimes big molecules.

Q8. Why are neurons called excitable cells? Mention special features of the membrane of the neuron?
Ans: Neurons are called excitable cells because when a neuron is suitably stimulated, an electrical disturbance is generated which swiftly travels along its plasma membrane. Arrival of the disturbance at the neuron’s endings, or output zone, triggers events that may cause stimulation or inhibition of adjacent neurons and other cells.

Q9. Why earthworm is called the friend of farmer?
Ans: Earthworms are known as â€˜friends of farmers’ because they make burrows in the soil and make it porous which helps in respiration and penetration of the developing plant roots. The process of increasing fertility of soil by the earthworms is called vermicomposting.

Q12. Why nephridia in earthworm that are basically similar in structure classified into three types? Mention the names of each.
Ans: The excretory organs occur as segmentally arranged coiled tubules called nephridia (sing.: nephridium). They are of three types: (i) septal nephridia, present on both the sides of intersegmental septa of segment 15 to the last that open into intestine, (ii) integumentary nephridia, attached to lining of the body wall of segment 3 to the last that open on the body surface and (iii) pharyngeal nephridia, present as three paired tufts in the 4th, 5th and 6th segments. These different types of nephridia are basically similar in structure.
Nephridia regulate the volume and composition of the body fluids. A nephridium starts out as a funnel that collects excess fluid from coelomic chamber. The funnel connects with a tubular part of the nephridium which delivers the wastes through a pore to the surface in the body wall into the digestive tube.

Q13. Common name of some animals are given in Column A, write their scientific name in Column B.

Q15. Mention special features of eye in Cockroach.
Ans: The compound eyes are situated at the dorsal surface of the head. Each eye consists of about 2000 hexagonal ommatidia (sing.: ommatidium). With the help of several ommatidia, a cockroach can receive several images of an object. This kind of vision is known as mosaic vision with more sensitivity but less resolution, being common during night (hence called nocturnal vision).

Q16. Frog is a poikilotherm, exhibits camouflage and undergoes aestivation and hibernation, how are all these beneficial to it?
Ans: Frog have the ability to change colour which hides them from their enemies (camouflage). This protective coloration is called mimicry.
Frogs are not seen during peak summer and winter. During this period they take shelter in deep burrows to protect them from extreme heat and cold. This is called as summer sleep (aestivation) and winter sleep (hibernation).

Q17. Write the functions in brief in column B, appropriate to the structures given in column A.

Q18. Write the appropriate type of tissues in column B according to the functions mentioned in column A.

Q19. Using appropriate examples, differentiate between false and true body segmentation.
Ans: (i) Metamerism: In some animals, the body is externally and internally divided into segments with a serial repetition of at least some organs. For example, in earthworm, the body shows this pattern called metameric segmentation and the phenomenon is known as metamerism or true segmentation.
Metamerism is found in 3 animal phylumsâ€”Annelida, Arthropoda and chordata.
(ii) Pseudometamerism or false segmentation: In tapeworm, the body is externally divisible into parts called proglottis. They develop from the neck but are not embryonic in origin, this segmentation is called pseudometamerism.

Q20. What is special about tissue present in the heart?
Ans: Cardiac muscle tissue is a contractile tissue present only in the heart. Cell junctions fuse the plasma membranes of cardiac muscle cells and make them stick together. Communication junctions (intercalated discs) at some fusion points allow the cells to contract as a unit, i.e. when one cell receives a signal to contract, its neighbours are also stimulated to contract.

Q1. Classify and describe epithelial tissue on the basis of structural modifications of cells.
Ans: There are two types of epithelial tissues namely simple epithelium and compound epithelium. Simple epithelium is composed of a single layer of cells and functions as a lining for body cavities, ducts, and tubes. The compound epithelium consists of two or more cell layers and has protective function as it does in our skin. On the basis of structural modification of the cells, simple epithelium is further divided into three types. These are (i) Squamous, (ii) Cuboidal and (iii) Columnar
• The squamous epithelium is made of a single thin layer of flattened cells with irregular boundaries. They are found in the walls of blood vessels and air sacs of lungs and are involved in functions like forming a diffusion boundary. The cuboidal epithelium is composed of a single layer of cube-like cells. This is commonly found in ducts of glands and tubular parts of nephrons in kidneys and its main functions are secretion and absorption. The epithelium of proximal convoluted tubule (PCT) of nephron in the kidney has microvilli. The columnar epithelium is composed of a single layer of tall and slender cells. Their nuclei are located at the base. Free surface may have microvilli. They are found in the lining of stomach and intestine and help in secretion and absorption.
• Compound epithelium is made of more than one layer (multi-layered) of cells and thus has a limited role in secretion and absorption. Their main function is to provide protection against chemical and mechanical stresses. They cover the dry surface of the skin, the moist surface of buccal cavity, pharynx, inner lining of ducts of salivary glands and of pancreatic ducts.

Q2. Write down the common features of the connective tissue. On the basis of structure and function, differentiate between bones and cartilages. .
Ans: Connective tissues are most abundant and widely distributed in the body of complex animals. They are named connective tissues because of their special function of linking and supporting other tissues/organs of the body. They range from soft connective tissues to specialised types, which include cartilage, bone, adipose, and blood. In all connective tissues except blood, the cells secrete fibres of structural proteins called collagen or elastin. The fibres provide strength, elasticity and flexibility to the tissue. These cells also
secrete modified polysaccharides, which accumulate between cells and fibres and act as matrix (ground substance).
• The intercellular material of cartilage is solid and pliable and resists compression. Cells of this tissue (chondrocytes) are enclosed in small cavities within the matrix secreted by them. Most of the cartilages in vertebrate embryos are replaced by bones in adults. Cartilage is present in the tip of nose, outer ear joints, between adjacent bones of the vertebral column, limbs and hands in adults.
• Bones have a hard and non-pliable ground substance rich in calcium salts and collagen fibres which give bone its strength. It is the main tissue that provides structural frame to the body. Bones support and protect softer tissues and organs. The bone cells (osteocytes) are present in the spaces called lacunae. Limb bones, such as the long bones of the legs, serve weight-bearing functions. They also interact with skeletal muscles attached to them to bring about movements. The bone marrow in some bones is the site of production of blood cells.

Q3. Comment upon the gametic exchange in earthworm during mating.
Ans: A mutual exchange of sperm occurs between two worms during mating. One worm has to find another worm and they mate juxtaposing opposite gonadal openings exchanging packets of sperms called spermatophores. Mature sperm and egg cells, and nutritive fluid are deposited in cocoons produced by the gland cells of clitellum. Fertilisation and development occur within the cocoons which are deposited in soil. The ova (eggs) are fertilised by the sperm cells within the cocoon which then slips off the worm and is deposited in or on the soil. The cocoon holds the worm embryos. After about 3 weeks, each cocoon produces two to twenty baby worms with an average of four. Development of earthworms is direct, i.e. there is no larva formed.

Q4. Explain the digestive system of Cockroach with the help of a labelled sketch.
Ans: The digestive system consists of alimentary canal and digestive glands. The alimentary canal of cockroach is divided into foregut, midgut and hindgut. The mouth opens into a short tubular pharynx, leading to a narrow tubular passage, the oesophagus, which opens into a sac like crop used for storing food. The crop is followed by a gizzard or proventriculus. Gizzard consists of six chitinous plates called teeth which helps in grinding food. The entire foregut is lined by cuticle. A ring of six to eight blind tubular structures called hepatic or gastric caecae is present at the junction of foregut and midgut which secrete digestive juice. At the junction of midgut and hindgut is present another ring of yellow colored thin filamentous malpighian tubules which help in removal of excretory products from haemolymph. The hindgut is broader than midgut and is differentiated into ileum, colon and rectum. The rectum opens out through anus. 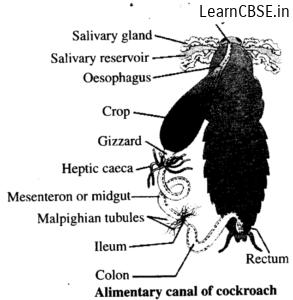 Q5. Draw a neat and well labelled diagram of male reproductive system of a frog. 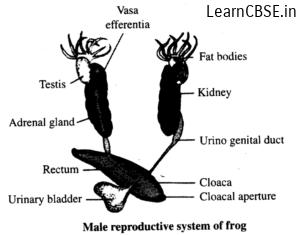