Q8. Match the following and choose the correct option from those given below.

Q3. Different substrates get oxidized during respiration. How does Respiratory Quotient (RQ) indicate which type of substrate, i.e., carbohydrate, fat or protein is getting oxidized? 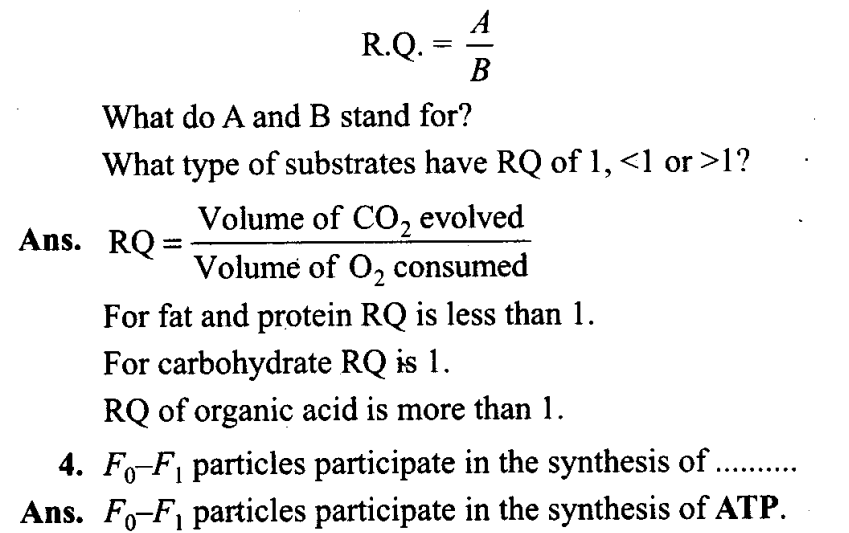 Q5. When does anaerobic respiration occur in man and yeast?
Ans: In alcoholic fermentation (by yeast), incomplete oxidation of glucose occurs under anaerobic conditions by sets of reactions where pyruvic acid is converted to ethanol and C02.
PA –> Ethanol + C02
In animal cells also, like muscles during exercise, when oxygen is inadequate for cellular respiration pyruvic acid is reduced to lactic acid.

Q1. If a person is feeling dizzy, glucose or fruit juice is given immediately but not a cheese sandwich, which might have more energy. Explain.
Ans: Glucose or fruit juice is absorbed easily through the alimentary canal. In the cells glucose is oxidised and energy is released immediately. A cheese sandwich provides energy after digestion and absorption which takes long time.

Q3. Pyruvic acid is the end product of glycolysis. What are the three metabolic fates of pyruvic acid under aerobic and anaerobic conditions? Write in the space provided in the diagram. 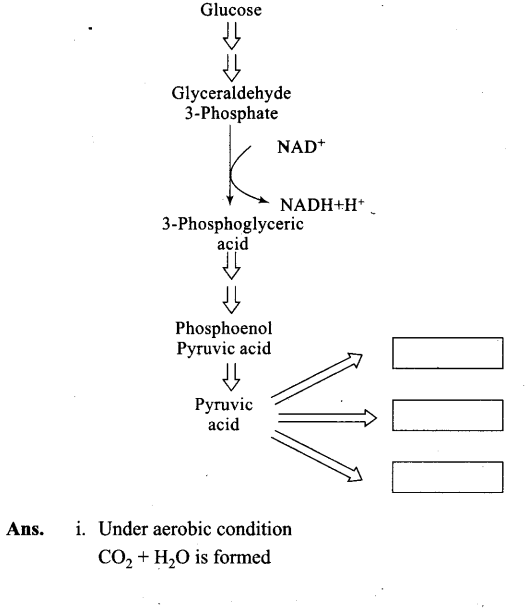 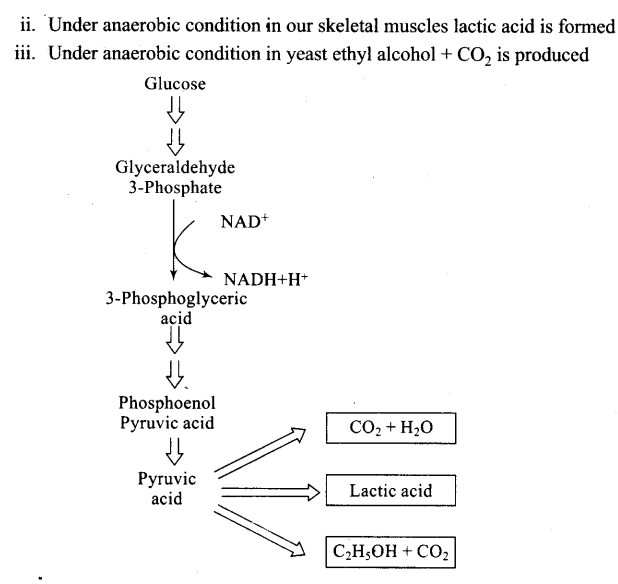 Q5. Oxygen is an essential requirement for aerobic respiration but it enters the respiratory process at the end? Discuss.
Ans: Although the aerobic process of respiration takes place only in the presence of oxygen, the role of oxygen is limited to the terminal stage of the process. Yet, the presence of oxygen is vital, since it drives the whole process by removing hydrogen from the system. Oxygen acts as the final hydrogen acceptor.

Q6. Respiration is an energy releasing and enzymatically controlled catabolic process which involves a step-wise oxidative breakdown of organic substances inside living cells. In this statement about respiration explain the meaning of
1. Step-wise oxidative breakdown and
2. Organic substances (used as substrates).
Ans: 1. Step-wise oxidative breakdown: During oxidation within a cell, all the energy contained in respiratory substrates is not released free into
the cell, or in a single step. It is released in a series of slow step-wise reactions controlled by enzymes, and it is trapped as chemical energy in the form of ATP. Hence, it is important to understand that the energy released by oxidation in respiration is not (or rather cannot be) used directly but is used to synthesise ATP, which is broken down whenever (and wherever) energy needs to be utilised.
2. Organic substances (used as substrates): The compounds that are oxidised during this process are known as respiratory substrates. Usually carbohydrates are oxidised to release energy, but proteins, fats and even organic acids can be used as respiratory substances in some plants, under certain conditions.

Q7. Comment on the statement – Respiration is an energy producing process but ATP is being used in some steps of the process.
Ans: In the respiration pathway, there are some steps where energy is utilised for phosphorylation. For example, conversion of glucose to glucose-6-phosphate consume one ATP. But at the end of the respiratory process many more ATP are produced.

Q8. The figure given below shows the steps in glycolysis. Fill in the missing steps A, B, C, D and also indicate whether ATP is being used up or released at step E? 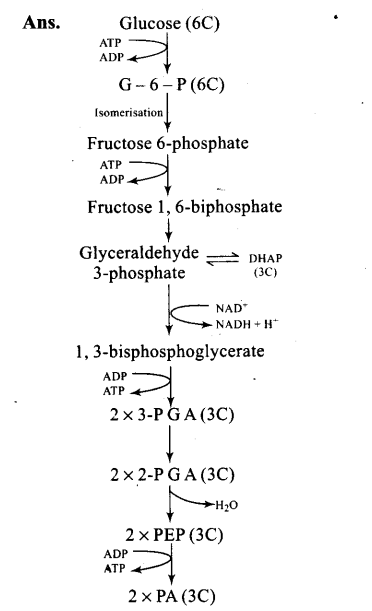 Q13. In a way green plants and cyanobacteria have synthesised all the food on the earth. Comment.
Ans: All the energy required for â€˜life’ processes is obtained by oxidation of some macromolecules that we call â€˜food’. Only green plants and cyanobacteria can prepare their own food; by the process of photosynthesis they trap light energy and convert it into chemical energy that is stored in the bonds of carbohydrates like glucose, sucrose and starch.

Q14. When a substrate is being metabolised, why does not all the energy that is produced get released in one step? It is released in multiple steps. What is the advantage of step-wise release?
Ans: The complete combustion of glucose, which produces C02 and H20 as end products, yields energy most of which is given out as heat.
C6H12O6  +  6O2  â€”> 6CO2+ 6H2O + Energy
If this energy is to be useful to the cell, it should be able to utilise it to synthesise other molecules that the cell requires. The strategy that the plant cell uses is to catabolise the glucose molecule in such a way that not all the liberated energy goes out as heat. The key is to oxidise glucose not in one step but. in several small steps enabling some steps to be just large enough such that the energy released can be coupled to ATP synthesis.

Q15. Respiration requires 02. How did the first cells on the earth manage to survive in an atmosphere that lacked 02?
Ans: During the process of respiration, oxygen is utilised, and carbon dioxide, water and energy are released as products. The combustion reaction requires oxygen. But some cells live where oxygen may or may not be available. There are sufficient reasons to believe that the first cells on this planet lived in an atmosphere that lacked oxygen. Even among present-day living organisms, we know of several that are adapted to anaerobic conditions.

Q16. It is known that red muscle fibres in animals can work for longer periods of time continuously. How is this possible?
Ans: Muscle contains a red coloured oxygen storing pigment called myoglobin. Myoglobin content is high in some of the muscles which gives a reddish appearance. Such muscles are called the Red fibres. These muscles also contain plenty of mitochondria which can utilise the large amount of oxygen stored in them for ATP production. These muscles, therefore, can also be called aerobic muscles.

Q19. How does a tree trunk exchange gases with the environment although it lacks stomata?
Ans: In stems, the â€˜living’ cells are organised in thin layers inside and beneath the bark. They also have openings called lenticels. The cells in the interior are dead and provide only mechanical support. Thus, most cells of a plant have at least a part of their surface in contact with air. This is also facilitated by the loose packing of parenchyma cells in leaves, stems and roots, which provide an interconnected network of air spaces.

The passing on of the electrons removed as part of the hydrogen atoms to molecular 02 with simultaneous synthesis of ATP. What is interesting to note is that the first process takes place in the matrix of the mitochondria while the second process is located on the inner membrane of the mitochondria.

Long Answer Type Questions
Q1. In the following flow chart, replace the symbols a,b,c and d with appropriate terms. Briefly explain the process and give any two application of it.

Q2. Given below is a diagram showing ATP synthesis during aerobic respiration, replace the symbols A, B,C,D and E by appropriate terms given in the box. 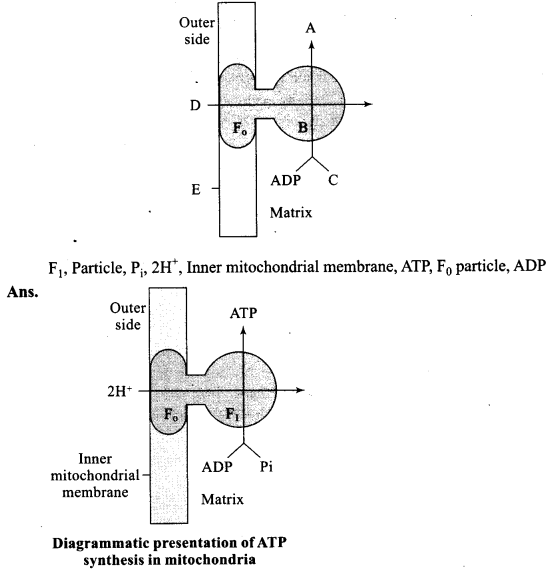 Q3. Oxygen is critical for aerobic respiration. Explain its role with respect to ETS.
Ans: Although the aerobic process of respiration takes place only in the presence of oxygen, the role of oxygen is limited to the terminal stage of the process. Yet, the presence of oxygen is vital, since it drives the whole process by removing hydrogen from the system. Oxygen acts as the final hydrogen acceptor. Unlike photophosphorylation where it is the light energy that is utilised for the production of proton gradient required for phosphorylation, in respiration it is the energy of oxidation-reduction utilised for the same process. It is for this reason that the process is called oxidative phosphorylation.

Q4. Enumerate the assumptions that we undertake in making the respiratory balance sheet. Are these assumptions valid for a living system? Compare fermentation and aerobic respiration in this context.
Ans: The Respiratory Balance Sheet:
It is possible to make calculations of the net gain of ATP for every glucose molecule oxidised; but in reality this can remain only a theoretical exercise. These calculations can be made only on certain assumptions that:
There is a sequential, orderly pathway functioning, with one substrate forming the next and with glycolysis, TCA cycle and ETS pathway following one after another.
The NADH synthesised in glycolysis is transferred into the mitochondria and undergoes oxidative phosphorylation.
None of the intermediates in the pathway are utilised to synthesise any other compound.
Only glucose is being respired – no other alternative substrates are entering in the pathway at any of the intermediary stages. But this kind of assumptions are not really valid in a living system; all pathways work simultaneously and do not take place one after another; substrates enter the pathways and are withdrawn from it as and when necessary; ATP is utilised as and when needed; enzymatic rates are controlled by multiple means. Yet, it is useful to do this exercise to appreciate the beauty and efficiency of the living system in extraction and storing energy. Hence, there can be a net gain of 36 ATP molecules during aerobic respiration of one molecule of glucose.

Q5. Give an account of Glycolysis. Where does it occur? What are the end products? Trace the fate of these products in both aerobic and anaerobic respiration.
Ans: Glycolysis occurs in the cytoplasm of the cell and is present in all living organisms. In this process, glucose undergoes partial oxidation to form two molecules of pyruvic acid. In plants, this glucose is derived from sucrose, which is the end product of photosynthesis, or from storage carbohydrates. Sucrose is converted into glucose and fructose by the enzyme, invertase, and these two monosaccharides readily enter the glycolytic pathway. Glucose and fructose are phosphorylated to give rise to glucose-6-phosphate by the activity of the enzyme hexokinase. This phosphorylated form of glucose then isomerises to produce fructose-6-phosphate. Subsequent steps of metabolism of glucose and fructose are same. In glycolysis, a chain of ten reactions,
under the control of different enzymes, takes place to produce pyruvate from glucose. Pyruvic acid is then the key product of glycolysis. The metabolic fate of pyruvate depends on the cellular need. There are three major ways in which different cells handle pyruvic acid produced by glycolysis. These are lactic acid fermentation, alcoholic fermentation and aerobic respiration. Fermentation takes place under anaerobic conditions in many prokaryotes and unicellular eukaryotes. For the complete oxidation of glucose to C02 and H20, however, organisms adopt Krebs’ cycle which is also called as aerobic respiration. This requires 02 supply.