Sol: Boron has die electronic configuration:
ls22s22px12p0y2p °z
In the excited state, 2s-orbital electrons are impaired and one electron is shifted to a p-orbital. Now, hybridisation occurs between one s-and three p-orbitals to give sp3 hybridisation and tetrahedral geometry.

Q5. The exhibition of highest co-ordination dumber depends on the availability of vacant orbitals in the central atom. Which of the following elements is not likely to act as central atom in MF63- ?
(a) B
(b) AI
(c) Ga
(d) In
Sol: (a) The element M in the complex ion MF63-  has a coordination number of six. Since B has only s- and p-orbitals and no d – orbitals, therefore, at the maximum it can show a coordination number of 4. Thus, B cannot form complex of the type MF63-, i.e., option (a) is correct.

Q6. Boric acid is an acid because its molecule
(a) contains replaceable H+   ion
(b) gives up a proton.
(c)accepts OH–from water releasing proton.
(d) combines with proton from water molecule.
Sol: (c) Because of the small size of boron atom and presence of only six electrons in its valence shell, B(OH)3 accepts a pair of
electrons from OH– ion of H20, releasing a proton.

Sol: (d) On moving down the group from B to Tl, a regular decreasing trend in the ionisation energy values is not observed.

In Ga, there are ten d-electrons in the penultimate shell which screen the nuclear charge less effectively and thus, outer electron is held firmly. As a result, the ionisation energy of both A1 and Ga is nearly the same. The increase in ionisation energy from In to Tl is due to poor screening effect of 14f electrons present in the inner shell. 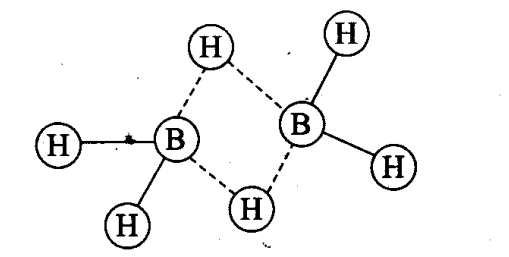 Q12. Quartz is extensively used as a piezoelectric material, it contains
(a) Pb
(b) Si
(c) Ti
(d) Sn
Sol: (b) Quartz is a crystalline form of silica.

Q13. The most commonly used reducing agent is

Q16. The reason for small radius of Ga compared to Al is_________ .
(a) poor screening effect of d and f orbitals
(b) increase in nuclear charge
(c) presence of higher orbitals
(d) higher atomic number
Sol: (a, b) The additional 10 d-electrons offer poor screening effect for the outer electrons from the increased fluclear charge in Gallium. Hence, atomic radius of Gallium is less than that of aluminium.

Q18. Me3SiCl is used during polymerisation of organo silicones because
(a) the chain length of organo silicone polymers can be controlled by adding Me3
(b) Me3SiCl blocks the end terminal of silicone polymer.
(c) Me3SiCl improves the quality and yield of the polymer. –
(d) Me3SiCl acts as a catalyst during polymerization.
Sol: (a, b) The chain length of the polymer can be controlled by adding Me3SiCl which blocks the ends of the silicon polymer.
Q19. Which of the following statements are correct?
(a) Fullerenes have dangling bonds.
(b) Fullerenes are cage-like molecules.
(c) Graphite is thermodynamically most stable allotrope of carbon.
(d) Graphite is slippery and hard and therefore used as a dry lubricant in
Sol: (b, c) Fullerenes are cage-like (soccer or rugby ball) molecules and graphite is thermodynamically most stable allotrope of carbon. Thus, options (b) and (c) are correct

Q20. Which of the following statements are correct? Answer on the basis of figure. 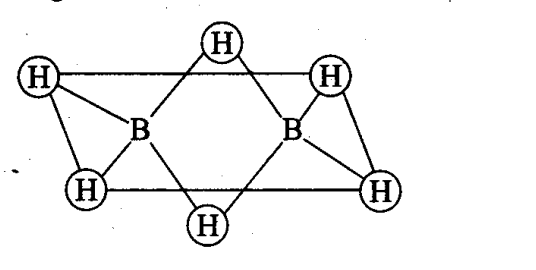 (a) The two bridged hydrogen atoms and the two boron atoms lie in one plane.
(b) Out of six B – H, bonds two bonds can be described in terms of 3 centre 2-electron bonds.
(c) Out of six B – H bonds four B – H bonds can be described in terms of 3 centre 2 electron bonds.
(d) The four terminal B – H bonds are two centre-two electron regular bonds.
Sol: (a, b, d) Each of the two boron atoms is in sp3-hybrid state. Of the four hybrid orbitals, three have one electron each while the fourth is empty. Two of the four orbitals of each, of the boron atom overlap with two terminal hydrogen atoms forming two normal B – H Ïƒ-bonds. One of the remaining hybrid orbitals (either empty or singly occupied) of one of the boron atoms, 15-orbital of H (bridge atom) and one of hybrid orbitals of the other boron atom overlap to form a delocalized orbital covering the three nuclei with a pair of electrons. This is three centre two electron bond. Similar overlapping occurs with the second hydrogen atom (bridging) forming three centre two electrons bond.

Q21. Identify the correct resonance structures of carbon dioxide from the ones given below:

Q22. Draw the structure of BC13.NH3 and AlCl3 (dimer).
Sol:  In BCl3, the central B atom has six electrons in the valence shell. It is, therefore, an electron deficient molecule and needs two more electrons to ‘ complete its octet. In other words, BCl3 acts as a Lewis acid. NH3, on the other hand, has a lone pair of electrons which it can donate easily. Therefore, NH3 acts as a Lewis base. The Lewis acid (BC13) and the Lewis base (NH3) combine together to form an adduct as shown below:

Q24. Draw the structure of boric acid showing hydrogen bonding. Which species is present in water? What is the hybridisation of boron in this species? 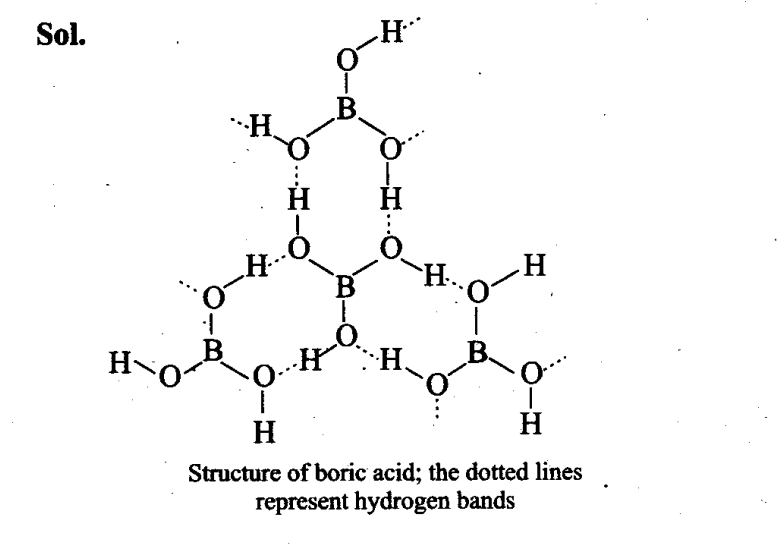 Q25. Explain why the following compounds behave as Lewis acids?
(i) BC13
(ii) AICI3
Sol:(i) BCl3: Boron has 6 electrons in its outermost orbital and has a vacant p orbital. Thus, it is an electron deficient compound. Hence, it acts as Lewis acid and accepts a lone pair of electrons.

(ii) AlCl3 is also an electron deficient compound and acts as Lewis acid. It generally forms a dimer to achieve stability.

(b)  The bond dissociation energy decreases rapidly as the atomic size increases. Since the atomic size of carbon is much smaller (77 pm) as compared to that of silicon (118 pm), therefore, carbon-carbon bond dissociation energy is much higher (348 kJ mol-1) than that of silicon-silicon bond (297 kJ mol-1). Hence, because C – C bonds are much stronger as compared to Si-Si bonds, carbon has a much higher tendency for catenation than silicon.

Q29. Carbon and silicon both belong to the group 14, but in spite of the stoichiometric similarity, the dioxides (i.e., carbon dioxide and silicon dioxide) differ in their structures. Comment.
Sol: Carbon, the first member of group 14 possesses a pronounced ability to form stable p-p multiple bonds with itself and with other first row elements such as nitrogen and oxygen. In C02, both the oxygen atoms are linked with carbon atom by double bonds.

Q32.  Aluminium dissolves in mineral acids and aqueous alkalies and thus shows amphoteric character, A piece of aluminium foil is treated with dilute hydrochloric acid or dilute sodium hydroxide solution in a test tube and on bringing a burning matchstick near the mouth of the test tube, a pop sound indicates the evolution of hydrogen gas. The same activity when performed with concentrated nitric acid, reaction doesn’t proceed. Explain the reason.
Sol:  Al being amphoteric dissolves both in acids and alkalies evolving H2 gas which bums with a pop sound.

(ii) Boron has three electrons in the valence shell. Because of its small size and high sum of the first three ionisation enthalpies (i.e., âˆ†iH1 + âˆ†iH2 + âˆ†iH3), boron does not lose all its valence electrons to form B3+ ions.

(v) Inert pair effect is less prominent in Sn than in Pb. Therefore, +2 oxidation of Sn is less stable than its +4 oxidation state. In other words, Sn2+ can easily lose two electrons to form Sn4+ and hence Sn2+ acts as a reducing agent.
Sn2+â†’Sn4+ + 2e

In contrast, the inert pair effect is’ more prominent in Pb than in Sn. Therefore, +2 oxidation state of Pb is more stable than its +4 oxidation state. In other words, Pb4+ can easily lose two electrons to form Pb2+ and hence Pb4+ acts as an oxidising agent.

(vi) Due to small size, the electron-electron repulsions in the relatively compact 2p-subshell of F are quite strong and hence the incoming electron is not accepted with the same ease as in case of bigger Cl atom where repulsions are comparatively weak. Thus, electron gain enthalpy of chlorine is more negative as compared to that of fluorine.

(viii) Property of catenation depends upon the strength of element-element bond which, in turn, depends upon the size of the element. Since the atomic size of carbon is much smaller than that of lead, therefore, carbon-carbon bond strength is much higher than that of lead-lead bond. Due to stronger C-C than Pb-Pb bonds, carbon has a much higher tendency for catenation than lead.

(ix) Unlike other boron halides, BF3 does not hydrolyse completely. Instead, it hydrolyses incompletely to form boric acid and fluoroboric acid. This is because the HF first formed reacts with H3B03.

(x) In graphite, carbon is sp2-hybridised and each carbon is linked to three other carbon atoms by forming hexagonal rings. Each carbon is now left with one unhybridised p-orbital which undergoes sideways overlap to form three p-p double bonds. Thus, graphite has two-dimensional sheet like (layered) structure consisting of a number of benzene rings fused together. Silicon, on the other hand, does not form an analogue of carbon because of the following reason:
Due to bigger size and smaller electronegativity of Si than C, it does not undergo sp2-hybridisation and hence it does not form p-p double bonds needed for graphite like structure. Instead, it prefers to undergo only sp3-hybridisation and hence silicon has diamond like three ­dimensional network

Q34. Identify the compound A, X and Z in the following reactions:

Matching Column Type Questions
In the following questions more than one correlation is possible between options of column I and II. Make as many correlations as you can.
Q36. Match the species given in Column I with the properties mentioned in Column II.

Assertion and Reason Type Questions ‘
In the following questions a statement of Assertion (A) followed by a statement of Reason (R) is given. Choose the correct option out of the choices given below each question. •
Q39. Assertion (A): If aluminium atoms replace a few silicon atoms in three dimensional network of silicon dioxide, the overall structure acquires a negative charge.
Reason (R): Aluminium is trivalent while silicon is tetravalent.
(a) Both A and R are true and R is the correct explanation of A.
(b) Both A and R are true but R is not the correct explanation of A.
(c) Both A and R are not correct.
(d) A is not correct but R is correct.
Sol: (a) In aluminosilicates (anion), some of the silicon atoms are replaced by aluminium. Since, aluminium is trivalent while silicon is tetravalent, hence we get negatively charged ion.