Q4. The correct IUPAC name of the following alkane is

Since I contains a chiral carbon, it exists in two enantiomers (A and B) which are mirror image of each other.

Q6. Which of the following will nofshow geometrical isomerism?

Sol: (b) The order of decreasing stability of carbanions is:

Q9. Arrange the following alkyl halides in decreasing order of the rate of Î² -elimination reaction with alcoholic KOH.

is the order of rate of Î² -elimination with alcoholic KOH.

More the number of Î²-substituents (alkyl groups), more stable alkene will be formed on Î² -elimination and more will be the reactivity. Thus, the decreasing order of the rate of Î² -elimination reaction with alcoholic KOH is: A > C > B.

Q10. Which of the following reactions of methane is incomplete combustion?

Sol: (c) Dining incomplete combustion of alkanes with insufficient amount of air or dioxygen, carbon black is formed which is used in the manufacture of ink, printer ink, black pigments and as filters. Thus,

Q12. Which of the following alkenes on ozonolysis gives a mixture of ketones only? 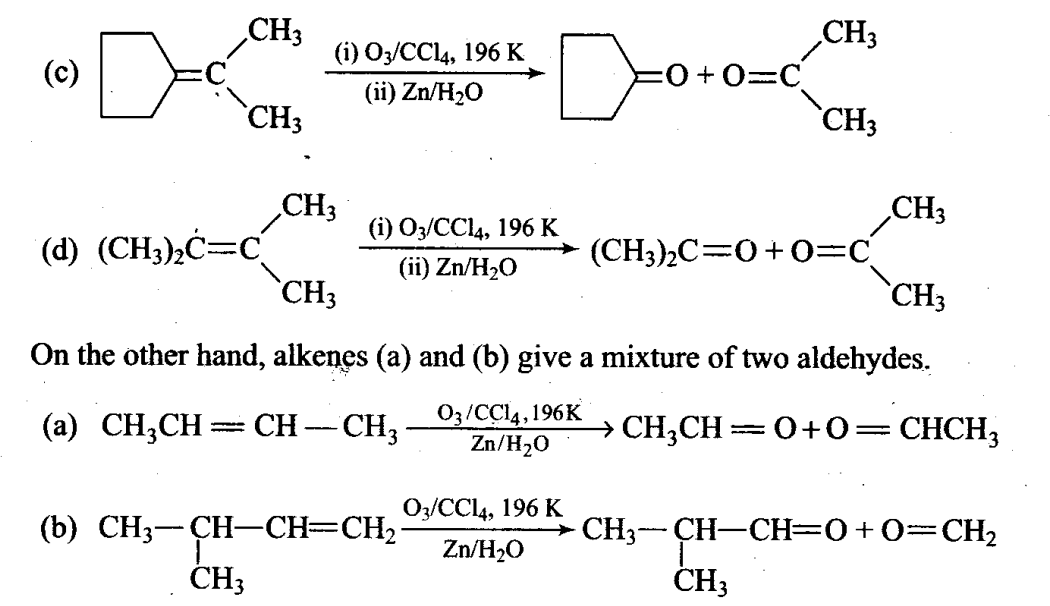 Q13. Which are the correct IUPAC names of the following compound?

Q14. Which are the correct IUPAC names of the following compound 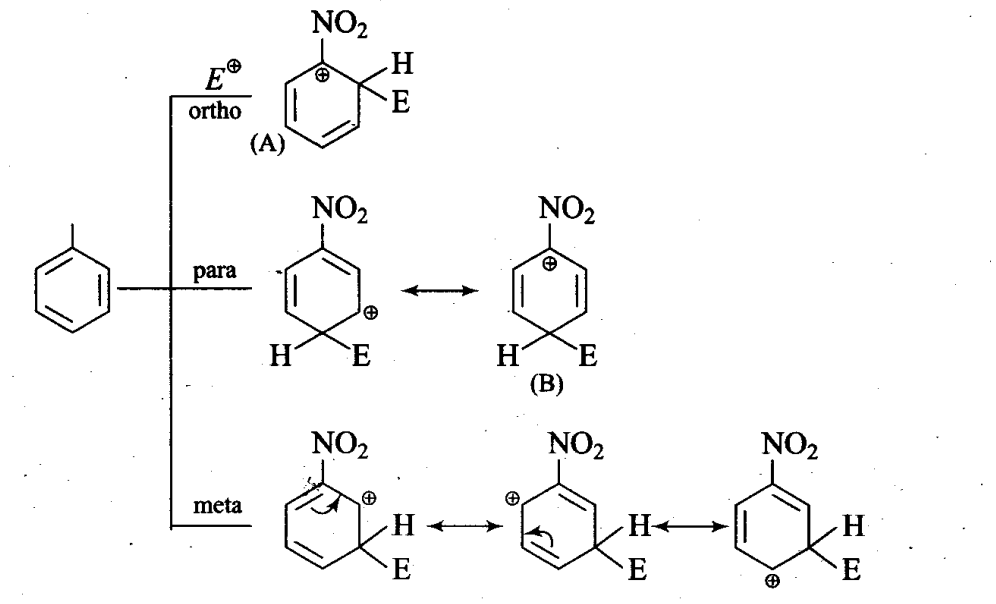 In ortho, para-attack of electrophile on nitrobenzene, we are getting two structures (A) and (B) in which positive charge is appearing on the carbon atom directly attached to the nitro group.
As nitro group is electron withdrawing by nature, it decreases the stability of such product and hence meta attack is more feasible when electron withdrawing substituents are attached.

Q18. Four structures are given in options (a) to (d). Examine them and select the aromatic structures.

Q21. Alkynes on reduction with sodium in liquid ammonia form trans alkenes. Will butene formed on the reduction of but-2-yne show geometrical isomerism?

Q22. Rotation around carbon-carbon single bond of ethane is not completely free. Justify the statement.
Sol: Ethane contains carbon-carbon sigma (Ïƒ) bond. Electron distribution of the sigma molecular orbital is symmetrical around the intemuclear axis of the C – C bond which is not disturbed due to rotation about its axis. This permits free rotation around aC-C single bond. However, rotation around a C – C single bond is not completely free. It is hindered by a small energy barrier due to weak repulsive interaction between the adjacent bonds. Such a type of repulsive interaction is called torsional strain. Of all the conformations of ethane, the staggered form has the least torsional strain and the eclipsed form has the maximum torsional strain. The energy difference between the two extreme forms is of the order of 12.5 kJ mol-1, which is very small. It has not been possible to separate and isolate different conformational isomers of ethane.

Q23. Draw Newman and Sawhorse projections for the eclipsed and staggered conformations of ethane. Which of these conformations is more stable and why? . 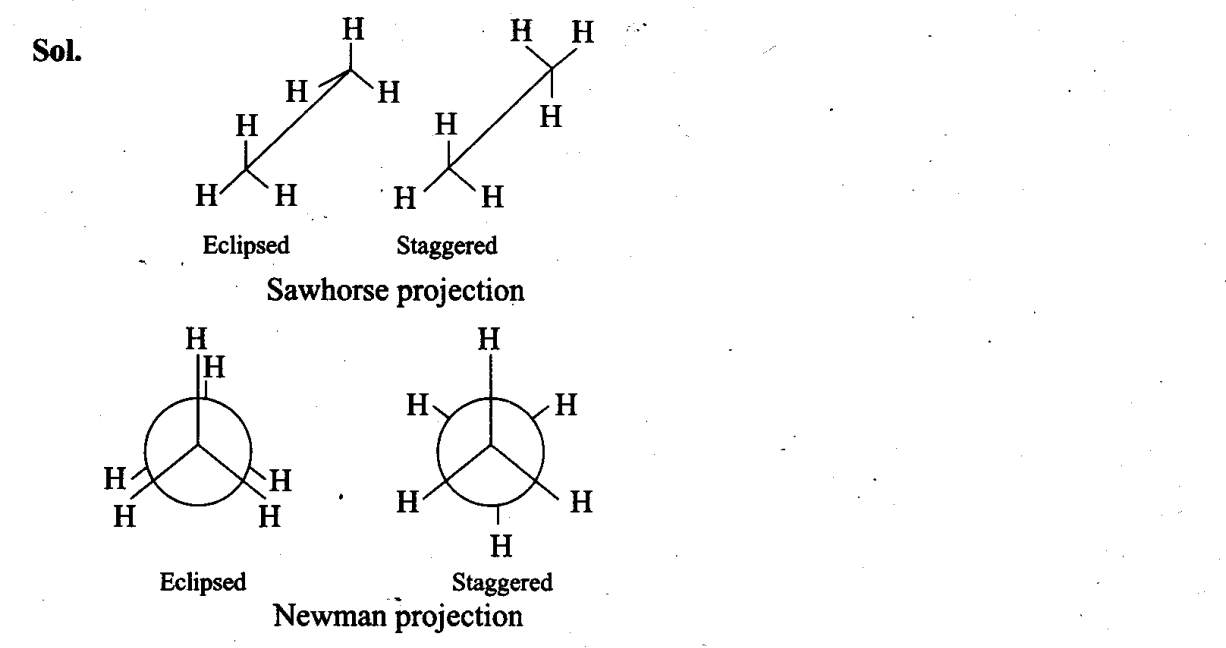 In staggered form of ethane, the electron clouds of carbon-hydrogen bonds are as far apart as possible. Thus, there are minimum repulsive forces, minimum energy and maximum stability of the molecule. On the other hand, when the staggered form changes into the eclipsed form, the electron clouds of the carbon-hydrogen bonds come closer to each other resulting in increase in electron cloud repulsions. To check the increased repulsive forces, molecule will have to possess more energy and thus has lesser stability.

Q24. The intermediate carbocation formed in the reactions of HI, HBr and HC1 with propene is the same and the bond energy of HCl, HBr and HI is 430.5 kJ mol-1,363.7 kJ mol–1 and 296.8 kJ mol-1 What will be the other of reactivity of these halogen acids?
Sol: The bond dissociation enthalpy decreases in the order HC1 > HBr > HI, therefore, the order of reactivity is in the reverse order i.e., HI > HBr > HCl.
Q25. What will be the product obtained as a result of the following reaction and why?

Propyl chloride forms CH3 – CH2 â€“ CH+2 with anhydrous A1C13 which is less stable. This rearranges to a more stable carbocation as:

Q27. Arrange the following set of compounds in the order of their decreasing . relative reactivity with an electrophile. Give reason.

Sol: The methoxy group (-OCH3) is electron releasing group. It increases the electron density in beniene nucleus due to

In case of alkyl halides, the electron density increases at ortho and para positions due to +R effect. However, the halogen atom also withdraws electrons from the ring because of its -I effect. Since the -I effect is stronger than the +R effect, the halogens are moderately deactivating. Thus, overall electron density on benzene ring decreases, which makes further substitution difficult.
-N02 group is electron withdrawing group. It decreases the electron density in benzene nucleus due to its strong -R-effect and strong -I-effect. Hence, it makes nitrobenzene less reactive. Therefore, overall reactivity of these three compounds towards electrophiles decreases in the following order:

Q28. Despite their -I effect, halogens are o- andp-direction in haloarenes. Explain.
Sol: In case of aryl halides, halogens are little deactivating because of their strong -I effect. Therefore, overall electron density on the benzene ring decreases. In other words, halogens are deactivating due to -I effect. However, because of the +R-effect, i.e., participation of lone pairs of electrons on the halogen atom with the Ï€-electrons of the benzene ring, the electron density increases more at o- and p-positions than at m-positions.

Q29. Why does the presence of a nitro group-make the benzene ring less reactive in comparison to the unsubstituted benzene ring? Explain.
Sol:  Nitro group is an electron withdrawing group (-R and -I effects). It deactivates the ring by decreasing nucleophilicity for further substitution. 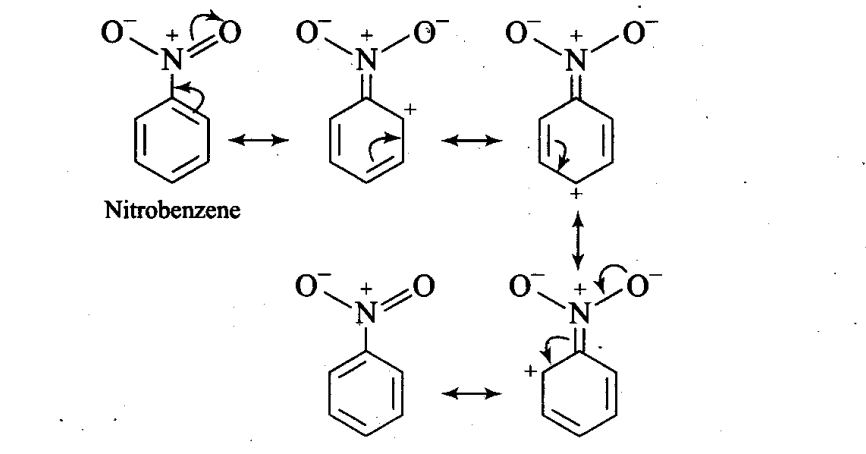 Q30. Suggest a route for the preparation of nitrobenzene starting from acetylene.
Sol: Acetylene when passed through red hot iron tube at 500 °C undergoes cyclic polymerisation to give benzene which upon nitration gives nitrobenzene.

Q31. Predict the major product(s) of the following reactions and explain their formation.

Sol:  Addition of HBr to unsymmetrical alkenes follows Markonikov rule. It states that negative part of the addendum (adding molecule) gets attached to that carbon atom which possesses lesser number of hydrogen atoms.
Mechanism: Hydrogen bromide provides an electrophile, H+, which attacks the double bond to form carbocation as shown below:

Addition reaction of HBr to unsymmetrical alkenes in the presence of peroxide follows anti-Markovnikov rule.
Mechanism: Peroxide effect proceeds via free radical chain mechanism as given below: 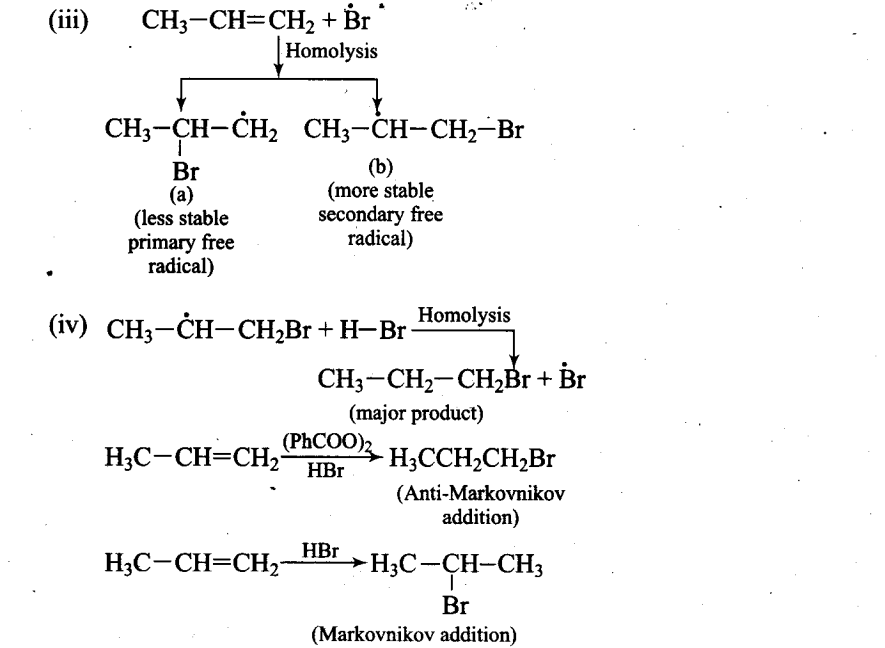 Q33. The relative reactivity of 1 °, 2 ° and 3 ° hydrogens towards chlorination is 1: 3.8 : 5. Calculate the percentages of all monochlorinated products obtained from 2-methylbutane.

Q34. Write the structures and names of products obtained in the reactions of sodium with a mixture of l-iodo-2-methylpropane and 2-iodopropane.