Q1. Which of the following conclusions could not be derived from Rutherford’s Î±-particle scattering experiment?
(a) Most of the space in the atom is empty.
(b) The radius of the atom is about 10 -10 m while that of nucleus is 10 -15
(c) Electrons move in a circular path of fixed energy called orbits.
(d) Electrons and the nucleus are held together by electrostatic forces of attraction.

Sol: (c) The concept of circular paths of fixed energy was proposed by Bohr and not derived from Rutherford’s scattering experiment.

Q2. Which of the following options does not represent ground state electronic configuration of an atom?

Q3. The probability density plots of Is and 2s orbitals are given in the following figures. 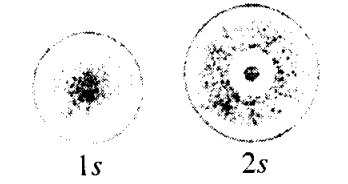 Q6. Which of the following properties of atom could be explained correctly by Thomson Model of atom?
(a) Overall neutrality of atom.
(b) Spectra of hydrogen atom.
(c) Position of electrons, protons and neutrons in atom.
(d) Stability of atom.
Sol: (a) According to Thomson model of atom, the mass of the atom is assumed to be uniformly distributed over the atom. This model was able to explain the overall neutrality of the atom.

Q10. Which of the following is responsible to rule out the existence of definite paths or trajectories of electrons?
(a) Pauli’s exclusion principle
(b) Heisenberg’s uncertainty principle
(c) Hund’s rule of maximum multiplicity
(d) Aufbau principle
Sol: (b) According to Heisenberg’s uncertainty principle, the position and velocity of an electron cannot be determined simultaneously with accuracy which rules out the existence of fixed paths.

Q14. The pair of ions having same electronic configuration is _______

Q15. For the electrons of oxygen atom, which of the following statements is correct?

Q16. If traveling at same speeds, which of the following matter waves have the shortest wavelength?
(a) Electron
(b) Alpha particle (He2- )
(c) Neutron
(d) Proton

Q17. Identify the pairs which are not of isotopes?

Sol: (a, d) Degenerate orbitals mean the orbitals of the same sub-shell of the same main shell, i.e., their n and l values are the same. Other two pairs have different values of n and l hence, cannot be having the same energy.

Q19. Which of the following sets of quantum numbers are correct? 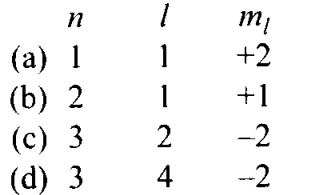 Q20. In which of the following pairs, the ions are isoelectronic? 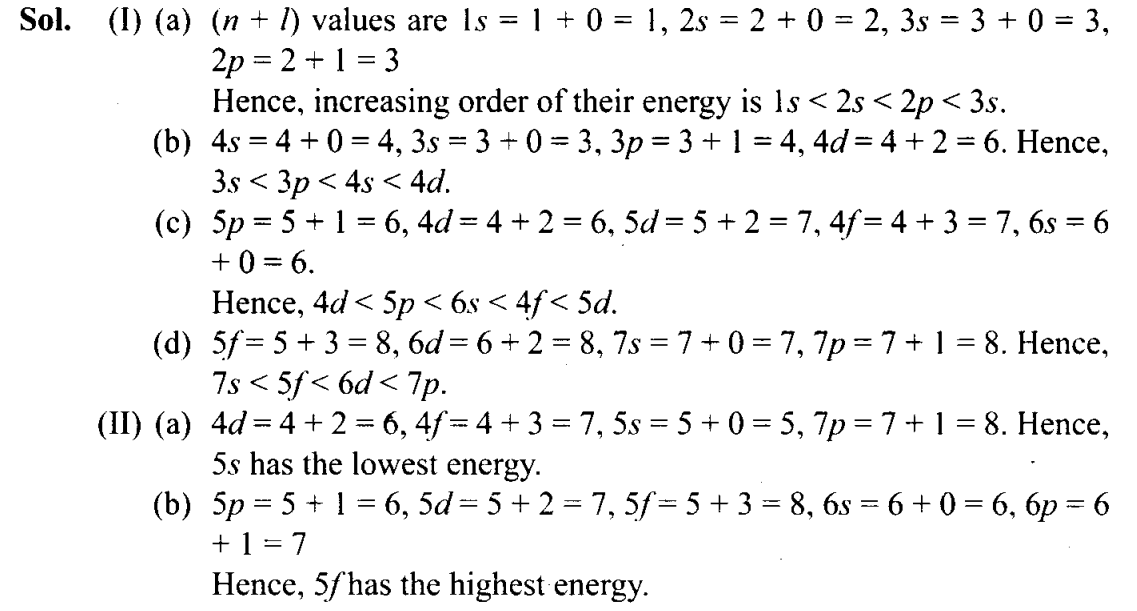 Q28. Which of the following will not show deflection from the path on passing through an electric field?
Proton, cathode rays, electron, neutron.
Sol: Neutron, since it is neutral and cannot be deflected by an electric field.

Q30. Wavelengths of different radiations are given below:

Q33. According to de Broglie, matter should exhibit dual behaviour, that is both particle and wave like properties. However, a cricket ball of mass 100 g does not move like a wave when it is thrown by a bowler at a speed of 100 km/h. Calculate the wavelength of the ball and explain why it does not show wave nature.

Since the wavelength is very small, the wave nature cannot be detected.