Q2. Which of the following properties of water can be used to explain the spherical shape of rain droplets?
(a)Viscosity
(b)Surface tension
(c)Critical phenomena
(d)Pressure
Sol: (b) Due to surface tension, the surface of the water drops is under tension and tends to take spherical shape to reduce the tension.
Q3. A plot of volume (V) versus temperature (T) for a gas at constant pressure is a straight line passing through the origin.
The plots at different values of pressure are shown in the figure. Which , of the following order of pressure is correct for this gas? 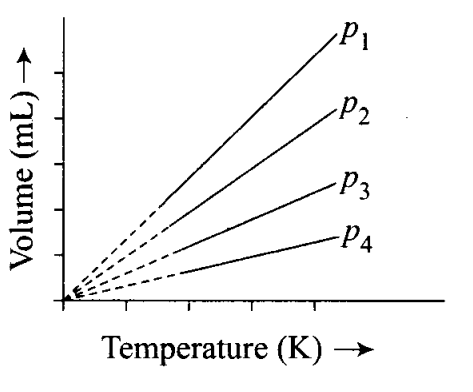 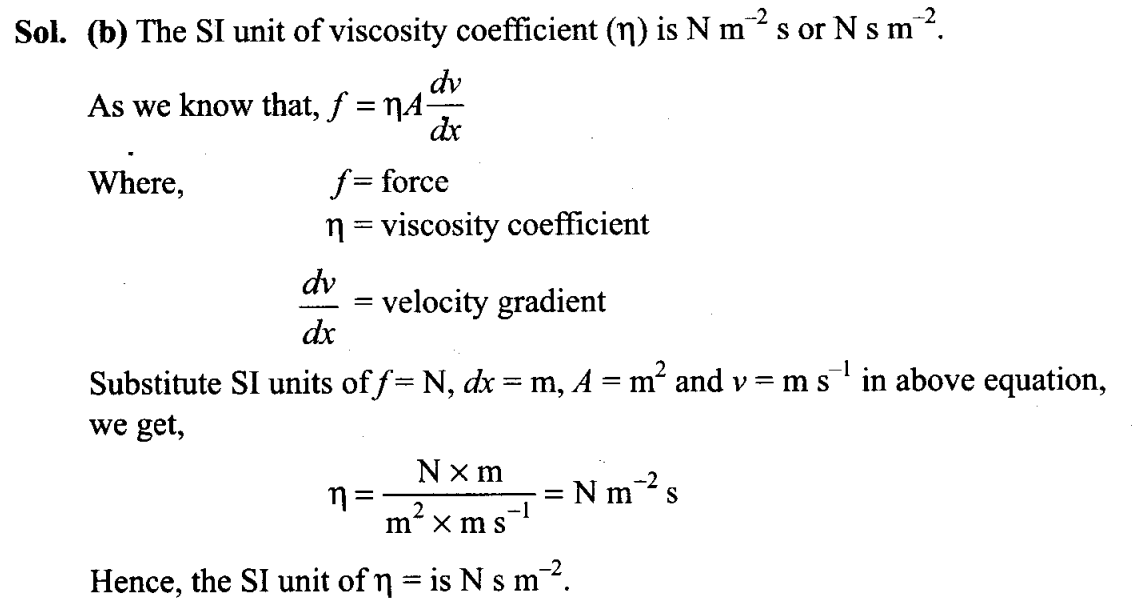 Q10. Atmospheric pressures recorded in different cities are as follows:

Q11. Which curve in figure represents the curve of ideal gas? 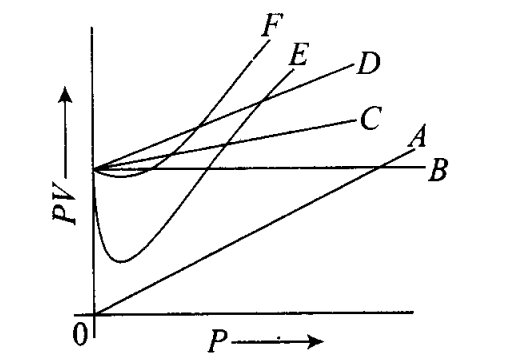 Sol: (a) For curve B, value of PV is constant and for an ideal gas plot of PV vs P is a straight line.

Q12. Increase in kinetic energy can overcome intermolecular forces of attraction. How will the viscosity of liquid be affected by the increase in temperature?
(a)Increase
(b)No effect
(c) Decrease
(d) No regular pattern will be followed
Sol: (c) Intermolecular force of liquid decreases with increase in temperature, hence viscosity of liquid also decreases. However, some exceptions are there like liquid proteins and liquid sulphur.

Q16. Under which of the following two conditions applied together, a gas deviates most from the ideal behaviour?
(a) Low pressure (b) High pressure
(c) Low temperature (d) High temperature
Sol: (b, c) A gas which obeys the ideal gas equation, p V = nRTunder all conditions of temperature and pressure is called an â€˜ideal gas’.
However, there is no gas which obeys the ideal gas equation under all conditions of temperature and pressure. Hence, the concept of ideal gas is only theoretical or hypothetical. The gases are found to obey the gas laws fairly well when the pressure is low or the temperature is high.
Such gases are, therefore, known as â€˜real gases’. All gases are real gases. Hence, at high pressure and low temperature, a real gas deviates most from ideal behaviour.

Q18. If 1 gram of each of the following gases are taken at STP, which of the gases will occupy (a) greatest volume and (b) smallest volume? CO, H20, CH4, NO 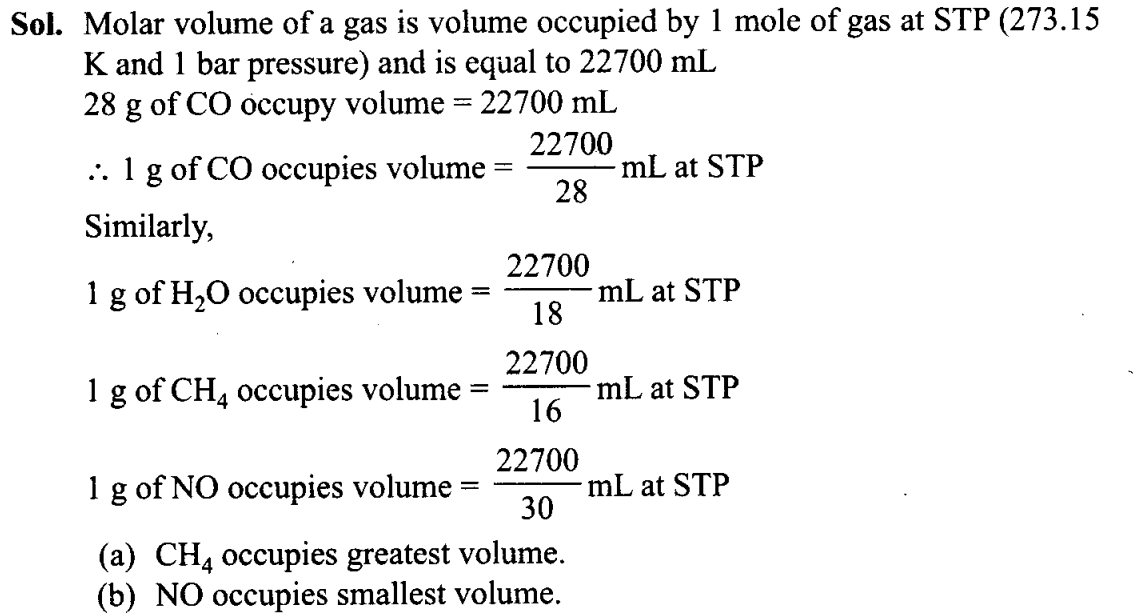 Q21. Use the information and data given below to answer the questions (a) to (c):
• Stronger intermolecular forces result in higher boiling point.
• Strength of London forces increases with the number of electrons in the molecule.
• Boiling point of HF, HC1, HBr and HI are 293 K, 189 K, 206 K and 238 K respectively.
(a) Which type of intermolecular forces are present in the molecules HF, HC1, HBr and HI?
(b) Looking at the trend of boiling points of HC1, HBr and HI, explain out of dipole-dipole interaction and London interaction, which one is predominant here?
(c) Why is boiling point of hydrogen fluoride highest while that of hydrogen chloride lowest?
Sol: (a) All the given molecules viz. HF, HC1, HBr and HI have permanent di-poles. Hence, all of them possess dipole-dipole and London forces. HF in addition to dipole-dipole and London forces also has hydrogen bonding.
(b) Electronegativity of Cl, Br and I is in the order: Cl > Br > I. Therefore, polar character and hence dipole-dipole interactions should be in the order HCl > HBr > HI. But boiling points are found to be in the order HCl < HBr < HI. This shows that London forces are predominant. This is because London forces increase as the number of electrons in the molecule increases. In this case, the number of electrons increases from HC1 to HI.
(c) Due to very high electronegativity of F, HF is most polar and also there is hydrogen bonding present in it. Hence, it has the highest boiling point.

Q23. A gas that follows Boyle’s law, Charles’ law and Avogadro’s law is called an ideal gas. Under what conditions a real gas would behave ideally?
Sol:  At high temperature and low pressure, the gases behave ideally since the two postulates of kinetic theory of gases are true under these conditions.
(i) The volume of a molecule of a gas is negligible as compared to its complete volume.
(ii) There is negligible force of attraction between the molecules of a gas.

Q25. Value of universal gas constant (R) is same for all gases. What is its physical significance?

Sol: In the above given molecules, only hexane [CH3(CH2)4CH3] is a non-polar molecule in which only London dispersion forces exist. These forces are very weak while both water and ethanol are polar molecules in which dipole- dipole interactions as well as H-bonding exists.
However, since H-bonding interactions are much stronger in water than ethanol, therefore, it possesses stronger intermolecular forces than alcohol and hexane. Hence, the increasing order of surface tension is
Hexane < Alcohol < Water

Thus P drygas  is given as

Q34. For real gases the relation between P, V and T is given by van der Waals equation:

where â€˜a’ and â€˜b’ are van der Waals constants, â€˜nb’ is approximately equal to the total volume of the molecules of a gas.
â€˜a’ is the measure of magnitude of intermolecular attraction.
(i) Arrange the following gases in the increasing order of â€˜b’. Give reason. 02, C02, H2, He
(ii) Arrange the following gases in the decreasing order of magnitude of â€˜a’. Give reason.CH4, O2, H2
Sol: (i) As â€˜b’ represents molar volume occupied by the gas molecules, greater the size of the molecules, greater is the volume occupied by 1 mole of molecules. The size and hence the value of â€˜b’ increase in the order: H2 < He < 02 < C02.
As all the given molecules are non-polar, the magnitude of intermolecular attractions and hence the value of â€˜a’ increases with the increase in number of electrons in the molecule, i.e., in the order: CH4 > 02 > H2. (Greater the number of electrons, greater is the size of electron cloud, greater is the polarization of the molecule, greater is the attraction).

Q35. The relation between pressure exerted by an ideal gas (Pideal) and observed pressure (Preal) is given by the equation

Q36. Name two phenomena that can be explained on the basis of surface tension.
Sol:(i) Spherical shape of liquid drops.
(ii) Cleansing action of soaps and detergents. ‘
(iii) Capillary action â€” » Rise and dip of liquid in the column of capillary.

Sol: The increasing order of viscosity is Hexane < Water < Glycerine
In hexane, there are only London forces, whereas in water and glycerine there is hydrogen bonding which is stronger in case of glycerine (because of the presence of three -OH groups) than that in water.

Q39. The variation of pressure with volume of the gas at different temperatures can be graphically represented as shown in figure. 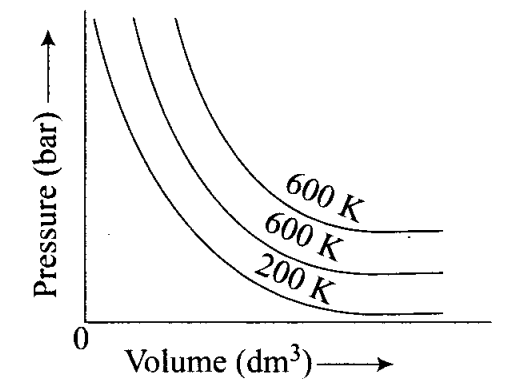 Q40. Pressure versus volume graphs for a real gas and an ideal gas are shown in the figure.

Matching Column Type Questions
Q41. Match the graph between the following variables with their names.

Q42. Match the following gas laws with the equation representing them.

Assertion and Reason Type Questions
In the following questions a statement of Assertion (A) followed by a statement of Reason (R) is given. Choose the correct option out of the choices given below each question.
Q44. Assertion (A): Three states of matter are the result of balance between intermolecular forces and thermal energy of the molecules. .
Reason (R): Intermolecular forces tend to keep the molecules together but thermal energy of molecules tends to keep them apart.
(a) Both A and R are true and R is the correct explanation of A.
(b) Both A and R are true but R is not the correct explanation of A.
(c) A is true but R is false.
(d) A is false but R is true.
Sol: (a) States of matter of a substance depend on the intermolecular forces.

Intermolecular forces keep the molecules together while thermal energy of molecules tends to keep them apart.

Q45. Assertion (A): At constant temperature, PV vs V  plot for real gases is not a straight line.
Reason (R): At high pressure all gases have Z> 1 but at intermediate pressure most gases have Z < 1.
(a) Both A and R are true and R is the correct explanation of A.
(b) Both A and R are true but R is not the correct explanation of A.
(c) A is true but R is false.
(d) A is false but R is true.
Sol: (b) PV versus Fplot is straight line for ideal gases but not for real gases.
At high pressure, there is positive deviation from ideal behaviour (Z < 1) but at intermediate or moderate pressure, the real gases pass negative deviation from ideal behavior (Z < 1).

Q48. Assertion (A): At critical temperature liquid passes into gaseous state imperceptibly and continuously.
Reason (R): The density of liqtiid and gaseous phase is equal to critical temperature.
(a) Both A and R are true and R is the correct explanation of A.
(b) Both A and R are true but R is not the correct explanation of A.
(c) A is true but R is false.
(d) A is false but R is true.
Sol:(a) At critical state, surface tension of liquid is zero hence liquid passes into gaseous state imperceptibility and continously . At this stage , the liquid and vapour phase becomes equal.

Q49. Assertion (A): Liquids tend to have maximum number of molecules at their surface.
Reason (R): Small liquid drops have spherical shape.
(a) Both A and R are true and R is the correct explanation of A.
(b) Both A and R are true but R is not the correct explanation of A.
(c) A is true but R is false.
(d) A is false but R is true.
Sol: (d) Liquid tends to acquire minimum surface area due to surface tension. Thus, small liquid drops are spherical. In spherical shape, surface area is minimum.
Long Answer Type Questions
Q50. Isotherms of carbon dioxide at various temperatures are represented in the following figure. Answer the following questions based on this figure. 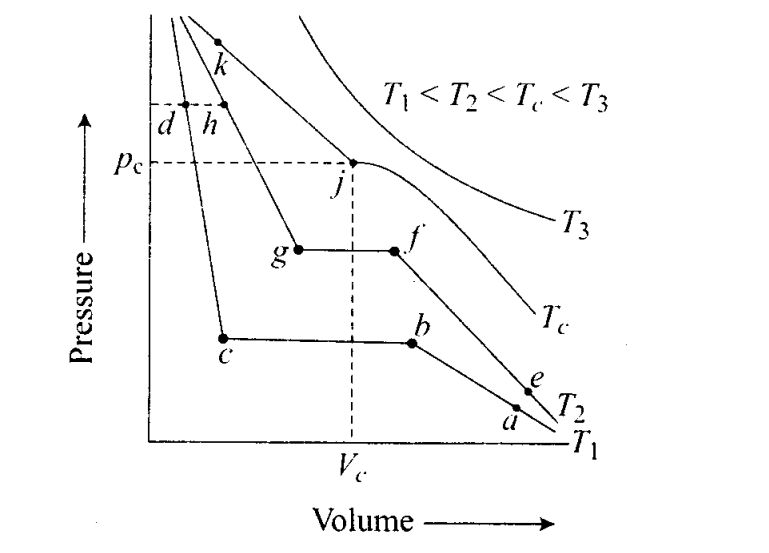 Q51. The variation of vapour pressure of different liquids with temperature is shown in figure 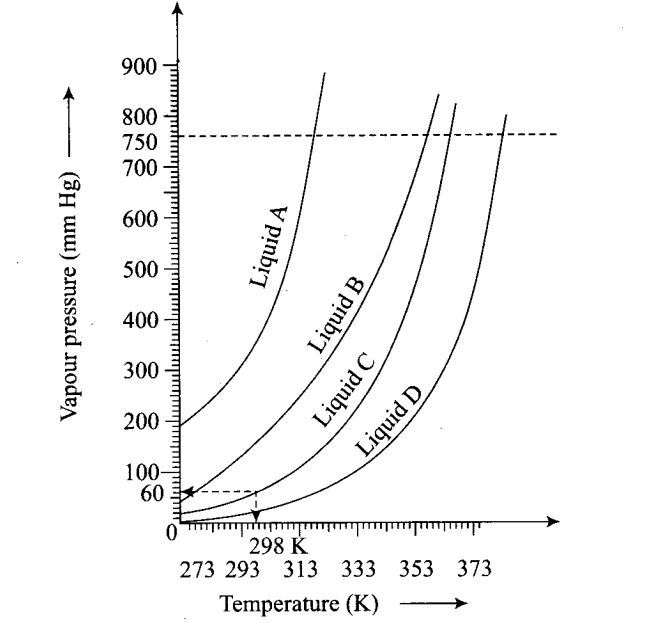 (i) Calculate graphically boiling points of liquids A and B.
(ii) If we take liquid C in a closed vessel and heat it continuously, at what temperature will it boil?
(iii) At high altitude, atmospheric pressure is low (say 60 mm Hg). At what temperature liquid D boils?
(iv) Pressure cooker is used for cooking food at hill station. Explain in terms of vapour pressure why is it so?

Q53. Why does sharp glass edge become smooth on heating it up to its melting point in a flame? Explain which property of liquids is responsible for this phenomenon.
Sol: On heating the glass, it melts and takes up rounded shape at the edges which has minimum surface area. This is due to the property of surface tension of liquids.

Q54. Explain the term â€˜laminar flow’. Is the velocity of molecules same in all the layers in laminar flow? Explain your answer.
Sol: When a liquid flows over a fixed surface, the layer of molecules in the immediate contact of surface is stationary. The velocity of the upper layers increases as the distance of layers from the fixed layer increases.
This type of flow in which there is a regular gradation of velocity on passing from one layer to the next is called laminar flow.

In laminar flow, the velocity of molecules is not same in all the layers because every layer offers some resistance or friction to the layer immediately below it.

Q55. Isotherms of carbon dioxide gas are shown in figure. Mark a path for changing . gas into liquid such that only one phase (i.e. either a gas or liquid) exists at any time during the change. Explain how the temperature, volume and pressure should be changed to carry out the change. 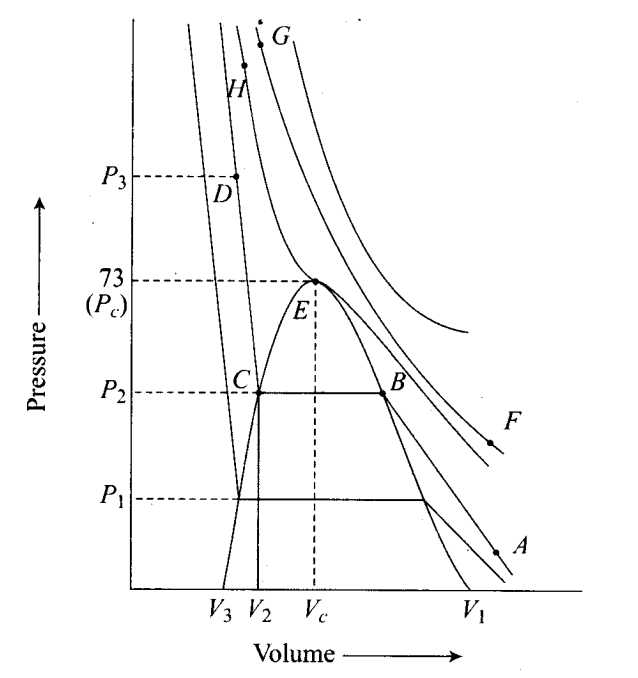 Sol: In isotherm of carbon dioxide, it is possible to change a gas into liquid or a liquid into gas by a process in which always a single phase is present. 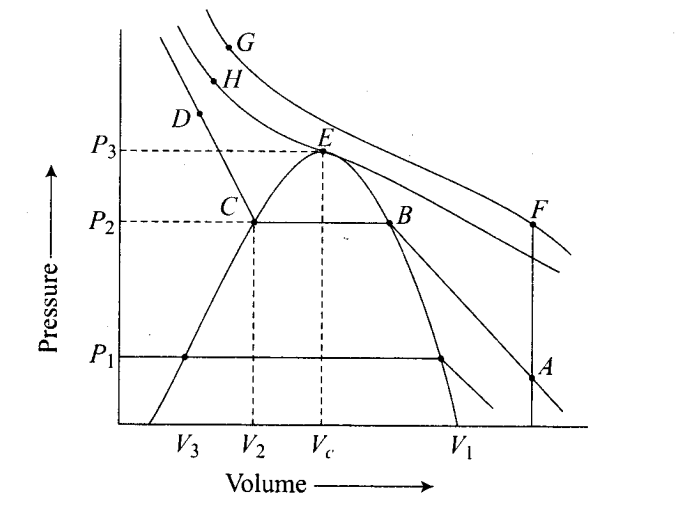