Q4. The volume of gas is reduced to half from its original volume. The specific
heat will .
(a) reduce to half (b) be doubled
(c) remain constant (d) increase four times
Sol: (c) The specific heat of a substance is the heat required to raise the temperature of 1 gram of a substance by one degree (1 K or 1 °C). It is an intensive property and is independent of the volume of the substance.

Q5. During complete combustion of one mole of butane, 2658 kJ of heat is released. The thermochemical reaction for above change is

Sol: (c) Exothermic reaction for combustion of one mole of butane is represented as:

Q7. In an adiabatic process, no transfer-of heat takes place between system and surroundings. Choose the correct option for free expansion of an ideal gas under adiabatic condition from the following.

Q8. The pressure-volume work for an ideal gas can be calculated by using the expression

The work can also be calculated from the pV

Q9. The entropy change can be calculated by using the expression âˆ†S = q rev / T.  When water freezes in a glass beaker, choose the correct statement amongst the following:

When water freezes in a glass beaker, choose the correct statement amongst the following:

Q10. On the basis of thermochemical equations (i), (ii) and (iii), find out which of the algebraic relationships given in options (a) to (d) is correct. 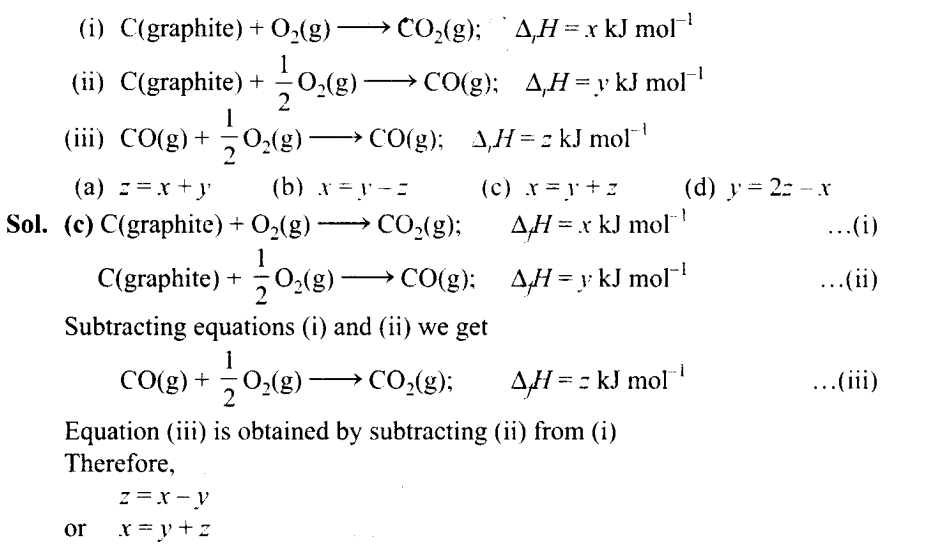 More than One Correct Answer Type
Q15. Thermodynamics mainly deals with
(a) interrelation of various forms of energy and their transformation front one from  to another.
(b) energy changes in the processes which depend only on initial and final states of the microscopic system containing a few molecules.
(c) how and at what rate these energy transformations are carried out.
(d) the system in equilibrium state or moving from one equilibrium state to another equilibrium state.
Sol: (a, d) Thermodynamics deals with interrelation of various forms of energy and their transformation into each other. It also deals with thermal or mechanical equilibrium. However, if does not tell anything about the rate of reaction.

Q17. The spontaneity means, having the potential to proceed without the assistance of external agency. The processes which occur spontaneously are
(a) flow of heat from colder to warmer body.
(b) gas in a container contracting into one comer.
(c) gas expanding to fill the available volume.
(d) burning carbon in oxygen to give carbon dioxide.
Sol:(c, d) Gas expands or diffuses in available space spontaneously, e.g., leakage of cooking gas gives smell of ethyl mercaptan spontaneously. Moreover, burning of carbon to C02 is also spontaneous.

Q27. Given that Î”H= 0 for mixing of two gases. Explain whether the diffusion of these gases into each other in a closed container is a spontaneous process or not?
Sol: It is a spontaneous process. Although enthalpy change is zero but randomness or disorder (Î”S) increases and Î”S is positive. Therefore, in equation, Î”G = Î”H – TÎ”S, the term TÎ”S will be negative. Hence Î”G will be negative.

Q31. A sample of 1.0 mol of a monoatomic ideal gas is taken through a cyclic process of expansion and compression as shown in the figure. What will be the value of Î”Hfor the cycle as a whole? 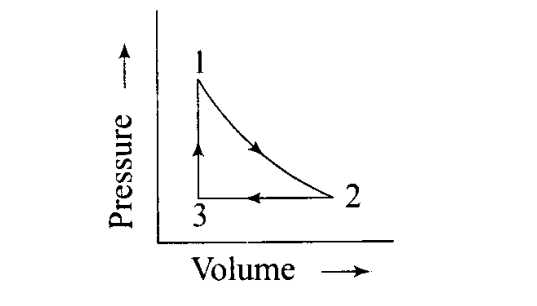 Q38. Expansion of a gas in vacuum is called free expansion. Calculate the work done and the change in internal energy when 1 litre of ideal gas expands isothermally into vacuum until its total volume is 5 litre.
Sol: During free expansion, external pressure is zero, so Work done, w = -pextÎ”V
= -0(5 – 1) = 0
Since the gas is expanding isothermally, therefore, q = 0
Î”U = q + w =0+0=0

Q42. The net enthalpy change of a reaction is the amount of energy required to break all the bonds in reactant molecules minus amount of energy required to form all the bonds in the product molecules. What will be the enthalpy change for the following reaction?
H2(g) + Br2(g)â†’2HBr(g)
Given that bond energy of H2, Br2 and HBr is 4.35 kJ mol-1,192 kJ mol-1 and 368 kJ mol -1 respectively.