Multiple Choice Questions
Single Correct Answer Type
Q1. A ball is travelling with uniform translatory motion. This means that
(a) it is at rest.
(b) the path can be a straight line or circular and the ball travels with uniform
(c) all parts of the ball have the same velocity (magnitude and direction) and the velocity is constant.
(d) the centre of the ball moves with constant velocity and the ball spins about its centre uniformly.
Sol: (c) When a body moves in such a way that the linear distance covered by each particle of the body is same during the motion, then the motion is said to be translatory or translation motion.
Translatory motion can be, again of two types viz., curvilinear (shown in fig. (a)) or rectilinear (shown in fig. (b)), accordingly as the paths of every constituent particles are similarly curved or straight line paths. Here it is important that the body does not change its orientation. Here we can also define it further in uniform and non-uniform translatory motion. Here figure
(b) is uniformly translatory motion. 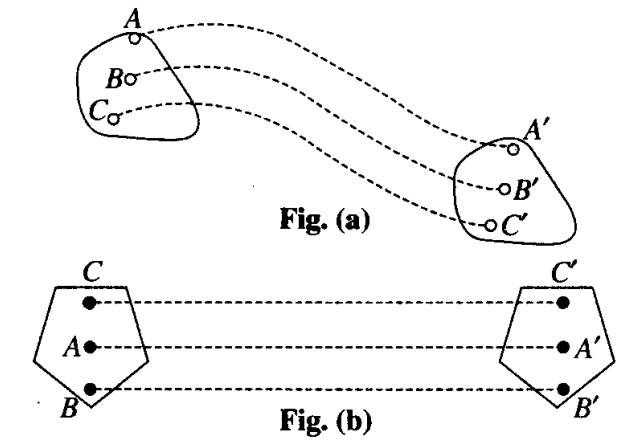 takes place always in the direction of the force applied.
We know that F = df/ dt
According to the question that the meter scale is moving with uniform velocity, hence, change in momentum will be zero, i.e. dp = 0
This implies momentum will remains same. So, Force = F= 0.
So, we can say that all parts of the meter scale is moving with uniform velocity because total force is zero and if there is any torque acting on the body this means that the body will be in rotational motion which means that the direction of velocity will be changing continuously. So, the torque acting about centre of mass of the scale is also zero. 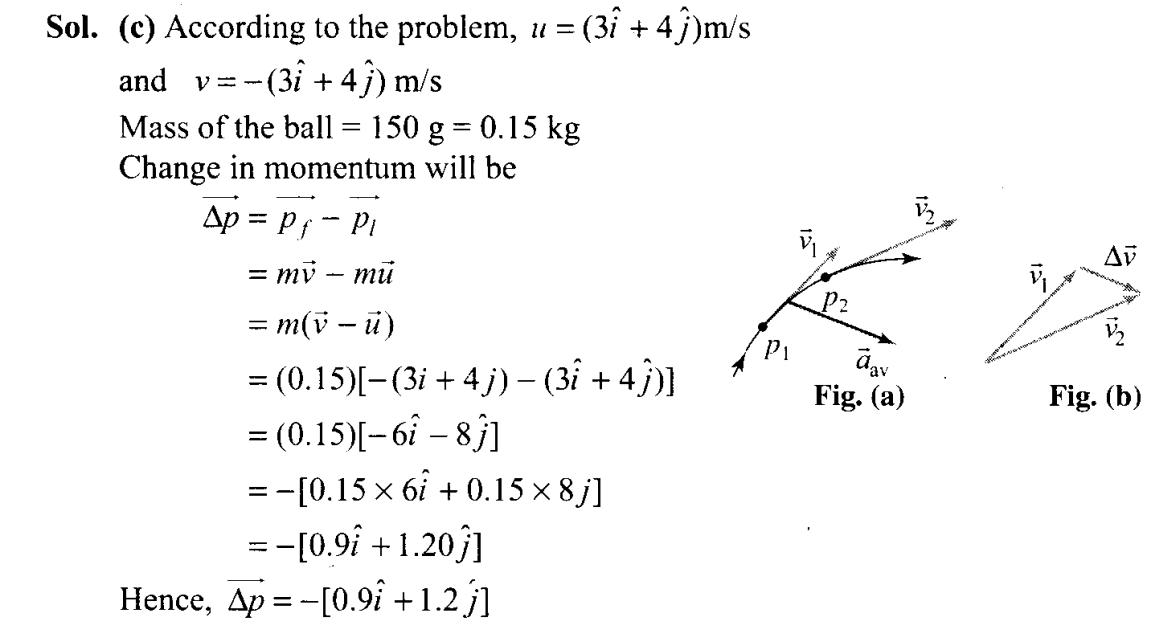 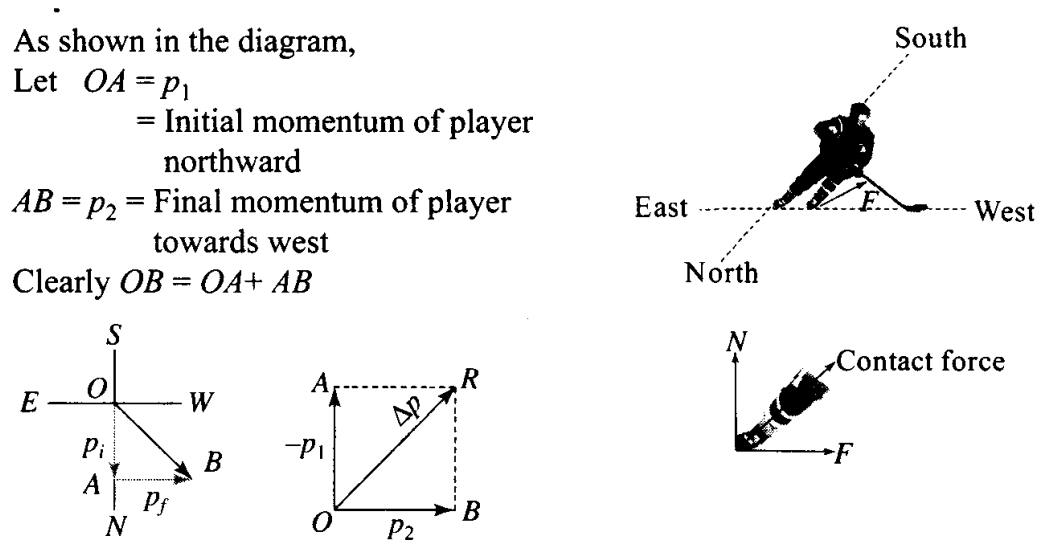 According to the problem, mass = 2 kg

If we again differentiate this equation w.r.t. time, we will get acceleration of the particle as a function of time. 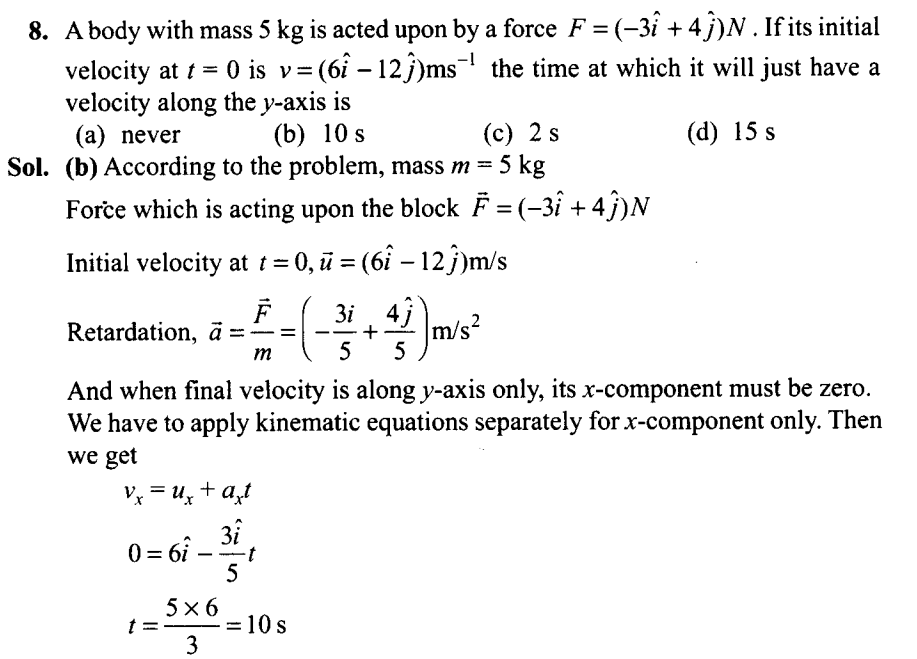 Let us assume the eastward
direction as x-axis.
A car is able to move towards due to friction acting between its tyres and the road.
The force of friction of the road on the tyre acts in the forward direction and is equal but in the opposite direction to the force of friction of the tyre on the road.
Mass of the car = m
As car starts from rest, its initial velocity u = 0 Velocity acquired along east = vi
Time interval (in which car acquired that velocity) t = 2 s.
As acceleration is uniform, so by applying kinematic equation (v = u + at), we get

More Than One Correct Answer Type

Which of the following statements is true?

Sol: (a, b, d) For different time intervals position of the particle is given. Hence,
we have to find velocity and acceleration corresponding to the intervals. 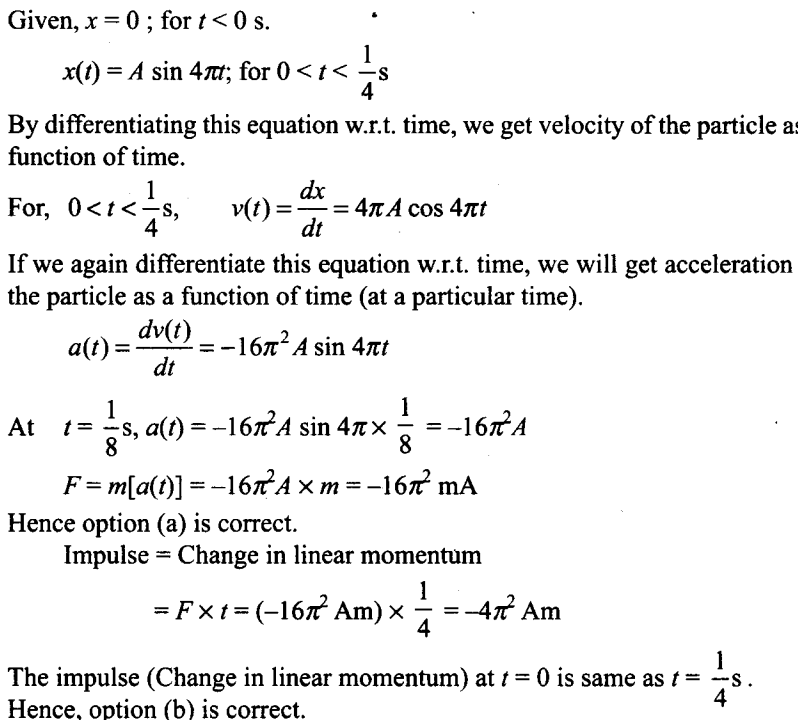 The impulse (Change in linear momentum) at t = 0 is same as t = 1/4 s. Hence, option (b) is correct.
We know that, force depends upon acceleration and which is not constant here. Hence, force is also not constant. Hence option (d) is also correct.
Important point: We have to keep in mind that the force is varying for different time intervals. Hence, we should apply differential formulae for each interval separately.

Sol: (a, b, d, e)
Key concept: A force F is applied to the lower body, then following four situations are possible. 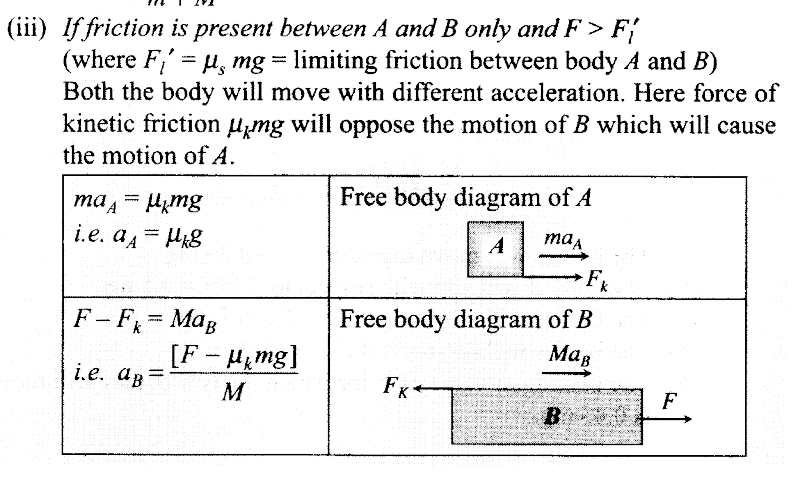 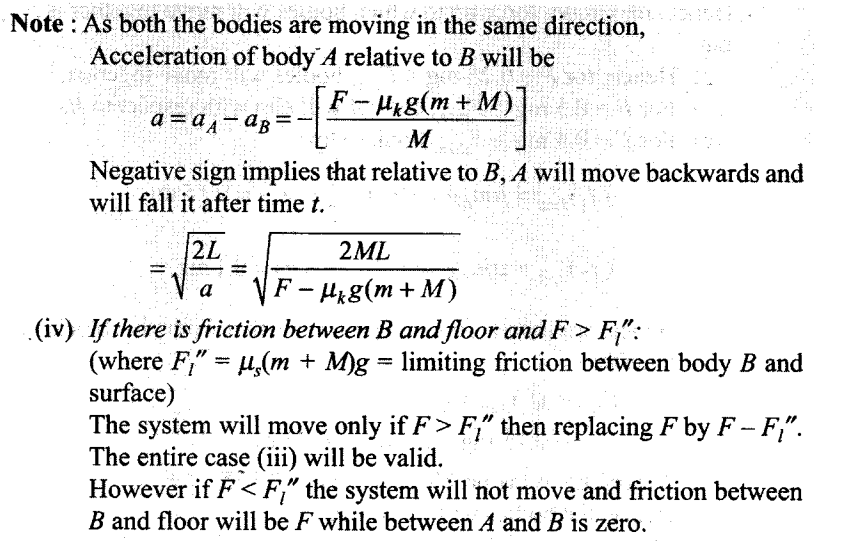 To here first we have to find first frictional forces on each surface and accordingly we will decide maximum force. The friction force always have tendency to oppose the motion.

Let A and B are moving together 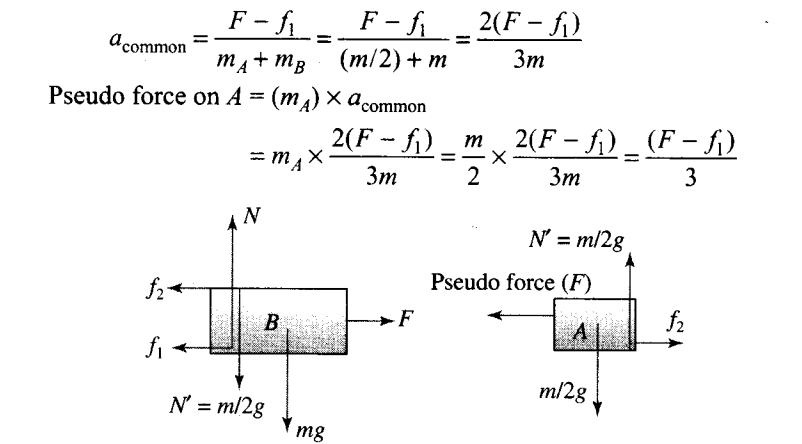 Q12. Mass m, moves on a slope making an angle Î¸ with the horizontal and is attached to mass m2 by a string passing over a frictionless pulley as shown in figure. The coefficient of friction between mu and the sloping surface is µ. Which of the following statements are true? 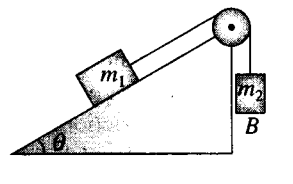 Sol: (b, d)
Key concept: When a mass mx is placed on a rough inclined plane: Another mass m2 hung from the string connected by ftictionless pulley, the tension IT) produced in string will try to start the motion of mass w,.
At limiting condition, 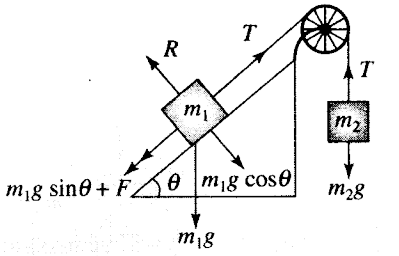 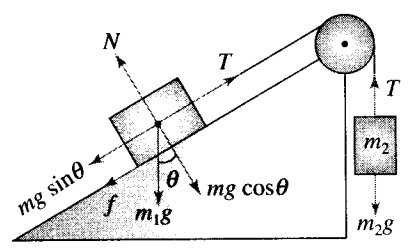 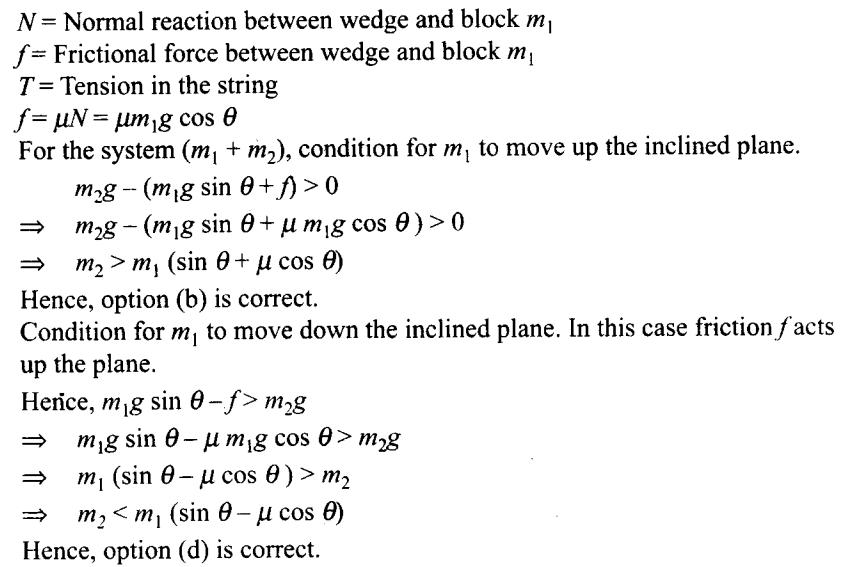 Q13. In figure a body A of mass m slides on a plane inclined at angle Î¸1 to the horizontal and µ is the coefficient of friction between A and the plane. A is connected by a light string passing over a frictionless pulley to another body 5, also of mass m, sliding on a frictionless plane inclined at an angle Î¸2 to the horizontal. Which of the following statements are true?

In this problem first we have to decide the direction of motion. Let block A moves up the plane friction force on A will be downward (along the plane) as shown. 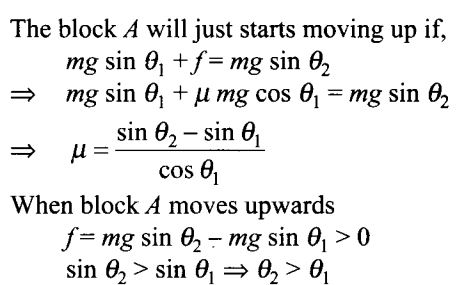 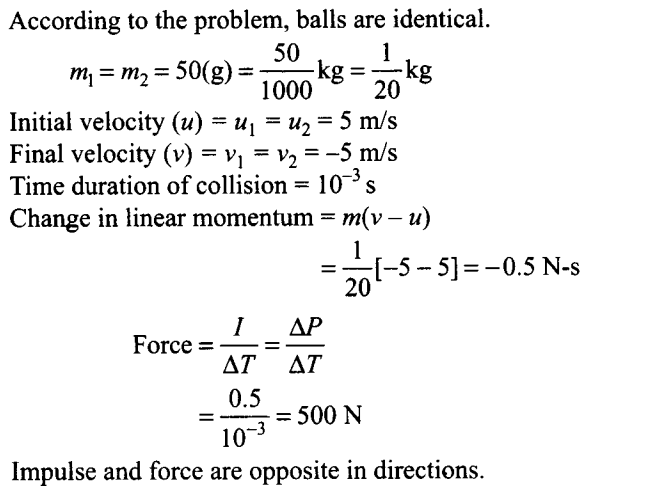 Q15.  Abody of mass 10 kg is acted upon by two perpendicular forces, 6 N and 8 N. The resultant acceleration of the body is

Sol: (a, c) Recall the concept of resultant of two vectors, when they are perpendicular 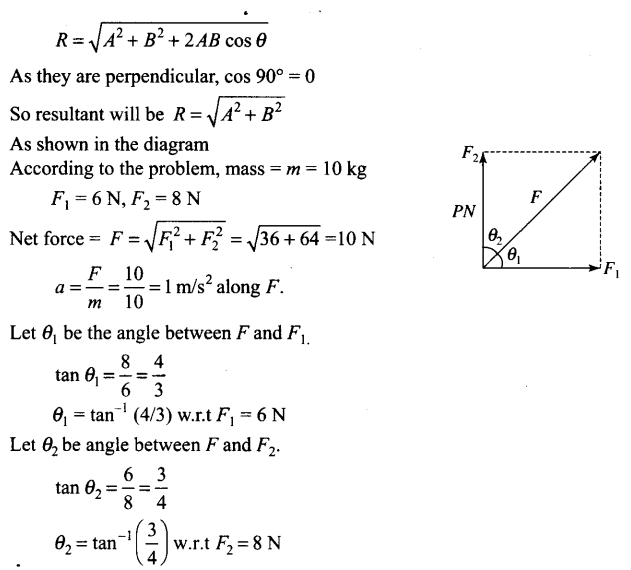