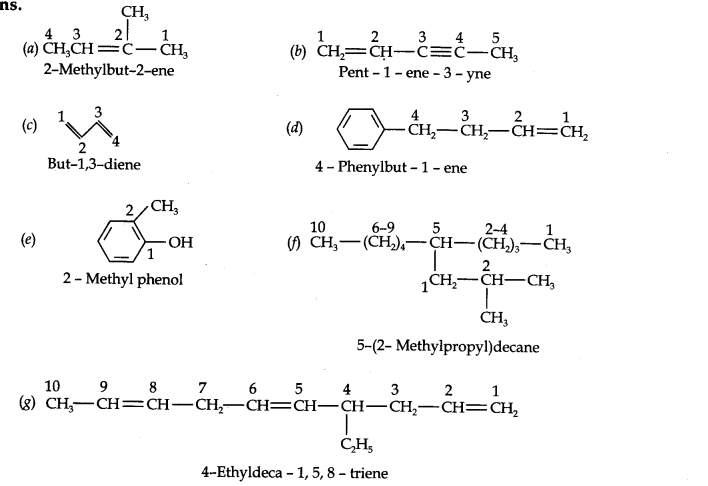 Question 3. For the following compounds, write structural formulas and IUPAC names for all possible isomers having the number of double or triple bond as indicated:
(a) C4H8 (one double bond) (b) C5H8 (one triple bond)
Answer:    (a) Isomers of C4H8 having one double bond are: 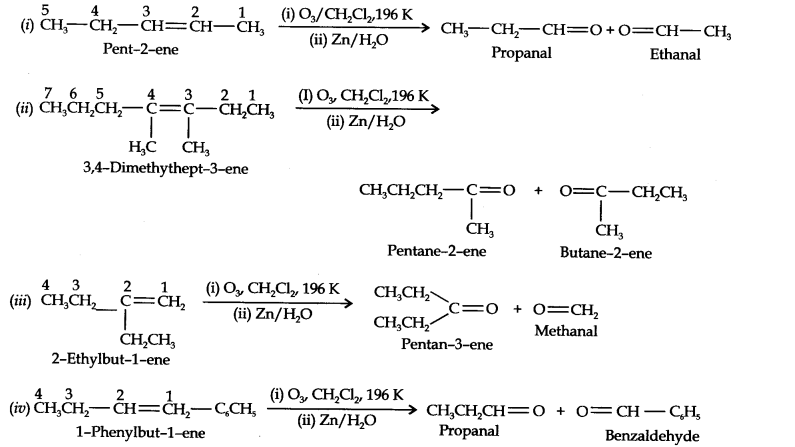 Step 2. Remove the oxygen atoms and join the two ends by a double bond, the structure of the alkene ‘A’ is

Question 6. An alkene ‘A’ contains three Câ€”C, eight Câ€”H, a-bonds, and one Câ€”C n-bond. ‘A’ on ozonolysis gives two moles of an aldehyde of molar mass 44 u. Write the IUPAC name of’A’.
Answer:    (i) An aldehyde with molar mass of 44 u is ethanal, CH3CH=0
(ii) Write two moles of ethanal side by side with their oxygen atoms pointing towards each other.

(iii) Remove the oxygen atoms and join them by a double bond, the structure of alkene ‘A’ is

(ii) Remove oxygen atoms and join the two fragments by a double bond, the structure of the alkene is

Question 10. Why is benzene extra-ordinarily stable though it contains three double bonds?
Answer:

The six electrons of the p-orbitals cover all the six carbon atoms, and are said to be delocalized. As a result of delocalization there formed a stronger n-bond and a more stable molecule.

Question 12. Explain why the following systems are not aromatic?

Cyclo-octatetraene is not planar but is tub shaped. It is, therefore, a non-planar system having 8 n-electrons.
Therefore, the molecule is not aromatic since it does not contain a planar cyclic cloud having (4n + 2) n-electrons.

Question 13. How will you convert benzene into  (i)p-nitrobromobenzene (ii) m-nitrochlorobenzene (iii) p-nitrotoluene (iv) acetophenone?
Answer:  (i) The two substituents in the benzene ring are present at p-positions. Therefore, the sequence of reactions should be such that first an o, p-directing group, i.e., Br atom should be introduced in the benzene ring and this should be followed by nitration. Thus,

(iii)Here since the two substituents are at m-position w.r.t. each other, therefore, the first substituent in the benzene ring should be a m-directing group (i.e., NO2) and then other group (i.e.,Cl) should be introduced.

(iv)Acetophenone can be prepared by F.C. acylation using either acetyl chloride or acetic anhydride.

Question 16. Addition of HBr to propene yields 2-bromopropane, while in presence of benzoyl peroxide, the same reaction yields 1-bromopropane. Explain and give mechanism.
Answer:  Addition of HBr to propene is an ionic electrophilic addition reaction in which the electrophile, i.e., H+ first adds to give a more stable 2 ° carbocation. In the 2nd step, the carbocation is rapidly attacked by the nucleophile Br~ ion to give 2-bromopropane.

In the first step, Br radical adds to propene in such a way so as to generate the more stable 2 ° free radical. In the second step, the free radical thus obtained rapidly abstracts a hydrogen atom from HBr to give 1-bromopropane.

From the above discussion, it is evident that although both reactions are electrophilic addition reactions but it is due to different order of addition of H and Br atoms which gives different products.

Question 17. Write down the products ofozonolysis ofl, 2-dimethylbenzene (o-xylene). How does the result support Kekule structure of benzene?
Answer:  o-Xylene may be regarded as a resonance hybrid of the following two Kekule structures. Ozonolysis of each one of these gives two products as shown below: 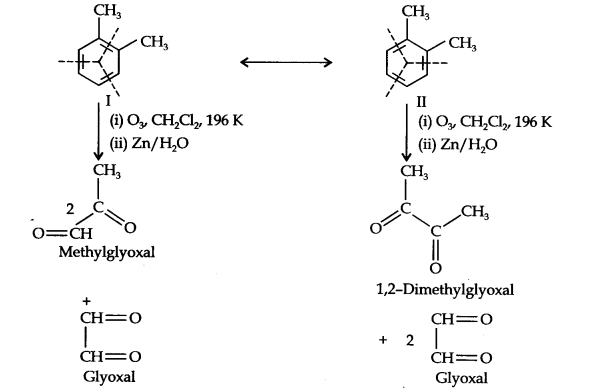 Question 18. Arrange benzene, n-hexane and ethyne in decreasing order of acidic behaviour. Also give reason for this behaviour.
Answer:  The hybridization state of carbon in these three compounds is:

Since s-electrons are closer to the nucleus, therefore, as the s-character of the orbital making the Câ€”H bond increases, the electrons of Câ€”H bond lie closer and closer to the carbon atom. In other words, the partial +ve charge on the H-atom and hence the acidic character increases as the s-character of the orbital increases. Thus, the acidic character decreases in the order: Ethyne > Benzene > Hexane.

Question 20. How will you convert the following compounds into benzene?
(i) Ethyne (ii) Ethene (iii) Hexane.
Answer: 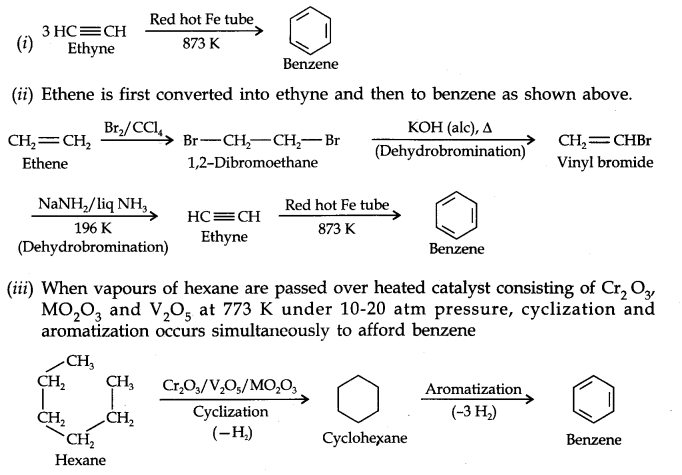 Question 21. Write structures of all the alkenes which on hydrogeneration give 2-methylbutane.
Answer:

Question 22. Arrange the following set of compounds in order of their decreasing relative reactivity with an electrophile, E+.
(a) Chlorobenzene, 2, 4-dinitrochlorobenzene, p-nitrochlorobenzene
(b) Toluene,pâ€”H3Câ€”C6H4â€”NO2, pâ€”O2Nâ€”C6H4â€”NO2.
Answer:  (a) The typical reactions of benzene are electrophilic substitution reactions. Higher the electron-density in the benzene ring, more reactive is the compound towards these reactions. Since N02 is a more powerful electron-withdrawing group than Cl, therefore, more the number of nitro groups, less reactive is the compound. Thus, the overall reactivity decreases in the order:
Chlorobenzene > p-nitrochlorobenzene > 2, 4-dinitrochlorobenzene
(b) Here, CH3 group is electron donating but N02 group is electron-withdrawing. Therefore, the maximum electron-density will be in toluene, followed by p-nitrotoluene followed by p-dinitrobenzene. Thus, the overall reactivity decreases in the order:
Toluene >pâ€”H3Câ€”C6H4â€”NO2, pâ€”O2Nâ€”C6H4â€”NO2.

Question 2. What are conformations?
Answer:    Conformations are spatial arrangements which are obtained by rotation around sigma bonds.

Question 3. What is decarboxylation ? Give an example.
Answer:  The process by which carbon dioxide is removed from sodium acetate (or any sodium salt of acid) with the help of sodalime is called decarboxylation.

Question 4. What do you mean by pyrolysis?
Answer:  The decomposition of a compound by heat is called pyrolysis. This process when applied to alkanes is known as cracking.

Question 5. What happens when ethanol is heated with cone. H2SO4?
Answer:

Question 8. What happens when benzene is treated with excess of Cl2 in presence of sunlight? Give chemical reaction.
Answer:

Question 12. Although benzene is highly unsaturated it does not undergo addition reactions. Why?
Answer:  It is due to delocalization of  Ï€  -electrons in benzene it is highly stable.

Question 13. Why are Alkenes called olefins?
Answer:  Alkenes are commonly known as olefins because the lower members form oily products on treatment with chlorine or bromine.

Question 16. How will you distinguish between propene and propane?
Answer:  Pass them through dilute cold KMnO4solution (purple) or Br2 in CCl4 solution (red). Propene will decolourise both the solutions but propane does not react.

Question 17. How will you distinguish between acetylene and ethylene?
Answer:  Acetylene forms precipitate with ammoniacal silver nitrate solution, ethylene does not react with these reagents.

Question 18. What happens when benzene is treated with acetyl chloride in presence of AlCl3?
Answer:    Acetophenone is formed.

Question 19. Which type of isomerism is exhibited by but-l-yne and but-2-yne?
Answer:  Position isomerism.

Question 20. What is electrophile in sulphonation?
Answer:  SO3.

Question 21. What is the hybridisation of central carbon in 1,2-propadiene (CH2=C=CH2)?
Answer:  sp.

Question 2. Explain the following with examples:
(i) Wurtz reaction
(ii) Hydrogenation.
Answer:  (i) Wurtz reaction: Alkanes are produced by heating an alkyl halide with sodium metal in dry ether solution.

Question 3. Discuss the shape of methane and ethane.
Answer:  In methane, carbon forms have single bonds with four hydrogen atoms. Since the carbon atom is attached to four other atoms, it uses sp3 hybrid orbitals to form these bonds. Hybridization of ‘C’ is sp3

Shapeâ€”tetrahedral having bond angle = 109.5 °
In ethane, there are six Câ€”H covalent bonds and one Câ€”C covalent bond.
The Câ€”H bond is the result of overlap of an sp3 hybrid orbital from carbon and s-orbital from hydrogen.
Orbital structure can be shown as

Question 5. What is polymerization? Give an example.
Answer:    The process by which simple molecules join together to form large molecules is known as polymerization.
Simple alkenes polymerize to form long chain addition polymers.
For example, ethylene gives polyethylene. 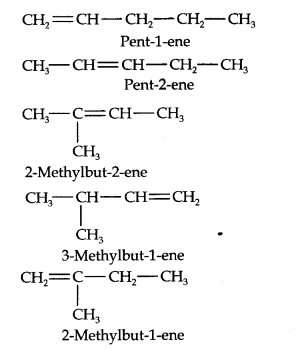 Question 10. How will you convert ethanoic acid into ethene?
Answer: 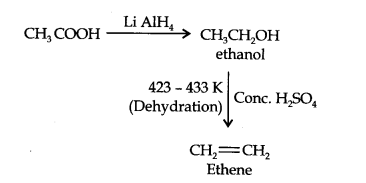 Question 1. Explain the term aromaticity. What are the necessary conditions for any compound to show aromaticity?
Answer:  The aromatic compounds apparently contain alternate double and single bonds in a cyclic structure, and resemble benzene in chemical behaviour. They undergo substitution reactions rather addition reactions. This characteristic behaviour is called Aromatic character or Aromaticity.
Conditions for Aromaticity:

A hydrogen atom of the methane molecule is replaced by chlorine atom. Benzene undergoes electrophilic substitution reactions because benzene ring has delocalized electrons is an electron-rich system. It is attacked by electrophiles giving substitution products.

Question 3. (a) What type of isomerism is shown by methoxymethane and ethanol?
(b) How will you bring out the following conversions.
(i) Acetylene to ethane (ii) Benzene to Toluene (iii) Ethanol to ethene?
Answer:  (a) Functional isomerism. 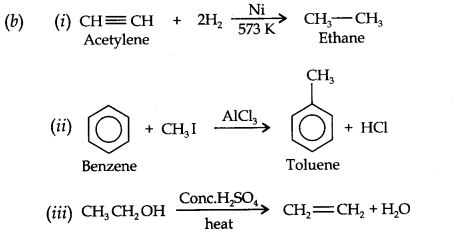 Question 4. Discuss the preparation of alkanes by Wurtz reaction. What is the limitaHon of the reaction?
Answer:    Wurtz synthesis: Higher alkanes are prepared by heating an alkyl halide (RX) with sodium metal in dry ether solution.

Limitations: Use of two different alkyl halides in Wurtz reaction always leads to a mixture of alkanes. The separation of these alkanes is difficult because there is only a little difference in their boiling points. Thus only symmetrical alkanes can be prepared by this method.

Question 5. (a) Why are alkenes called unsaturated hydrocarbons?
(b) How will you test the presence of double bond in an alkene?
(c) Name the products formed when propene is subjected to ozonolysis.
Answer:    (a) Alkenes contain two hydrogen atoms less than alkanes and thus they contain Câ€”C double bond (C=C) in their molecule. Thus they are called unsaturated hydrocarbons.
(b) Alkenes react with cold dilute KMn04 solution to form gycols. Since bright purple colour of KMn04 disappears during the reaction it is used as a test for the presence of double bond.
(c) A mixture of acetaldehyde and formaldehyde is formed.

(a) HgSO4 (b) Pt (c) AICl3 (d) Pd
Question 5. Which conformation of ethane has the lowest potential energy?
(a) Eclipsed (b) Skewed
(c) Staggered (d) All will have equal PE
Question 6. Baeyer’s reagent is
(a) aqueous KMn04 (b) neutral KMn04
(c) alkaline KMn04 (d) aqueous bromine water
Question 7. Benzene reacts with acetyl chloride in the presence of A1C13 to give
(a) acetophenone (b)toluene
(c)benzophenone (d) ethyl benzene
Question 8. An aqueous solution of compound A gives ethane on electrolysis, the compound A is
(a) Ethyl acetate (b) Sodium acetate
(c) Sodium propionate (d) Sodium ethoxide
Question 9. Tolueue reacts with chlorine in the presence of light to give
(a) benzyl choride (b) benzoyl chloride
(c) p-chlorotoluene (d) o-chlorotoluene
Question 10. Which of the following is less reactive than benzene towards electrophilic substitution reactions?
(a) Nitrobenzene (b) Aniline
(c) Bromobenzene (d) Chlorobenzene
Answer:  1. (a) 2. (d) 3. (c) 4. (a) 5. (c)
6. (c) 7. (a) 8. (b) 9. (a) 10. (a)

Question 1. What effect does branching of an alkane chain has on its boiling point?
Answer:  As branching increases, the surface area of the molecule decrease which results in a small .area of contact. As a result, the van der Waals force also decrease which can be overcome at a relatively lower temperature. Hence, the boiling point of an alkane chain decreases with an increase in branching.

Question 2. An alkene ‘A’ contains three C-C, eight C-H Ïƒ bonds and one C-C Ï€ bond. â€˜A’ on ozonolysis gives two moles of an aldehyde of molar mass 44 u. Deduce IUPAC name of’A’.
Answer:  The formation of two moles of an aldehyde indicates the presence of identical structural units on both sides of the double bond containing carbon atoms. Hence, the structure of ‘A’ can be represented as:  XC = CX
There are eight C-H Ïƒ bonds. Hence, there are 8 hydrogen atoms in ‘A’. Also, there are three C-C bonds. Hence, there are four carbon atoms present in the structure of ‘A’.
The IUPAC name of ‘A’ is But-2-ene.
Ozonolysis of ‘A’ takes place as:

Question 4. How will you separate propene from propyne?
Answer:  By passing the mixture through ammonical silver nitrate solution when propyne reacts while propene passes over.

Question 5. Write the structure of the alkene which on reductive ozonolysis gives butanone and ethanol.
Answer:  CH3CH2C(CH3) = CHCH3