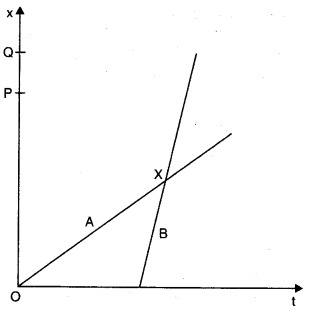 Answer:  (a) A lives closer to school than B, because B has to cover higher distances [OP < OQ],
(b) A starts earlier for school than B, because t = 0 for A but for B, t has some finite time.
(c) As slope of B is greater than that of A, thus B walks faster than A.
(d) A and B reach home at the same time.
(e) At the point of intersection (i.e., X), B overtakes A on the roads once. 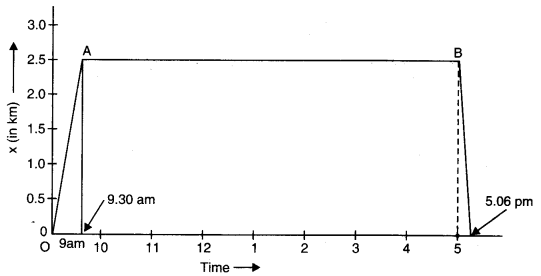 Question 3. 4. A drunkard walking in a narrow lane takes 5 steps forward and 3 steps backward, followed again by 5 steps forward and 3 steps backward, and so on. Each step is 1 m long and requires 1 s. Plot the x-t graph of his motion. Determine graphically and otherwise how long the drunkard takes to fall in a pit 13 m away from the start.
Answer:    Since the man steadily moves forward as the time progresses so the following graph will represent his motion till he covers 13 m. In 5 s he moves through a distance of 5 m and then in next 3 s comes back by 3 m.
Thus in 8 s he covers only 2 m, as shown in the graph he would fall in the pit in 37 s.

Question 3. 6. A car moving along a straight highway with speed of 126 km h-1 is brought to a stop within a distance of 200 m. What is the retardation of the car (assumed uniform), and how long does it take for the car to stop?
Answer:

Question 3. 8. On a two-lane road, car A is travelling with a speed of 36 km h-1. Two cars B and C approach car A in opposite directions with a speed of 54 km h-1 each. At a certain instant, when the distance AB is equal to AC, both being 1 km, B decides to overtake A before C does. What minimum acceleration of car B is required to avoid an accident?
Answer: 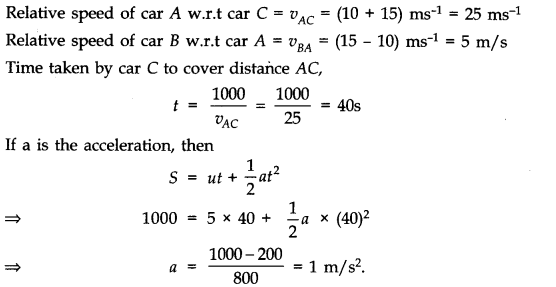 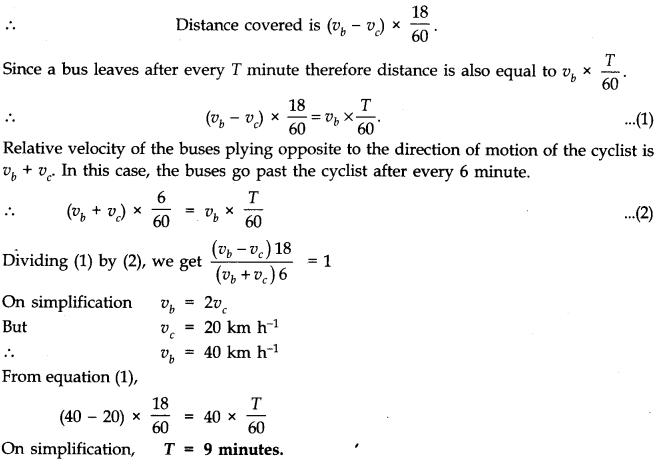 Question 3. 11. Read each statement below carefully and state with reasons and examples, if it is true or false; A particle in one-dimensional motion
(a) with zero speed at an instant may have non-zero acceleration at that instant.
(b) with, zero speed may have non-zero velocity.
(c) with constant speed must have zero acceleration,
(d) with positive value of acceleration must be speeding up.
Answer:    (a) True. Consider a ball thrown up. At the highest point, speed is zero but the acceleration is non-zero.
(b) False. If a particle has non-zero velocity, it must have speed.
(c) True. If the particle rebounds instantly with the same speed, it implies infinite acceleration which is physically impossible.
(d) False. True only when the chosen position direction is along the direction of motion.

Question 3. 12. A ball is dropped from a height of 90 m on a floor. At each collision with the floor, the ball loses one tenth of its speed. Plot the speed-time graph of its motion between t =0 to 12 s.
Answer: 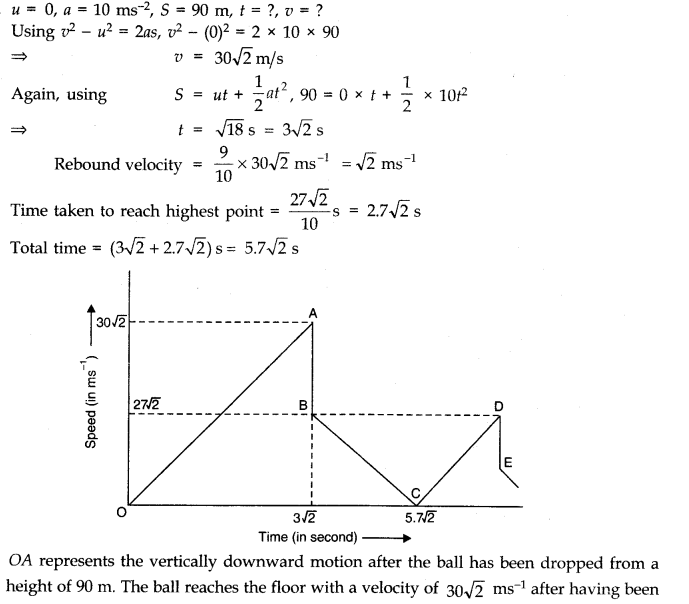 Question 3. 13. Explain clearly, with examples, the distinction between:
(a) Magnitude of displacement (sometimes called distance) over an interval of time, and the total length of path covered by a particle over the same interval;
(b) Magnitude of average velocity over an interval of time, and the average speed over the same  interval. (Average speed of a particle over an interval of time is defined as the total path length divided by the time interval). Show in both (a) and (b) that the second quantity is either greater than or equal to the first. When is the equality sign true? [For simplicity, consider one dimensional motion only],
Answer:  (a) Suppose a particle goes from point A to B along a straight path and returns to A along the same path. The magnitude of the displacement of the particle is zero, because the particle has returned to its initial position. The total length of path covered by the particle is AB + BA = AB + AB = 2 AB. Thus, the second quantity is greater than the first,
(b) Suppose, in the above example, the particle takes time t to cover the whole journey. Then, the magnitude of the average velocity of the particle over time-interval t is = Magnitude of displacement /Time-interval =0/t =0
While the average speed of the particle over the same time-interval is =Total path length /Time-interval= 2 AB /t
Again, the second quantity (average speed) is greater than the first (magnitude of average velocity).
Note: In both the above cases, the two quantities are equal if the particle moves from one point to another along a straight path in the same direction only.

Question 3.14. A man walks on a straight road from his home to a market 2.5 km away with a speed of 5 km h-1 .Finding the market closed, he instantly turns and walks back home with a speed of 7.5 km h-1 What is the  (a)Magnitude of average velocity, and  (b)Average speed of the man over the interval of time (i) 0 to 30 min. (ii) 0 to 50 min. (iii) 0 to 40 min? [Note: You will appreciate from this exercise why it is better to define average speed as total path length divided by time, and not as magnitude of average velocity. You  would not like to tell the tired man on his return home that his average speed was zero!]
Answer: 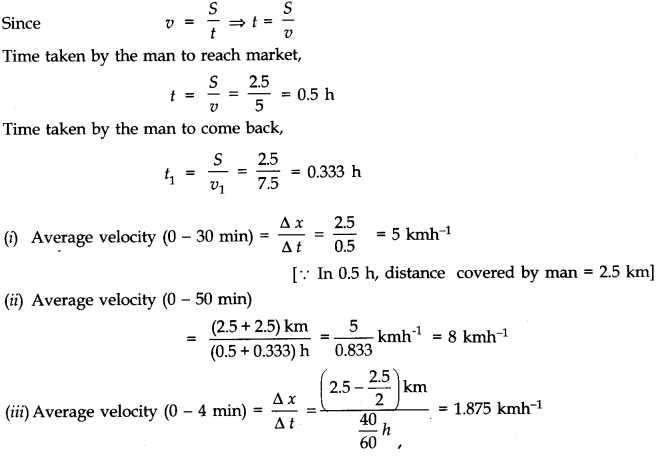 Question 3. 16. Look at the graphs (a) to (d) Fig. carefully and state, with reasons, which of these cannot possibly represent one-dimensional motion of a particle.

Answer:  None of the four graph represent a possible one-dimensional motion. In graphs (a) and (b) motions are definitely two dimensional. Graph (a) represents two positions at the same time which is not possible.
In graph (b) opposite motion is visible at the same time.
The graph (c) is not correct since it shows that the particle has negative speed at a certain instant. Speed is always positive.
In graph (d) path length is shown as increasing as well as decreasing. Path length never decreases.

Question 3. 17. Figure shows the x-t plot of one-dimensional motion of a particle.
Is it correct to say from the graph that the particle moves in a straight line for t < 0 and on a parabolic path for t > 0? If not, suggest a suitable physical context for this graph. 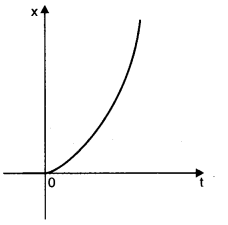 Answer:    It is not correct to say that the particle moves in a straight line for t < 0 (i.e., -ve) and on a parabolic path for t > 0 (i.e., + ve)
because the x-t graph can not show the path of the particle.
For the graph, a suitable physical context can be the particle thrown from the top of a tower at the instant t =0.

Question 3. 19.  Suggest a suitable physical situation for each of the following graphs:

Answer:  (a) A ball at rest on a smooth floor is kicked. It rebounds from a wall with reduced speed and moves to the opposite wall which stops it.
(b) The graph shows that velocity changes again and again with the passage of time and every time losing some speed. Therefore, it may represent a physical situation such as a ball falling freely (after thrown up), on striking the ground rebounds with reduced speed after each hit against the ground.
(c) A uniformly moving cricket ball turned back by hitting it with a bat for a very short time-interval.

Question 3. 20. Figure gives the x-t plot of a particle executing one ¬dimensional simple harmonic motion. (You will learn about this motion in more detail in Chapter 14). Give the signs of position, velocity and acceleration variables of the particle at t = 0.3 s, 1.2 s, – 1.2 s.
Answer:  In x-t graph of Fig. showing simple harmonic motion of a particle, the signs of position, velocity and acceleration are as given below. 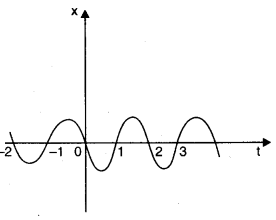 Question 3. 21. Figure gives the x-t plot of a particle in one-dimensional motion. Three different equal intervals of time are shown. In which interval is the average speed greatest, and in which is it the least? Give the sign of average velocity for each interval. 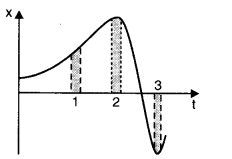 Question 3. 22. Figure gives a speed-time graph of a particle in motion along a constant direction. Three equal intervals of time are shown. In which interval is the average acceleration greatest in magnitude? In which interval is the average speed greatest? Choosing the positive direction as the constant direction of motion, give the signs of v and a in the three intervals. What are the accelerations at the points A, B, C and D? 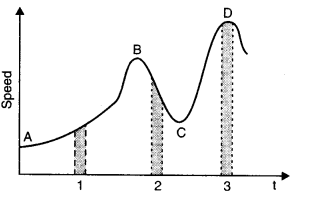 Question 3. 23. A three – wheeler starts from rest , accelerates uniformly with 1 m s-2 on a straight road for 10 s, and then moves with uniform velocity .plot the distance covered by the vehicle during the n th second (n=1,2,3……..) versus n. what do you expect this plot to be during accelerated motion: a straight line or a parabola?
Answer:

Question 3. 24. A boy standing on a stationary lift (open from above) throws a ball upwards with the maximum initial speed he can, equal to 49 m s-1. How much time does the ball take to return to his hands? If the lift starts moving up with a uniform speed of 5 m s-1 and the boy again throws the ball up with the maximum speed he can, how long does the ball take to return to his hands?
Answer:    When either the lift is at rest or the lift is moving either vertically upward or downward with a constant speed, we can apply three simple kinetnatic motion equations presuming a = ± g (as the case may be).In present case u = 49 ms-1 (upward) a = g = 9.8 ms-2 (downward)
If the ball returns to boy’s hands after a time t, then displacement of ball relative to boy
is zero i.e., s = 0. Hence, using equation s = ut + 1/2 at 2, we have

Question 3. 25. On a long horizontally moving belt (Fig.), a child runs to and fro with n speed 9 km h-1 (with respect to the belt) between his father and mother located 50 a part on the moving belt. The belt moves with a speed of 4 km h-1 . For an observe a stationary platform outside, what is the
(a) Speed of the child running in the direction of motion of the belt?
(b) Speed of the child running opposite to the direction of motion of the belt?
(c) Time taken by the child in (a) and (b)?
Which of the answers alter if motion is viewed by one of the parents?

Question 3. 26. Two stones are thrown up simultaneously from the edge of a cliff 200 m high with initial speeds of 15 ms-1 and 30 ms-1. Verify that the graph shown in Fig. correctly represents the time variation of the relative position of the second stone with respect to the first. Neglect air resistance and assume that the stones do not rebound after hitting the ground. Take g = 10 ms-2. Give the equations for the linear and curved parts of the plot. 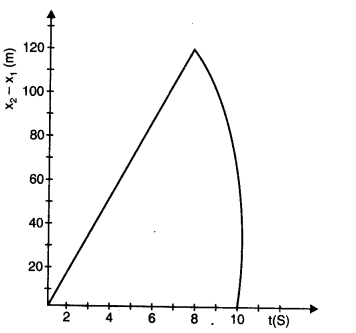 Question 3. 27. The speed-time graph of a particle moving along a fixed direction is shown in Fig. Obtain the distance traversed by the particle between
(a) t = 0 s to 10 s. (b) t = 2 s to 6 s.
What is the average speed of the particle over the intervals in (a) and (b)? 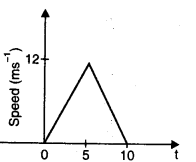 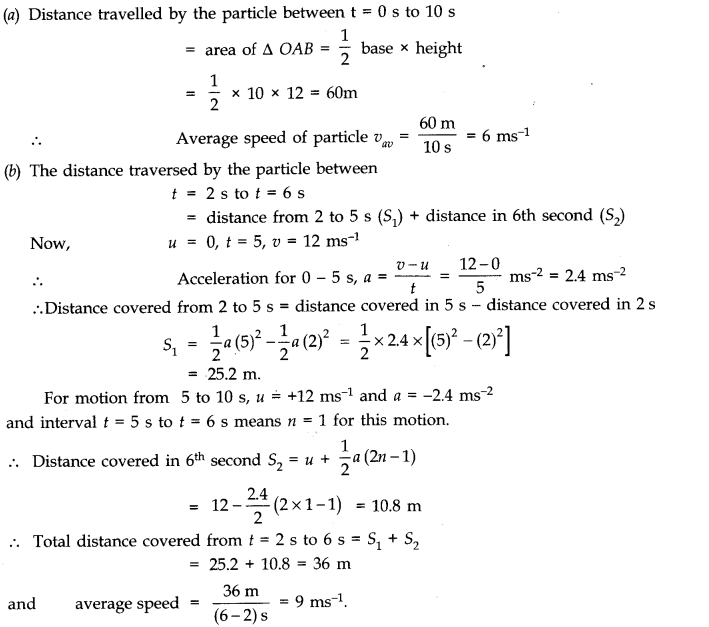 Question 3. 28.  The velocity-time graph of a particle in one-dimensional motion is shown below. Which of the following formula are correct for describing the motion of the particle over the time interval from  t1 to t2?

Answer:  (c),(d),(f).
As it is evident from the shape of v-t graph that acceleration of the particle is not uniform between time intervals t1  and t2. (since the given v-t graph is not straight). The equations (a), (b) and (e) represent uniform acceleration.