Question.3. What is the major reason under lying trade between nations?
Answer. The major reason behind international business is that the countries cannot produce equally well or cheaply all the commodities. This is called theory of comparative cost advantage. It is so because resources are unequally distributed in natural resources. Some countries are abundant in one commodity and scarce in others while opposite is true for some other country. It makes a case for international trade and exchanging abundant commodity with scarce commodity by nations. Different nations are endowed with different factors of production which includes land, labour, capital and entrepreneurship. For example, India is a labour abundant country. Therefore, it is advisable for India to produce such commodities which use labour intensive methods and exchange it for those which use capital intensive methods. USA is a capital abundant country. Therefore, nations need to trade. Due to these reasons one country has a comparative advantage in production of particular goods as compared to other countries. Consequently, each country fins it advantageous to produce those selected goods and services that it can produce more effectively at home and importing those goods in which other nations have a comparative cost advantage.

Question 4. Discuss as to why nations trade.
Answer:    Nations trade because of following reasons:

Question 10.What are the major items that are exported from India?
Answer:  India’s major items of exports include textiles, garments, gems and jewellery, engineering products and chemicals, agriculture and allied products.

III. Long Answer Type Questions
Question 1. What is international business? How is it different from domestic business?
Answer:    International business refers to business which is carried on in two or more nations. It means carrying on business activities beyond national boundaries. These activities normally include the transaction of economic resources such as goods, capital, services (comprising technology, skilled labour, and transportation, etc.), and international production. It refers to that business activity that takes place beyond the geographical limits of a country. Production may either involve production of physical goods or provision of services like banking, finance, insurance, construction, trading, and so on. Thus, international business includes not only international trade of goods and services but also foreign investment, especially foreign direct investment.
Differences between International Business and Domestic Business are summarised below: 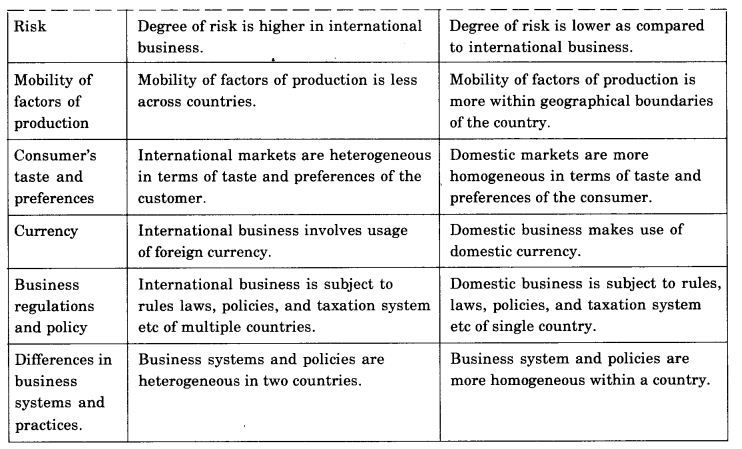 Question 3. What benefits do firms derive by entering into international business?
Answer:    The trade between two or more nations is termed as foreign trade or international trade. It involves exchange of goods and services between the trades of two countries. Foreign trade consists of import trade, export trade and entrepot trade. In the early stages of human civilization, production was confined as per consumption. Human wants were limited. Nowadays, human wants are increasing and as such no man was considered to be self-dependent. Like this no country can live in isolation and claimed the status to be self-sufficient. Because of this reason countries have trade relationships with each other. The primary objective of foreign trade is to increase foreign trade and increase the standard of living of its people. There is an increasing demand for foreign trade because of the following reasons:

Question 6. Discuss the major trends in India’s foreign trade. Also list the major products that India trades with other countries.
Answer:    India is 10th largest economy in the world. It is the second fastest growing economy, next only to China. But India’s performance in international business is not very good. India’s share in world trade in 2003 was just 0.8%. In absolute terms, there has been significant increase in imports as well as exports. Total exports have increased from 606 crores in 1950-51 to Rs. 2, 93,367 crores in 2003-04 while imports have increased from 608 crores in 1950-51 to 3, 59,108 crores in 2003-04. Exports increased 480 times while imports increased 590 times indicating that there is adverse balance of trade. India’s major trading partners are USA, UK, Germany, Japan, Belgium, Hong Kong, UAE, China, Switzerland, Singapore and Malaysia.
India’s major items of exports include: Textiles, garments, gems and jewellery, engineering products and chemicals, agriculture and allied products.
India’s major items of imports include: Crude oil and petroleum products, capital goods, electronic goods, pearls, precious and semi precious stones, gold, silver and chemicals.
Before 1991, promotion of import substitution and discouraging of exports was government strategy. Imports consisted of machinery, equipment and intermediates in production, petroleum and petroleum-products. After green revolution, imports of fertilizer too increased.
Before 1991, India’s exports consisted of agricultural products like tea, raw cotton with the diversifying industrial structure, promoted by import substitution, exports of manufactures were growing. During 1986-91, external trade formed only 13.40 % of the GDP. During the 1990-2000, this share is rising continuously.
India’s foreign trade has grown to exports of $250 billion and imports of $380 billion in 2010-11. The ratio of exports plus imports to GDP has grown from 13.40 % during 1985-90 to almost three times that, being 37.7 % in 2010-11. On adding services it becomes from 22.9 % in the 1990s to 49.0 % in 2010-11.
Leading role has been played by â€˜invisibles’ which includes both services, mainly software services, export of which has grown to $59 billion in 2010-11. It has decreased the current account deficit from $130 billion to $44. This deficit was compensated by capital account surplus of $59 billion in that year.
But it is only because of IT services and we are still lacking in manufacturing exports which can generate a large volume of employment. We have not done as well as China and Malaysia have done.

Question 7. What is invisible trade? Discuss salient aspects of India’s trade in services.
Answer:    Trade in services is called invisible trade. Since services are invisible, export and import of services has been named as invisible trade. In absolute terms, there has been significant increase in India’s foreign trade in services. Export and import of foreign travel, transportation and insurance has largely increased during last four decades. There has been a change in composition of services exports. Software and other miscellaneous services have emerged as the main categories of India’s export of services. Share of travel and transportation has declined to 29.6% in 2003-04 from 64.3% in 1995-96 while the share of software exports has increased from 10.2% in 1995-96 to 49% in 2003-04.

The composition of India’s external trade has been changing. During 1950s and 60s exports were mainly of primary goods. Over time, the role of engineering goods has been increasing. Overall manufactured goods constitute 66 % of total exports, of which engineering goods are 27%. Textiles and textile products, garments and leather products make around 10 % of India’s exports.
In nutshell, we can say that the role of the external or internationally traded goods sector has been growing steadily in Indian economy. At present imports and exports together account for upto 49 % of India’s GDP which was 18% in 1990s. In India there is greater share of exports of services which are IT software services, called IT- enabled services (ITES). It contributed more than 20% of India’s export earnings. India accounts for about 45% of the world’s BPO services. The major Indian IT companies, TCS, Infosys and Wipro, initiated and perfected the Global Services Delivery (GSD) model. It is because India has a vast pool of software engineers and an even bigger pool of English-knowing staff. With growing competition in the market for such services, Indian companies have moved from BPO to Knowledge Process Outsourcing (KPO), which involves providing services for R and D and to high-end consulting.

Question 2. What is the basic reason behind international trade?
Answer:    Comparative cost advantage in production of some goods.

Question 4. When a middleman is involved in handling export procedure, then it is called by what name?
Answer:    Indirect exporting

Question 5. Licensee or franchisee pays a fee to licensor or franchisor. What is it called?
Answer:  Royalty.

Question.6. Reebok orders for footballs to local manufacturers of Ludhiana and then sells it all over the world. It is an example of what?
Answer:    Contract manufacturing.

Question 7. Name the country whose share is largest in India’s exports and imports.
Answer:    USA

Question 9. Which service has got dominating share in foreign trade in services?
Answer:    Software and Miscellaneous

Question 2. Explain different forms of Joint Ventures.
Answer:    A joint venture refers to establishing a firm which is jointly owned by two or more independent firms. It can be entered into three ways:

Question 4. India embarks on the path of globalisation. Comment
Answer:    Since 1991, with the announcement of New Economic Policy, 1991 India also embarks on the path of globalisation. India was facing a severe financial crisis. It approached International Monetary Fund and World Bank for help. IMF agreed to led money to India on the condition that India will introduce structural changes in its economy. As a result, India announced the policy of LPG i.e. Liberalisation, Privatisation and Globalisation. Then on 1 January, 1995 WTO was formed. India became founder member of WTO and thereby was under a compulsion to follow rules and regulations of WTO. Therefore, it had to open up its economy for rest of the world and they also allowed India to enter their markets. Though the process of reforms has somewhat slowed down, India is very much on the path of globalisation.

Question 7. Discuss the merits and demerits of entering into joint ventures.
Answer:    Merits of Joint Venture

The benefits of international business to firms are as follows:

Question 3. Licensing and franchising are suitable in different situations. Explain how?
Answer:    Yes, it is right to say that licensing and franchising are suitable in different situations. For a company looking to expand, franchising and licensing are often appealing business models. In a franchising model, the franchisee uses another firm’s successful business model and brand name to operate what is effectively Em independent branch of the company. The franchiser maintains a considerable degree of control over the operations and processes used by the franchisee, but also helps with things like branding and marketing support that aid the franchise. The franchiser also typically ensures that branches do not cannibalize each other’s revenues.
Under a licensing model, a company sells licenses to other (typically smaller) companies to use intellectual property (IP), brand, design or business programs. These licenses are usually non-exclusive, which means they can be sold to multiple competing companies serving the same market. In this arrangement, the licensing company may exercise control over how its IP is used but does not control the business operations of the licensee.
Both models require that the franchisee/licensee make payments to the original business that owns the brand or intellectual property. There are laws that govern the franchising model and define what constitutes franchising; some agreements end up being legally viewed as franchising even if they were originally drawn up as licensing agreements. It can be clarified from the differences given below: 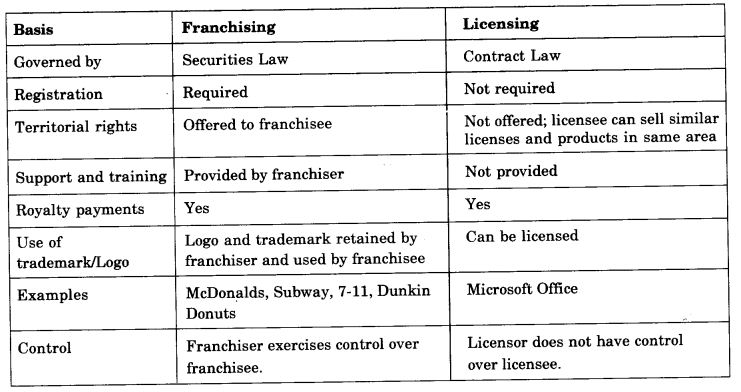 Question 5. State the important changes being observed in composition of India’s external trade since 2007-08.
Answer:    Till 1980’s exports were mainly of primary goods, viz. agricultural commodities and raw materials, such as minerals. Over time, the role of manufactures including engineering goods has been increasing. Share of manufactured goods is 66 % of total exports, of which engineering goods contribute 27 % of the value of goods exported. Composition of India’s external trade since 2007-08 is shown below:
India’s Exports and Imports (US$ billion). 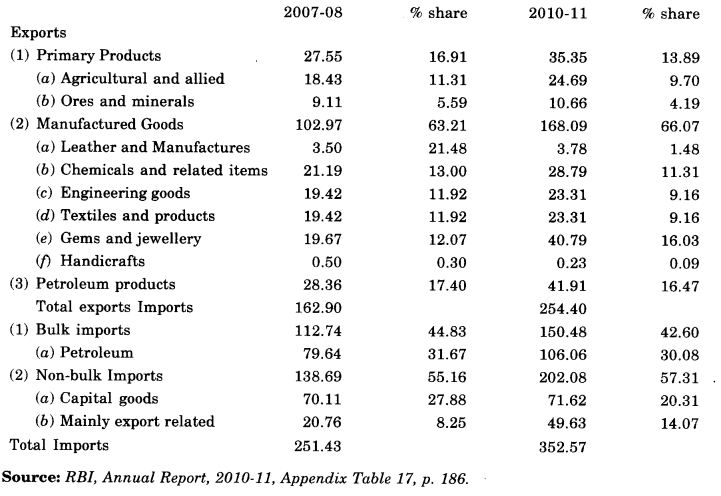