Question.2. What is seeding? [CBSE 2013,2011]
Answer. Seeding is given to some special teams or those teams which are winners/runners up of the last year’s tournament. In seeding, the strong teams are selected to keep them at appropriate places in the fixtures so that they should not meet in the earlier rounds.

Question.7. What is bye?
Answer. Bye is a privilege given to a team, generally by drawing lots, exempting it from playing a match in the first round.

Question.9. What do you mean by extramural?
Answer. Extramural means ‘between institutions’ or we can say that these competitions are conducted between the players of two or more institutions.

Question.10. What is planning?
Or
What do you mean by planning in sports?
Answer. Planning is a process of development of a strategy to achieve desired objectives, to solve problems and to facilitate action. Planning covers all the aspects of any tournament.

Question.17. Draw the fixtures of 7-teams on knock-out basis.
Answer. 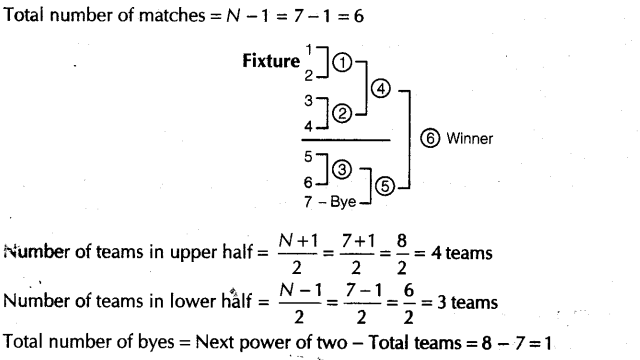 Question.19. Explain the staircase method of a league tournament for 7 teams.
Answer. In staircase method, fixtures are made just Tike a ladder or staircasev This method is the easiest method because no bye is given to any team and there is no need of the stipulation of odd or even number of teams.

5 Marks Questions:
Question.21. What do you mean by knock-out tournament? Draw the fixture of 21 teams on knock-out basis. [CBSE2013]
Answer. In this type of tournament, the team which is defeated once gets eliminated immediately and will not be given another chance to play. The total number of matches to played in this tournament will be equal to the number of teams participating minus one (N -1) e.g. if 21 teams are participating, the total number matches will be 21-1 =20.

So, knock-out or elimination tournament for 21 teams will be 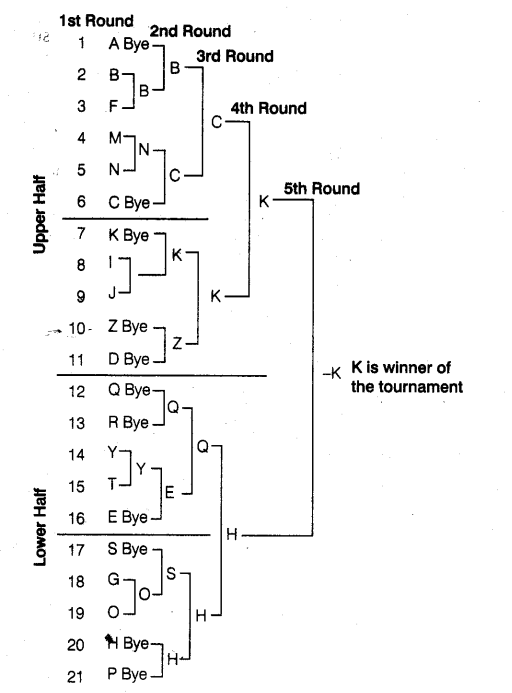 Question.23. What is a league tournament? Draw a fixture of 6 teams using round robin method.  [CBSE 2012]
Answer. In this type of tournament, there is sufficient time to complete the tournament. In this, players or  teams play against every other player or team.
There are two types of league tournaments
(i) Single league (ii) Double league
Fixture of 6 Teams There are three methods of drawing a fixture. We will show the cyclic method.
Cyclic Method Number of teams

There are two types of combination tournament: 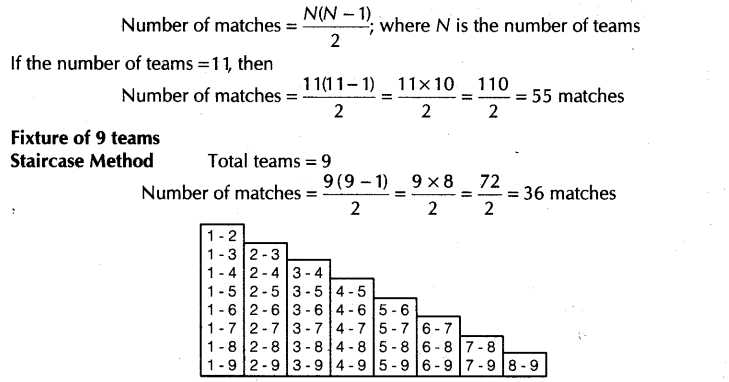 Question.27. What do you mean by a specific sports programme ? Explain Health Run and Run for Awareness.
Answer. Specific sports programmes are arranged in India and other countries to promote sports and games. These programmes create a feeling for taking part in sports and games. Students also become conscious that they must try to remain fit and healthy.
In most countries, sports programmes are often organised to keep the people aware about their health and to take part in sports activities.
Health Run To make people health conscious, health runs are organised in most places in India and other countries to make people aware, of deadly diseases like AIDS, Cancer, Tuberculosis, Dengue, Diabetes, Swine flu, Jaundice, Polio, Whooping cough etc. Health runs organised by World Health Organisation (WHO) lay stress on eradication of deadly diseases from the World. Run for Awareness Run for awareness can be organised by educational institutions to create awareness in the students about sports and games, about health, about a particular disease, about studies, about environment, about pollution or some other topic. Such races should be well planned before organising them.

Question.28. What do you understand by intramural? What is its importance?
Answer. The word intramural is derived from the Latin words intra and muros, which means within walls. The teams compete within the walls of an institution e.g. inter-class tournament or inter-house tournament in a school.
Importance of Intramurals: