1.Why is it advised to use iodised salt in our diet ?
Answer. Iodine stimulates the thyroid gland to produce thyroxin hormone. Deficiency of this hormone results in the enlargement of the thyroid gland. This can lead to goitre.

3. What is synapse ? In a neuron cell how is an electrical impulse created and what is the role of synapse in this context ?
Answer. A synapse is the gap between the two neurons. Here the axon terminal of one neuron is in close proximity to the dendrite of the second neuron. When a nerve impulse reaches the knob like nerve ending of an axon, a tiny amount of a chemical substance is released in the synapse. This chemical substance is called as the neurotransmitter. At synapse the electrical signals converted into chemicals, that can easily cross over the gap and pass on to the next neurons where it again converted into electrical signals.

4. What is meant by reflex-action ? With the help of a labelled diagram trace the sequence of events which occur when we touch a hot object.
Answer.Stimulus: In the example above, the stimulus is the contact with the hot pot. This contact causes a nerve impulse that will travel to the spinal cord via the sensory neurons.
Sensory neurons: These neurons carry the nerve impulse to the spinal cord. Similar to the interneuron and motor neuron, sensory neurons receive incoming impulses at the dendrites. The impulses move away from the cell body along the axon to the synaptic terminal where the impulse is sent to the next interneuron with the help of a neurotransmitter (acetylcholine). Interneurons: The interneuron is also known as relay neuron. These neurons are fully contained in the central nervous system. The interneuron serves as the connection between the sensory neurons and the motor neurons. Synapse: The synapse is a tiny space between two neurons. When an impulse gets to the end of one neuron and has to be sent down to the next neuron, the synapse acts as a bridge. The signal arrives at the end of one neuron (close to the synapse) as an electrical signal, crosses the synapse as a chemical signal (with the help of a neurotransmitter known as acetylcholine released by the synaptic vesicles at the synaptic terminal) and continues as an electrical signal in the next neuron.
Motor neurons: These neurons send nerve impulses away from the central nervous system to effector organs or muscle fiber in our example above. This causes the muscle fiber to contract, resulting in you snatching your hand away from the hot pot. 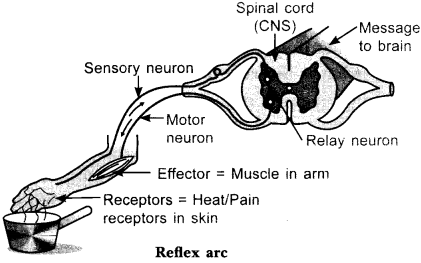 Response: To respond to the stimulus of the reflex arc, the muscle needs to contract to pull the hand quickly away from the hot pot. For this to happen, the impulse travels to the synaptic terminal of the motor neuron. Synaptic vesicles at the synaptic . terminal will then release acetylcholine which will cross the synapse and bind to the receptors on the muscle fibers to trigger the muscle contraction known as the â€˜response’.

6.(i) Name the hormones that are released in human males and females when they reach puberty.
(ii) Name a gland associated with brain. Which problem is caused due to the deficiency of the hormone released by this gland ?
Answer.
(i) Testes in males produces hormone testosterone.
Ovaries in females produces hormone oestrogen.
(ii)Pituitary gland present in the brain is responsible for body growth, development of bones and muscles (if excess-gigantism) (if less-dwarfism).

7. Draw neat diagram of human brain and label on it the following parts :
(i) Midbrain (ii) Pituitary gland
Answer. 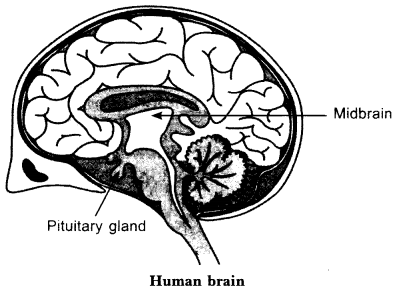 9.(a) Name the hormone which is released into the blood when its sugar level  rises. Explain the need of Chemical communication in multicellular organisms the organ which produces this hormone and its effect on blood sugar level. Also mention the digestive enzymes secreted by this organ with one function of each.
(b) Explain the need of Chemical communication in multicellular organisms.
Answer.
(a) Glucose is needed by cells for respiration. It is important that the concentration of glucose in the blood is maintained at a constant level. Insulin is a hormone produced by the a-cells that regulates glucose levels in the blood.
In order for multicellular organisms to function properly, their cells must communicate. For instance, your muscles must contract when your brain sends a message to contract.
Pancreas produces insulin and p-cells which increase glucose in blood. It also – produces digestive enzyme (pancreatic amylase).
(b) Cell-to-cell signaling is a critical component of coordinating cellular activities. Through this communication, messages are carried from signaling cells to receiving cells, also known as target cells. This signaling occurs with proteins and other types of signaling molecules. Other things which happens in our body due to cell communication are – growth and development, cellular reproduction, tissue repair, sensing pain, etc.

The functions of the neuron are:
(a) Passing of information takes place-
(i) By electric impulse (inside the neuron) and
(ii) In the form of chemicals (At synapse)
(b) Reflex action- spontaneous, involuntary and automatic response to a stimulus to protect us from harmful situations. For example, on touching a hot object unknowingly we instantly withdraw our hand.

12.(a) Explain any three directional movements in plants.
(b) How brain and spinal cord are protected in human ?
(c) Name the master gland present in the brain.
Answer.
(a) Stimuli is responsible for the movement of the plant parts towards or away from it. This movement is called as Tropic Movement.
Phototropism: movement of plant towards or away from the light. Geotropism: movement of plant parts towards the earth or away from it. Hydrotropism: movement of plant parts towards or away from any source of water.
(b) Both the brain and the spinal cord are protected by bone: the brain by the bones of the skull and the spinal cord is protected by a set of ring-shaped bones called vertebrae. They are both cushioned by layers of membranes called meninges as well as a special fluid called cerebrospinal fluid. This fluid helps to protect the nerve tissue to keep it healthy, and remove waste products.
(c) Pituitary gland present in the brain is known as the master gland.

16. Smita’s father has been advised by a doctor to reduce his sugar intake.

18.(a) How is brain protected from injury and shock?
(b) Name two main parts of hind brain and state the functions of each.
Answer.
(a) Brain is covered by a three layered membrane called meninges. In between the layers of meninges and brain, cavity fluid named Cerebro Spinal Fluid (CSF) is filled. The hard skull covers the meninges.  Thus Meninges, CSF and Skull protects our brain for a certain extent.
(b) Two main parts of hind-brain are â€” Medulla and Cerebellum. Their functions are:
Medulla : Involuntary actions such as blood pressure, salivation and vomiting.
Cerebellum : It is responsible for precision of voluntary actions and maintaining the posture and balance of the body.

19.(a) Draw the structure of neuron and label cell body and axon.
(b) Name the part of neuron:
(i) where information is acquired
(ii) through which information travels as an electrical impulse.
Answer.

22.(a) Explain how auxins help in bending of plant stem towards light.
(b) State the objective of the experiment for which experimental set-up is shown in the given diagram.
Answer.
(a) In plant shoots, the role of auxin is to cause a positive phototropism, i.e. to grow the plant towards the light. When light is incident on a plant from one direction, it causes the auxins to redistribute towards the shaded side of the plant. One function of auxin is to cause cell elongation. The redistribution causes the cells on the shaded side to elongate more than those on the side with the light shining on them. This causes the shoot to bend towards the light.
(b) The objective of the experiment is to show phototropic movement of plant.

26. What is chemotropism? Give one example. Name any two plant hormones and mention their functions.
Answer.  Chemotropism is the movement of a part of the plant in response to a chemical stimulus. It can be positive chemotropism or negative chemotropism. Example: The growth of pollen tube towards a chemical which is produced by an ovule during the process of fertilisation in a flower.
Two plant hormones with their functions are as follows:
Auxins promote cell elongation, root formation, cell division, respiration and other physiological processes like protein synthesis, etc.
Gibberellins stimulate stem elongation, seed germination and flowering.

29. What are ‘hormones’? State one function of each of the following hormones:
(i) Thyroxine (ii) Insulin
Answer. Hormones are the chemical substances which coordinate and control the activities of living organisms and also their growth. The term hormone was introduced by Bayliss and Starling.
(i) Function of Thyroxine: This hormone regulates the metabolism of carbohydrates and fats.
(ii) Function of insulin: This hormone helps in regulating sugar level in the blood.

30. What is the function of receptors in our body? Think of situation where receptors do not work properly. What problems are likely to arise?
Answer. Receptors are present in our all parts of the body for example in skin, eye, nose tongue etc. They detect the signals and then send them to brain in the form of electrical signals. If these receptors are damaged then it they will not detect the input which leads to the harm for our body in dangerous situation.

31. How is the spinal cord protected in the human body?
Answer.Spinal cord is enclosed in a bony cage called vertebral column.

32. A potted plant is made to lie horizontally on the ground. Which part of the plant will show
(i) positive geotropism?
(ii) negative geotropism?
Answer.
(i) Root (ii) Shoot.

33. Mention the function of the hind-brain in humans.
Answer.Hind brain controls respiration, cardio-vascular reflexes and gastric secretions.
It also modulates the motor commands initiated by the cerebrum.

34. Mention the function of adrenaline hormone.
Answer. Adrenaline hormone is released into the blood from the adrenal gland during stimulation of the nervous system on seeing any adverse situation of fight or fright, it:

38.What is a reflex action? Describe the steps involved in a reflex action.
Answer.
Reflex action: Jt is defined as an unconscious, automatic and involuntary response of effectors, i.e. muscles and glands, to a stimulus, which is monitored through the spinal cord.
Mechanism of reflex action : It involves the following steps:

39.List the components of reflex arc in correct sequence. State in brief the role of brain in reflex action.
Answer. The reflex arc pathway is shown in the flow chart as follows:
The Reflex arc does not involve brain. It minimises the overloading of brain. 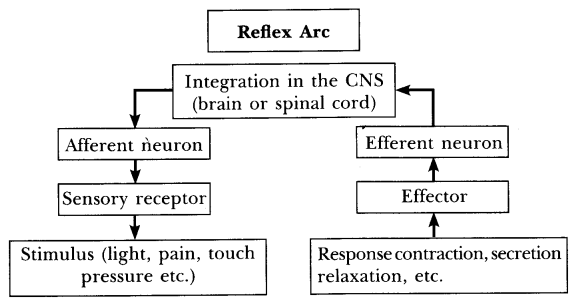 40. A young green plant receives sunlight from one direction only. What will happen to its shoots ?
Answer. Shoots will bend towards the light and roots away from the light.

42. What is the function of thyroxine hormone in our body ? jlMluK r
Answer. Thyroxine hormone regulates the carbohydrate, protein and fat metabolism in the body so as to provide the best growth balance.

47. What are plant hormones? Write two important functions of auxin.
Answer. Plant hormones can be defined as a chemical substance which is produced naturally in plants and are capable of translocation and regulating one or more physiological processes when present in low concentration. .
Two important functions of auxin are that it promotes cell elongation, root formation, cell division, etc.