5. World’s most problematic aquatic weed is
(a) Azolla (b) Wolffia (c) Eichhomia (d) Trapa
Answer. (c) The world’s most problematic aquatic weed is water hyacinth (Eichhornia crassipes) also called Terror of Bengal. It were introduced into India for their lovely flowers (mauve coloured) and shape of leaves. They grow abundantly in eutrophic (nutrient rich) water bodies. Eichhornia caused havoc by their excessive growth by causing blocks in our water ways and lead to an imbalance in the ecosystem dynamics of the water body. They grow faster than our ability to remove them.

6. Which of the following causes biomagnification?
(a) SO2 (b) Mercury
(c) DDT (d) Both (b) and (c)
Answer. (d) Biomagnification refers to increase in concentration of the toxicant at successive trophic level. This phenomenon is well known for DDT and Hg. In an aquatic food chain concentration of DDT is 0.003 ppb (parts per billion) in water but it can ultimately reaches 25 ppm in fish eating birds through biomagnification. Highest DDT deposition shall occur in birds or sea gull. High concentration of DDT disturb calcium metabolism in birds which causes:
1. Thining of egg shell.
2. Their premature breaking of egg shell.
Thus eventually causing decline in bird population.

8. Which of the following material takes the longest time for biodegradation?
(a) Cotton (b) Paper (c) Bone (d) Jute
Answer. (c)

9. Choose the incorrect statement.
(a) The Montreal protocol is associated with the control of emission of ozone depleting substances
(b) Methane and carbon dioxide are greenhouse gases
(c) Dobson units are used to measure oxygen content
(d) Use of incinerators is crucial to disposal of hospital wastes
Answer. (c) The thickness of ozone is measured in terms of Dobson Units (DU). In stratosphere ozone gas is continuously-formed by the action of ultra violet rays on molecular oxygen & also degraded into molecular oxygen.

12. The loudness of a sound that a person can withstand without discomfort is about
(a) 150 dB (b) 215 dB (c) 30 dB (d) 80 dB
Answer. (d) Green muffler is related to pollution of noise. Noise pollution is measured in decibels (dB). Intensity level of whispering sound is 20-40 dB. Intensity of sound in normal conservation 30-60 dB. Day time sound level in silent zone is 50 dB. Noise become uncomfortable above 80 dB. Sound become hazardous noise pollution at level above 80 dB.

14. Match correctly the following and choose the correct option:

18. Which one of the following diseases is not due to contamination of water?
(a) Hepatitis-B (b) Jaundice (c) Cholera (d) Typhoid
Answer. (a) Sewage from our homes as well as from hospitals are likely to contain many undesirable pathogenic micro-organisms and its disposal into a water without proper treatment may cause outbreak of serious diseases such as:
1. Dysentry, 2. Typhoid, 3. Jaundice, 4. Cholera

21. Match the items in column 1 and column II and choose the correct option:

Very Short Answer Type Questions
1. Use of lead-free petrol or diesel is recommended to reduce the pollutants emitted by automobiles. What role does lead play?
Answer. Anti knocking agent

2. In which year was the Air (Prevention and Control of Pollution) Act amended to include noise as air pollution?
Answer. 1987.

3. Name the city in our country where the entire public road transport runs on CNG.
Answer. Delhi.

4. It is a common practice to undertake desilting of the overhead water tanks. What is the possible source of silt that gets deposited in the water tanks?
Answer. The soil particles carried by water from the source of supply.

5. What is cultural eutrophication?
Answer. Pollutants from man’s activities like effluents from the industries and homes can radically accelerate the aging process. This phenomenon has been called Cultural or Accelerated Eutrophication.

7. What is the raw material for polyblcnd?
Answer. Plastic waste.

9. Mention any two examples of plants used as wind breakers in the agricultural fields.
Answer. Acacia and Neem.

10. Name an industry which can cause both air and thermal pollution and as well as eutrophication.
Answer. Fertiliser factory.

11. What is an algal bloom?
Answer. Presence of large amounts of nutrients in waters causes excessive growth of planktonic (free-floating) algae, called an algal bloom.

12. What do you understand by biomagnification?
Answer. Biomagnification refers to increase in concentration of the toxicant at successive trophic levels.

14. What is reforestation?
Answer. Reforestation is the process of restoring a forest that once existed but was removed at some point of time in the past.

15. What is the best solution for the treatment of electronic wastes?
Answer. Recycling.

2. What is hybrid vehicle technology? Explain its advantages with a suitable example?
Answer. Vehicles running on dual mode like petrol and CNG are hybrid vehicle. As CNG is a green fuel there is conservation of fossil fuels and reduction in the environmental pollution.

4. Name any one greenhouse gas and its possible source of production on a large scale. What are the harmful effects of it?
Answer. CO2 and Methane. CO2 levels are increasing due to burning of fossil fuels, leading to Global Warming.

7. How can slash and bum agriculture become environment friendly?
Answer. Slash and bum agriculture, commonly called as Jhum cultivation in the north-eastern states of India, has also contributed to deforestation. In slash and bum agriculture, the farmers cut down the trees of the forest and bum the plant remains. The ash is used as a fertilizer and the land is then used for farming or cattle grazing. After cultivation, the area is left for several years so as to allow its recovery. The farmers then move on to other areas and repeat this process. In earlier days, when Jhum cultivation was in prevalence, enough time-gap was given such that the land recovered from the effect of cultivation. With increasing population, and Treated cultivation, this recovery phase is done away with, resulting in deforestation.

8. What is the main idea behind “Joint Foregt Management Concept”introduced by the Government of India?
Answer. Realising the significance of participation by local communities, the Government of India in 1980s has introduced the concept of Joint Forest Management (JFM) so as to work closely with “the local communities for protecting and managing forests. In return for their services to the forest, the communities get benefit of various forest products (e.g., fruits, gum, rubber, medicine, etc.), and thus the forest can be conserved in a sustainable manner.

9. What do you understand by Snow-blindness?
Answer. In human eye, cornea absorbs UV-B radiation, and a high dose of UV-B causes inflammation of cornea, called snow-blindness.

11. Observe the figure A and B given below and answer the following questions

(i) The power generation by the above two methods is non-polluting. True/False
(ii) List any two applications of solar energy.
(iii) What is a photovoltaic cell?
Answer. (i) True.
(ii) (a) Electricity generation (b) Solar light
(iii) A photovoltaic cell is a semiconductor diode that converts visible light into direct current (DC).

2. What is organic farming? Discuss the benefits of organic fanning as a viable practise in the context of developing nations like India.
Answer. The use of Biofertilisers in agriculture is called organic farming. Biofertilisers are organisms that enrich the nutrient quality of the soil. The main sources of biofertilisers are bacteria, fungi and cyanobacteria. The nodules on the roots of leguminous plants formed by the symbiotic association of Rhizobium. These bacteria fix atmospheric nitrogen into organic forms, which is used by the plant as nutrient. Other bacteria can fix atmospheric nitrogen while free- living in the soil (examples Azospirillum and Azotobacter), thus enriching the nitrogen content of the soil.
Currently, in our country, a number of biofertilisers are available commercially in the market and farmers use these regularly in their fields to replenish soil nutrients and to reduce dependence on chemical fertilisers.

4. What are multipurpose trees? Give the botanical and local names of any two multipurpose trees known to you and list their uses.
Answer. Multipurpose trees are that which are grown for more than one purpose or benefits. They may provide food in the form of fruit, seeds, or roots; and also provides firewood, medicines, fibres, etc.
(i) Neem (Azadirachta indicd)â€” Used as insect repellent, antibiotic, firewood and windbreaks.
(ii) Coconut palm (Cocos nucifera)â€” Used for food, purified water (juice from inside the coconut), roof thatching, firewood, shade and rope making.

6. How does an electrostatic precipitator work?
Answer. Electrostatic precipitator has electrode wires that are maintained at several thousand volts, which produce a corona that releases electrons. These electrons attach to dust particles giving them a net negative charge. The collecting plates are grounded and attract the charged dust particles. The velocity of air between the plates must be low enough to allow the dust to fall. 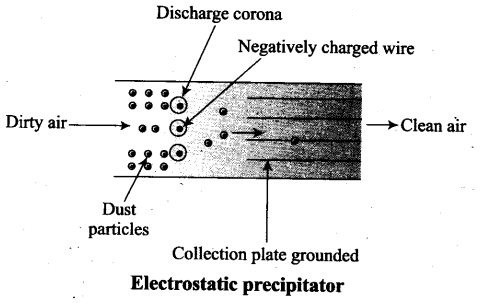 7. Observe figure and answer the followiag,questions.
(i) What ecological term is used to describe the DDT accumulation at different trophic levels?
(ii) list any one effect of DDT accumulation on birds.
(iii) Will DDT accumulation lead to eutrophication?
Does it affect the BOD?
Name disease caused by accumulation of any heavy metal.
Answer. (i) Biomagnification
(ii) High concentrations of DDT disturb, calcium metabolism in birds, which causes thinning of eggshell and their premature breaking, eventually causing decline in bird populations.
(iii) Yes.
(iv) Yes, it increases the BOD.
(v) Disease caused by eating fish found in water contaminated with industrial waste having mercury is Minamata disease. Cd pollution associated with disease is called “Itai-Itai”. Arsenic (As) poisoning causes “Black foot disease”.