Multiple Choice Questions
Single Correct Answer Type
Question.1. Choose the incorrect statement from the following:
(a) In birds and mammals internal fertilisation takes place.
(b) Colostrum contains antibodies and nutrients.
(c) Polyspermy in mammals is prevented by the chemical changes in the egg surface.
(d) In the human female implantation occurs almost seven days after fertilisation.
Answer. (c) During fertilisation, a sperm comes in contact with the zona pellucida layer of the ovum and induces changes in the membrane that block the entry of additional sperms. Thus, it ensures that only one sperm can fertilise an ovum.

Question.2. Identify the correct statement from the following:
(a) High levels of estrogen triggers the ovulatory’ surge
(b) Oogonial cells start to proliferate and give rise to functional ova in regular cycles from puberty onwards.
(c) Sperms released from seminiferous tubules are highly motile.
(d) Progesterone level is high during the post ovulatory phase of menstrual cycle.
Answer. (d)
• Rapid secretion of LH leading to its maximum level during the mid-cycle called LH surge.
• Oogenesis is initiated during the embryonic development stage when a couple of million gamete mother cells (oogonia) are formed within each fetal ovary (about third month of foetal ovary), no more oogonia are formed and added after birth.
• In the head of epididymis sperms undergo physiological maturation, acquiring increased motility and fertilizing capacity.

Question.4. Seminal plasma, the fluid part of semen, is contributed by
i. Seminal vesicle
ii. Prostate
iii. Urethra
iv. Bulbourethral gland
(a) i and ii (b) i, ii and iv
(c) ii, iii and iv (d) i and iv
Answer. (b) Secretion of seminal vesicle (paired), prostate gland (unpaired) and bulbourethral glands or Cowper’s glands (paired) constitute the seminal plasma which is rich in fructose, calcium and certain enzymes.

Question.5. Spermiation is the process of the release of sperms from
(a) Seminiferous tubules (b) Vas deferens
(c) Epididymis (d) Prostate gland
Answer. (a)

Question.7. Acrosomal reaction of the sperm occurs due to
(a) Its contact with zona pellucida of the ova
(b) Reactions within the uterine environment of the female
(c) Reactions within the epididymal environment of the male
(d) Androgens produced in the uterus
Answer. (a) Acrosome reaction in sperm is triggered by release of fertilizin. The secretions of the acrosome help the sperm enter into the cytoplasm of the ovum through the zona pellucida and the plasma membrane.

Question.10. Match between the following representing parts of the sperm and their functions and choose the correct option.

Question.12. Match the following and choose the correct options:

Question.18. Identify the odd one from the following:
(a) Labia minora (b) Fimbriae
(c) Infundibulum (d) Isthmus ,
Answer. (a) Fimbriae, infundibulumâ€˜isthmus and ampulla are the part of fallopian duct while labia minora is female external genitalia.

Question.2. The path of sperm transport is given below. Provide the missing.steps in blank boxes.

Question.3. What is the role of cervix in the human female reproductive system?
Answer. Cervix helps in regulating the passage of sperms into the uterus and forms the birth canal to facilitate parturition.

Question.4. Why are menstrual cycles absent during pregnancy?
Answer. The high levels of progesterone and estrogens during pregnancy suppress the gonadotropins which is required for the development of new follicles. Therefore, a new cycle cannot be initiated.

Question.5. Female reproductive organs and associated functions are given below in column A and B. Fill in the blank boxes.

Question.7. What is the significance of epididymis in male fertility?
Answer. In the epididymis sperms undergo physiological maturation, acquiring increased motility and fertilizing capacity.

Question.9. The mother germ cells are transformed into a mature follicle through series of steps. Provide the missing steps in the blank boxes.

Question.10. During reproduction, the chromosome number (2n) reduces to half (n) in the gametes and again the original number (2n) is restored in the offspring. What are the processes through which these events take place?
Answer. Halving of chromosomal number takes place during gametogenesis and regaining the 2n number occur as a result of fertilisation.

Question.11. What is the difference between a primary oocyte and a secondary oocyte?
Answer.

Question.13. How does zona pellucida of ovum help in preventing polyspermy?
Answer. Polyspermy means an egg has been fertilized by more than one sperms. The zona pellucida is modified by proteases. The proteases destroy the protein link between the cell membrane and the vitelline membrane, remove any receptors that other sperm have bound to, and help to form the fertilization membrane that prevents polyspermy.

Question.14. Mention the importance of LH surge during menstrual cycle.
Answer. LH surge is essential for the events leading to ovulation.

Short Answer Type Questions
Question.1. A human female experiences two major changes, menarche and menopause during her life. Mention the significance of both the events.
Answer. Menarche represents the beginning of menstrual cycle which is an indication of attainment of sexual maturity. Menopause, on the other hand, refers to the cessation of menstruation which in turn means stoppage of gamete production, i.e., it marks the end of reproductive/ fertile life of the female.

Question.3. Corpus luteum in pregnancy has a long life. However, if fertilisation does not take place, it remains active only for 10-12 days. Explain.
Answer. This is because of a neural signal given by the maternal endometrium to its hypothalamus in presence of a zygote to sustain the gonadotropin (LH) secretion, so as to maintain the corpus luteum as long as the embryo remains there. In the absence of a zygote, therefore, the corpus luteum cannot be maintained longer.

Question.4. What is foetal ejection reflex? Explain how it leads to parturition.
Answer. Vigorous contraction of the uterus at the end of the pregnancy causes expulsion/delivery of the foetus. This process of delivery of the foetus (childbirth) is called parturition. .
• Parturition is induced by a complex neuroendocrine mechanism. The signals for parturition originate from the fully developed foetus and the placenta which induce mild uterine contractions called foetal ejection reflex. This triggers release of oxytocin from the maternal pituitary. Oxytocin acts on the uterine muscle and causes stronger uterine contractions, which in turn stimulates further secretion of oxytocin.
• The stimulatory reflex between the uterine contraction and oxytocin secretion continues resulting in stronger and stronger contractions. This leads to expulsion of the baby out of the uterus through the birth canal- parturition. Soon after the infant is delivered, the placenta is also expelled out of the uterus.

Question.5. Except endocrine function, what are the other functions of placenta?
Answer. Placenta facilitates the supply of oxygen and nutrients to the embryo. It also removes C02 and excretory wastes produced by embryo.

Question.6. Why doctors recommend breast feeding during initial period of infant growth?
Answer. The mammary glands of the female undergo differentiation during pregnancy and starts producing milk towards the end of pregnancy by the process called lactation.
The milk produced during the initial few days of lactation is called colostrum which contains several antibodies absolutely essential to develop resistance for the new bom babies. Breast-feeding during the initial period of infant growth is recommended by doctors for bringing up a healthy baby.

Question.7. What are the events that take place in the ovary and uterus during follicular phase of the menstrual cycle?
Answer. 1. The primary follicle .grows and becomes fully mature graafian follicles.
2. Secretion of estrogen hormone.
3. Endometrium of uterus regenerates through proliferation.

Question.8. Given below is a flow chart showing ovarian changes during menstrual cycle. Fill in the spaces giving the name of the hormones responsible for the events shown. 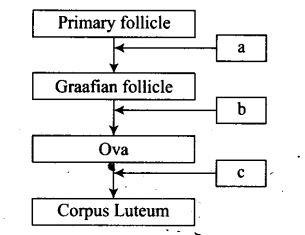 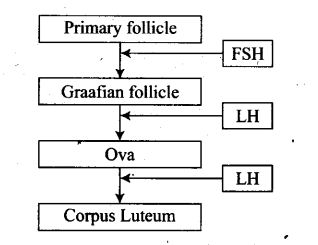 Question.9. Give a schematic labelled diagram to represent oogenesis (without descriptions).
Answer. 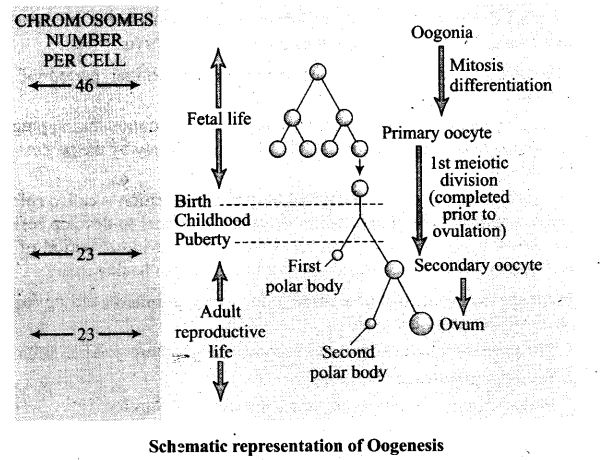 Question.10. What are the changes in the oogonia during the transition of a primary follicle to Graafian follicle?
Answer. Oogenesis is initiated during the embryonic development stage when a couple of million gamete mother cells (oogonia) are formed within each fetal ovary (about third month of foetal ovary), no more oogonia are formed and added after birth.
• These cells start division and enter into prophase-I of the meiotic division and get temporarily arrested at that stage, called primary oocytes. Each primary oocyte then gets surrounded by a layer of granulosa cells and then called the primary follicle. 1 ° follicle contains 1 ° oocyte. A large number of these follicles degenerate during the phase from birth to puberty.
• The primary follicles get surrounded by more layers of granulosa cells and a new theca and called secondary follicles. The theca layer is organised into an inner theca interna and an outer theca externa. Theca interna secretes estrogen hormone. The secondary follicle soon transforms into a tertiary follicle which is characterised by a fluid filled cavity called antrum.
• It is important to draw your attention that it is at this stage that the primary oocyte within the tertiary follicle grows in size and completes its first meiotic division. It is an unequal division resulting in the formation of a large haploid secondary oocyte and a tiny first polar body. The tertiary follicle further changes into the mature follicle or Graafian follicle.

Long Answer Type Questions
Question.1. What role does pituitary gonadotropins play during follicular and ovulatory phases of menstrual cycle? Explain the shifts in steroidal secretions.
Answer. Menstrual cycle is regulated by hypothalamus through the pituitary gland. At the end of menstrual phase, the pituitary FSH gradually increases resulting in follicular development within the ovaries. As the follicles mature, Estrogen secretion increases resulting in a surge in (FSHe and LH).The surge of LH responsible for ovulation. LH also induces luteinisation. This leading to the formation of corpus luteum. Corpus luteum secretes progesterone and some estrogen which help in maintaining the uterine endometrium for implantation.

Question.2. Meiotic division during oogenesis is different from that in spermatogenesis. Explain how and why?
Answer. Unequal cytoplasmic division of the oocyte is to ensure the retention of bulk of cytoplasm in one cell, instead of sharing with two. It has to provide nourishment for the developing embryo during early stages, so it is essential to retain as much cytoplasmic materials it could in a single daughter cell.

Question.3. The zygote passes through several developmental stages till implantation, Describe each stage briefly with suitable diagrams.
Answer. The mitotic division starts as the zygote moves through the isthmus of the oviduct called cleavage towards the uterus and forms 2, 4, 8, 16 daughter cells called blastomeres. The embryo with 8 to 16 blastomeres is called a morula. The morula continues to divide and transforms into blastocysts, it moves further into the uterus. 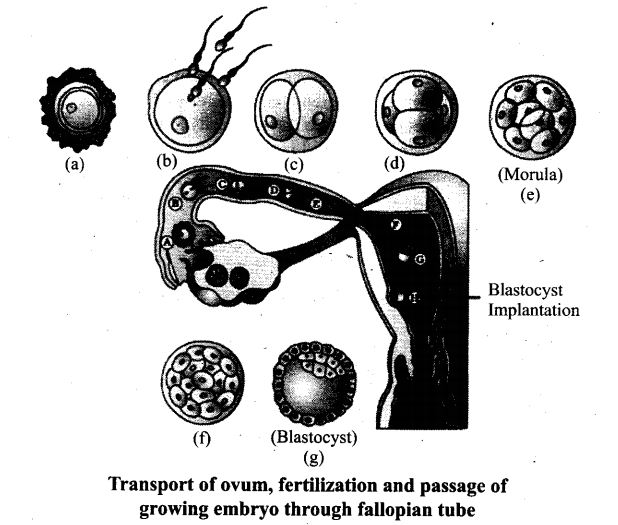 Question.4. Draw a neat diagram of the female reproductive system and label the parts associated with the following: (a) production of gametes, (b) site of fertilization (c) site of implantation and (d) birth canal.
Answer. 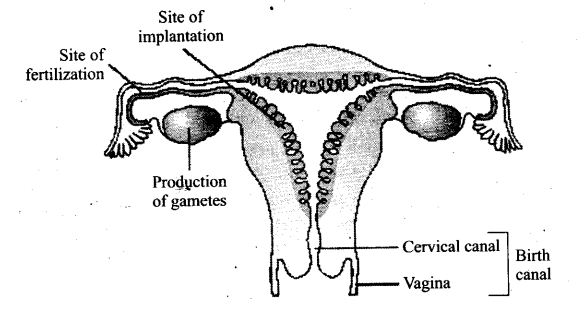 Question.5. With a suitable diagram, describe the organisation of mammary gland.
Answer. A functional mammary gland is characteristic of all female mammals. The mammary glands are paired structures (breasts) that contain glandular tissue and variable amount of fat. The glandular tissue of each breast is divided into 15â€”20 mammary lobes containing clusters of cells called alveoli. The cells of alveoli secrete milk, which is stored in the cavities (lumens) of alveoli. 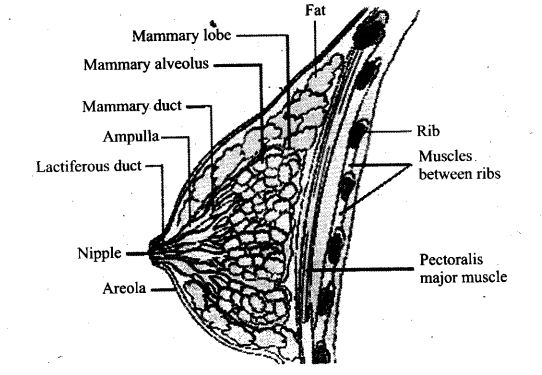