13. What parameters are used for tiger census in our country’s national parks and sanctuaries?
(a) Pug marks only (b) Pug marks and faecal pellets .
(c) Faecal pellets only (d) Actual head counts
Answer. (b) Sometimes population size is indirectly estimated without actually counting them or seeing them. E.g. ; The tiger census in our National Parks and Tiger Reserves is often based on pug marks and faceal pellets. 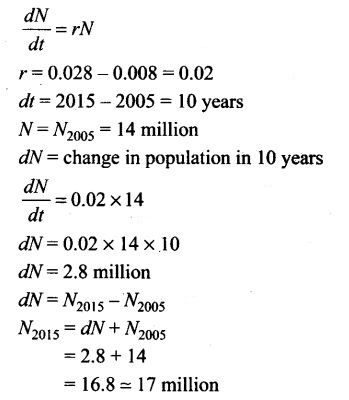 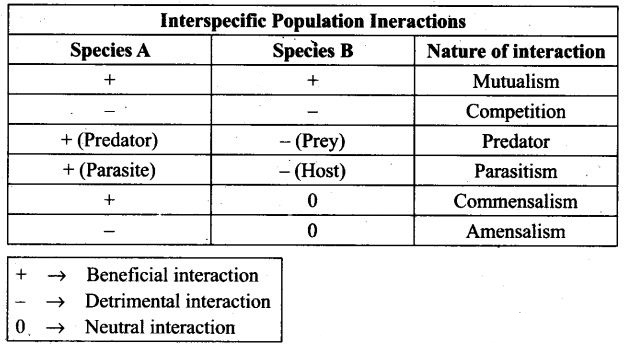 2. What are Eurythermic species?
Answer. Species that tolerate wide range of temperature are called Eurythermic . species.

3. Species that can tolerate wide range of salinity are called .
Answer. Euryhaline

5. What is the interaction between two species called?
Answer. Interspecific interaction

6. What is commensalism?
Answer. Commensalism is the interaction in which one species benefits and the other is neither harmed nor benefited.

7. Name the association in which one species produces poisonous substance or a change in environmental conditions that is harmful to another species.
Answer. Amensalism

8. What is Mycorrhiza?
Answer. Mycorrhiza is a symbiotic association between a fungus and the roots of higher plants.

9. Emergent land plants that can tolerate the salinities of the sea are called
Answer. Mangroves

12. Define aestivation.
Answer. Aestivation is a state of dormancy characterized by inactivity and a lowered metabolic rate in response to high temperatures and arid conditions.

13. What is diapause and its significance?
Answer. Under unfavourable conditions many zooplankton species in lakes and ponds are known to enter diapause, a stage of suspended development.

14. What would be the growth rate pattern, when the resources are unlimited?
Answer. Exponential.

15. What are the organisms that feed on plant sap and other plant parts called?
Answer. Phytophagous

17. Give a suitable example for commensalism.
Answer. Cattle egret and grazing cattle.

18. Define ectoparasite and endoparasite, and give suitable examples.
Answer.

19. What is brood parasitism? Explain with the help of an example.
Answer. Brood parasitism in birds is a fascinating example of parasitism in which the parasitic bird lays its eggs in the nest of its host and let the host incubate them. During the course of evolution, the eggs of the parasitic bird have evolved to resemble the host’s egg in size and colour to reduce the chances of the host bird detecting the foreign eggs and ejecting them from the nest.

Short Answer Type Questions
1. Why are coral reefs not found in the regions from. West Bengal to Andhra Pradesh but are found in Tamil Nadu and on the east coast of India?
Answer. High salinity, optimal temperature and less siltation are essential to colonise corals. If siltation and fresh water inflow are very high, the corals don’t colonise. In contrast when the siltation and fresh water inflow by the rivers are very less, the coral do colonise.

4. Define heliophytes and sciophytes. Name a plant from your locality that is either heliophyte or sciophyte.
Answer.

6. In a sea shore, the benthic animals live in sandy, muddy and rocky substrata
and accordingly developed the following adaptations.
a. Burrowing
b. Building cubes
c. Holdfasts/peduncle
Find the suitable substratum against each adaptation.
Answer. a. Sandy, b. Muddy, c. Rocky

7. Categorise the following plants into hydrophytes, halophytes, mesophytes and xerophytes. Give reasons for your answers.
a. Salvinia b. Opuntia
c. Rhizophora d. Mangifera
Answer. a. Hydrophyte, b. Xerophyte, c. Halophyte, d. Mesophyte

8. In a pond, we see plants which are free-floating; rooted-submerged; footed emergent; rooted with floating leaves. Write the type of plants against each of them.

11. In an association of two animal species, one is a termite which feeds on wood and the other is a protozoan Trichonympha present in the gut of the termite. What type of association they establish?
Answer. They shows mutualism.

12. Lianas are vascular plants rooted in the ground and maintain erectness of their stem by making use of other trees for support. They do not maintain direct relation with those trees. Discuss the type of association the lianas have with the trees.
Answer. This association is called commensalism.

14. What is a tree line?
Answer. When we go up the altitude, beyond a particular height no trees are found and the vegetation comprises only of shrubs and herbs. The altitude beyond which no tree is seen is known as tree line.

19. Observe the set of 4 figures A, B, C and D, and answer the following questions: •
(i) Which one of the figures shows mutualism?
(ii) What kind of association is shown in D?
(iii) Name the organisms and the association in C.
(iv) What role is the insect performing in B? 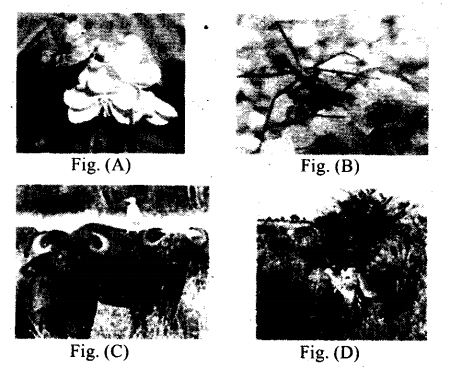 3. The following diagrams are the age pyramids of different populations. Comment on the status of these populations. 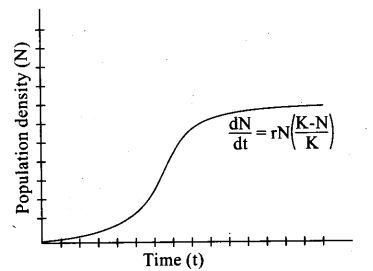 Answer. A population growing in a habitat with limited resources show initially a lag phase, followed by phases of acceleration and deceleration and finally an asymptote, when the population density reaches the carrying capacity. A’ plot of N in relation to time (t) results in a sigmoid curve. This type of population growth is called Verhulst-Pearl Logistic Growth and is described by the following equation: 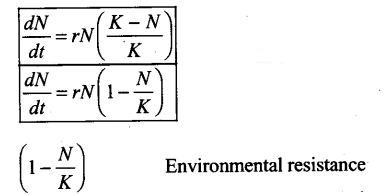 6. Discuss the various types of positive interactions between species.
Answer. Both the species benefit in mutualism. The interaction where one species is benefitted and the other is neither benefitted nor harmed is called commensalism.

7. In an aquarium two herbivorous species of fish are living together and feeding on phytoplanktons. As per the Gause’s Principle, one of the species is to be eliminated in due course of time, but both are surviving well in the aquarium. Give possible reasons.
Answer. Each species has a specific position or functional role within the community, called niche. According to the Gausse’s principle, no two species can live in the same niche. In this case, two herbivorous species are living in the same niche and feeding on phytoplanktons. It may be because of the availability of sufficient phytoplanktons and or less number of individuals of the fish species. Of the two species might have occurred and though neither of the species have been eliminated, niche overlapping may effect the growth and development of individuals of the species.

8. While living in and on the host species, the animal parasite has evolved certain adaptations. Describe these adaptations with examples.
Answer. In accordance with their life styles, parasites evolved special adaptations such as the loss of unnecessary sense organs, presence of adhesive organs or suckers to cling on to the host, loss of digestive system and high reproductive capacity. The life cycles of parasites are often complex, involving one or two intermediate hosts or vectors to facilitate parasitisation of its primary host.

10. Which element is responsible for causing soil salinity? At what concentration does the soil become saline?
Answer. Soil salinity is the salt content in the soil. Salts are a natural component in soils and water. The ions responsible for salination are: Na+, K+, Ca2+, Mg2+ and Cl–.

11. Does light factor affect the distribution of organisms? Write a brief note giving suitable examples of either plants or animals.
Answer. Since plants produce food through photosynthesis, a process which is only possible when sunlight is available as a source of energy, we can quickly understand the importance of light for living organisms, particularly autotrophs. Many species of small plants (herbs and shrubs) growing in forests are adapted to photosynthesise optimally under very low light conditions because they are constantly overshadowed by tall, canopied trees. Many plants are also dependent on sunlight to meet their photoperiodic requirement for flowering. For many animals too, light is important in that they use the diurnal and seasonal variations in light intensity and duration (photoperiod) as cues for timing their foraging, reproductive and migratory activities.