Single Correct Answer Type
Question 1. Addition of water to alkynes occurs in acidic medium and in the presence of Hg2+  ions as a catalyst. Which one of the following product will be formed on addition of water to but-l-yne under these conditions?

Question 2. Which of the following compounds is most reactive towards nucleophilic addition reactions?

Solution: (a) CH3CHO is most reactive towards nucleophilic addition reactions. Carbonyl compounds are polar with positive charge on carbon atom which is attacked by nucleophiles. Two electron releasing alkyl groups in ketones make carbon less electron deficient than aldehydes. Benzene ring exhibits + R-effect which thereby decreases the ease of nucleophilic addition reaction in benzaldehyde and acetophenone. Hence the reactivity order is

Solution: (b) C6H5OCOC6H5 can be prepared by the reaction of phenol and benzoyl chloride in the presence of pyridine.

Question 6. Cannizzaro’s reaction is not given by 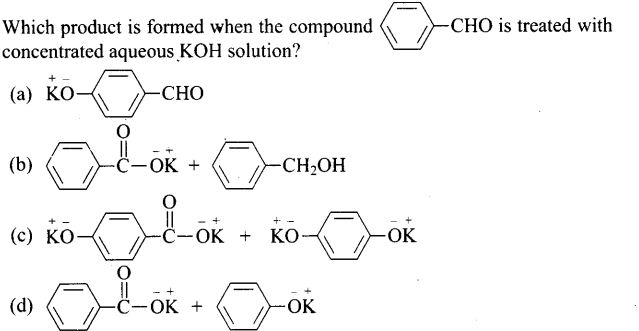 Solution: (b) Benzaldehyde is having no a hydrogen. So, on reaction with aqueous KOH solution, it undergoes Cannizzaro’s reaction. One molecule of aldehyde is reduced and other is

Question 9. Compounds A and C in the following reactions are

Question 10. Which is the most suitable reagent for the following conversion?

Question 13. Which of the following compounds do not undergo aldol condensation?

Question 18. Which of the following is the correct representation for intermediate of nucleophilic addition reaction to the given carbonyl compound (A):

Solution: (a, b) Since, carbonyl compound is a planar molecule hence two orientation of molecule regarding attack of nucleophile is possible as follows 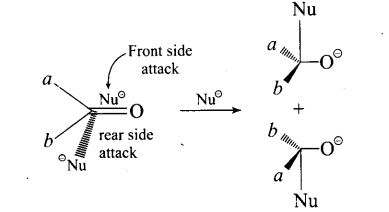 Since, the product contains a chiral carbon, therefore, attack of nucleophile can occur either from front side attack or rear side attack giving enantiomeric products.

Question 19. Why is there a large difference in the boiling points of butanal and butan-1 -ol?
Solution: Butan-1 -ol has higher boiling point (391 K) than butanal due to intermolecular
hydrogen bonding between -OH groups of alcohols.

Question 20. Write a test to differentiate between pentan-2-one and pentan-3-one.
Solution:

Question 21. Give the IUPAC names of the following compounds:

Question 22. Give the structure of the following compounds:
(a) 4-Nitropropiophenone
(b) 2-Hydroxycyclopentane + carbaldehyde
(c) Phenyl acetaldehyde
Solution:

Question 25. Name the electrophile produced in the reaction of benzene with benzoyl chloride in the presence of anhydrous AlCl3. Name of the reaction also.
Solution:

Question 27. Arrange the following in decreasing order of their acidic strength and give reason for your answer.
Solution: CH3CH2OH, CH3COOH, CICH2COOH, FCH2COOH, C6H5CH2COOH
FCH2COOH > ClCH2COOH > C6H5CH2COOH > CH3COOH > CH3CH2OH
[This is due to -I effect and acidic strength increases proportionately with the increase in electronegativity.
(i.e., F > Cl > C6H5 > H).
Further CH3COOH is much stronger acid than CH3CH2OH because CH3COO– ion that has left after the loss of proton is stabilised by resonance but CH3CH2O– does not.]

Question 28. What products will be formed on reaction of propanal with 2-methylpropanal in the presence of NaOH? Write the name of the reaction also.
Solution: 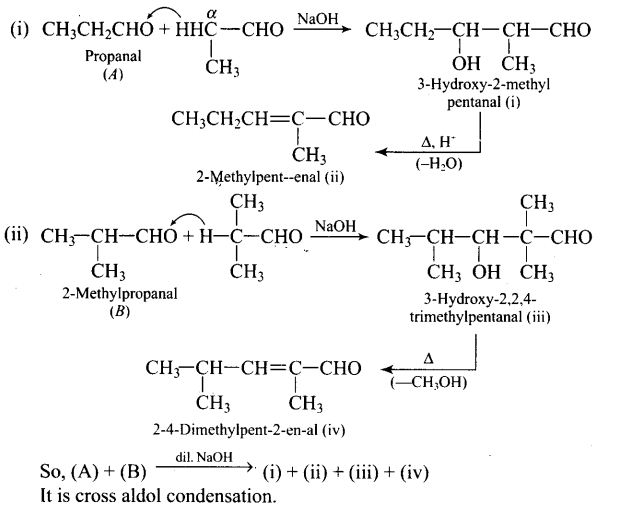 Question 32. Carboxylic acids contain carbonyl group but do not show the nucleophilic addition reaction like aldehydes or ketones. Why?
Solution: It is due to resonance as shown below. The partial positive charge on the carbonyl carbon atom is reduced

Similarly, a carbonyl group of aldehydes and ketones may be regarded as the resonance hybrid of the following structures.

Question 33. Identify the compounds A, B and C in the following reaction.

Question 34. Why are carboxylic acids more acidic than alcohols or phenols although all of them have hydrogen atom attached to an oxygen atom (-O-H)?
Solution: The aliphatic carboxylic acids are stronger acids than alcohols and phenols. The difference in the relative acidic strengths can be understood if we compare the resonance hybrids of carboxylate ion and ethoxide phenoxide ion.

Question 36. What happen when benzene diazonium chloride is heated with water?
Solution:

Question 41. Match the example given in Column I with the name of the reaction in Column II.

Question 48. An aromatic compound â€˜A’ (Molecular formula CgHgO) gives positive 2, 4-DNP test. It gives a yellow precipitate of compound â€˜B’ on treatment with iodine and sodium hydroxide solution. Compound â€˜A’ does not give Tollens or Fehling’s test. On drastic oxidation with potassium permanganate it forms a carboxylic acid â€˜C’ (Molecular formula C7H6O2), which is also formed along with the yellow compound in the above reaction. Identify A, B and C and write all reactions involved.
Solution: Molecular formula of compound is C8HgO. As â€˜A’ does not give Tollens’ or Fehling’s test. It must be a ketone. It gives positive test with 2, 4-DNP and iodoform test. It means it is methyl ketone. 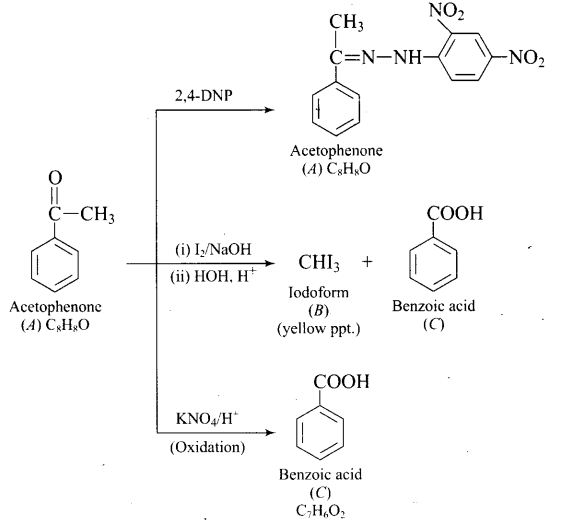 Question 49. Write down functional isomers of a carbonyl compound with molecular formula C3H6O. Which isomer will react faster with HCN and why? Explain the mechanism of the reaction also. Will the reaction lead to the completion with the conversion of whole reactant into product at reaction conditions? If a strong acid is added to the reaction mixture what will be the effect on concentration of the product and why?
Solution: C3H6O will have following isomer.

Compound I will react faster with HCN due to less steric hindrance and greater positive charge on carbon atom of carbonyl group. Two methyl groups increase electron density on carbonyl carbon in compounds II hence the rate of nucleophilic attack is less.
Mechanism of the reaction:

The reaction will not lead to completion since it is a reversible reaction, hence equilibrium is established.
If a strong acid is added to reaction mixture, the addition is inhibited because the formation of CN” ions form HCN is prevented.

Question 50. When liquid â€˜A’ is treated with a freshly prepared ammoniacal silver nitrate solution, it gives bright silver mirror. The liquid forms a white crystalline solid on treatment with sodium hydrogen sulphite. Liquid â€˜B’ also forms a white crystalline solid with sodium hydrogen sulphite but it does not give test with ammoniacal silver nitrate. Which of the two liquids is aldehyde? Write the chemical equations of these reactions also.
Solution: Liquid â€˜A’ forms a bright silver mirror on treatment with ammoniacal AgNO3 solution, therefore, liquid â€˜A’ is an aldehyde.
Liquid B does not give test with ammoniacal AgNO3 solution, therefore, liquid â€˜B’ must be a methyl ketone.