Single Correct Answer Type
Question 1. On addition of cone. H2SO4 to a chloride salt, colourless fumes are evolved but in case of iodide salt, violet fumes come out. This is because

Solution: (c) HI formed during reaction is oxidized to I2 which is violet in colour.

Solution: (b) Black precipitate of copper sulphide is formed which gives blue colour of copper nitrate on boiling with dilute HNO3. When aqueous solution of ammonia is added to it, deep blue colour of 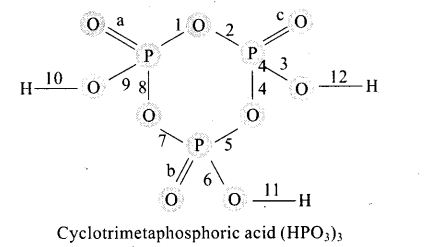 Question 5. Which of the following pairs of ions are isoelectronic and isostructural?

Solution: (a) CO2- and NO3 are isoelectronic with 32 electrons and sp2 hybridisation hence trigonal planar structure.

Question 7. Bond dissociation enthalpy of E – H (E = element) bonds is given below. Which of the compounds will act as strongest reducing agent?

Question 8. On heating with concentrated NaOH solution in an inert atmosphere of CO2, white phosphorus gives a gas. Which of the following statement is incorrect about the gas?
(a) It is highly poisonous and has smell like rotten fish.
(b) Its solution in water decomposes in the presence of light.
(c) It is more basic than NH3
(d) It is less basic than NH3
Solution:

H3PO4 has 3 -OH groups i.e., has three ionisable H-atoms and hence forms three series of salts. These three possible series of salts of H3PO4 are as follows: .
NaH2PO4, NaHPO4 and  Na3PO4

Question 14. Which of the following statement is wrong?
(a) Single N – N bond is stronger than the single P – P bond.
(b) PH3 can act as a ligand in the formation of coordination compound with transition elements.
(c) NO2 is paramagnetic in nature.
(d) Covalency of nitrogen in N2O2 is four.
Solution: (a) Nitrogen forms pÏ€-pÏ€ multiple bond and the bond strength is very high. Single N – N bond is weaker than single P – P bond.

Question 15. A brown ring is formed in the ring test for NO3 ion. It is due to the formation of

Solution: (a) When freshly prepared solution of FeSO4 is added in a solution containing NO3 ion, it leads to formation of a brown coloured complex. This is known as brown ring test of nitrate.

Question 22. Hot cone. H2SO4 acts as moderately strong oxidizing agent. It oxidises both metals and non-metals. Which of the following element is oxidised by cone. H2SO4 into two gaseous products?
(a) Cu (b) S (c) C (d) Zn
Solution:

Question 26. Reduction potentials of some ions are given below. Arrange them in decreasing order of oxidizing power.

Solution: (c) The higher the reduction potential, the higher is its tendency to get reduced. Hence, the order of oxidizing power is
BrO4– > IO4– > CIO4– 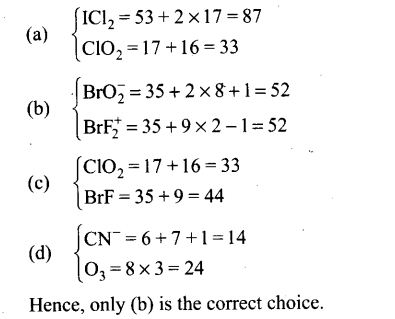 Question 28. If chlorine gas is passed through hot NaOH solution, two changes are observed in the oxidation number of chlorine during the reaction. These are —— and ——-
Solution: (a) 0 to +5

Question 29. Which of the following options are not in accordance with the properly mentioned against them? 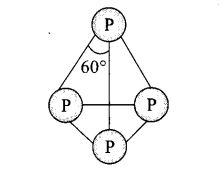 It has total four lone pairs of electrons situated at each P-atom.
It has six P – P single bond.

Question 34. Which of the following orders are correct as per the properties mentioned against each?

Question 35. Which of the following statements are correct?
(a) S – S bond is present in H2S2O6.
(b) In peroxosulphuric acid (H2SO5) sulphur is in +6 oxidation state.
(c) Iron powder along with Al2O3 and K2O is used as a catalyst in the preparation of NH3 by Haber’s process
(d) Change in enthalpy is positive for the preparation of SO3 by catalytic oxidation of SO2.
Solution: (a, b)

Question 36. In which of the following reactions cone. H2S04 is used as an oxidizing reagent?

Solution: (b, c) In the above given four reactions, (b) and (c) represent oxidizing behaviour of H2S04. As we know that oxidizing agent reduces itself as oxidation state of central atom decreases.
Here,

Question 44. Give reason to explain why ClF3 exists but FCl3 does not exist.
Solution: ClF3  is known because chlorine can exhibit +3 oxidation state due to promotion of

Each of the three singly occupied orbitals overlap with p-orbital of each of three fluorine atoms to form ClF3 (trigonal bipyramidal geometry, T-shaped molecule).
No (i-orbitals are present in the valency shell of fluorine and thus excitation is not possible. Fluorine, therefore, does not exhibit positive oxidation state and so the formation of FCl3 is not possible.

Question 45. Out of H2O and H2S, which one has higher bond angle and why?
Solution: Oxygen is more electronegative than sulphur therefore bond pair of electrons of O – H bond will be closer to oxygen. As a result, there will be more bond pair-bond pair repulsion between bond pairs of two O – H bonds.

Question 46. SF6 is known but SCl6 is not. Why?
Solution: Due to small size, six fluorine atoms can be accommodated around sulphur atom while chlorine atoms being larger in size are difficult to accommodate.
The other reason is that the fluorine being highly electronegative and oxidising in nature is capable of unpairing the paired orbitals of the values shell of sulphur atom and thereby showing the highest, oxidation state of +6 while chlorine is not able to do this.

Question 47. On reaction with Cl2, phosphorus forms two types of halides â€˜A’ and â€˜B’. Halide A is yellowish-white powder but halide B’ is colourless oily liquid. Identify A and B and write the formulas of their hydrolysis products.
Solution: When dry chlorine is passed over white phosphorus heated gently in a retort, first phosphorus trichloride is formed. PCl3 further reacts with Cl2 and forms phosphorus pentachloride PCl5.

Question 48. In the ring test of NO3 ion.Fe2+ion reduces nitrate ion to nitric oxide, which combines with Fe2+  (aq.) ion to form brown complex. Write the reactions involved in the formation of brown ring.
Solution:

Question 51. P4O6 reacts with water according to equation P4O6 + 6H2O Calculate the volume of 0.1 M NaOH solution required to neutralize the acid formed by dissolving 1.1 g of P4O6 in H2O.
Solution: 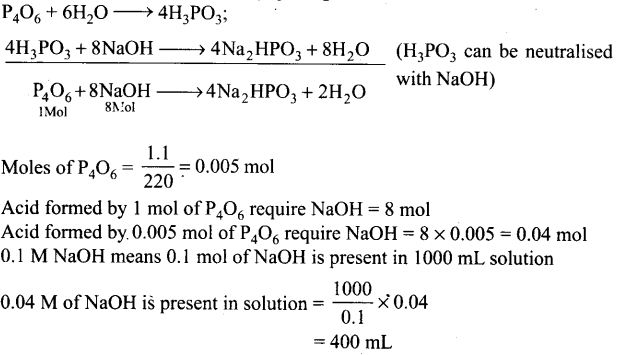 Question 55. Phosphorus has three allotropic fonns â€”(i) white phosphorus (ii) red phosphorus and (iii) black phosphorus. Write the difference between white and red phosphorus on the basis of their structure and reactivity.
Solution: Yellow or white phosphorus: It is a discrete tetrahedral molecule. The molecular formula is P4. The four phosphorus atoms lie at the comers of a regular tetrahedron. Each P atom is linked to each of the three other atoms by single covalent bonds i.e., six P – P bonds are present and each P atom has a lone pair. 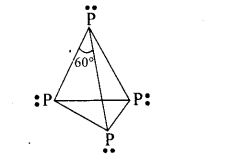 Question 58. Phosphorus forms a number of oxoacids. Out of these oxoacids phosphinic acid has strong reducing property. Write its structure and also write a reaction showing its reducing behaviour.
Solution: Phosphinic acid is hypophosphorus acid (H3PO2) which acts as a reducing agent due to possession of P – H bonds. 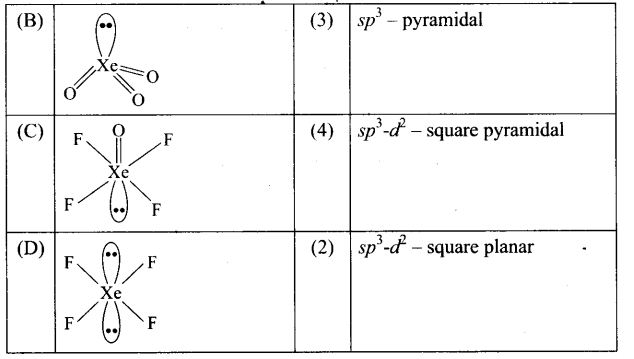 Question 61. Match the items of Column I and Column II and mark the correct option. 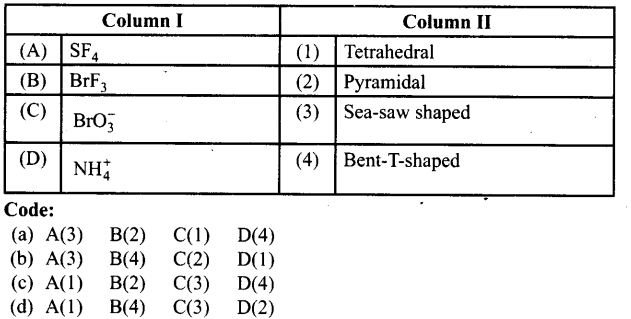 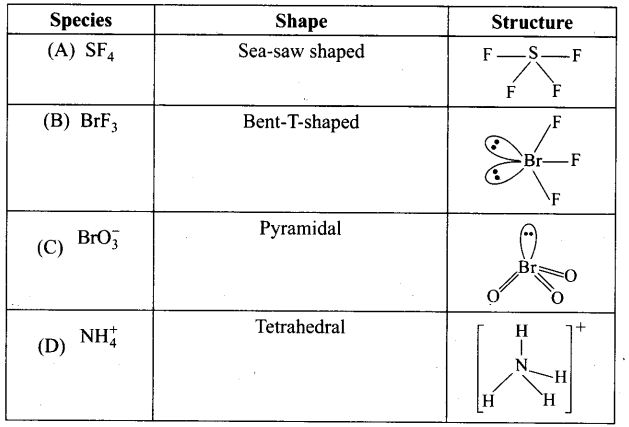 Question 63. Match the items of Column I and Column II and mark the correct option. 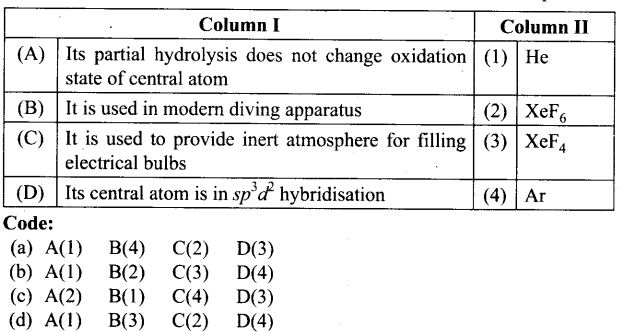 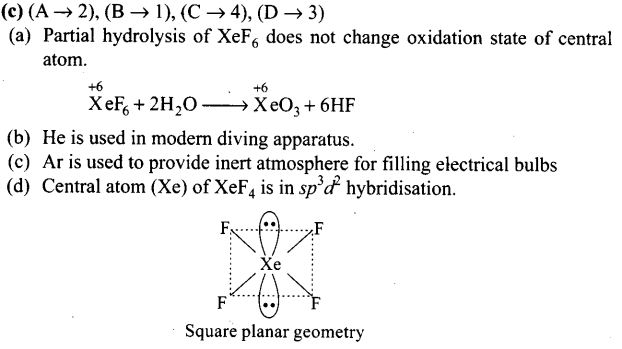 Question 65. Assertion (A): HNO3 makes from passive.
Reason (R): HNO3 forms a protective layer of ferric nitrate on the surface of iron.
Solution: (c) Passivity is attained by formation of a thin film of oxide on iron.

Question 66. Assertion (A): HI cannot be prepared by the reaction of KI with concentrated H2SO4.
Reason (R): HI has lowest H – X bond strength among halogen acids.
Solution: (b) Both statements are correct but are independent of each other.

Question 70. An amorphous solid “A”bums in air to form a gas “B”which turns lime water milky. The gas is also produced as a by-product during roasting of sulphide ore. This gas decolourises acidified aqueous KMnO4  solution and reduces Fe3+ to Fe+2. Identify the solid “A”and the gas “B”and write the reactions involved.
Solution: A is sulphur (Sg) while B is sulphur dioxide (SO2).

Question 71. On heating lead (II) nitrate gives a brown gas “A”. The gas “A”on cooling changes to colourless solid “B”. Solid “B”on heating with NO changes to a blue solid C. Identify A, B and C and also write reactions involved and draw the structures of B and C.
Solution: The gas A is NO2   . The reactions are explained as under: 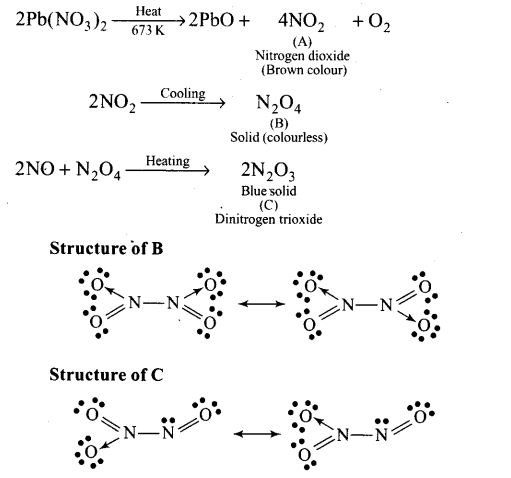 Question 72. On heating compound (A) gives a gas (B) which is a constituent of air. This gas when treated with 3 mol of hydrogen (H2   ) in the presence of a catalyst gives another gas (C) which is basic in nature. Gas C on further oxidation in moist condition gives a compound (D) which is a part of acid rain. Identify compounds (A) to (D) and also give necessary equations of all the steps involved. –
Solution: 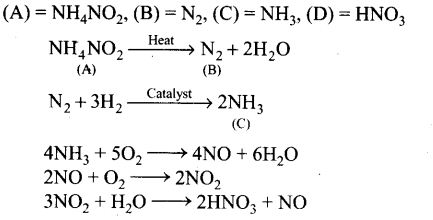