1. What are the various constituents of domestic sewage? Discuss the effects of sewage discharge on a river.
Ans:    Domestic sewage contains four kind of impurities:
(i)Suspended solids: They are soil particles such as sand and silt.
(ii)Colloidal particles: They are inorganic and organic materials such as faecal matter, bacteria, paper and cloth.
(iii)Dissolved solids : They are nitrates, phosphates, ammonia, sodium, calcium and other nutrients.
(iv)Pathogens : Domestic sewage has pathogens of various diseases such as typhoid, cholera, dysentery, diarrhoea, etc. Effect of sewage discharge on river are:
(i)Eutrophication.
(ii)Growth of pathogenic bacteria.
(iii)Ageing of river where slit and decaying matters start accumulating and filling river.
(iv)Increase in BOD.
(v)Destruction of flora and fauna of that river.

2. List all the wastes that you generate, at home,school or during your trips to other places. Could you very easily reduce the generation of these wastes? Which would be difficult or rather impossible to reduce?
Ans:  Plastic containers, paper, electronic goods, left over food, food package, disposable glasses, cup plates, polythenes, excreta, soap and detergent waste are the wastes that one can generate at home, school or during trips to other places. Yes, we can easily reduce waste through judicious use of material by changing our habits & life styles.
Out of these, polythene and plastic material are hard to dispose off as they are non- biodegradable and they can be recycled back.

3. Discuss the causes and effects of global warming. What measures need to be taken to control global warming?
Ans:  Increase in atmospheric concentration of green house gases has resulted in rise of atmospheric temperature by 0.6 °C (global wanning) in die 20th century. This has been confirmed by intergovernmental panel on climatic change (IPCC) in its reports of 1991 and 1992. This predictable change in near future may affect climate, sea level, range of species distribution, food production as well as fisheries resources in the oceans.
Causes of global warming:
(i)Increase in concentration of greenhouse gases.
(ii)Increase of automobile and use of fossil fuel.
(iii)Deforestation and change in land use.
(iv)CFC and aerosol emission from refrigerator and aeroplane.
(v)Increased particulate matter in lower atmosphere.
Effects of global warming:
(i)CO2 fertilisation effect.
(ii)Many species of plants, being sensitive to temperature will die with sudden rise in temperature and their place will be taken over by scrub vegetation.
(iii)Loss of biodiversity.
(iv)Rise in sea level.
(v)Possibilities of drought and floods.
(vi)Erruption of plant disease and pests.
(vii)Change in rainfall pattern.
Methods that can reduce the atmospheric concentration of greenhouses gases are
(i) Reducing the greenhouse gas emission by limiting the use of fossil fuels, and by developing alternative renewable sources of energy (wind energy, solar energy etc.)
(ii)Increasing the vegetation cover, mainly the forests, for photosynthetic utilization of CO2.
(iii)Minimizing the use of nitrogen fertilizers in agriculture for reducing N2O emissions.
(iv)Developing substitutes for chlorofluorocar- bons.

4. Match the items given in column A and B: 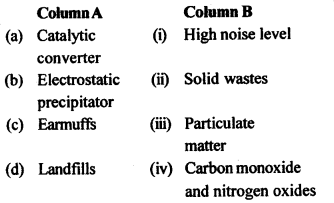 5. Write critical notes on the following:
(a)Eutrophication
(b)Biological magnification
(c)Groundwater depletion and ways for its replenishment
Ans:  (a)Eutrophication : It is excessive growth of algae, plants and animals in water bodies due to the nutrient enrichment particularly with nitrogen and phosphorus. It is both natural and accelerated. It leads to loss of bio-diversity and cuases chemical accumulation in food chain and ageing of water body.
(b)Biological magnification : Increase in concentration of persistent chemical at successive trophic levels is called eutrophication. This happens because a toxic substance accumulated by an organism can not be metabolized or excreted, and is thus passed onto next trophic level, e.g., DDT.
(c)Ground water depletion and replacement: Ground water depletion, a term often defined as long term water level declines caused by sustained ground water pumping, is a key issue associated with ground water use. Many areas of India experiencing ground water depletion.
The most servere consequence of excessive ground water pumping is that the water table, below which the ground is saturated – with water, can be lowered. If ground water level declines too far, then the well owner might have to deepen the well, drill a new well, or at least attempt to lower the pump.

6. Why does ozone hole forms over Antarctica? How will enhanced ultraviolet radiation affect us?
Ans:  A large amount of ODS (Ozone Depleting Sub-stances) like CFCs, N2O, halons, SO2, CH4, Cl-are released by advanced countries like USA, Japan, European countries. These are released in stratosphere, drift towards poles and reach there before the coming of winter. During winter (temp. 85 °C) ice clouds are formed over Antarctica and no sunrise is received in polar areas. It catalyses release of Cl from CFCs. With the coming of spring season, Cl reacts with ozone in the presence of sunlight and converts 03 into 02 causing ozone depletion/thining of ozone shield in stratosphere called ozone hole. This hole disappears in summer due to free mixing of air ofAntarctica with therestofthe global air. Effect of Enhanced UV Radiation, (i) Snow blindness or inflammation of cornea (ii) Damage of skin cells and development of skin cancer, (iii) Damage to nucleic acids and proteins, (iv) Reduced immunity (v) Higher number of cataracts in humans.

7. Discuss the role of women and communities in protection and conservation of forests.
Ans:    Amrita Bishnoi Wildlife protection project The Bishnoi community is known for its peaceful coexistence with nature. It was in 1730 AD. Amrita Devi protested against king’s men’s attemptto cut trees as it was prohibited in Bishnoi religion. It was a party of Maharaja Abhay Singhji, Rular of Marwar (Jodhpur) state who wanted to fell green khejdali trees. Amrita Devi fy her three daughter & more than 360 of other Bishnois lost their lives in saving trees & became martyers. Later ‘Chipko’ movement’ was started by Sunderlal Bahuguna and others to prevent cutting of trees. The people showed enormous bravery in protecting trees from the axe of contractors by hugging them.

8. What measures, as an individual, would you take to reduce environmental pollution?
Ans:  To reduce environmental pollution we should take following measures:
(i)Reducing use of CFC.
(ii)Disposing off waste safely.
(iii)Reducing use of polythene.
(iv)Not disposing off waste in water bodies.
(v)Making automobiles pollution free.
(iv)Prevention of noise pollution by using fire crackers/TV/musical instruments at permissible limits.
(vii)Tree plantation in school, around residence.

9. Discuss briefly the following:
(a)Radioactive wastes
(b)Defunct ships and e-wastes
(c)Municipal solid wastes
Ans:  (a) Radioactive waste : Radioactive waste include materials that are radioactive & for which there is no further practical use. These are generated by nuclear reactor, nuclear fallout, man made (refining and mining of platinum and thorium), natural radioactive waste and release of radiation in radiation therapy.
Increased risk of cancer, birth defects & infertility are few harmful effects caused by nuclear waste. So, nuclear waste is an extremely potent pollutant.
(b)Defunct ships & e-wastes – The dismantling of defunct ship is a technically complex process, which is potentially harmful to the environment & human health. Defunct i ships contain toxicants like asbestos, mercury, etc. The workers breaking the ships are not suitably protected and are exposed to toxic chemicals. The coastal areas in the vicinity of the ship-breaking yard also becomes polluted. At the international level, it is accepted that there is uncertainty about the relevant controls for the dismantling of such vessels & there is an urgent need to establish a specific enforceable control framework.
Electronic waste comprised of irrepairable computer and other electronic goods, generated by developed countries.
It is valuable source of secondary raw materials, if treated properly, however if not treated properly it is the major source of toxins. Eventually recycling is the only solution for the treatment of e-wastes provided it is carried out in an environment friendly manner.
(c) Municipal solid wastes : These are commonly known as trash or garbage. It consists of everyday items such as product packaging, furniture, clothing, bottles, food scraps, newspapers.
appliances, paints, batteries etc. Source reduction, recycling and compositing are several municipal social waste management practices. Source reduction involves altering the design, manufacture or use of products & materials to reduce die amount and toxicity of what gets thrown away. Recycling diverts items such as paper, glass, plastic & metals into anew products. Composting decomposes organic waste such as food scraps & yard trimmings with micro-organisms, producing a humus-like substance.

11. Discuss briefly the following:
(a)Greenhouse gases
(b)Catalytic converter
(c)Ultraviolet B
Ans:  (a) Greenhouse gases: Gases that trap the heat of the sun in the earth’s atmosphere increasing atmospheric temperature effect are called greenhouses gases. CO2, CH4, N2O and CFC, cause greenhouse. In the absence of greenhouse gases, the temperature of earth would go down to -18 °C. The net effect of higher GHGs will be disastrous, (i) Melting of polar ice caps and mountain snow caps resulting in rising of sea level threatening submergence of many islands and coastal areas. Odd climate changes like El Nino. Increased floods and drought.
(b)Catalytic converter : Catalytic converter ‘are used to reduce emission of poisonous gases like nitrogen oxides, carbon monoxide & un reacted hydrocarbon in automotive emission. It is made of platinum, palladium and rhodium and is used as catalyst. It converts unbumt hydrocarbons into CO2. The only precaution required is not to use gasoline having lead as lead inactivates the catalysts of the converter.
(c)Ultraviolet B : Ultraviolet B is one of the three types of invisible light rays given off by the sun. Ultraviolet B penetrates the ozone layer in attenuated form & reaches earths. This is more over equator than poles due to thinning of ozone shield over equator. It causes skin cancer, reduce rate of photosynthesis in phytoplanktons, reduces diversity of aquatic ecosystem.