NCERT Solutions For Class 12 Biology Principles of Inheritance and Variation

1.Mention the advantages of selecting pea plant for experiment by Mendel
Ans. Mendel select garden pea (Pisum Sativum) for the following reasons.
(i)It is an annual plant with short life span and gives results within 3 months.
(ii)The plant is grown easily and does not require after care except at the time of pollination.
(iii)F1 hybrids are fertile.
(iv)Seven pairs of contrasting characters easily detectable.
(v)True breeding self pollination.

2. Differentiate between the following –
(a)Dominance and Recessive
(b)Homozygous and Heterozygous
(c)Monohybrid and Dihybrid.
Ans.(a)The difference between dominance and recessive me: 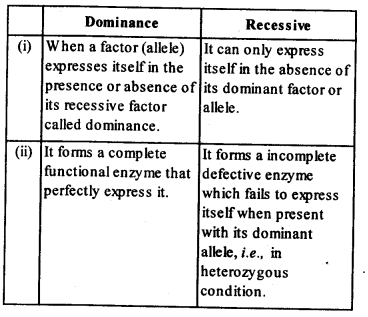 (b) Differences between homozygous and heterozygous individuals :

(c) In breeding experiments when a cross is made between the individuals considering their same single character, it is called mono ¬hybrid cross, while a cross is done consid ¬ering two characters at fee same time is called dihybrid cross (Yellow Round * Green Wrinkled).

4. Explain the Law of Dominance using a monohybrid cross.
Ans. When two different factors (genes) or a pair of contrasting forms of a character are present in an organism, only one expresses itself in the F, generation and is termed as dominant while the other remains unexpressed and called recessive factors (gene).
A tall (TT) true breeding plant is crossed with a dwarf (tt) plant. The character of height is represented byâ€˜T’ for tallâ€˜t’ for dwarf are the alternate form as character of height. The Fj hybrid â€˜Tt’ is Tall, showing that tall is dominant over dwarf while dwarf remains unexpressed in F, offspring due to phenomenon of dominance by tall factor or gene.In this Tt heterozygous has tall phenotype showing T is dominant over t allele.

5. Define and design a test-cross.
Ans. When an individual is crossed with the homozygous recessive parent. It is called test cross. 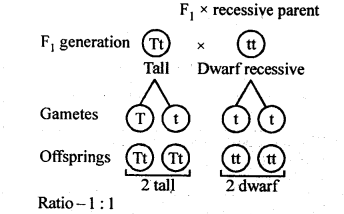 6. Using a Punnett Square, workout the distribution of phenotypic features in the first filial generation after a cross between a homozygous female and a heterozygous male for single locus.
Ans. 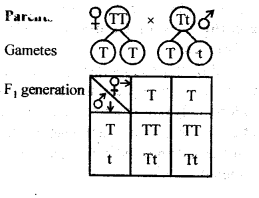 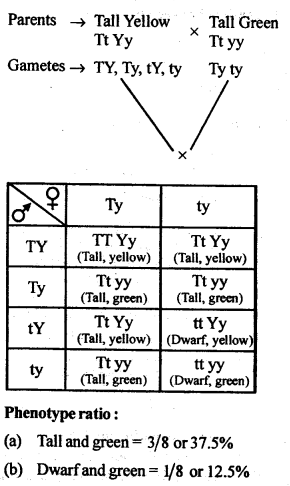 8. Two heterozygous parents are crossed. If the two loci are linked what would be the distribution of phenotypic features in F1 generation for a dihybrid cross?
Ans. Consider 2 characters Blue (B), long (L) seeds of a plant – both characters linked. 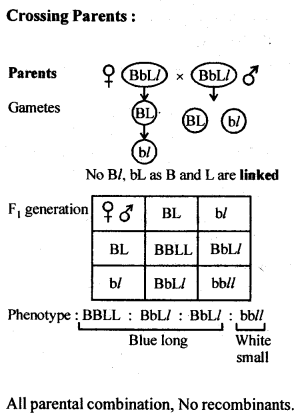 9.Briefly mention the contribution of T.H. Morgan in genetics.
Ans.Thomas Hunt Morgan (1866-1945) is called father of experimental genetics. He was an American scientists, famous for his experimental research with the fruit fly (Drosophila) by which he established the chromosome theory of heredity. He discovered presence of gene over chromosomes, chromosome theory of linkage, chromosome mapping, crossing over, criss-cross inheritance & mutability of genes. Morgan’s work played a key role in establishing the field of genetics. He received the nobel prize for physiology or Medicine in 1933.

10.What is pedigree analysis? Suggest how such an analysis, can be useful.
Ans. Pedigree analysis is study of pedigree for the transmission of particular trait and finding the possibility of absence or presence of that trait in homozygous or heterozygous state in a particular individual. Pedigree analysis helps-
(i)in analysis of transmission of character in family over generation.
(ii)in genetic counselling of disease like haemophilia.
(iii)to identify whether a particular genetic disease is due to recessive gene or a dominant gene.
(iv) to identify the possible origin of the defective gene in the family or in a population. 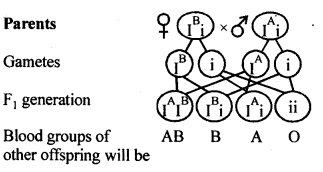 13.Explain the following terms with example
(a)Co-dominance
(b)Incomplete dominance
Ans.(a) Codominance : Codominance is the phenomenon of two contrasting alleles of the same gene lacking dominant recessive ratio and expressing themselves simultaneously when present together. E.g. ABO blood group system – Human blood group AB is formed when alleles of blood groups A and B are present together (IAIB). Such RBCs carry both antigen A & B showing that both die alleles are expressing their effect phenotypically & codominant.
(b) Incomplete dominance : Incomplete dominance may be defined as the partial /expression of both alleles in a heterozygote so that the phenotype is intermediate between those of two homozygotes. In this none of the allele is completely dominant, e.g., Pink colour flower in dog flower. In Mirabilis jalapa & Snapdragon or dog flowers, there are two types of flower colour in pure state-red & white. When the two types of plant are crossed, the hybrid or plants of Fj generation have pink flowers. The pink colour apparently appears either due to mixing of red & white colours (incomplete dominance) or expression of a single gene for pigmented flower which produces only pink colour.

14.What is point mutation? Give one example.
Ans. Mutations arising due to change in single base pair of DNA is called point mutation. Eg., sickle cell anaemia, haemophilia.