4. Offspring formed due to sexual reproduction have better chances of survival. Why? Is this statement always true?
Ans:  The offspring that are produced by sexual reproduction are not genetically identical to their parents. They exhibit variations because they receive chromosomes from two different parents. Since they show variation, they are highly adapted to the changing environment. Asexually produced organisms are genetically identical and all organism show similar adaptations. So, during any calamity, there is a possibility that the whole generation would destroy leading to extinction of species. However, this statement is not true always because of some inborn genetic disorder due to which organism have a risk in their survival, e.g., Haemophilia. 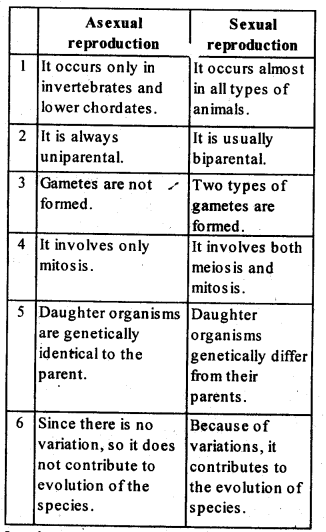 In plants asexual reproduction is called vegetative reproduction because vegetative plant parts like rhizome, runner, sucker, tuber, bulb all are capable of producing off springs These parts give rise to daughter individuals without the involvement of two parents.

7. What is vegetative propagation? Give two  suitable examples.
Ans:  Vegetative propagation in plants is a method of asexual reproduction in which the parts other than seeds are used as propagules. In fact, it is a method of propagation in those plants which have lost their capacity to produce, seeds or produce non-viable seeds (e.g., Banana, seedless Grapes, Rose, Pineapple, etc.) Among flowering plants, every part of the body, such as root, stem, leaf or bud takes part in vegetative propagation. Modified tuberous roots can be propagated vegetatively when planted in soil (e.g., sweet potato).
Underground modified stems such as rhizomes (e.g., Ginger, Eichhornia or water hyacinth, etc.), corms (e.g., Colocasia, Banana, etc.), bulbs.(e.g., Garlic, onion, etc.), etc.

12. Define external fertilization. Mention its disadvantages.
Ans:  When fusion of the gametes takes place outside the body of the organisms, it is called external fertilization or external syngamy. The external medium like water is required for this form of fertilization. This form, is found in many aquatic animals like fishes, amphibians, majority of algae.
In this, parents release eggs and sperms in the surrounding water, then fertilization and development of offspring occur externally. Disadvantages of external fertilization:
(i)if occurs only in aquatic medium.
(ii)A chance factor is involved requiring synchronous release of gametes nearby and absence of turbulence of water.
(iii)There is no protection to young ones. They are vulnerable to a number of predators.

13. Differentiate between a zoospore and a zygote.
Ans:  Zoospores are Ihe microscopic, flagellated (motile) special asexual reproductive structures found in certain members of the kingdom fungi and simple plants like algae whereas zygote is a diploid cell formed by die fusion of male and female gametes. The zygote is usually nonflagellated. Zoospores are the structures that give rise to new organism whereas zygote is formed after fertilization which develops into a mature organism. 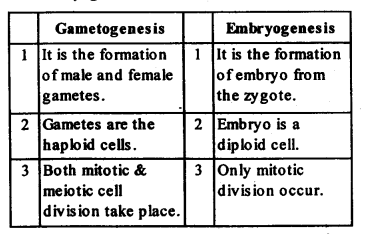 15. Describe the post-fertilization changes in a flower.
Ans:  In sexual reproduction, events that occur after the formation of zygote are called post-fertilization events. In flowering plants, the zygote is formed inside the ovule. After fertilization the sepals, petals and stamens of the flower wither and fall off. But the pistil remains attached to the plant. The zygote develops into the embryo and the ovules develop into the seed. The ovary develops into die fruit that develops.a thick wall called pericarp which is protective in – function. After dispersal, seeds germinate under favourable conditions to produce new plants.

16. What is % bisexual flower? Collect five bisexual flowers from your neighbourhood and with the help of your teacher find out their common and scientific names.
Ans:  Flowers in which male and female sex organs (stamens and carpels) are borne on the same flowers are called bisexual flowers. You can observe following bisexual flowers in your kitchen and colony gardens :
(i)Brassica (sarson) – Brassica campestris
(ii)Onion – Allium cepa
(iii)Garden Pea (Edible pea) – Pisum sativum
(iv)Petunia – Petunia hybrida
(v)China rose (shoe flower) – Hibiscus rosa- sinensis.