13.1.Classify the following amines as primary, secondary and tertiary:

13.2.(i)Write the structures of different isomeric amines corresponding to the molecular formula, C4H11N.
(ii)Write 1UPAC names of all the isomers.
(iii)What type of isomerism is exhibited by different pairs of amines?
Ans. 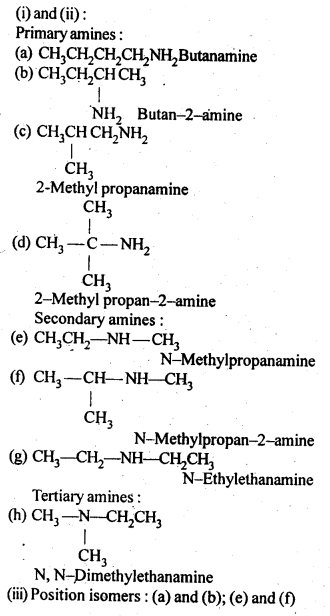 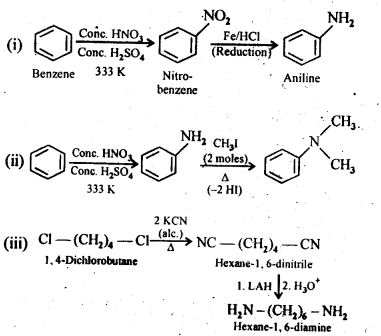 13.6 Write reactions of the final alkylation product of aniline with excess of methyl iodide in the presence of sodium carbonate solution.
Ans. 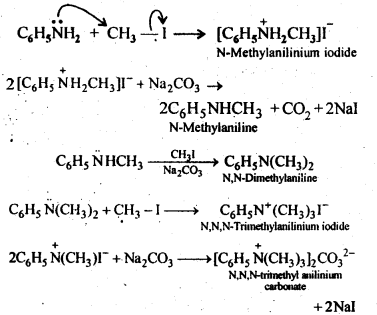 13.7 Write chemical reaction of aniline with benzoyl chloride and write the name of the product obtained.
Ans. 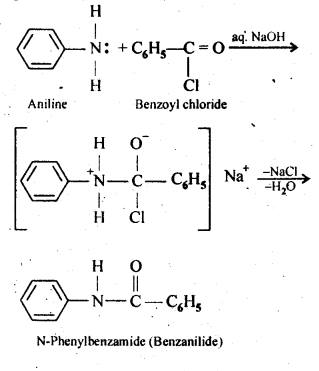 13.8 Write structures of different isomers corresponding to the molecular formula, C3H9N. Write IUPAC names of the isomers which will liberated N2 gas on treatment with nitrons acid.
Ans. In ‘all, four structural isomers are possible. These are: 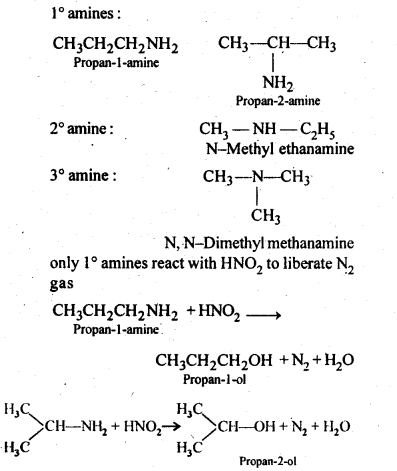 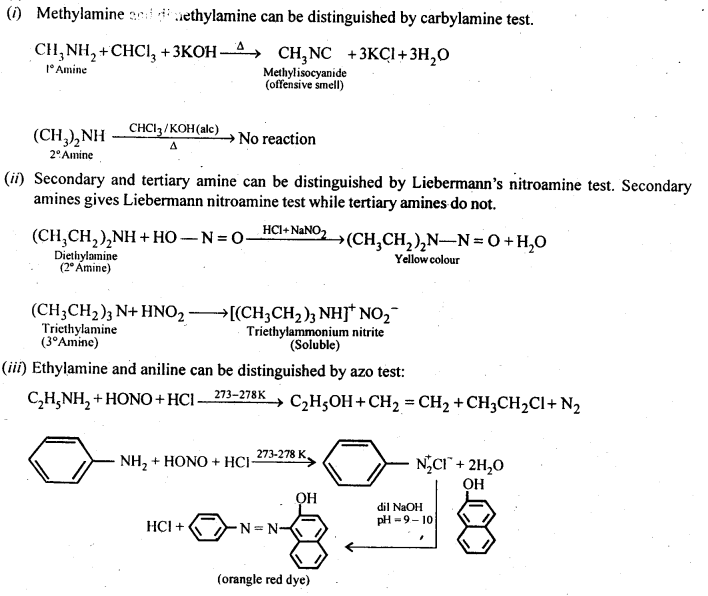 13.3 Account for the following
(i)pKb of aniline is more than that of methylamine
(ii) Ethylamine is soluble in water whereas aniline is not.
(iii) Methylamine in water reacts with ferric chloride to precipitate hydrated ferric oxide.
(iv)Although amino group is o and p – directing in aromatic electrophilic substitution reactions, aniline on nitration gives a substantial amount of m-nitroaniline.
(v)Aniline does not undergo Friedel-Crafts reaction.
(vi)Diazonium salts of aromatic amines are more stable than those of aliphatic amines.
(vii)Gabriel phthalimide synthesis is preferred for synthesising primary amines.
Ans. (i) In aniline, the lone pair of electrons on the N-atom is delocalised over the benzene ring.
As a result, electron density on the nitrogen . atom decreases. Whereas in CH3NH2,+ I-effect of -CH3 group increases the electron density on the N-atom. Therefore, aniline is a weaker base than methylamine and hence its pKb value is higher than that of methylamine.
(ii) Ethylamine dissolves in water due to intermolecular H-bonding. However, in case of aniline, due to the large hydrophobic part, i.e., hydrocarbon part, the extent of H-bonding is very less therefore aniline is insoluble in water. 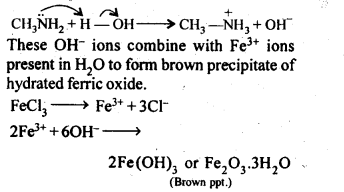 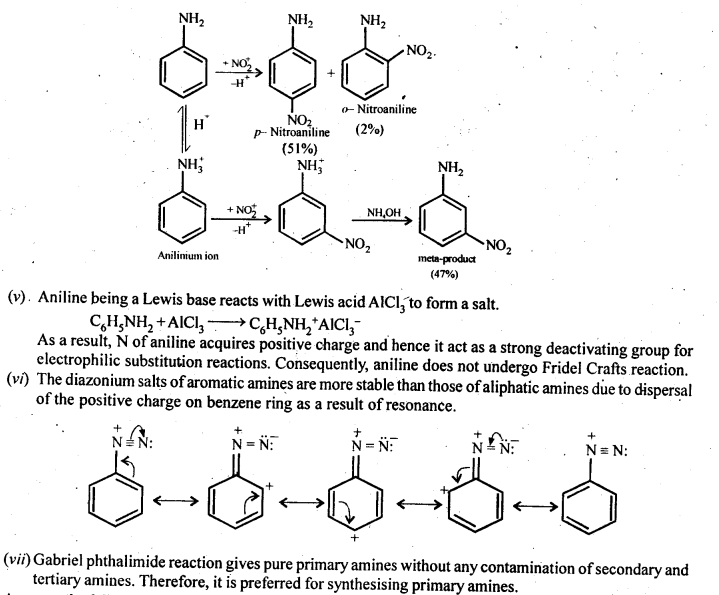 (iv) In gas phase or in non-aqueous solvents such as chlorobenzene etc, the solvation effects i. e., the stabilization of the conjugate acid due to H-bonding are absent. Therefore, basic strength depends only upon the +I-effect of the alkyl groups. The +I-effect increases with increase in number of alkyl groups.Thus correct order of decreasing basic strength in gas phase is,

(vi)Solubility decreases with increase in molecular mass of amines due to increase in the size of the hydrophobic hydrocarbon part and with decrease iirthe number of H-atoms on the N-atom which undergo H-bonding.

13.6 Describe a method for the identification of primary, secondary and tertiary amines. Also write chemical equations of the reactions involved.
Ans. The three type of amines can be distinguished by Hinsberg test. In this test, the amine is shaken with benzenesulphonyt chloride (C6H5SO2Cl) in the presence of excess of aqueous NaOH or KOH. A primary amine reacts to give a clear solution, which on acidification yields an insoluble compound.

(iii)Hoffmann’s bromamide reaction: When an amide is treated with bromine in alkali solution, it is converted to a primary amine that has one carbon atom less than the starting amide. This reaction is known as Hoffinann’s bromamide degradation reaction.

(iv) Coupling reaction: In this reaction, arene diazonium salt reacts with aromatic amino compound (in acidic medium) or a phenol (in alkaline medium) to form brightly coloured azo compounds. The reaction generally takes place at para position to the hydroxy or amino group. If para position is blocked, it occurs at ortho position and if both ortho and para positions are occupied, than no coupling takes place.

(v) Ammonolysis: It is a process of replacement of either halogen atom in alkyl halides (or aryl halides) or hydroxyl group in alcohols (or phenols) by amino group. The reagent used for ammonolysis is alcoholic ammonia. Generally, a mixture of primary, secondary and tertiary amine is formed.

(vii) Gabriel phthalimide synthesis: It is a method of preparation of pure aliphatic and aralkyl primary amines. Phthalimide on treatment with ethanolic KOH gives potassium phathalimide which on heating with a suitable alkyl Or aralkyl halides gives N-substituted phthalimides, which on hydrolysis with dil HCI or with alkali give primary amines. 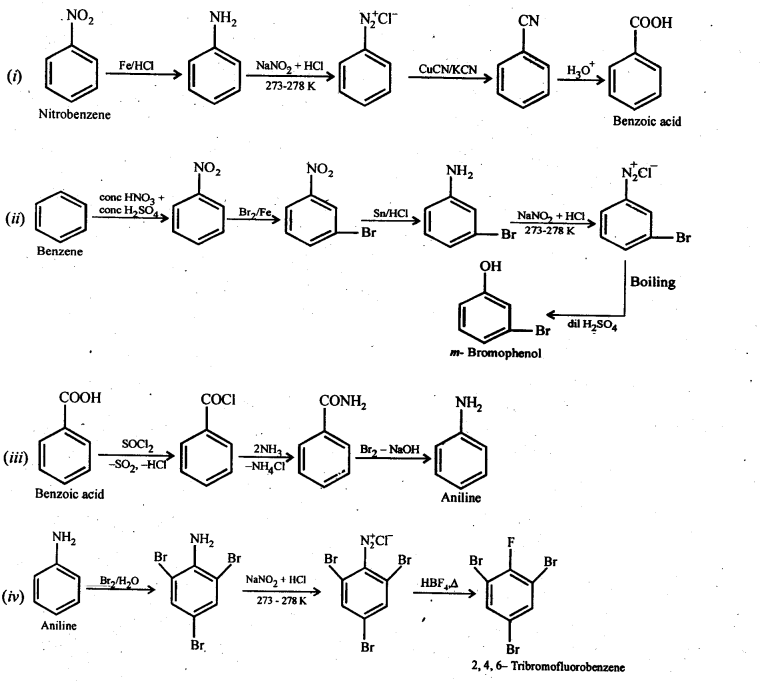 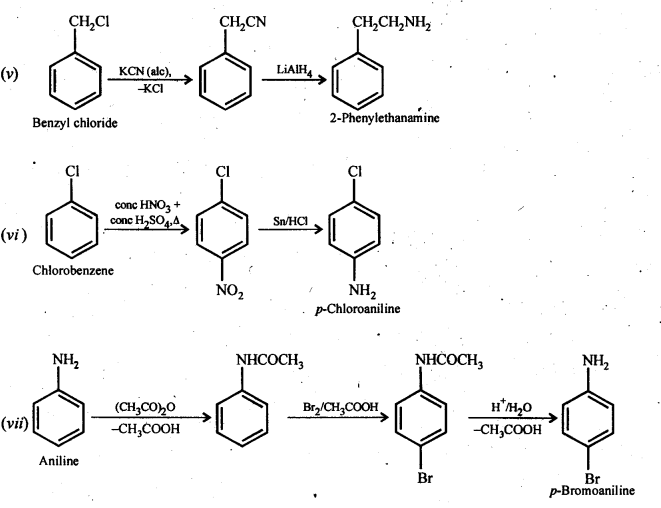 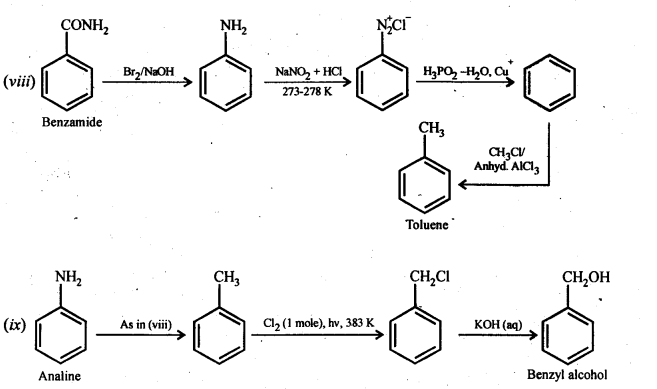 13.9 Give the structures of A,B and C in the following reaction: 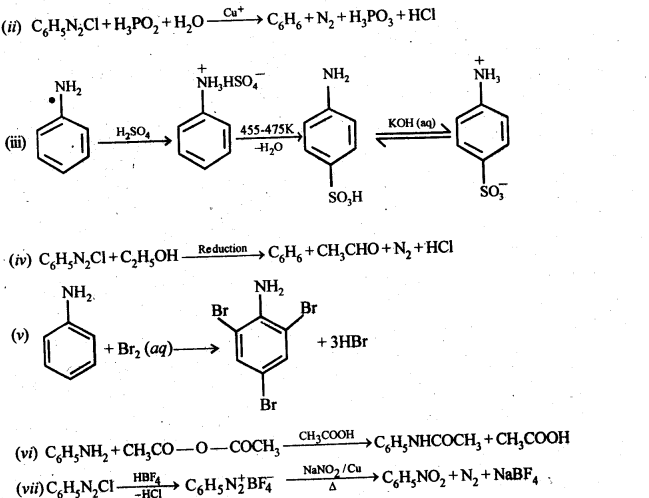 13.14 Give plausible explanation for each of the following:
(i) Why are amines less acidic than alcohols of comparable molecular masses?
(ii) Why do primary amines have higher boiling point than tertiary amines?
(iii) Why are aliphatic amines stronger bases than aromatic amines?
Ans. (i) Loss of proton from an amine gives an amide ion while loss of a proton from alcohol give an alkoxide ion.
Râ€”NH2â€”>Râ€”NH– +H+
Râ€”O â€”Hâ€”>Râ€” O– +H+ .
Since O is more electronegative than N, so it wijl attract positive species more strongly in comparison to N. Thus, RO~ is more stable than RNH ®. Thus, alcohols are more acidic than amines. Conversely, amines are less acidic than alcohols.
(ii) Due to the presence of two H-atoms on N-atom of primary amines, they undergo extensive intermolecular H-bonding while tertiary amines due to the absence of H-atom on the N-atom do not undergo H-bonding. As a result, primary amines have higher boiling points than tertiary amines of comparable molecular mass.
(iii) Aromatic amines are far less basic than ammonia and aliphatic amines because of following reasons:
(a)Due to resonance in aniline and other aromatic amines, the lone pair of electrons on the nitrogen atom gets delocalised over the benzene ring and thus it is less easily available for protonation. Therefore, aromatic amines are weaker bases than ammonia and aliphatic amines.
(b)Aromatic amines arS more stable than corresponding protonated ion; Hence, they hag very less tendency to combine with a proton to form corresponding protonated ion, and thus they are less basic.