5.1. Write any two characteristics of Chemisorption.
Ans:  Pt and Pd form inert electrodes, i.e., they are not attacked by the ions of the electrolyte or the products of electrolysis. Hence, they are used as electrodes for carrying out electrolysis.

5.2.Why does physisorption decrease with the increase of temperature?
Ans:  Physisorption is an exothermic process :

According to Le-Chatelier’s principle, if T is increased, equilibrium shifts in the backward direction i.e., gas is released from the surface of solid.

5.5.Why is the ester-hydrolysis slow in the beginning and becomes faster after sometime?
Ans:  The ester hydrolysis takes place as follows :

5.6. What is the role of desorption in the process of catalysis.
Ans:  Desorption makes the surface of the solid- catalyst free for fresh adsorption of the reactants on the surface.

5.7. What modification can you suggest in the Hardy Schulze, law?
Ans:    According to Hardy Schulze law, the coagulating ion has charge opposite to that on the colloidal particles. Hence, the charge on colloidal particles is neutralized and coagulation occurs.
The modification to this law is :
When oppositely charged sols are mixed in proper proportions to neutralize the charges of each other, coagulation of both the sol occurs.

5.8. Why is it essential to wash the precipitate with water before estimating it quantitatively?
Ans:    Some amount of the e lectrolyte are m ixed to form the ppt. Some of these electrolytes remains adsorbed on the surface of the particles of the ppt. Hence, it is essential to wash the ppt with water to remove the sticking electrolytes (or any other impurities) before estimating it quantitatively.

5.9. Distinguish between the meaning of the terms adsorption and absorption. Give one example of each.
Ans:  This phenomenon of attracting and retaining the molecules of a substance by a solid (or a liquid) on its surface resulting into a higher concentration of the molecules on the surface is known as adsorption.
Absorption is different from adsorption. In absorption, the substance is uniformly distributed throughout the body of a solid or a liquid.
NH3 gets adsorbed on the charcoal where as NH3 when comes in contact with H20 gets absorbed by forming NH4OH solution of uniform concentration.

5.10.What is the difference between physisorption and chemisorption?
Ans: 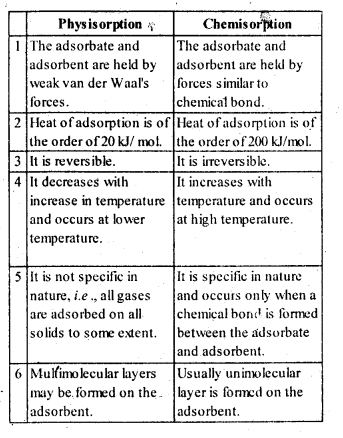 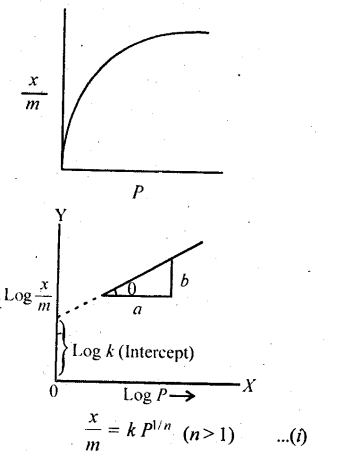 where x is the mass of the gas adsorbed by mass â€˜m’ of the adsorbent at pressure P, k and n are constants which depend on the nature of the adsorbent and the gas at a particular temperature. The relationship is generally represented in the form of a curve where mass of the gas adsorbed per gram by the adsorbent is plotted against pressure. These curves indicate that at a fixed pressure, there is a decrease in physical adsorption with increase in temperature. These curves always seem to approach saturation at high pressure.
Taking log of equation (i), we get

5.6. What do you understand by activation of adsorbent? How is it achieved?
Solution: Activation of an adsorbent means increasing it’s adsorbing power by increasing the surface area of the adsorbent by making it’s surface rough, by removing already adsorbed gases from it and by subdividing the adsorbent into smaller pieces or grains.. 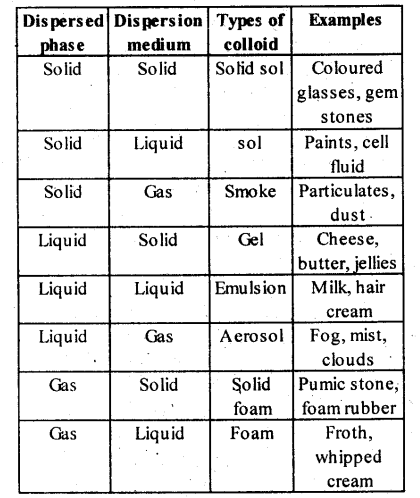 5.11. What are lyophilic and lyophobic sols? Give one example of each type. Why are hydrophobic sols easily coagulated?
Solution: Lyophillic colloids (solvent loving) are those substances that directly pass into the colloidal state when brought- in contact with the solvent, e.g., proteins, starch, rubber, etc.
These sols are quite stable because of the strong attractive forces between the particles of disperse phase and the dispersion medium.
Lyophobic colloids (solvent hating) are those substances that do not form the colloidal sol readily when mixed with the dispersion medium.These sols are less stable than the lyophilic sols. Examples of lyophobic sols include sols of metals and their insoluble compounds like sulphides and hydroxides.
The stability of hydrophobic sol is only due to the presence of charge on the colloidal parties. If charge is removed, e.g., by addition of suitable electrolytes, the particles will come nearer to each other to form aggregate, i.e., they will coagulate and settle down. On the other hand, the stability of hydrophilic sol is due to charge as well as solvation of the colloidal particles. Thuf, for coagulation to occur easily both the mentioned factors have to be removed.

5.13. What are enzymes? Write in brief the mechanism of enzyme catalysis.
Solution: Enzymes are complex nitrogenous organic compounds which act as a biological catalysts and increase the rate of cellular processes. According to the lock and key model, like every lock has a specific key, similarly every enzyme acts as a specific substrate. 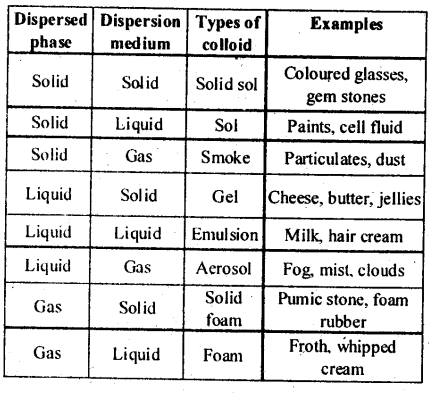 (ii) Depending upon the type of the particles of the dispersed phase, colloids are classified as : Multimolecular, macro- molecular and associated colloids
(a) Multimolecular colloids: The colloids
in which the colloidal particles consist of aggregates of atoms or small molecules are called multimolecular colloids .
For Example: gold sol, sulphur sol etc.
(b) Macromolecular colloids : The colloids in which large particles of colloidal range having high molecular masses are dissolved in a suitable liquid are called macromolecular colloids.
Example: proteins, starch and cellulose form macromolecular colloids.
(c) Associated colloids (Micelles): Those colloids which behave as normal strong electrolyte at low concentration but show colloidal properties at high concentration due to the formation of aggregated particles of colloidal dimension’s. Such substances are also referred to as associated colloids.
(iii) (a) Lyophillic colloids (solvent loving) are those substances that directly pass into the colloidal state when brought in contact with the solvent, e.g., proteins, starch, rubber, etc.
These sols are quite stable because of the strong attractive forces between the particles of dispersed phase and dispersion medium.
(b) Lyophobic colloids (solvent hating) are those substances that do not form the colloidal sol readily when mixed with the dispersion medium.
These sols are less stable than the lyophilic sols.

5.17. How do emulsifires stabilise emulsion? Name two emulsifiers.
Solution: The role of an emulsifier in stabilising an emulsion can be explained in two ways:
(a) It is believed that an emulsifier gets concentrated at the oil-water interface i.e., the surface at which oil and water come in contact with each other. It forms a protective coating around each drop of oil and thus, prevents the oil drop from coming in contact with one another. The oil drops remain suspended in water and are not coagulated.

(b) According to an another view, the role of the emulsifier is the sjame as that of lubricant in a machine. Just as a lubricant reduces the friction in the various parts of machine, an emulsifier also tries to reduce the interfacial tension between oil and water by suitable means. Thus, oil and water remain in company of each other and do not get separated. The commonly used emulsifying agents are soaps, detergents, lyophilic colloids, proteins, gums, gelatin, caesin, agar etc.

5.18. Action of soap is due to emulsification and micelle formation. Comment
Solution: Soap is sodium or potassium salt of a higher fatty acid and may be represented as RCOO–Na+ (e.g., sodium stearate CH3(CH2  )16 COO–Na+ which is a major component of many bar soaps). When dissolved in water, it dissociates into RCOO– and Na+ ions. The RCOO– ions, however, consist of two parts – a long hydrocarbon chain R (also called non-polar â€˜tail’) which is hydrophobic (water repelling), and a polar group COO– (also called polar- ionic â€˜head’), which is hydrophilic (water loving).
The RCOO– ions are, therefore, present on the surface with their COO–  groups in water and the hydrocarbon chains R staying away from it and remain at the surface. But at critical micelle concentration, the anions are pulled into the bulk of the solution and aggregate to form a spherical shape with their hydrocarbon chains pointing towards the centre of the sphere with COO– part remaining outward on the surface of the sphere. An aggregate thus formed is known as â€˜ionic micelle’.
The cleansing action of soap is due to the fact that soap molecules form micelle around the oil droplet in such a way that hydrophobic part of the stearate ions is in the oil droplet and hydrophilic part projects out of the grease droplet like the bristles. Since the polar groups can interact with water, the oil droplet surrounded by stearate ions is now pulled in Water and removed from the dirty surface. Thus soap helps in emulsification and washing away of oils and fats. The negatively charged sheath around the globules prevents them from coming together and forming aggregates. 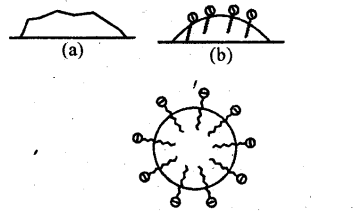 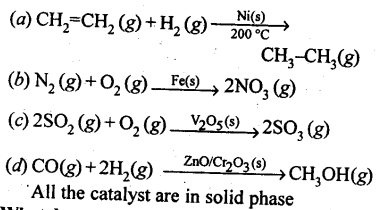 5.20. What do you mean by activity and selectivity of catalysts?
Solution: Important features of solid catalyst:
(a) Activity: The activity of a catalyst is its ability to accelerate chemical reactions. It depends upon the strength of chemisorption to a large extent.
The catalytic activity of a metal for hydrogenation increases as we move from Group 5 metals to Group 11. The maximum activity is shown by metals of Groups 7, 8 and 9.
(b) Selectivity: The selectivity of a catalyst is its ability to direct a reaction to yield a particular product. It mean a substance which acts as a catalyst in one reaction may not act as a catalyst in other reaction e.g., we get different products when we use different catalysts in the reaction between H2  and CO.