8.3. Which of the 3d series of the transition metals exhibits the largest number of oxidation states and why?
Ans:  Manganese (Z = 25) shows maximum number of O.S. This is because its outer EC is 3d54s2. As 3d and 4s are close in energy, it has maximum number of e-1  s to loose or share. Hence, it shows O.S. from +2 to +7 which is the maximum number. 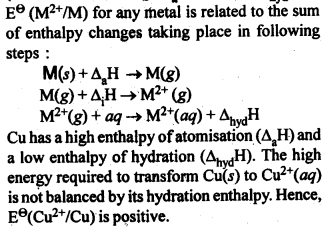 8.5. How would you account for the irregular variation of ionisation enthalpies (first and second) in the first series of the transition elements?
Ans:    There is a irregularity in the IE’s of 3d-series due to alternation of energies of 4s and 3d orbitals when an e-1 is removed. Thus, there is a reorganisation energy accompanying ionization. This results into release of exchange energy which increases as the number of e-1  s increases in the dn configuration. Cr has low 1st IE because loss of 1 e- gives stable EC (3d6). Zn has very high IE because e~ has to be removed from 4s orbital of the stable configuration (3d10 4s2) After the loss of one e–, removal of 2nd e–, becomes difficult. Hence, 2nd IE’s are higher and in general, increase from left to right. However, Cr and Cu show much higher values because 2nd e–  has to be removed from stable configuration of Cr+ (3d5) and Cu+ (3d10)

8.6. Why is the highest oxidation state of a metal exhibited in its oxide or fluoride only?
Ans:    Oxygen and fluorine have small size and high electronegativity. Hence, they can oxidise the metal to the highest O.S. 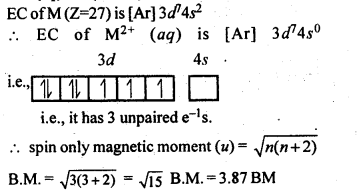 8.3 Explain briefly how+2 state becomes more and more stable in the first half of the first row transition elements with increasing atomic number?
Sol. Here after losing 2 electrons from j-orbitals, the 3d-orbital gets gradually occupied with increase in atomic number. Since the number of unpaired electrons in 3d orbital increases, the stability of the cations (M2+) increases from Sc2+ to Mn2+.

8.8 What are the characteristics of the transition . elements and why are they called transition elements? Which of the d-block elements may not be regarded as the transition elements?
Sol. General characteristics of transition elements.
(i) Electronic configuration – (n -1) d1-10 ns1-2
(ii) Metallic character – With the exceptions of Zn, Cd and Hg, they have typical metallic structures.
(iii) Atomic and ionic size-ions of same charge in a given series show progressive decrease in radius with increasing atomic number.
(iv) Oxidation state-Variable; ranging from+2 to +7.
(v) Paramagnetism – The ions with unpaired electrons are paramagnetic.
(vi) Ionisation enthalpy – Increases with increase in charge.
Formation of coloured ions – Due to presence of unpaired electrons.
(viii) Formation of complex compounds – Due to small size and high charge density of metal ions.
(ix) They possess catalj^c properties – Due to
their ability to adopt multiple oxidation states. .
(x) Formation of interstitial compounds.
(xi) Alloy formation.
They are called transition elements due to their incompletely filled d-orbitals in ground state or in any stable oxidation state and they are placed between s and p- block elements. Zn, Cd and Hg have fully filled d- orbitals in their ground state hence may not be regarded as the transition elements.

where n – number of unpaired electrons.
(ii) Because of large number of unpaired electrons in d-orbitals of their atoms they have stronger interatomic intefactions and hence stronger metallic bonding between atoms resulting in higher enthalpies of atomisation.
(iii) Formation of coloured compounds (both in solid state as well as in aqueous solution) is another very common characteristics of  transition metals. This is due to absorption of some radiation from visible light to cause d-d transition of electrons in transition metal atom. The d-orbitals do not have same energy and under the influence of ligands, the d-orbitals split into two sets of orbitals having different energies; transition of electrons can take place from one set of d-orbitals to another set within the same sub-shell. Such transitions are called d-d transitions. The energy difference for these d-d transitions fall in the visible region. When white light is incident on compounds of transition metals, they absorb a particular frequency and remaining colours are emitted imparting a characteristic colour to the complex. Zn2+ and Ti4+ salts are white because they do not absorb any radiation in visible region.
(iv)Catalytic properties: Many of transition metals and their compounds act as catalyst in variety of reactions, e.g., finely divided iron in manufacture of NH3 by Haber’s process, V2O5 or Pt in manufacture of H2S04 by Contact process, etc.). The catalytic activity is due to following two reasons.
(a)The ability of transition metal ion to pass ” easily from one oxidation state to another
and thus providing a new path to reaction with lower activation energy.
(b)The surface of transition metal acts as very good adsorbent and thus provides increased concentration of reactants on their surface causing the reaction to occur.

The yellow solution of sodium chromate is filtered and acidified with sulphuric acid to give a solution from which orange sodium dichromate, Na2Cr,07.2H20 can be crystallised.

8.15 Describe the oxidising action of potassium dichromate and write the ionic equations for its reaction with:
(i)iodide
(ii)iron (II) solution and
(iii)H2S
Sol. K2Gr207is a powerful oxidising agent. In dilute sulphuric acid medium the oxidation state of Cr changes from+6 to + 3. The oxidising action can be represented as follows: 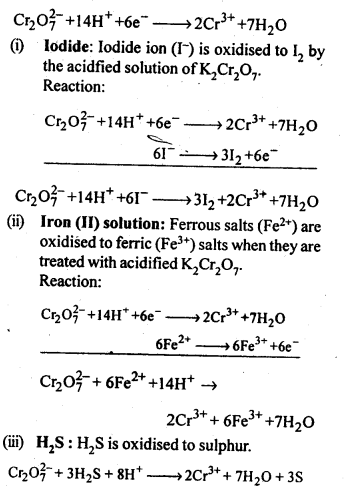 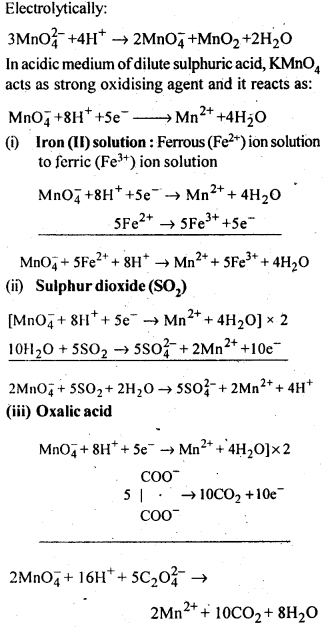 8.18 Predict which of the following will be coloured in aqueous solution? Ti3+, V3+,Cu+, Sc3+, Mn2+, Fe3+ and Co2+ Give reasons for each.
Sol. Among the above mentioned ions, Ti3+, V3+, Mn2+ , Fe3+ and Co2+ are coloured. These ions are coloured due to presence of unpaired electrons, they can undergo d-d transitions

8.19 Compare the stability of +2 oxidation state for the elements of the first transition series.
Sol. In general, the stability of +2 oxidation state in first transition series decreases from left to right due to increase in the sum of first and second ionisation energies. However Mn2+ is more stable due to half filled d-orbitals (3d5) and Zn2+ is more stable due to completely filled d-orbitals (3d10).

8.20 Compare the chemistry of actinoids with that of the lanthanoids with special reference to
(i)electronic configuration,
(ii)atomic and ionic sizes and
(iii)oxidation state
(iv)chemical reactivity.
Sol. (i) Electronic configuration: The general electronic configuration of lanthanoids is [Xe]54 4f1-14  5d0-1   6s2 and that of actinoids is [Rn]86 5f0-14 6d0-1   7s2, lanthanoids . belong to 4 f series whereas actinoids belong to 5f-series.
(ii) Atomic and ionic sizes: Both lanthanoids and actinoids show decrease in size of their atoms or ions in + 3 oxidation state as we go from left to right. In lanthanoids, the decrease is called lanthanoid contraction whereas in actinoids, it is called actinoid contraction. The contratibn is greater from element to element in actinodes due to poorer shielding by 5f electrons.
(iii)Oxidation state: Lanthanoids show limited oxidation states (+ 2, + 3, + 4) out of which + 3 is most common whereas actinoids show +3, +4, +5, +6, +7 oxidation states.This is because of large energy gap between 4f 5d and 6s orbitals. However, actinoids show a large number of oxidation states because of small energy ap- between 5f 6d and Is orbitals.
(iv) Chemical reactivity: The earlier members
of the lanthanoids series are quite reactive similar to calcium but, with increase in atomic number, they behave more like aluminium. The metals combine with hydrogen when . gently heated in the gas. Carbides, Ln3C,  Ln2C3 and LnC2 are formed when the metals are heated with carbon. They liberate hydrogen from dilute acid and burn in halogens to form halides. They form oxides M203 and hydroxides M(OH)3.
Actinoids are highly reactive metals, especially when finely divided. The action of boiling water on them gives a mixture of oxide and hydride and combination with most non-metals take place at moderate temperatures. HCl attacks all metals but most are slightly affected by nitric acid owing to the formation of protective oxide layers, alkalis have no action. Actinoids are more reactive than lanthanoids due to bigger atomic size and lower ionisation energy.

8.21 How would you account for the following:
(i) Of the d4 species, Cr2+ is strongly reducing while manganese (III) is strongly oxidizing.
(ii) Cobalt (II) is stable in aqueous solution but in the presence of complexing reagents it is easily oxidised.
(iii) The d1  configuration is very unstable in ions.
Sol. (i) E ° value for Cr3+/Cr2+ is negative (-0-41 V) whereas E ° values for Mn3+/Mn2+is positive (+1.57 V). Hence, Cr2+ ion can easily undergo oxidation to give Cr3+ ion and, therefore, act as strong reducing agent whereas Mn3+ can easily undergo’ reduction to give Mn2+ and hence act as an oxidizing agent.
(ii) Co (III) has .greater tendency to form coordination complexes than Co (II). Hence, in the presence of ligands, Co (II) changes to Co (III), i.e., is easily oxidized.
(iii) The ions with dx configuration have the tendency to lose the only electron present in d-subshell to acquire stable d ° configuration. Hence, they are unstable and undergo oxidation or disproportionation.

8.26 Indicate the steps in the preparation of:
(i)K2Cr207from chromite ore
(ii)KMn04 from pyrolusite ore.
Sol. 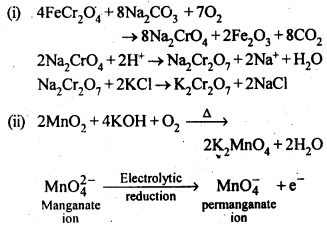 8.31 Use Hund’s rule to derive the electronic configuration of Ce3+ ion, and calculate its magnetic moment on the basis of â€˜spin-only’ formula.
Sol.

8.35 Com pare the general characteristics of the first series of the transition metals with those of the second and third series metals in the respective vertical columns. Give special emphasis on the following points:
(i)electronic configurations
(ii)oxidation states
(iii)ionisation enthalpies and
(iv)atomic sizes
Sol. (i) Electronic configuration: The elements in the same vertical column generally have similar electronic configuration. First transition series shows only two exceptions, i.e., Cr = 3d5   4s1   and Cu = 3d10 4s1. But second transition series shows more exceptions, i.e., Y = 4d1  5s2, Nb = 4d1  , 5s1  , Mo=4d5   5s1  , Ru=4d1   5s1  , Rh=4d8   5s1  , Pd , =4d10  5s °, Ag=4d10  5s1  . In third transition, there are two exceptions, i.eâ€ž Pt = 5d9   6s1   and Au = 5d10  6s1  .
Thus in the same vertical column, in a number of cases, the electronic configuration of the elements of three series are not similar.
(ii) Oxidation states: The elements in the same vertical column generally show similar oxidation states. The number of oxidation states shown by the elements in the middle of each series is maximum and minimum at the extreme ends.
(iii)Ionization enthalpies: The first ionization enthalpies in each series generally increases gradually as we more from left to right though some exceptions are observed in each series. The first ionization enthalpies of some elements in the second (4d) series are higher while some of them have lower value than the elements of 3d series in the same vertical column. However, the first ionization enthalpies of third (5d) series are higher than those of 3d and Ad series. This is because of weak shielding of nucleus by 4f-electrons in the 5d series.
(iv)Atomic sizes: In general, ions of the same charge or atoms in a given series show progressively decrease in radius with increasing atomic number though the decrease is quite small. But the size of the atoms of the Ad series is larger then the corresponding elements of the 3d series whereas size of elements of the 5d-series nearly the same as those of Ad series because of lanthanoid contraction. 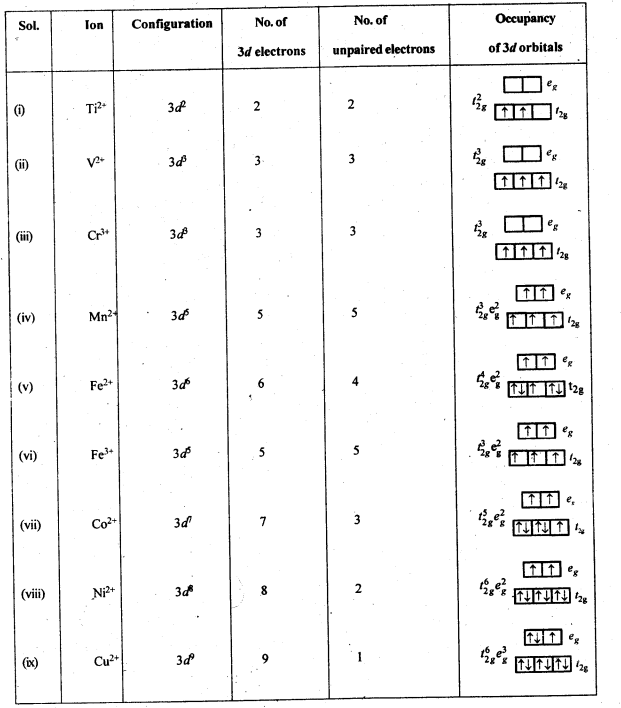 8.38 What can be inferred from the magnetic moment values of the following complex species? 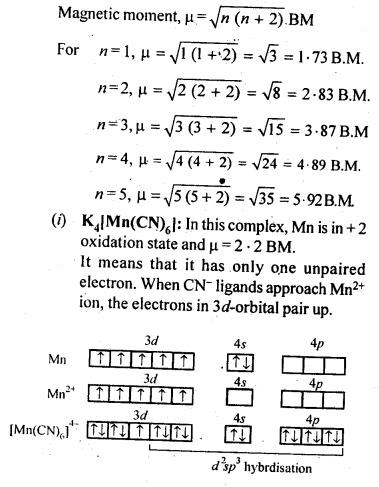 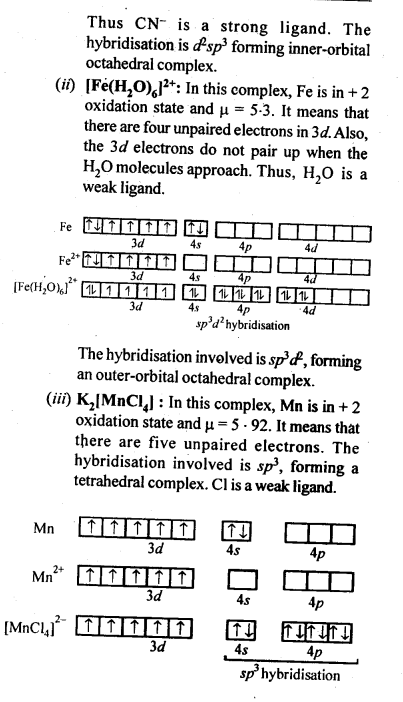