1.List the items of food available to people in Harappan cities. Identify the groups who would have provided these.
Ans.

2.How do archaeologists trace socio-economic differences in Harappan society? What are the differences that they notice? [Delhi, All India 2009, 2011]
Ans. Following examples can be cited to show the existence of social and economic variations : in the Harappan society:
(i)Study of burials is one example. In the Harappan sites, the deads were usually laid in pits. There were differences in the Way burial pits were made. At some instances, the hollowed-out spaces were lined with bricks. But these may not be taken as an indication of social differences.
(ii)In some graves pottery and ornaments have been found. Jewellery has been found from the graves of men and women as well. These findings can point out social and economic differences. ‘
(iii)The artefacts have been classified into two categories, Utilitarian and Luxurious. Objects of daily uses and objects made of ordinary materials made of clay or stone come under utilitarian category. Ordinary articles consisted of querns, pottery, flesh-rubbers and needles. These have been found distributed throughout settlements.
(iv)Objects of luxuries were rare and made from precious, non-local materials. The technology used was advanced and complicated. Little pots of faience were considered precious. They were also not easy to make. These show the existence of social and economic variations in the Harappan society.

3. Would you agree that the drainage system in Harappan cities indicates town planning? Give reasons for your answer.
Ans. Yes, I agree with that the drainage system in Harappan cities which indicates the town planning. I can cite the following reasons in support of my answer.
•The drainage system needed a planning for its execution. It seems that first drainages were laid out and then houses were built along with the drains. Every house was supposed to have at least one wall along a street to allow the domestic waste water to flow out in the street drains. The plans of the lower town show that roads and streets were laid out along an approximate grid pattern, intersecting at right angles.
•It appears that human settlement was made by planning from the beginning. The city was restricted to a fixed area on the platforms.
•Bricks, sundried or baked, were of standard ratio. The length and breadth of bricks were of four times and twice the height respectively These bricks were used at all the settlements of the Harappan Civilisation.

4. List the materials used to make beads in the Harappan Civilisation. Describe the process by which any one kind of bead was made.
Ans. Making beads was an important craft of the Harappan people. It was mainly prevalent in Chanhudaro.

Materials for making beads included beautiful red coloured stone-like camelian, jasper, crystal, quartz and steatite. Besides these, use of copper, bronze, gold, shell, faience, terracotta or burnt clay was also used.Process of making beads Making of beads differed as per the materials used. Beads had variety*of shapes. They did not make geometrical shapes like one made of harder stones.
Nodules were to be chipped for making rough shapes. They were finally flaked into the final form.
By firing the yellowish raw material, the red colour of camelian was obtained. Grinding, polishing and drilling constituted the last phase. Chanhudaro, Lothal and Dholavira were famous for specialized drilling.

5.Look at figure 1.30 (See NCERT page-26) and describe what you see. How is the body placed? What are the objects placed near it? Are there any artefacts on the body? Do these indicate the sex of the skeleton?
Ans. Following observations can be obtained after looking at the figure:
•Body has been kept in North-south direction in a pit,
•Many graves contain pottery and ornaments which include jar.
•Yes, jewellery like bangles are there on the body.
•Yes, this indicates towards the sex of the skeleton, Le. it is the body of a woman.
It is concluded that there were great social or economic differences among the people living within the area of the Harappan Civilisation. But as a whole it appears that the Harappan did not believe in burying precious things with the dead.

6.Describe some ofthe distinctive features of Mohenjodaro. [Delhi 2013]
Ans. Planned City: Harappa as a planned urban centre. It had two parts. One part of the city was small. It was built on a higher place. 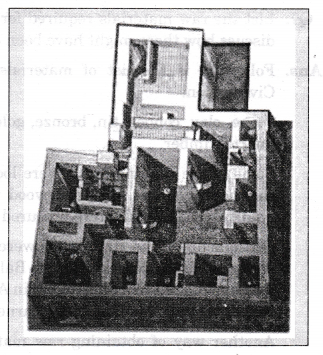 The second part was comparatively large. It was built on a lower place. The first part was designed as citadel and the second part was as lower town. The citadel owed its height to the fact that it was built on mud brick platforms.It had walls on all sides and these walls were separated from the lower town.The Lower Town: It was also a walled town.Most of the buildings were built on platforms.
In fact, these platforms were considered as foundation stones. It required huge quantity of labour force to build these platforms. It is obvious that settlement was first planned and then implemented as per the building plan.Quality of sun-dried bricks or baked bricks also prove the concept of planning.
All the bricks were of standard ratio. The length and width was four times and twice the height of the bricks respectively. These bricks were used in the settlements of the Harappan Civilisation.
Drainage System: The drainage system was well planned. All the roads and streets were laid out on a grid pattern. They intersected one another at the right angles. It seems that streets featuring drains were laid out first and houses were built thereafter along with them. To make the flow of domestic water, every house had at least one wall along the street.
The Citadel: There were many buildings in the citadel. These buildings were used for many special public purposes. The Warehouse and the Great Bath were the two most important constructions. 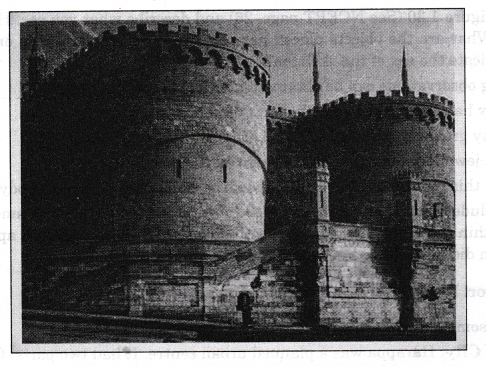 7.List the raw materials required for craft production in the Harappan Civilisation and discuss how these might have been obtained.
Ans. Following is the list of materials required for craft production in the Harappan Civilisation:
Stone, clay, copper, tin, bronze, gold, faience, shell, camelian, jasper, crystal, steatite, quartz, timber.
Some of the raw materials were locally available whereas some were purchased from the distant places. Soil and wood were locally available raw materials. Stones, fine quality wood, metals were procured from distant places.
Settlements of the Harappans were situated at such places where raw materials were easily available. Nageshwar and Balacot were famous for shell. Some places were famous for Lapis Lazuli like Shortughai in Afghanistan. Rajasthan and Gujarat were famous for copper. Lothal was famous for camelian.
Another way of obtaining raw material was sending expeditions to different places.
Evidences show that expedition was sent to Khetri region of Rajasthan for copper and to South India for Gold. Through these expeditions local communities were contacted. Harappan evidences found at these places indicate contacts between each other. Evidences found at Khetri region were given the name of Ganeshwar Jodhpura Culture by archaeologists. Huge reserves of copper products were found here. It is assumed that inhabitants of these area sent copper to Harappan people.

8.Discuss, how archaeologists reconstruct the past.
Ans. Archaeologists excavate the sites of the ancient past related to culture or civilization. They find out the art and craft such as seal, material, remains of houses, buildings, pots, ornaments, tools, coins, weights, measurements and toys, etc.
Skulls, bones, jaws, teeth of the dead bodies and materials kept with these dead bodies are also helpful for archaeologists. With the help of the botanists, and zoologists, archaeologists study the plants and animal bones found at different places.
Archaeologists try to find out the tools used in the process of cultivation and harvesting. They also try to find out traces of wells, canals, tanks, etc. as they served means of irrigation.
Different layers of sites are observed to find out different things. These things give the picture of socio-economic condition such as religious life and the cultural life of the people. .
Tools, unfinished products, waste materials, help in identifying the centres of craft production. Indirect evidences also help the archaeologists in reconstructing the past.
Archaeologists develop frames of references, It can be better understood by this fact that the first Harappan seal that was found could not be understood till archaeologists had a context in which to place it-both in terms of cultural sequence in which it was found and in terms of a comparison with finds in Mesopotamia.
Examination of seals help in constructing the concept of religious belief of the period. Seals depict religious scenes. Some animals such as the one-homed animal, often called the unicorn depicted on the seals appear mythical, composite creatures. In some seals, a figure has been shown sitting crossed legs in a yogic posture. All these represent the religious concept of the period.

9. Discuss the functions that may have been performed by rulers in Harappan society.
Ans. There are different views on the Harappan society. One group of archaeologists suggest that the Harappan society had no rulers and so everybody enjoyed equal status. The other group of archaeologists are of the opinion that there was no single ruler but several ones. The third theory seems the most suitable. It suggests that it is unlikely that entire communities could have collectively made and implemented such complex decisions.
Evidences show that complex decisions were taken and implemented in the Harappan society. Extra ordinary uniformity of Harappan artefacts as evident in pottery, seals, weights and bricks show the complex decisions.
Plans and layouts of the city were prepared under the guidance and supervisions of the rulers. Big buildings, palaces, forts, tanks, wells, canals and granaries were constructed.
Cleanliness was the responsibility of the ruler. Roads, lanes and drains were also constructed.
The rulers also looked after the welfare of the economy. They hsed to inspire the farmers to increase agricultural production. They also motivated the craftsmen to promote different handicrafts. External and internal trade were both promoted by the ruler. The ruler used to issue common acceptable coins or seals, weights and measurements.
Rulers were expected to provide relief during natural calamity. During flood, earthquake, epidemics, the ruler provided grains and other eatables to the affected people. During foreign aggression, the rulers defended the city. 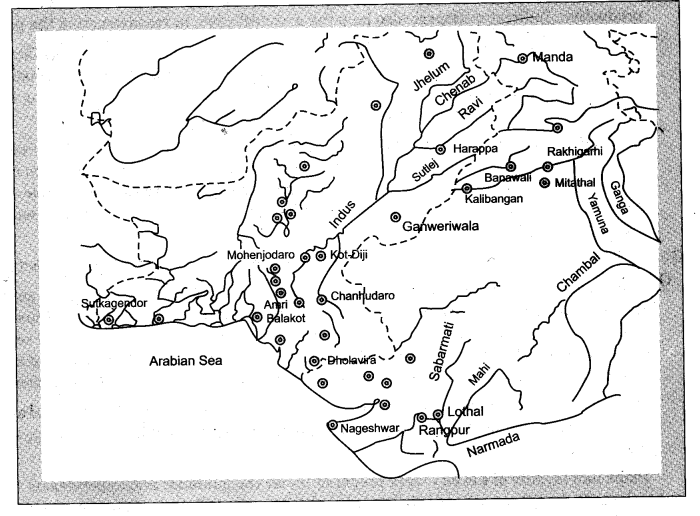