3.Explain why the bulb would not glow in the arrangement shown in fig

Ans:  The bulb would not glow in the arrangement shown in figure because the one end of tester/screw driver is made up of plastic which does not allow the electric current to flow through it.

4. Complete the drawing shown in Fig. 12.9 to indicate where the free ends of the two wires should be joined to make the bulb glow. 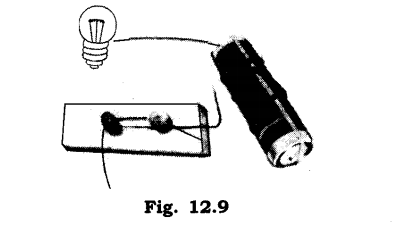 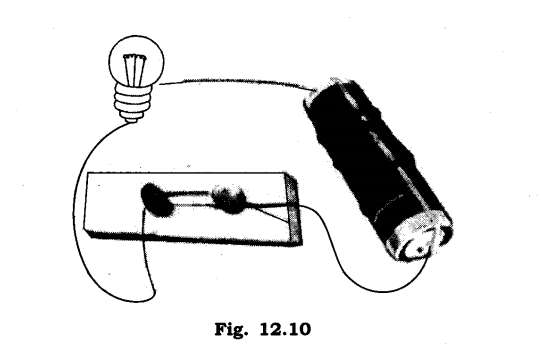 5. What is the purpose of using an electric switch? Name some electrical gadgets that have switches built into them.
Ans: Electric switch is used to make electric circuit open or closed for a particular appliance and hence with the help of a switch we can use an appliance according

6. Would the bulb glow after completing the circuit shown in Fig. 12.9 if instead of safety pin we use an eraser?
Ans:  No, since eraser is an insulator so it does not allow the current to pass. Hence the bulb will not glow.

Ans:  Yes, the electric circuit is closed so the bulb will glow.

VERY SHORT ANSWER TYPE QUESTIONS
1. What is the direction of flow of current in a dry cell?
Ans: . The current flows in closed circuit from +ve to -ve terminal of cell.

2. Name the +ve terminal of dry cell.
Ans:. Carbon rod with a metal cap on it.

4. What is dry cell?
Ans:    It is a device which converts chemical energy into electrical energy.

5. What is solar cell?
Ans:  A device which converts solar energy into electrical energy.

6. What is open circuit?
Ans:    An electric circuit in which electrical contact at any point is broken is called open circuit.

7. Write one use of insulators.
Ans:  Insulators are used in making switchboard, handles of testers, screw drivers.

8. What is the name of thin wire in the electric bulb?
Ans:  Filament.

SHORT ANSWER TYPE QUESTIONS
1. Mention two advantages of a dry cell.
Ans:
1. It converts chemical energy into electrical energy.
2. It is light and small in size.

2. Draw a diagram showing the two terminals of a bulb.
Ans: 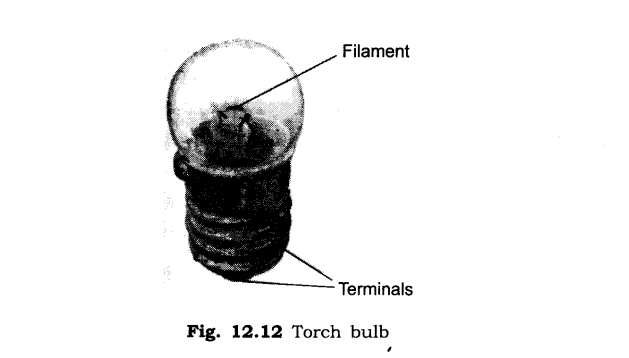 3. Draw the circuit diagram for operating a bulb with the help of a dry cell.
Ans: 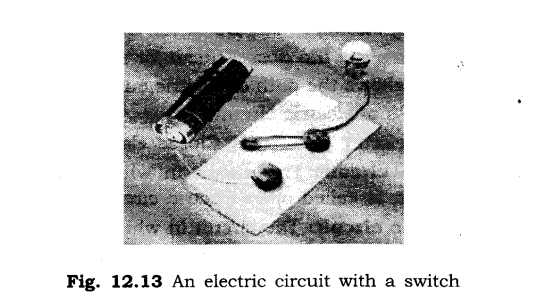 8. In any electric circuit, when the switch is on and the current flows through it why do the wire, switches, bulb or devices become hot?
Ans.: This is because electric energy changes into heat energy.

9.The headlights of a car have reflectors behind the bulb. What is the function of reflectors?
Ans:  The reflector helps in reflecting the light into a focussed area.

10.If you touch an electric wire carrying current you get a shock, but if on the same wire the birds sit they do not get any shock/current. Explain why?
Ans:  When we hold the wire carrying current then the circuit is closed and the current flows from our body and enters earth but the birds sitting on the same wire do not get any current as the circuit is not complete. If the bird touches the earth wire, it will also die due to electric shock. 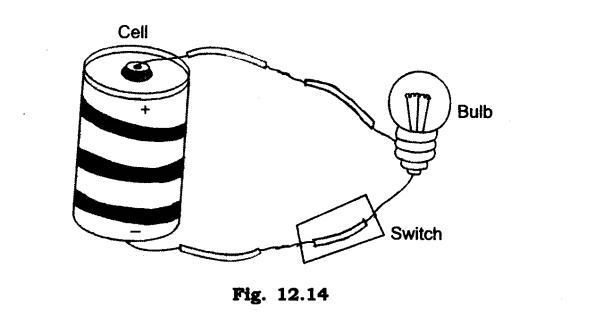