3. Which of the following statements are “true”?
(a) Water vapour is present in air only during the monsoon.
(b) Water evaporates into air from oceans, rivers and lakes but not from the soil.
(c) The process of water changing into its vapour is called evaporation.
(d) The evaporation of water takes place only in sunlight.
(e) Water vapour condenses to form tiny droplets of water in the upper layers of air where it is cooler.
Ans:
(a) False
(b) False
(c) True
(d) False
(e) True.

4. Suppose you want to dry your school uniform quickly. Would spreading it near an anghiti or heater help you? If yes, how?
Ans:  Yes, to dry the school uniform quickly, the uniform is spread near an anghiti or heater because evaporation is rapid at higher temperature. Higher the temperature faster is the rate of evaporation. So the uniform is dried up quickly.

5. Take out a cooled bottle of water from refrigerator and keep it on a table. After some time you notice a puddle of water around it. Why?
Ans:  The cooled water bottle has very cold exposed surface. Due to cool surface there is condensation of water-vapour from air on the surface of water bottle because water vapour is present in atmosphere. The condensed water molecules spread around the bottle. So a puddle of water is noticed after sometime.

6.To clean their spectacles, people often breathe out on glasses to make them wet. Explain why the glasses become wet?
Ans:  The breathe out gases contain water-vapour. The water-vapour condenses at spectacles so glass becomes wet and with the help of small amount of water, it is easy to clean the spectacles.

8. When does a drought occur?
Ans:  If there is no rain for a long period or for many years then there is scarcity of water in that region. This leads to drought.

4. How are the clouds formed?
Ans:  Clouds are formed by the condensation of water vapour at high altitude.

2. Why is ocean water not suitable for domestic use?
Ans:  Sea and ocean water contains large amounts of various salts. It is due to these salts the ocean water is salty and cannot be used for drinking, washing and for irrigation purposes. 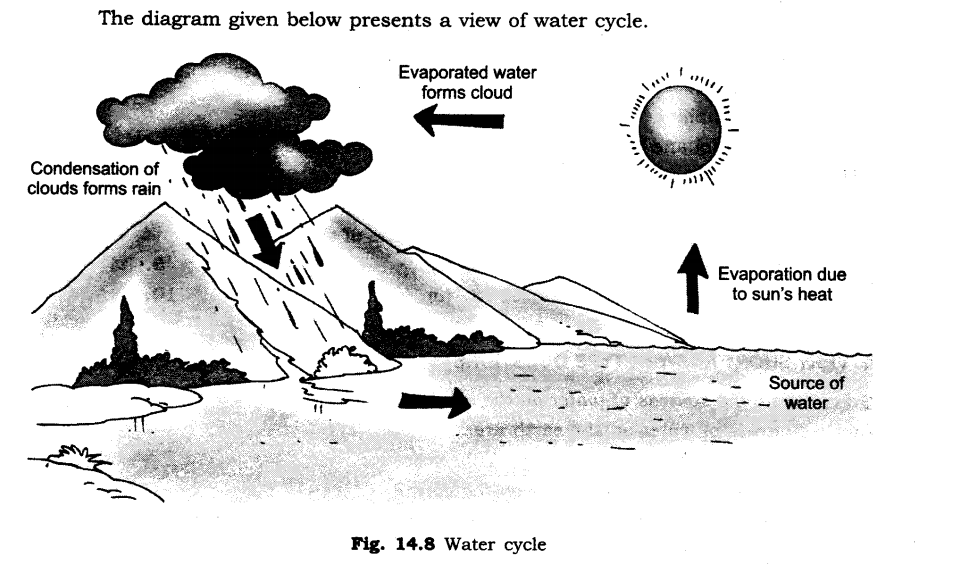 4. How does heavy rain affect us?
Ans:  Heavy rains may cause:
1. A rise of water level in dams, rivers, lakes, etc.
2. Waterlogging and floods.
3. Floods cause damage to property, crops and animals.

6. Name two processes responsible for the formation of clouds.
Ans:    Evaporation and transpiration.

8. During winters why do we see more fog in close areas where there are lots of .trees?
Ans:    Due to lots of trees, air at that place contains much more water vapour during  winters. These vapour condense on dust or smoke particles forming thick fog.