Q.1. Mark ‘T’ if the statement is true and ‘F’ if it is false:
(a) The freshwater stored in the ground is much more than that present in the rivers and lakes of the world. (T/F)
(b) Water shortage is a problem faced only by people living in rural areas. (T/F)
(c) Water from rivers is the only source for irrigation in the fields. (T/F)
(d) Rain is the ultimate source of water. (T/F)

Q.2. Explain how groundwater is recharged.
Ans. The groundwater gets recharged through the process of infiltration. Infiltration means seeping of water from rivers and lakes into the empty spaces and cracks deep below the ground.

Q.4.You have been asked to maintain a garden. How will you minimise the use of water? â€ž
Ans.To minimise the wastage of water we will use the drip irrigation which throws the water at the base of plants. We will check the leakages in the water pipes and arrange small pits for rainwater harvesting. The collected rainwater will be used later.

Q.6.Fill in the blanks with the appropriate answers: .
(a) People obtain groundwater through and .
(b) Three forms of water are solid, and .
(c) The water bearing layer of the earth is .
(d) The process of water seepage into the ground is called .
Ans.(a) wells, hand pumps
(b) liquid, gas
(c) aquifer
(d) infiltration

Q.7.Which one of the following is not responsible for water shortage?
(i) Rapid growth of industries
(ii) Increasing population
(iii) Heavy rainfall
(iv) Mismanagement of water resources
Ans.(iii) heavy rainfall 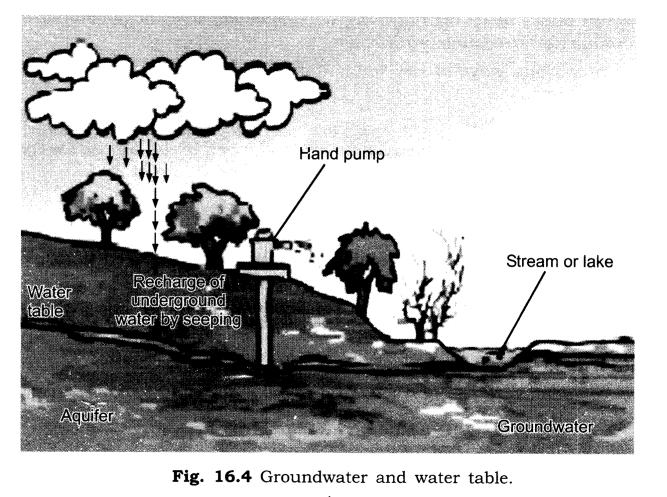