Question  1. Answer the following questions briefly:
(i)  Why do the plated move?
(ii)  What are exogenic and endogenic force?
(iii) What is erosion?
(iv) How are flood plains formed?
(v) What are sand dunes?
(vi) How are beaches formed?
(vii) What are ox-bow lakes?
Answer:    (i) The plates move because of the movement of the molten magma inside the earth.
(ii) Exogenic forces. The forces that work on the surface of the earth are called as exogenic forces.
Endogenic forces. The forces that act in the interior of the earth are called as endogenic forces.
(iii) Erosion is the wearing away of the landscape by different agents like water, wind and ice.
(iv) During floods, layers of fine soil and other material called sediments are deposited on the river bank. This leads to the formation of a flat fertile flood plains.
(v) Sand dunes are low hill-like structures formed by the deposition of sand in the deserts.
(vi) Beaches are formed when the sea waves deposit sediments along the shores of the sea.
(vii) When the meander loop is cut off from the main river, it forms a cut-off lake. As its shape is like an ox bow, it is also known as ox-bow lake.

Question  4. Give reasons:
(i) Some rocks have a shape of a mushroom.
(ii) Flood plains are very fertile.
(iii) Sea caves are turned into stacks.
(iv) Buddings collapse due to earthquakes.
Answer:    (i) In deserts, winds usually erode the lower section of the rock more than the upper part. Therefore, such rocks have narrower base and wider top, which take the shape of a mushroom.
(ii) Flood plains are formed by the deposition of fine soil and other material called sediments on the river banks. As the soil and sediments are brought by flood water, they are very fertile.
(iii) Sea waves strike at the rocks. As a result cracks develop which become bigger over time and hollow like caves are formed on the rocks. They are called sea caves. These cavities become bigger and bigger and a time comes when only the roof of the caves remain to form sea arches. Further erosion breaks the roof and only walls are left. These wall like features are called stacks. In this way, sea caves are turned into stacks.
(iv) Most of the buildings are not safe enough to resist the vibrations of the earthquakes. They are not made earthquake-proof. They collapse tearing apart due to shallow foundation and lack of adequate steel in the interior design.

Question  5. Activity
Observe the photographs given below. These are various features made by a river. Identify them and also tell whether they are erosional or depositional or landforms formed by both. 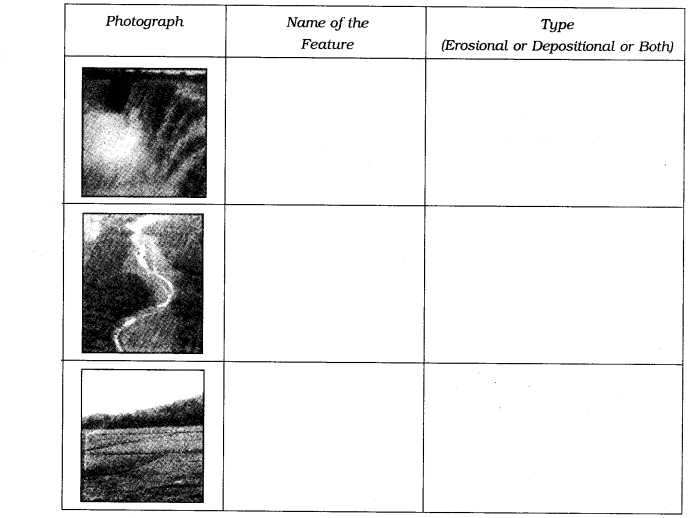 Question  1    What do you know about the lithospheric plates?
Answer:  The earth’s crust consists of several large and some small, rigid, irregularlyâ€” shaped plates, Le., slabs which cany continents and the ocean floor.

Question  2. How do the lithospheric plates move?
Answer:    They move around very slowly, just a few millimeters each year.

Question  3. What is a volcano?
Answer:    A volcano is a vent or opening in the earth’s crust through which molten material erupts suddenly.

Question  6.  What is a seismograph? [V. Imp.]
Answer:    A seismograph is a machine which measures an earthquake.

Question  7.  Name the scale on which the magnitude of the earthquake is measured.
Answer:  Richter scale.

Question  10. What is a delta?
Answer:  The collection of sediments from all the mouths forms a delta. It is triangular shaped landmass.

Question  13. Name the two processes which wear away the landscape.
Answer:  Weathering and erosion.

Question  1. Mention the work of ice.
Answer:    Glaciers are rivers of ice which erode the landscape by destroying soil and stones to expose the solid rock below. Glaciers carve out deep hollows. As the ice melts they get filled up with water and become beautiful lakes in the mountains. The material carried by the glacier such as rocks big and small, sand and silt gets deposited. These deposits form glacial moraines.

Question   3.  Give an account of earthquake preparedness.            [V. Imp.]
Answer:    Earthquake is a natural calamity which we cannot stop. But we can minimise its impact if we are prepared before-hand.
During an earthquake, we should shift to some safe spot. We should hide under a kitchen counter, table or desk against an inside comer or wall. We should stay away from fire places, areas around chimneys, windows that shelter including mirrors and picture frames. Moreover, we should spread awareness amongst our friends and family members.

Question  1.  Explain the work of a river.                [V. Imp.]
Answer:    The running water in the river erodes the landscape. When the river tumbles at steep angle over very hard rocks or down a deep valley side it forms a waterfall. While entering the plain the river twists and turns and forms large bends which are known as meanders. Due to continuous erosion and deposition along the sides of the meander, the ends of the meander loop come closer and closer. In -due course of time the meander loop cuts off from the river and forms a cut-off lake, which is also called ox-bow lake. Sometimes, the river overflows its banks causing flood in the neighboring areas. As it floods, it deposits layers of fine soil and other material called sediments along its banks. As a resultâ€”fertile floodplain is formed. The raised banks are called levees.
As the river approaches the sea, the speed of the flowing water decreases and the river begins to break up into several streams known as distributaries. Then a time comes when the river becomes very slow and it begins to deposit its load. Each distributary forms its own mouth. The collection of sediments from all the mouths forms a delta, which is a triangular landmass.

Question  2. Give an account of the work of wind. [V. Imp.]
Answer:    Wind is an active agent of erosion and deposition in the deserts. In deserts we often notice rocks in the shape of a mushroom, known as mushroom rocks. Winds erode the lower section of the rock more than the upper part. Therefore, such rocks have narrower base and wider top. When the wind blows, it lifts and transports sand from one place to another. When the wind stops blowing the sand falls and gets deposited in low hill-like structures. These are called sand dunes. When the grains are very fine and light, the wind can carry it over long distances. When such sand is deposited in large area, it is called loess.