1. What is a gene? [Delhi]
Answer. Gene is the unit of inheritance. Gene is the part of a chromosome which controls the appearance of a set of hereditary characteristics.

2. What is meant by analogous organs? Taking a suitable example, explain how they support the theory of Organic Evolution. [Delhi]
Answer. Analogous organs are those organs which I have different basic structural design and developmental origin but have similar appearance and perform similar functions.
Example: The wings of birds and bats look similar but have different design in their structure. They have a common function of flying but their origins are not common. So, birds and bats are not closely related.

3. What is a sex chromosome? [Foreign]
Answer. Sex chromosome is a chromosome that operates in the sex-determining mechanism of a species. Many animals have two different types of sex chromosomes. For example, in human there is a large X chromosome and a much smaller Y chromosome.

8. What are fossils? What do they tell us about the process of evolution? [All India(C): All India 2011]
Answer. The remains of dead plants and animals which were buried under the rocks millions of years ago are called fossils.
Fossils tell us about the process of evolution. The fossils of different organisms have some features similar to one species while some features are similar to the other species. In this way, they show the link between two species. They tell us that one species evolves from the other.

15. What evidence do we have for the origin of life from inanimate matter? [All India]
Answer. Stanley L. Miller and Harold C. Urey provided evidence regarding origin of life from inanimate matter. They assembled an atmosphere similar to that existed on early earth. The atmosphere had molecules like ammonia, methane and hydrogen sulphide, but no oxygen and kept over water at temperature just below 100 °C. Sparks were passed through the mixture of gases. At the end of a week, 15% carbon from methane had been converted to simple compounds of carbon like amino acids which make-up protein molecules. So, life arose afresh on earth.

16. Explain the terms: (i) Speciation (ii) Natural selection [Delhi]
Answer. (i) Speciation is the evolution of reproductive isolation among once-interbreeding populations, i.e. the development of one or more species from an existing species.
(ii) Natural selection is the process, according to Darwin, which brings about the evolution of new species of animals and plants.

17. Explain with examples how the following are evidences in favour of evolution in organisms.  (i) Homologous organs (ii) Analogous organs (iii) Fossils [Delhi]
Answer. (i) Forelimb of human and bird are homologous organs. They have same structural design and developmental origin but they have different functions and appearance. Homologous organs help us to understand that the organism has evolved from a common ancestor. The more common characteristics the two species have, the more closely they are related.
(ii) Analogous organs are those organs design and developmental origin but have similar appearance and perform similar functions.
Example: The wings of birds and bats look similar but have different design in their structure. They have a common function of flying but their origins are not common. So, birds and bats are not closely related.
(iii) Fossils and their study is useful in knowing about the species which are no longer alive. They provide evidence and missing links between two classes. They are helpful in forming a sequence of organisms in the pathway of evolution. Thus, fossils have an importance in deciding evolutionary relationship. Archaeopteryx is a fossil bird. It had feathers, fused bones and beak which are exclusively bird structures. It also had some features which are found in reptiles, e.g. teeth in jaw, claws on free fingers and a long tail. This fossil provides a clue that birds have evolved from reptiles.

18. Give an example of body characteristics used to determine how close two species are in terms of evolution and explain it. [All India]
Answer. Homologous organs help to identify the relationship between organisms. These characteristics in different organisms would be similar because they have inherited from a common ancestor. For example, forelimbs of human and wings of birds show closeness between the two species because the organs have similar basic structural design of limbs though it has been modified to perform different functions.

19. What are homologous organs? Can the wing of a butterfly and the wing of a bat be regarded as homologous? Why? [All India]
Answer. Homologous organs are those organs which have the same basic structural design and developmental origin but have different functions and appearance.
Example: The forelimb of a frog, a lizard, a bird and a man seem to be built from the same basic design of bones, but they perform different functions. 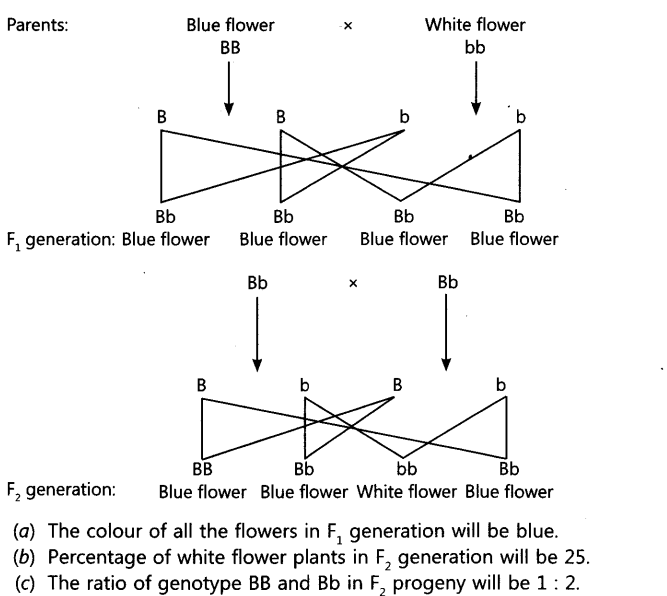 22. Distinguish between homologous organs and analogous organs. In which category ; would you place wings of a bird and wings of a bat? Justify your answer giving a suitable reason.[Delhi]
Answer.

Wings of a bird and wings of a bat are analogous organs as they have different basic structural design but have similar appearance and perform similar functions.

23. Define the term ‘evolution’. “Evolution cannot be equated with progress”. Justify this statement. [Delhi]
Answer. Evolution is the sequence of gradual change which takes place in primitive organisms over millions of years and new organisms are formed. Evolution cannot be equated to progress from lower forms to higher forms. It seems to have given rise to more complex body designs even while the simpler body designs continue to flourish. For example, human beings have not evolved from chimpanzees, but both have common ancestor.

25. How are fossils formed? Describe, in brief, two methods of determining the age of fossils. [All India]
Answer. When organisms die, their bodies decompose due to action of micro organisms. However, sometime the body or at least some parts of the body may be in such an environment that does not let it decompose completely. All such preserved traces of living organisms are called fossils.
The age of fossils can be estimated by the following two methods:

27.”An individual cannot pass on to its progeny the experiences of its lifetime.” Justify the statement with the help of an example and also give reason for the same. [Foreign]
Answer. Experience achieved during the lifetime of an individual does not make any change in the gene of the individual.
For example, if a person reads a book on birds, the knowledge he earns by reading the book does not make any change in the gene, hence, this knowledge will not get automatically transmitted to his next generation. Such a trait is called acquired trait.