(ii) The site of fertilisation in human beings is in the fallopian tube of female reproductive system. 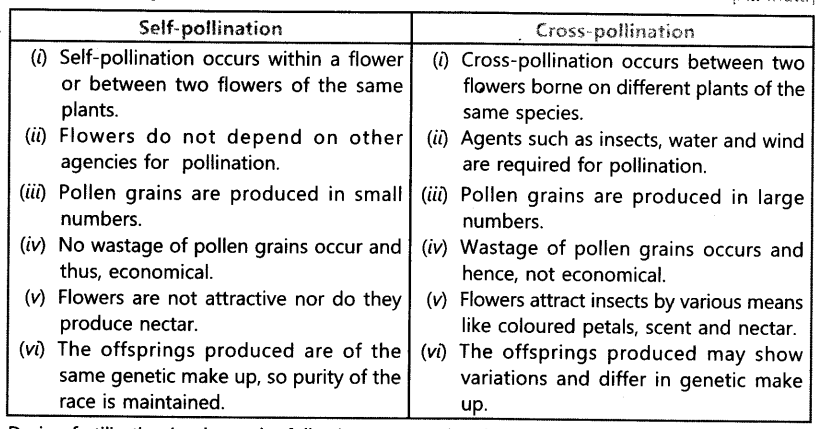 Question.6 “Variations that confer an advantage to an individual organism only will survive in a population.” Justify.
Answer. It is because the chances of survival depend on the nature of variations and different individuals have different kinds of advantages.
For example, a bacteria that can withstand heat will survive better in a heat wave, i.e. the organisms that are fit in the competitive environment and with great variations will be able to survive and adapt. Thus, more offsprings and population with genetic variations will survive.

Question.8(a) In the human body what is the role of
(i) seminal vesicles, and (ii) prostate gland?
(b) List two functions performed by testis in human beings.
Answer. (a) The role of seminal vesicles and the prostate gland are as follows:
(i) Seminal vesicles produce seminal plasma which is in the form of fluid makes the transport of sperms smooth.
(ii) Prostate gland secretes prostatic fluid that keeps the sperms alive and helps them to swim vigorously.
(b) Two functions performed by testis
in human beings are as follows:
(i) Formation of sperms takes place in testis.
(ii) They secrete the hormone testosterone which regulates the formation of sperms and brings changes in appearance of boys at the time of puberty.

Question.9 Illustrate the following with the help of suitable diagrams:
(i) Regeneration in Planaria.
(ii) Budding in Hydra.
Answer. 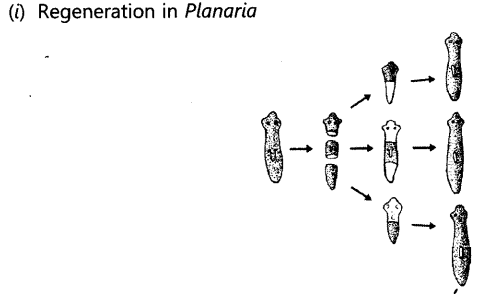 Question.10 Illustrate the following with the help of suitable diagrams:
(i) Binary Fission in Amoeba.
(ii)Leaf of Bryophyllum with buds.
Answer. 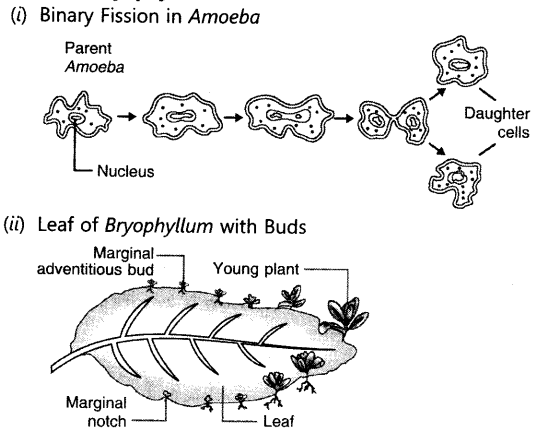 Question.11 Illustrate the following with the help of suitable diagrams:
(i) Spore formation in Rhizopus.
(ii)Multiple fission in Plasmodium.
Answer. 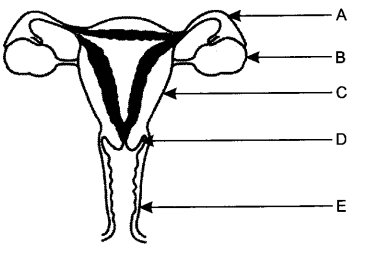 Question.13 (a) Draw a diagram showing germination of pollen on stigma of a flower.
(b) Label pollen grain, male germ- cells, pollen tube and female germ-cell in the above diagram.
(c) How is zygote formed?
Answer. (a) and (b) 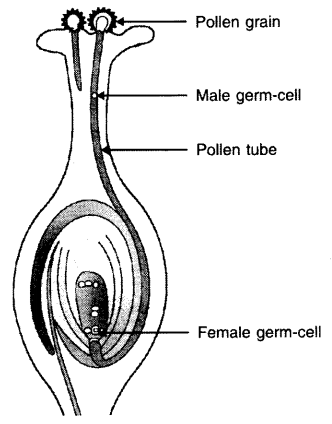 Question.21(a) Explain the terms:
(i) Implantation (ii) Placenta
(b) What is the average duration of human pregnancy?
Answer. (a)
(i) Implantation: The embedding
of a fertilised mammalian egg (embryo) into the inner thick wall of the uterus (womb) where it will continue its development is called implantation.
(ii) Placenta: It is a complex double-layered spongy vascular tissue in human female formed by the joint activity of maternal and foetal tissues in the wall of uterus that is meant for attachment, nourishment and waste disposal for the foetus.
(b) The average duration of human pregnancy is 40 weeks or 280 days.

Question.22 What are sexually transmitted diseases?
Name four such diseases. Which one of them damages the immune system of human body?
Answer. Sexually Transmitted Diseases (STDs) are the diseases which are spread by sexual contact from an infected person to a healthy person. They are caused by various microorganisms that live in warm and moist environments of the vagina, urethra, anus and mouth.
The four sexually transmitted diseases are:
(i) Gonorrhoea
(ii) Syphilis
(iii) Trichomoniasis
(iv) AIDS (Acquired Immune Deficiency Syndrome).
AIDS damages the immune system of human body.

Question.23 List any four reasons for vegetative propagation being practised in the growth of some type of plants.
Answer.
(i) Vegetative propagation is a cheaper, easier and more rapid method of propagation in plants than growing plants from their seeds.
(ii) Better quality of plants can be maintained by this method.
(iii) It results in propagation of those plants which do not produce viable seeds or produce seeds with prolonged period of dormancy.
(iv) The plants generated from vegetative means are more uniform and genetically similar to the parent stock. 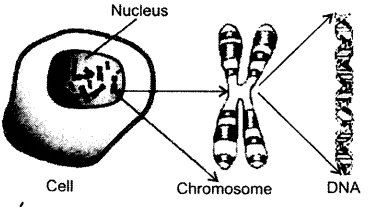 DNA plays an important role in the reproduction of a cell. The reproducing cell produces an identical copy of DNA through some cellular mechanism. Since the newly formed copy of DNA lacks an organised cellular structure, the cell gets divided to provide cell cover to the newly formed DNA. Thus, two daughter cells are formed from the single cell as a result of the copying of DNA.

(i) Vegetative propagation is a cheaper, easier and more rapid method of propagation in plants than growing plants from their seeds.
(ii) Better quality of the plants can be maintained by this method.

Question.26 List any three differences between pollination and fertilisation.
Answer. 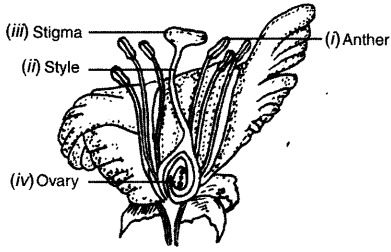 Question.28 (a) Explain the role of placenta in the development of human embryo.
(b) Give example of two bacterial and two viral sexually transmitted diseases. Name the most effective contraceptive which prevents spread of such diseases.
Answer.
(a) Role of placenta in the development of human embryo: A special tissue develops between the uterine wall and the embryo (foetus) called placenta, where exchange of nutrients, glucose and oxygen takes place. The developing embryo will also generate waste substances which can be removed by transferring them into the mother’s blood through the placenta. The development of the child inside the mother’s blood takes approximately nine months.
(b) Sexually transmitted diseases (STDs) transmitted by bacteria are:
(i) Gonorrhoea (ii) Syphilis
STDs transmitted by virus:
(i) AIDS (ii) Genital warts
The most effective contraceptive which prevents the spread of these diseases is by the use of mechanical barriers such as physical devices like condoms.

Question.29 Write any two differences between binary fission and multiple fission in a tabular form as observed in cells of organisms.
Answer.

Question.33 What does HIV stand for? Is AIDS an infectious disease? List any four modes of spreading AIDS.
Answer. HIV stands for Human Immunodeficiency Virus.
Yes, AIDS is an infectious disease.
Four modes of spreading AIDS are as follows:
(i) By having sexual contact with an infected person.
(ii) By the transfusion of blood from an infected person.
(iii) Through infected needles used for injection.
(iv) Through the placenta from the mother to child during pregnancy.

Question.36 Explain the following methods of contraception giving one example of each:
(i) Barrier method
(ii) Hormonal imbalance method
(iii) Surgical method.
Answer.
(i) Barrier Method: In this method, physical devices such as condoms, diaphragm and cervical caps are used. These devices prevent the entry of sperm in the female genital tract during copulation, thus acting ‘ as a barrier between them.
(ii) Hormonal Imbalance Method: In
this method, specific drugs are used by females, which are of two types: oral pills and vaginal pills.
Oral pills contain hormones which stop the ovaries from releasing ovum into the fallopian tube. These pills are also called oral contraceptives (OCs) which act by changing the hormonal balance of the body so that eggs are not released and fertilisation cannot occur. The use of Intrauterine Contraceptive Devices (IUCDs) prevents implantation in the uterus. This device is copper-T placed safely inside the uterus by a doctor or nurse.
(iii) Surgical Method: In this method, a small portion of vas deferens in male and the fallopian tube in ‘ female is surgically removed or tied. It is called vasectomy in males and tubectomy in females. In this case, if the vas deferens in male is blocked, sperm transfer will be prevented and if the fallopian tube in the female is blocked, the egg will not be able to reach the uterus, thus fertilisation will not take place.

Question.37 (a) What is fragmentation in organism?
Name a multicell-ular organism which reproduces by this method.
(b) What is regeneration in organism? Describe regeneration in Planaria with the help of a suitable diagram.
Answer. (a) Fragmentation: Multicellular organisms with simple body organisation such as filamentous algae-Spirogyra breaks up into two or more small pieces or fragments upon maturation. These fragments grow into new individuals. 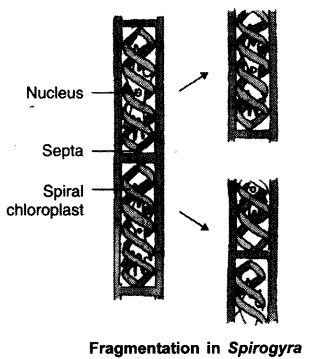 (b) Regeneration: It is the ability of a fully differentiated organism to give rise to new individual organisms from its body parts.

Question.38 With the help of suitable diagrams, explain the various steps of budding in Hydra.
Answer.

Question.39 (a) What is spore formation?
(b) Draw a diagram showing spore formation in Rhizopus.
(c) List two advantages for organisms
to reproduce themselves through spores.
Answer.
(a) When a slice of bread is kept in moist dark place for a few days, spores of Rhizopus present in air settle on the bread to form new fungus plants of Rhizopus.
(b) The Rhizopus consists of fine thread-like projections called hyphae. It has a knob like structure which is involved in reproduction called sporangia, containing spores, that develop into new Rhizopus. 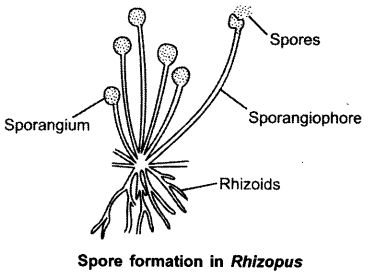 (c) Two advantages for organisms to reproduce themselves through spores are as follows:
(i) It is a faster mode of reproduc-tion.
(ii) Offsprings produced are identical.

Question.48 List the parts of human male reproductive system which contribute fluid to the semen. State two advantages semen offers to the sperms.
Answer. Prostate glands and seminal vesicles add fluid in the vas deferens. This makes transportation of sperms easier and also provides nutrition to the sperms.

Question.51 What is AIDS? Which microbe is responsible for AIDS infection? State one mode of transmission of this disease. Explain in brief one measure for the prevention of AIDS.
Answer. AIDS is the Acquired Immune Deficiency Syndrome.
It is caused by a virus called Human Immunodeficiency Virus.
AIDS is transmitted by sexual contact with an infected person.
AIDS can be prevented by avoiding sexual contact with infected person or by using condom during sex.

Question.53 Draw a diagram of a human female reproductive system and label the part
(i) that produces egg
(ii) where fusion of egg and sperm take place
(iii) where zygote is implanted
What happens to human egg when it is not fertilised?
Answer. 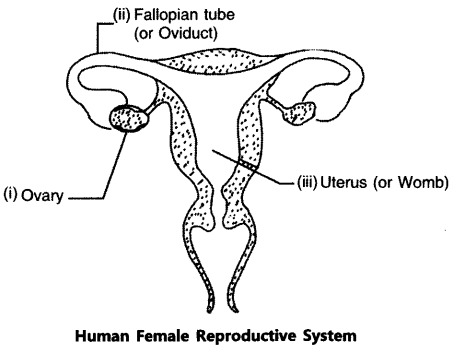 If the egg is not fertilised, the thick and nourishing lining of the uterus breaks and comes out through vagina as blood and mucous.

Question.54 State in brief the changes that take place in a fertilised egg (zygote) till birth of the child in the human female reproductive system. What happens to the egg when it is not fertilised?
Answer. The egg gets fertilised in the oviduct. The fertilised egg, the zygote gets implanted in the lining of the uterus and starts dividing. The uterus prepares itself every month to receive and nurture the growing embryo. The lining thickens and is richly supplied with blood to nourish the growing embryo.
The embryo gets nutrition from the mother’s blood with the help of a special tissue called placenta. The development of the child inside the mother’s body takes approximately nine months. On completion of 9 months, the child is born as a result of rhythmic contractions of the muscles in the uterus.
If the egg is not fertilised, the thick and nourishing lining of the uterus breaks and comes out through vagina as blood and mucous.